RIVER NORTH — Nouveau Tavern, the River North nightclub that has long been at odds with its landlord, alderman, and many neighbors, has been forced to close its doors once again as it fights an eviction order.

Nouveau Promotional Director Teddy Gilmore posted a video to Facebook on Thursday evening saying the Southern-style bar and restaurant at 358 W. Ontario St. will be closed until April 16 after receiving a "drug and gang ordinance nuisance" notice from City Hall.

"We’ve agreed to close seven days so we can figure out our next move as far as how we plan on dealing with this issue," Gilmore said in the video. "I don't agree with it, but it's something, for the betterment of Nouveau, we decided we had to do."

Management also posted a notice to the Nouveau's front window: 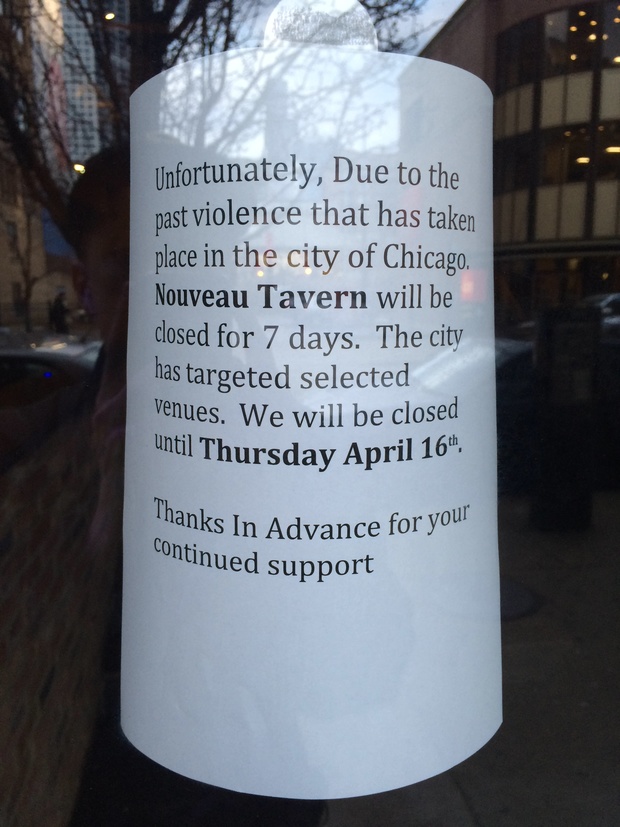 Gilmore, who along with Nouveau owner Marsette Mangum did not return messages, makes the closure sound voluntary, but Cook County court records show the city of Chicago filed a housing complaint against the nightclub earlier this month. The city, whose lawyers also did not return messages, can take swift legal action for properties deemed a public nuisance through its Drug and Gang House ordinance, though no drug charges have been filed in association with Nouveau.

"It has nothing to do with gangs or drugs," Gilmore said in the video. "It’s simply [City Hall] saying that we’re a nuisance because of bar incidents: people with disorderly conduct, which happens at every bar in the city of Chicago."

Unfortunately, due to the past violence in the city. NOUVEAU TAVERN will be closed for 7days. The city has targeted select venues. We will be closed until Thursday April 16th. Thanks in advance for your continued support.

The tavern is closing its doors as its managers attempt to appeal an eviction order they received earlier this year from their landlord. Nouveau was also briefly shut down by Chicago police over a licensing issue last year. Gilmore has long maintained that the business is unfairly "targeted" by police and other authorities because of its black ownership and mostly black clientele, a stance he reiterated in the Facebook video.

Tension grew especially high in August when a racist message was spray-painted onto the club's exterior. Nouveau patrons are also asked to not walk west on Ontario Street when leaving the club.

"We're down here. We're fighting. We believe we have a right to be here," Gilmore said in the video. "We’ve done everything possible to make sure that this is a great establishment, and we continue to meet with people who don’t want us to be here and it’s taken a whole different level now."