NORWOOD PARK — Firefighter Anthony Napolitano might be a bit lonely once he takes office as alderman of the 41st Ward.

Napolitano, who defeated Ald. Mary O'Connor with 51.96 percent of the vote, will become the lone Republican on the Chicago City Council, according to unofficial results Wednesday from the Chicago Board of Election Commissioners.

Napolitano isn't a typical Republican by any measure. The police officer-turned-firefighter won with the help of the Service Employees International Union, which paid for approximately $80,000 worth of negative ads blasting his opponent as bad for working families during the runoff campaign.

In addition, Napolitano campaigned with Cook County Clerk David Orr — considered by many to be the dean of Chicago's progressive movement — and touted the endorsement of the Chicago Teachers Union in the final days of the campaign before Tuesday's winner-take-all runoff.

Napolitano is considering joining the City Council's Progressive Caucus, co-founded by the only other firefighter on the council, Ald. Nicholas Sposato (36th), who won election in February as the alderman of a redrawn 38th Ward.

Chris Cleveland, the vice chairman of the Chicago Republican Party, said he was "ecstatic" about Napolitano's victory — while acknowledging that it was unusual for a Republican to campaign with the backing of unions like the SEIU and CTU.

"We're confident that [Napolitano] will make the right decisions when it comes to dealing with public-sector employee unions," Cleveland said. "He will protect the pensions, but address the city's dire financial situation in a realistic way."

Napolitano said he supported a large Las Vegas-style casino Downtown to bring in new revenue for the city, and also wanted the city to sell the vacant and abandoned land it owns to add to the city's coffers.

In addition, he says the city should use some of the $1.7 billion in its Tax Increment Financing District funds to address the "major crisis" created by the state Legislature's requirement that the city make a $550 million pension payment to police and fire pension systems by 2016, which would force officials to either drastically cut services, raise taxes or borrow a significant amount of money.

The SEIU supported O'Connor in 2011, but backed Napolitano this time around after the sitting alderman voted against a plan to hike the minimum wage and failed to back their campaign against the elimination of union jobs at O'Hare Airport. 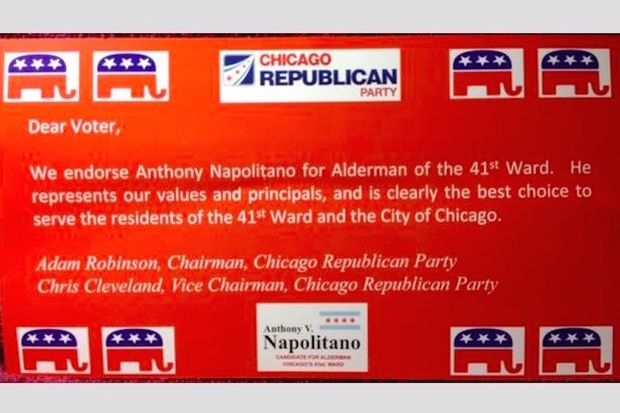 The Chicago Republican Party sent out mailers touting their support for Anthony Napolitano in the 41st Ward race.

It is not unusual for the SEIU to endorse Republicans that support policies that protect and help working families, said SEIU State Council Executive Director Gerald Morrison.

"[Napolitano] told us he will vote like Nick Sposato," Morrison said. "That's when we decided a Republican firefighter would be better than the Democratic alderman."

Napolitano's victory means the 41st Ward — home to some of Chicago's most affluent neighborhoods and a large percentage of city employees — is returning to its natural state as a Republican enclave in the otherwise overwhelmingly Democratic city of Chicago, Cleveland said.

But the news wasn't all good for Windy City Republicans. Chicago Police Lt. John Garrido lost his rematch against Ald. John Arena (45th), who won a second term on the council with 56 percent of the vote.

"We didn't work as closely with Garrido as we did Napolitano," Cleveland said. "We wanted to support him, but Garrido didn't think that was the way to go."

Garrido, who ran for Cook County Board president in 2009, campaigned as an independent, saying party affiliation was irrelevant in the nonpartisan City Council election.

The SEIU disagreed and spent $187,700 during the six-week runoff on television ads and fliers urging 45th Ward residents to vote against Garrido because of his ties to the Tea Party wing of the Republican Party and support for pro-gun legislation such as concealed carry.

Napolitano follows in the footsteps of former 41st Ward Ald. Brian Doherty, who was the only Republican on the City Council throughout his 20-year term. Doherty served as an adviser and a volunteer for Napolitano.

In an email conceding the race to Napolitano Tuesday night, O'Connor, who is the ward's Democratic committeeman, reiterated her implied criticism of Doherty's long tenure. The 41st Ward was an "afterthought" at City Hall until she took office, O'Connor said.

Doherty said Tuesday that Napolitano's victory was a vindication of his time in office.

Although Napolitano won by just 723 votes, he carried 30 of the 47 precincts in the 41st Ward, winning areas throughout the ward, the largest in the city, which includes Norwood Park, Edgebrook, Edison Park and O'Hare.