SAUGANASH — Ald. Margaret Laurino (39th) said she would renew her focus on public safety and work to boost the ward's economy after escaping a runoff by just 360 votes.

Laurino said she was surprised by the number of residents who told her they no longer felt safe in their homes and neighborhoods, despite the fact that the 39th Ward is among the safest areas in the city based on crime statistics.

"We need to do more to combat the perception that crime is rising," Laurino said in her first interview after the Feb. 24 election, which returned her to the City Council, where she currently serves as president pro tem. "I will sit down with the commanders of the Albany Park and Jefferson Park police districts and assess this issue." 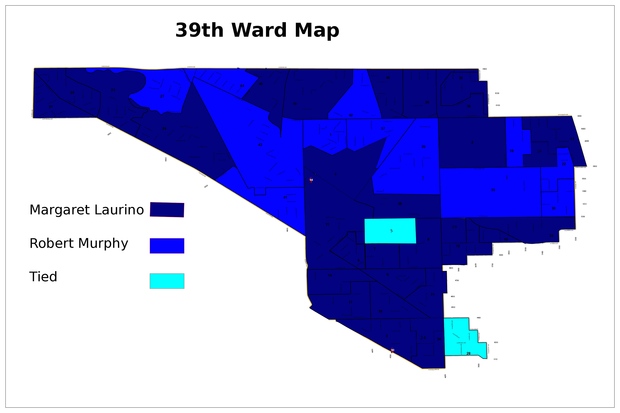 Murphy said he would remain active in the 39th Ward, which includes Sauganash and parts of Albany Park, North Park, Hollywood Park, Mayfair, Edgebrook, Gladstone Park and Forest Glen. He transformed his campaign Facebook page to a community page, and said he would share updates, messages, issues of concern and "general good news."

Heather Cherone says Laurino was surprised at the close race:

Murphy said he would hold Laurino accountable to ensure she delivered on her campaign promises of increased communication, transparency and stepped-up economic development in the 39th Ward.

"When I announced my campaign, I was told it was a fool's errand," Murphy said, referring to the Laurino family's control of the seat since 1965. "But I could have beaten the machine. To me, that's a poor showing from the machine."

Murphy said it was "frustrating and humbling" to have come so close to forcing Laurino into a runoff despite getting into the race relatively late. He declined to rule out another run for the council in four years.

In two precincts, one in North Park and one in Irving Park, Laurino and Murphy received the same number of votes, results show.

Murphy won precincts across the middle of the ward, north of Foster Avenue, including several Sauganash precincts that had been Laurino strongholds. 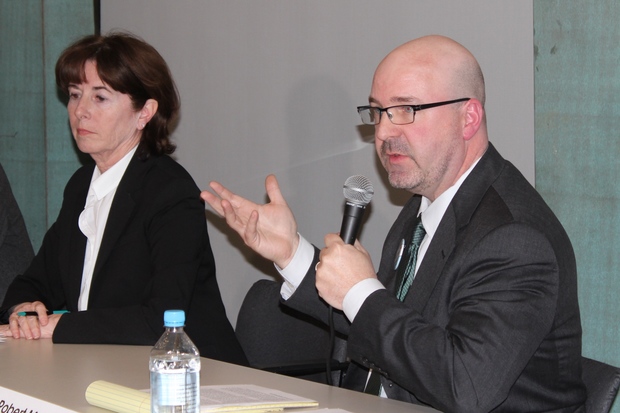 Murphy said he would work for "positive change in the 39th Ward" and urged Laurino to listen to the 47 percent of the voters who did not vote for her.

And while the 39th Ward aldermanic race may be officially over, Murphy said he has serious concerns about how it was run.

The number of problems at the polls on Election Day was "unbelievably disturbing, chaotic and dysfunctional," Murphy said.

In a number of precincts, documentation for votes cast was missing or improperly prepared by election judges that made "ascertaining the evening's outcome ... suspect," Murphy said.

Jim Allen, a spokesman for the Chicago Board of Election Commissioners, said election officials thought the 39th Ward election "went rather smoothly" and was "fairly orderly."

Even if some paperwork wasn't properly completed, all votes cast were counted and properly recorded, Allen said.

"We have a paper trail for every ballot," Allen said.

Murphy's campaign submitted a "voluminous" Freedom of Information Act Request to the elections board for records that must be narrowed down before officials can respond, Allen said.

Laurino has represented the 39th Ward since 1994, when she was appointed to the City Council by former Mayor Richard M. Daley to replace her father, who retired after being indicted in a ghost payrolling scheme.

Although she survived a 1995 runoff in her first bid for a full term on the council, Laurino faced only nominal opposition since then. In 2011, she won re-election with 76.3 percent of the vote.

The economy was better in the 39th Ward four years ago, Laurino said — and the mayoral race between her ally Mayor Rahm Emanuel and Cook County Commissioner Jesus "Chuy" Garcia was much closer than last time around, she added.

It is "hard to say" whether Emanuel's support helped or hurt her, Laurino said.

Residents of the 39th Ward have also been among the hardest hit by the blanket of jet noise that has covered the Far Northwest Side after a new east-west runway opened at O'Hare Airport.

Murphy helped found the Fair Allocation in Runways Coalition, which has blasted Emanuel for not doing more to reduce the racket that many residents say has significantly reduced their quality of life. During the campaign, Murphy said he would do a better job tackling the issue.