"The one thing I realized about hockey: I never complain about practice. I'm always excited for it," said Zarzecki, of Beverly. "That says a lot about the sport. Not only do I love the games, I love preparing for it. It's just something I've always enjoyed."

Zarzecki's true love for the sport has taken the 18-year-old Whitney Young senior places. She's been a key member of the Team USA under-18 squad in a pair of U18 World Championships and hopes to make the national team for the 2018 Olympics. 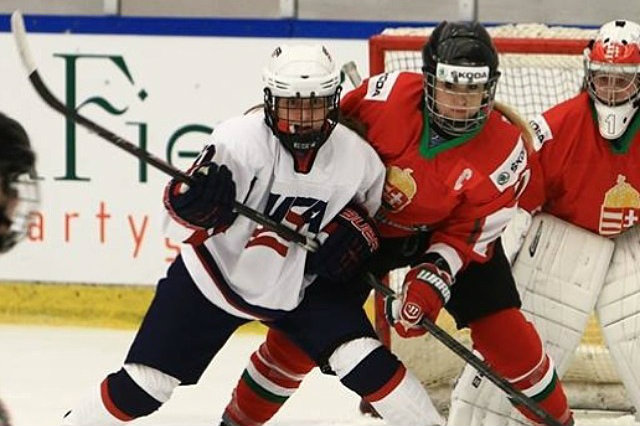 Later this year, she'll compete for Harvard University's Division I hockey team. Next week, Zarzecki will be participating in Green Bay Tier I USA Nationals with her Chicago Mission club team. And Sunday morning, as a member of the Latin School of Chicago's hockey team, Zarzecki will be playing in the high school state championship game against Loyola at United Center.

"She is one of the most talented players I have seen on the ice, [and] I have watched and played against a lot of talented players," said Latin co-coach Courtney O'Connor, who attended Loyola and played Division I at Clarkson University. "Grace is so much fun to watch, whether she is trying to set up her linemate in her first hockey game ever, or scoring a highlight goal herself."

Latin is a combined team of players from Latin, Lab Schools, Whitney Young, Lane Tech and Jones College Prep. When Zarzecki joined the club three years ago, it won only a handful of games. But Latin improved to 21-4-4 Tuesday after blanking New Trier 5-0 in a state semifinal.

Justin Breen says Zarzecki has been a star this year:

Much of the credit could be given to Zarzecki, who has 32 goals this season for Latin, which utilizes several players who only recently tried on skates.

"Three years ago we weren't very good," said Zarzecki, a forward who was named the state's girls player of the year earlier this month. "Looking back on that, we've come so far. I love the coaches and I love the kids on this team. It's great to be around people playing hockey because they love it. And it's fun."

Tom Mandarino, Zarzecki's assistant coach with the Mission — a team made up of mostly all-star-level players — said she "has the ability to take games over" and is a "fierce competitor that possesses one of the hardest shots in the country."

"Her talent is only surpassed by her work ethic," Mandarino said. "Grace is a special player."

O'Connor and Mandarino said they wouldn't be surprised to see Zarzecki representing the United States in future Olympic Games. And while Zarzecki said donning the Team USA's red-white-and-blue uniform is by far her No. 1 goal, she knows there's still work to be done.

"If there's any one thing I want to do in life, that's it," Zarzecki said. "Literally making that team would be a dream come true. But I have to play my cards right, and I have to keep improving. Where I'm at now is not good enough, but where I'm at in a few years ... maybe that will be good enough."

The Illinois high school girls state title game is at 9 a.m. at the United Center. Tickets are $5. For more information, click here.