Al's Italian Beef Opens in Texas ... And People There Go Nuts for It

Texans have gone bonkers over Chicago "beef" — the famous Italian beef sandwiches from Al's Italian Beef on Taylor Street, that is.

When the state's first Al’s Italian Beef franchise opened in suburban Dallas last month, a contingent of energized Chicago ex-pats and their pals ordered so many Italian beef sandwiches — not to mention Chicago hot dogs, sausages and tamales — that the place completely ran out of food. It was so busy it had to shut down early every worknight and close all day on Sunday during its first week in business.

Al’s Beef franchiser Essa Zedan, an Orland Park native living in Texas, said he had an inkling that Texans would appreciate a joint hawking authentic Chicago food when he decided to bring a taste of Taylor Street to the Lone Star State.

“They say things go big in Texas. But our opening went f------ huge. We broke every Al’s record. Not just daily [sales] records. Hourly records. Every single record in their history,” Zedan said. “We’re the No. 1 location since we opened up.” 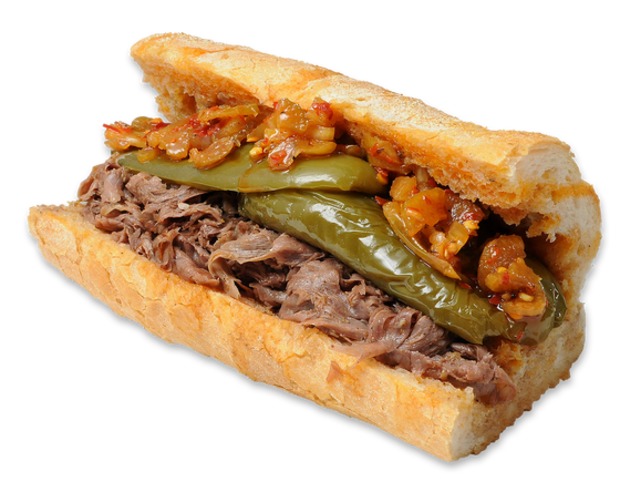 Lines stretching out the door and around the building were packed with former Chicagoans who seemingly rounded up every person they knew and brought them to Al’s for a taste of a true Chicago delicacy — thinly sliced beef, dry roasted in a blend of secret spices and piled high on an Italian roll, soaked in gravy and topped with peppers.

“We had people in line ordering $600 and $700 of food on a single ticket. And there would be six of those orders in line at the same time,” Al’s Beef marketing director Brian Curry said. “I was there. It took 45 minutes to an hour to get a beef sandwich. Guys ordered 50 tamales. We couldn’t even keep that many tamales warm. People didn’t care, they asked for them frozen.” 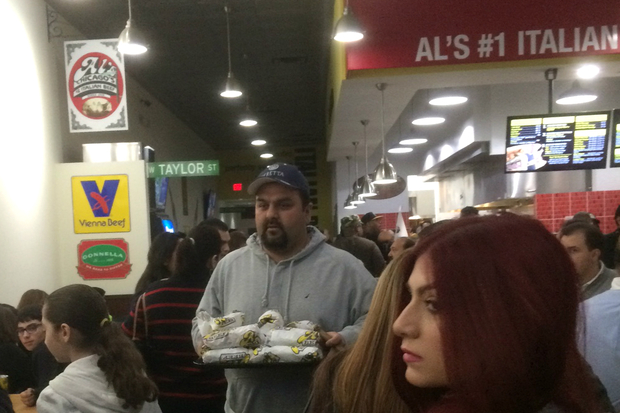 This guy needed more than one beef. (Photo courtesy of Brian Curry)

Zedan said folks in line all wanted to shake his hand and ask him the same questions, “Are you really from Chicago? Is this the real Al’s Beef from Taylor Street?

“And I could tell them, ‘Yeah, it’s the same product, the beef, hot dogs, Polish sausage, Italian sausage, all shipped from Chicago.’ And people were so happy. One guy who wouldn’t stop shaking my hand said he hadn’t had an Al’s Beef in 10 years. It was a great feeling.” 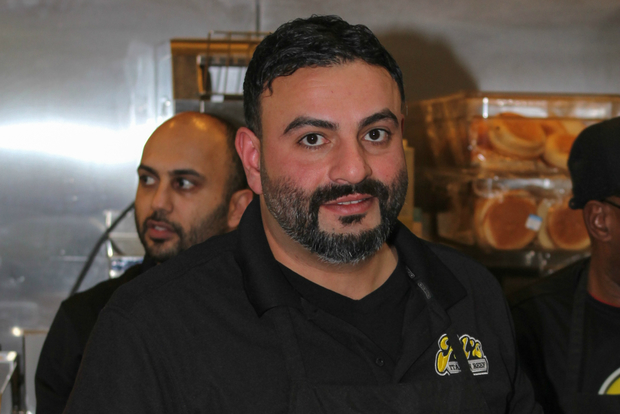 With so many ex-Chicagoans standing in line for so long, the suburban Dallas Al’s Beef outpost started to feel a little like a rowdy line back home in the Windy City.

“I don’t know where all those Chicago people came from, but there were a frightening number of Chicagoans in line,” Curry said. “Guys in Sox hats giving Cubs fans crap, and Bears fans making fun of guys in Tony Romo jerseys.”

There were even a few customers with Chicago accents who came to the restaurant three times a day during the first week, acting as culinary tour guides, giving groups of co-workers, friends and family the chance to experience one of Chicago’s most famous fast-food traditions.

“They said it was an honor to bring people who never had a real Chicago hot dog or beef sandwich,” Curry said. “I don’t know how they ate so much beef.”

For the first several days the store was open, the store ran out of every bit of food — all the beef, sausage, hot dogs and tamales that could fit in the place.

Indeed, the grub was selling so fast that Zedan had to order a semi filled with food every day and keep extra in off-site storage just to so the restaurant didn't have to close early.

Carrie Fisher's Tale Of Nearly Dying, Then Falling In Love, In Chicago