How Did Your Pocket of the 43rd Ward Vote? A Deeper Look at the Runoff

LINCOLN PARK — As the 43rd Ward election heads to a runoff, Ald. Michele Smith and challenger Caroline Vickrey are attempting to sway the support of their previous opponents.

Smith has gained the backing of former challenger Jerry Quandt, but Jen Kramer has yet to decide who she will be backing in the race.

Those votes could be critical for Smith and Vickrey, as Kramer received about 17 percent of the vote compared to Quandt's 6 percent.

Smith and Quandt announced their partnership last week as well as Smith's new campaign manager for the runoff, Sean Tenner.

Quant will join Smith's team in a communication and outreach role and will remain working with Smith after the election, according to Quandt.

An analysis of polling data shows that Vickrey's strongest support came from the areas surrounding both the site of the former Children's Memorial Hospital and Lincoln Elementary.

Opponents of the deal Smith reached for the redevelopment of Children's Memorial Hospital came out strong against the alderman, according to election data, but Smith won in two-thirds of the precincts in the ward.

In the 21st precinct, bordered roughly by Halsted, Fullerton, Wrightwood and Geneva Terrace, Vickrey received 70 percent of the vote.

Smith, despite the backing of Mayor Rahm Emanuel's Chicago Forward Super PAC, was unable to obtain 50 percent of the total vote, which forced the April 7 runoff.

The contest between Smith and Vickrey could be decided by the roughly 23 percent of voters who voted for the other two candidates, Kramer and Quandt.

Smith and Vickrey were separated by 6 percentage points when the polls closed Feb. 24, with Smith leading at 42 percent of the vote.

Ward-wide, Smith was the top vote getter in 31 precincts. Vickrey won the remaining 15.

The two candidates have been butting heads for the past two-plus years over two of the biggest issues that faced the ward: the redevelopment of the six-acre hospital site and the overcrowding issue at Lincoln Elementary.

Vickrey was serving on Lincoln Elementary's local school council when Smith announced she would hold up any plans to redevelop the hospital site without a fix for the overcrowded elementary school.

Smith and Emanuel held a surprise announcement of the Lincoln Elementary annex in November 2013 and on the same day Smith announced a meeting set for two weeks later where the Children's Memorial development plans would be unveiled.

Those plans for the former hospital property, while scaled back over a period if months, were too tall and too dense, opponents said. Likewise, some objected to the plan for Lincoln, where a school annex is being built on top of the former playlot. A replacement play lot is being constructed on the school's roof.

During the campaign, Smith accused Vickrey, an opponent of the Lincoln annex, of being against expanding educational opportunities in the neighborhood. Vickrey said that there were other options to address overcrowding and that open seats at other schools within the neighborhood were available.

Kramer, who received about 17 percent of the vote, said she has been in discussions with both candidates and has not made a decision whom she will back. It is possible that she will remain neutral.

"Right now, I'm an undecided voter and I'm watching both candidates very closely to see what their future plans are for our community," Kramer said.

Quandt, on the other hand, has a history of opposing views with Vickrey from their time together on the Lincoln Elementary Local School Council, and has sided with Smith.

Quandt hopes to improve a recognized communication gap between Smith's office and her constituents during the rest of the campaign and during her next term if re-elected.

"We've talked about bridging the gap that Michele has recognized she needs to be better at," Quandt said. "This isn't just for the campaign. This is a partnership that will hopefully live beyond the campaign and into the relationship post election."

Quandt said it has yet to be determined if he will be a paid staffer during the campaign.

Smith said she recognized the message of unity Quandt exemplified on the campaign trail and reached out to him to see if he would join her as a partner on the campaign.

"He agreed to work together and our neighborhoods will be stronger as a result," Smith said. "This type of collaboration is the backbone of successful government."

Quandt met with both candidates following the general election and decided to back Smith. 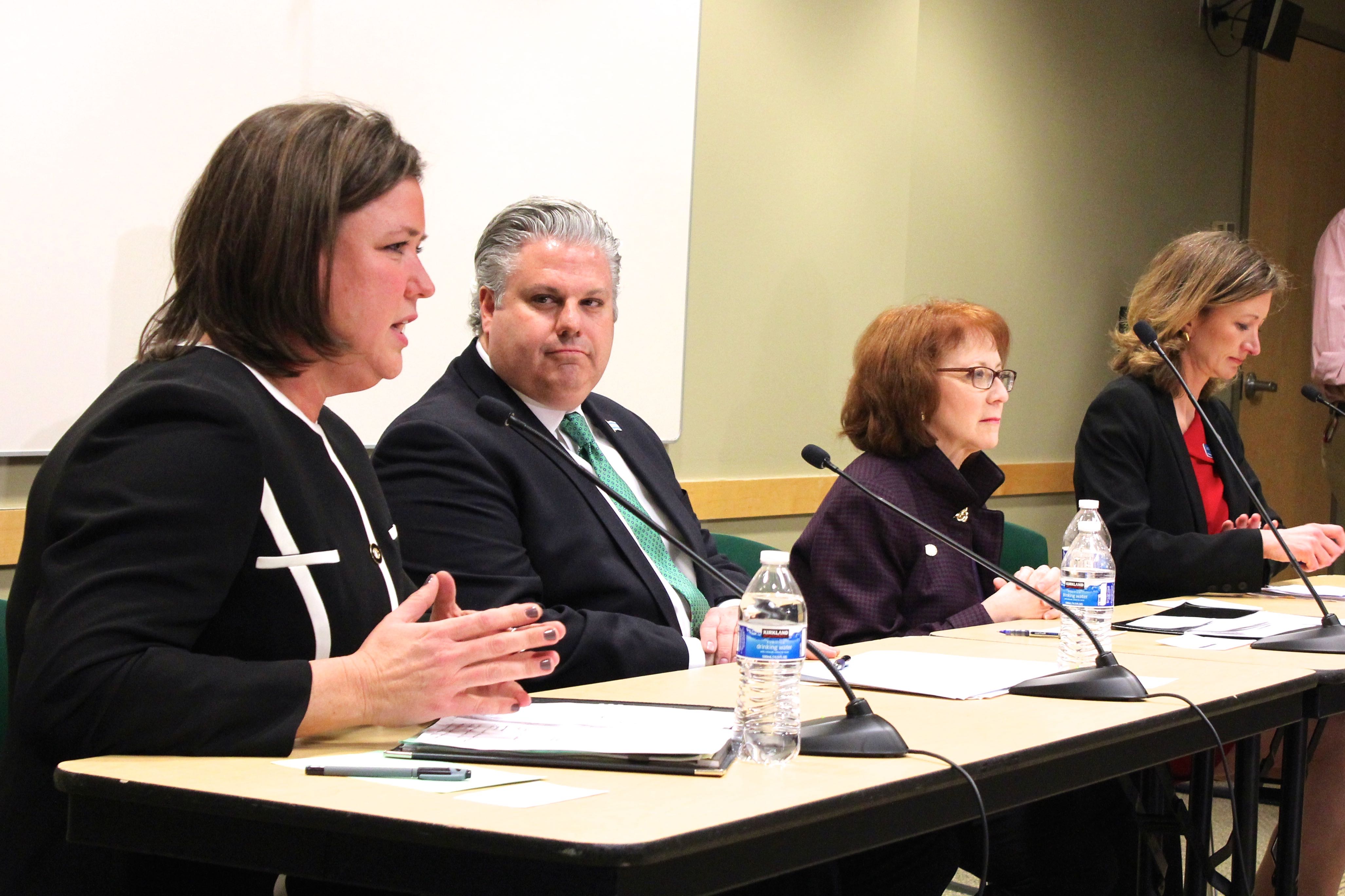 During the course of the campaign, all three challengers took shots at Smith.

Vickrey has called for the creation of a community zoning board to discuss ward development issues.

Smith said the process would actually limit the involvement of people in the ward.

On the topic of Lincoln Elementary, Vickrey lashed out at Smith during an Old Town debate telling the alderman "you owe me an apology" over charges that Vickrey doesn't support local schools.

During the same debate, Vickrey ripped Smith for missing a vote that limited the City Council Inspector General from investigating alderman's campaign finances in July.

Smith was the only alderman to miss the vote, and in an email to constituents she said she was called off the floor to discuss another legislative matter when the vote happened. She intended to vote no, Smith added.

Vickrey pointed out that Smith voted yes on the measure that same morning in committee.

"I would not go back to my constituents and tell them I did something other than what I did in committee," Vickrey said. "I would tell them the truth."

In an earlier debate, Smith said she missed the vote because she was tardy to the council meeting.

"I'm one of the leaders in City Council on ethics reform," Smith said during a January debate hosted by the Ranch Triangle Association. "Since I've begun in office I've been pushing to have the inspector general have full power over all the alderman."

Smith will likely look to Emanuel for more support, as the mayor has consistently backed her campaign up until this point.

Emanuel attended a kickoff reception for Smith in October at the home of private equity exec Don Edwards, during which Smith raised close to $100,000.

The 43rd Ward voted heavily in Emanuel's favor during the February contest, giving the mayor 72 percent of the vote compared to 18 percent for Jesus "Chuy" Garcia.

Emanuel will be engaged in a runoff of his own.

The aldermanic runoff will be the third Smith faces since 2007 and Vickrey's first, as this is her first run for office.

In her first run for alderman in 2007 Smith was the second highest vote getter during the election and lost in a runoff with Vi Daley, 46 percent to 54 percent.

In that race the voter turnout dropped from 9,307 in the main election to 8,321 in the runoff.

In 2011 nine candidates ran in the 43rd and Smith was the top vote-getter by far in the main race, gathering 38 percent of the vote to Tim Egan's 29 percent.

Smith defeated Egan in a tight runoff, winning 51 percent of the vote to Egan's 49.

Residents who did not vote in the main election are still eligible to vote in the runoff.

Unregistered voters can register up through March 10 and early voting will begin March 23.