Loop 'Connector' Plan Back From the Dead, Again

THE LOOP — A big ghost of urban planning past is returning to Chicago.

The Loop "Connector," an ambitious public transit plan that has been discussed and discarded by city officials for decades, is the subject of a new report being developed by the University of Illinois at Chicago and the Chicago Central Area Committee, a Downtown planning group.

The Connector, which was first proposed in the 1970s, would connect the east and west sides of the Loop via train, and add new stations at presently unconnected destinations, including Navy Pier and the Museum Campus.

Currently, most of Downtown's rail transit system runs north and south. Tens of thousands of workers and visitors from Union and Ogilvie Metra stations trying to move east and west walk or take buses that often get bogged down in traffic.

David Matthews discusses the broad strokes of the plan:

"It's been recognized we need to do this for 30 or 40 years," said Jon DeVries, director of the Marshall Bennett Institute at Roosevelt University, and a co-author of "Planning Chicago."

The idea was last proposed in 2009 as part of the city's Central Area Action Plan, but a "perfect tsunami" of events, including the recession, Chicago's failed Olympic bid, and the twilight of the Richard M. Daley administration doomed the proposal, DeVries said.

Now, with the economy improving and Chicago's Downtown population booming, people like DeVries and O'Brien believe now is the right time to pursue the Connector again. Businesses, including the Merchandise Mart, developer Fifield Cos., and law firm Bryan Cave LLP agree, donating money to the study and joining its steering committee. The federal government has also granted the study roughly $50,000, matching private donations, O'Brien said.

"To me, the Connector is one of many improvements the city can do to keep it competitive amongst all other major metropolitan cities long term," developer Steven Fifield said.

O'Brien said the group aims to present its findings, with transportation and project financing recommendations, within six months, with periodic benchmark reports along the way. Until then, a trove of prior research suggests which parts of Downtown are the most underserved by public transportation.

Build it and they will come? 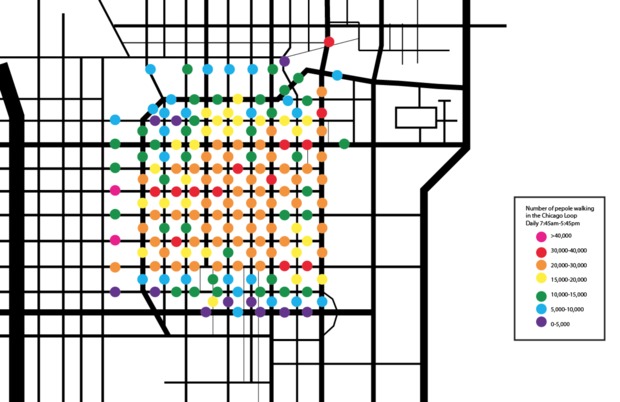 As of 2008, Metra brought 165,000 people to the Loop every weekday, a higher volume than the "L," said Alex Francis Burchard, an undergraduate architecture student at the Illinois Institute of Technology who is specializing in transportation issues.

Though developers have built a bevy of office towers near Metra hubs like Ogilvie Transportation Center and Union Station, many suburban commuters still are forced to walk east across the Loop to work, Burchard said. Nearly 75 percent of Metra commuters walk to work after arriving Downtown via Metra, he said.

A Streeterville resident, Burchard also knows the pain of getting to the South Side IIT campus from his home near Navy Pier, the state's largest tourist attraction. The closest Green Line stop is at Randolph and Wabash, and the closest Red Line station is at Grand and State.

"I always thought that is weird, that coming from Navy Pier it's quite a walk to the Red Line," Burchard said.

The buses are coming

One big reason the Connector has failed to launch: money. The massive endeavor would be equally expensive, with just one leg, a "lakefront transitway" connecting the Near South Side and Streeterville expected to cost $150 million alone, according to the 2009 city plan.

Soon, city officials are expected to break ground on a new, less expensive bus rapid transit system aimed at easing Downtown congestion and better connecting its east and west ends. But buses are prone to traffic stops and pedestrians, and can be seen as more of an "interim solution," DeVries said.

"We need to start doing some things of real capacity moving people," he said. "What the Connector gives us is a chance to look further into the future. ... We need to put into place things that can be built over the next decade."

A spokesmen for Mayor Rahm Emanuel did not reply to a request for comment. A spokesman for the Chicago Department of Transportation said officials were still looking at details of the plan and could not immediately comment. Ald. Brendan Reilly (42nd), whose ward covers Downtown, could not be reached for reaction.

Gov. Bruce Rauner, in his first budget, cuts funding for mass transit by $130 million, including squeezing the CTA by $105 million, the Tribune reports.