WICKER PARK —   Signs went up over the weekend for Byline Bank, the new name for North Community Bank's 24 city outposts, it was announced Monday. 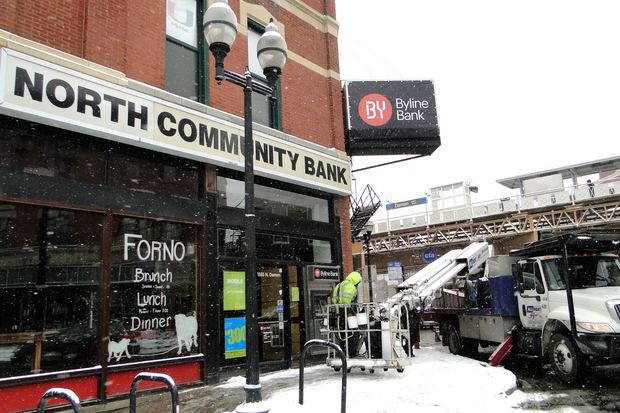 The privately owned local bank, part of the Metropolitan Bank group, was formerly owned by Peter and Paula Fasseas, who sold North Community Bank to an investor in 2013, according to Crain's.

During a light snowstorm Sunday morning, a worker was installing the new Byline Bank sign by placing a cover over the bank's existing sign.  The worker said he was among four crews of installers who were working all weekend to get the banks fitted with new signs. 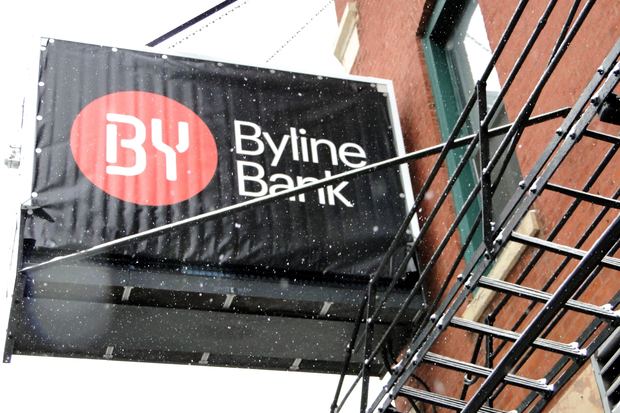 Due to the Presidents Day holiday, officials from the bank could not be reached Monday.  An announcement on the North Community Bank's website elaborated on the name change.

"‘Byline’ means authorship. For us, it means putting our name behind everything we do and working hard to help you, our customers, write your own story," said Alberto Paracchini, president and CEO of North Community Bank, in a letter to customers.

In the letter, Paracchini promises customers "more resources and better products, along with the same great people you know and trust continuing to provide the highest level of service."

The name change will coincide with "making improvements to the online banking website to bring you a better experience," according to the bank's website, which will be unavailable for online services from 6 to 10 p.m. Monday.

Bank account numbers will not change, and customers can continue to use their current checks, debit card and online banking accounts.