At The Original Heaven On Seven, It's No Longer Just Lunch (And Breakfast)

THE LOOP — The original Heaven on Seven is trying something new for its 35th anniversary this year: dinner, three nights a week.

Anyone who knows the venerable Cajun restaurant knows it is mainly a breakfast and lunch place, cash only, tucked away on the seventh floor of the Garland Building, 111 N. Wabash, and always packed.

It is open for dinner exactly once a month — the third Friday of the month at 5:30 p.m. — and has been that way for decades.

"We only started doing [dinner] 20 years ago," chef and owner Jimmy Bannos said.

But starting Feb. 12, the restaurant's famous gumbo, po' boys and corn muffins can be had until 9 p.m. every Thursday and 10 p.m. Fridays and Saturdays.

Bannos said one reason for extending dinner service was to catch business from the Rush Street location, which closed on Jan. 5 after 17 years. He said he also wanted to appease the Wabash regulars, who kept asking for more.

At one point years ago, dinner was served twice a month at the Wabash location, but it went back to one night after the Rush Street spot opened.

Cooking classes, held on the first Friday of each month, will continue. Bannos said he plans to partition off the dining room to create a private space for the classes.

During the year, he plans to bring in guest chefs and offer beer dinners and "Hot As A Mutha" dinners built around searingly hot peppers.

The restaurant's new general manager isn't that new. Andrew Bannos, Bannos' 28-year-old nephew, is a Johnson & Wales University graduate who has worked at Terzo Piano, Spiaggia and, most recently, Heaven on Seven in Naperville.

Bannos Sr. is calling this Heaven on Seven's "rebirth year." It is already marked by controversy involving his other popular restaurant, The Purple Pig, 500 N. Michigan Ave., where his son, Jimmy Bannos Jr., is the executive chef.

In November, Crain's Chicago Business reported on a lawsuit filed by Purple Pig partner Scott Harris against the Bannoses and the other partners, who include Spiaggia's Tony Mantuano. Among Harris' allegations: They embezzled funds and transferred a portion of his ownership in the award-winning restaurant to Bannos Jr. without his consent.

The Bannoses countersued in December, alleging Harris of stealing money from Bannos Sr. and the company account, forging Bannos Sr.'s signature on loan documents and paying off Purple Pig employees to leave the restaurant and work for him, according to Crain's. 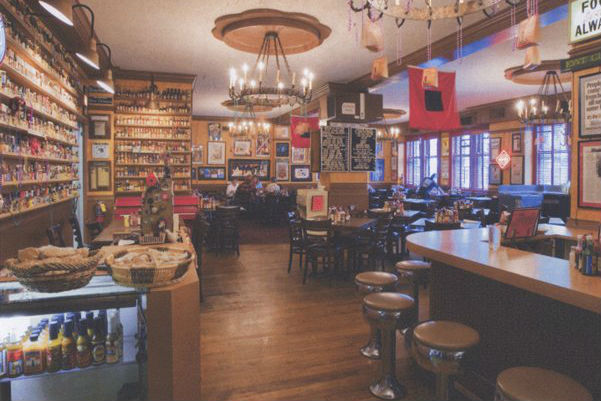 Uptown Losing Its Diversity As Minorities Leave In Droves