Best Doughnuts in Chicago: Check Out the Winners and Photos from Donut Fest

WICKER PARK — Doubled in size from its inaugural outing in 2014, Donut Fest returned to Chop Shop's 1st Ward on Sunday, and if the sold-out event is any indication, Chicagoans' love affair with fried dough shows no sign of abating.

The 900 attendees, split into morning and afternoon sessions, queued up for samples of fritters and paczkis, bombolini and twists from nearly a dozen bakeries angling for the title of Best Donut.

With last year's champ, Endgrain, MIA, the contest was wide open — sort of.

"No way," Sweet Cakes' owner Emily Smith said of her chances of nabbing the top prize.

"The people who are winning make doughnuts exclusively. We don't," she said.

She was right. The Judges' Choice award went to Firecakes and its Tahitian vanilla glazed doughnut.

"To be selected over all these good competitors is really humbling," said Firecakes staffer Joe Seiber.

Jonathan Fox, Firecakes owner, said the simplicity of his winning pastry was deceptive.

"I procure the best ingredients," he said. "I buy Tahitian vanilla bean and Saigon cinnamon. The flavor is incredibly distinct."

For the second year in a row, West Town Bakery earned the people's hearts, taking home the Fan Favorite trophy for its "doughssant," a croissant-doughnut mashup.

To boost its chances of victory, the highly competitive West Town team brought a warmer, serving its doughssant hot.

"You want to stick out as much as possible," said West Town's Dave Andrews. "Nobody likes to lose."

For those who would compare the current doughnut craze to the cupcake bubble, Seiber notes one crucial difference: "You can't make these at home." 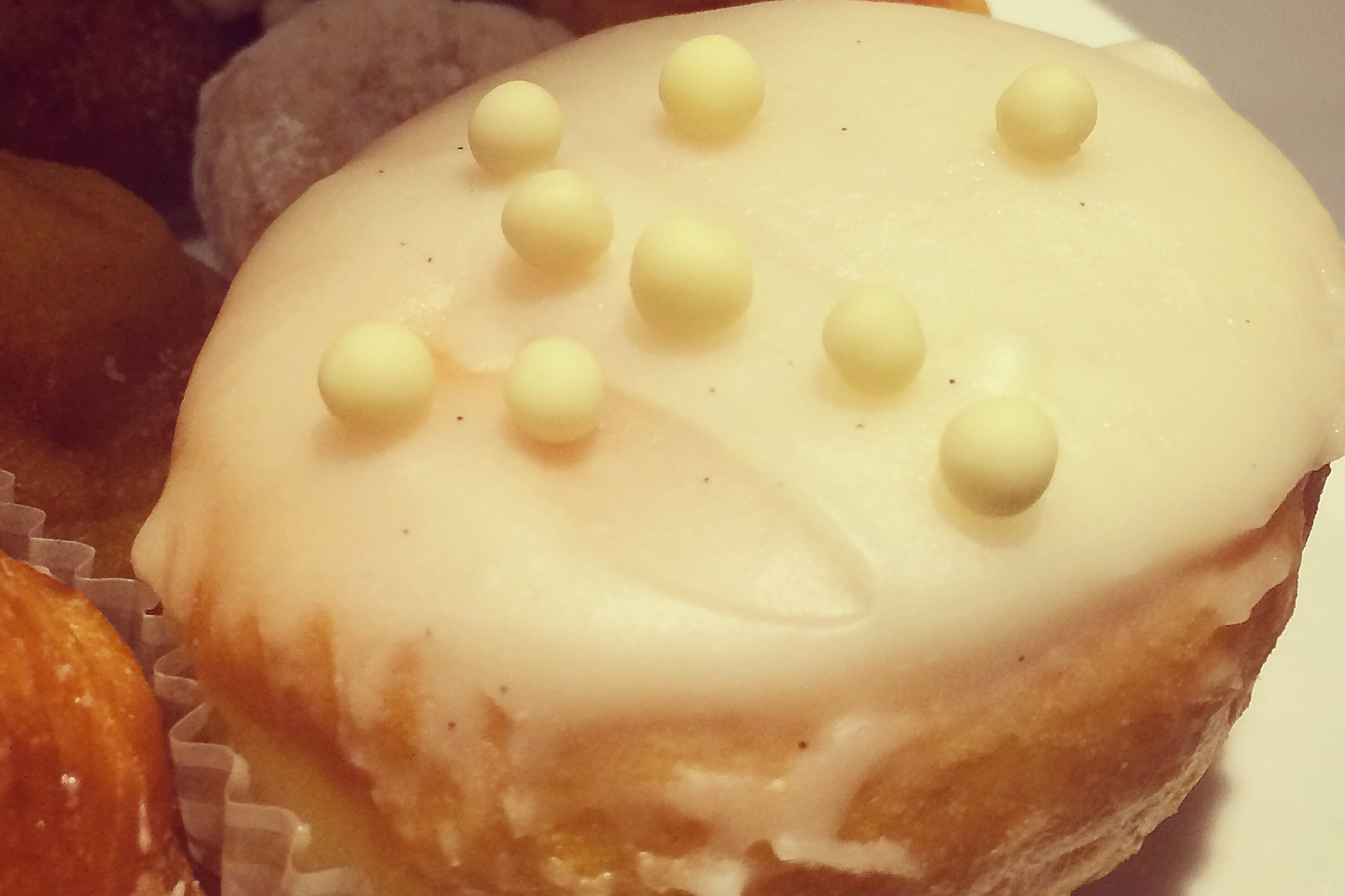 "What we try to achieve is to find a balance between the lightest doughnut you can create and richness," said Fox.

Mission accomplished. Firecakes' winning glazed doughnut proved so popular, the bakery ran out of samples midway during the fest's afternoon session, offering up its fritter and old-fashioned as a consolation prize. Firecakes, 68 W. Hubbard St. 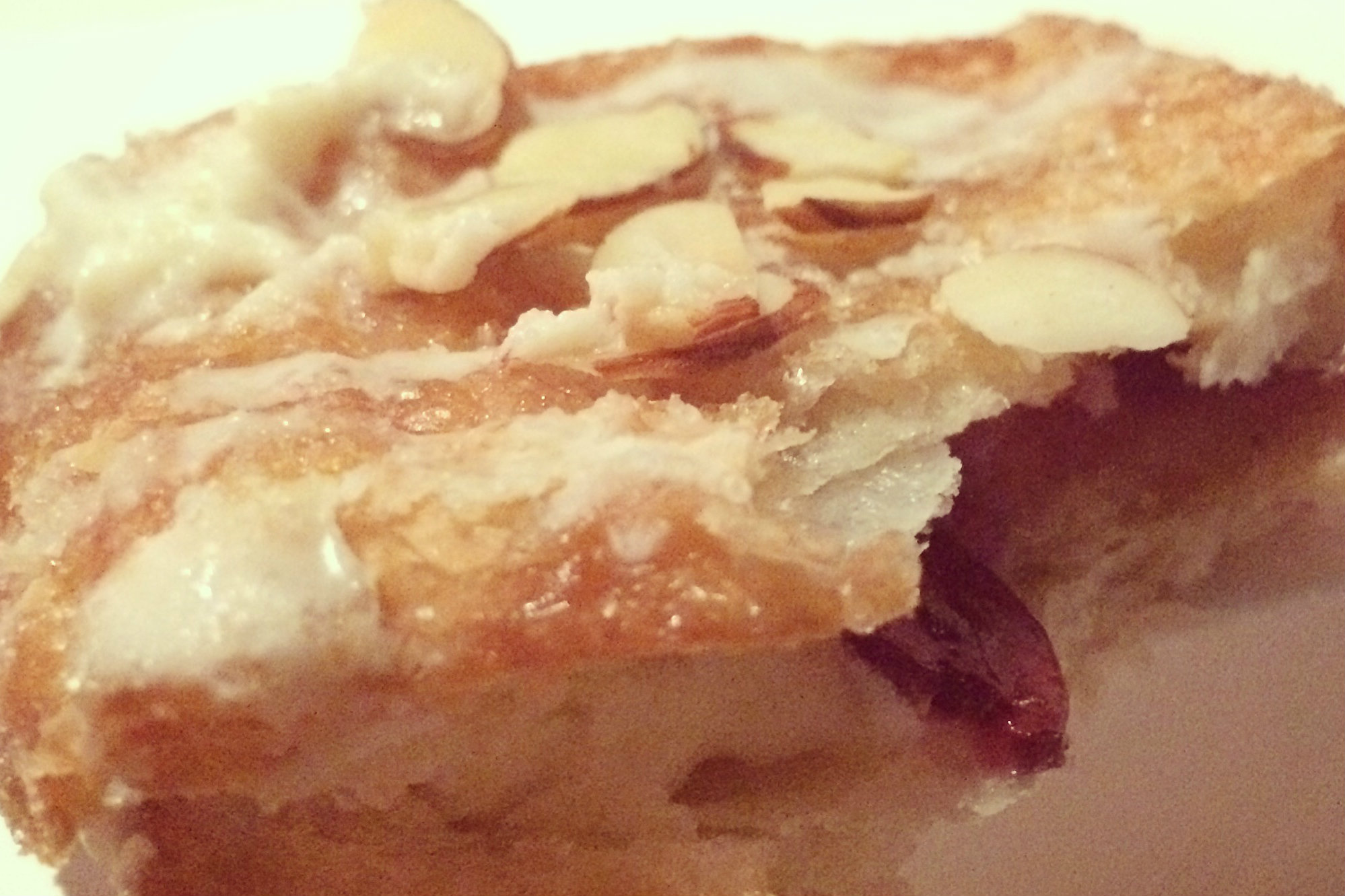 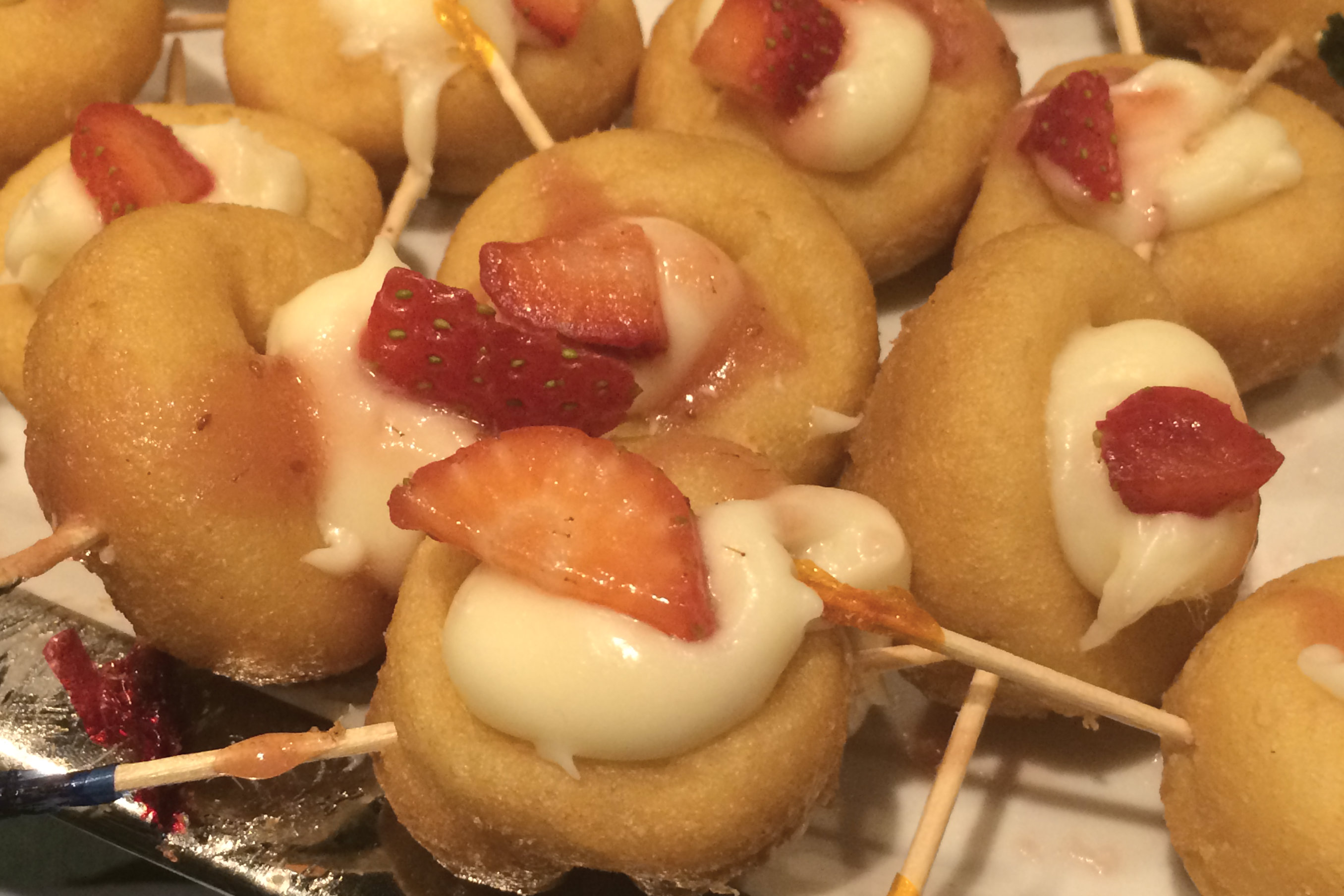 Look for Beavers' strawberry cheesecake doughnut coming soon to a dog park near you.

"It's not on our regular menu, but it's going to be our doughnut of the month for February," said Rebecca Christensen.

The Beavers' food truck has been rolling through Chicago's streets for five years now and also has planted roots at the French Market. Beavers Coffee & Donuts, 131 N. Clinton St. 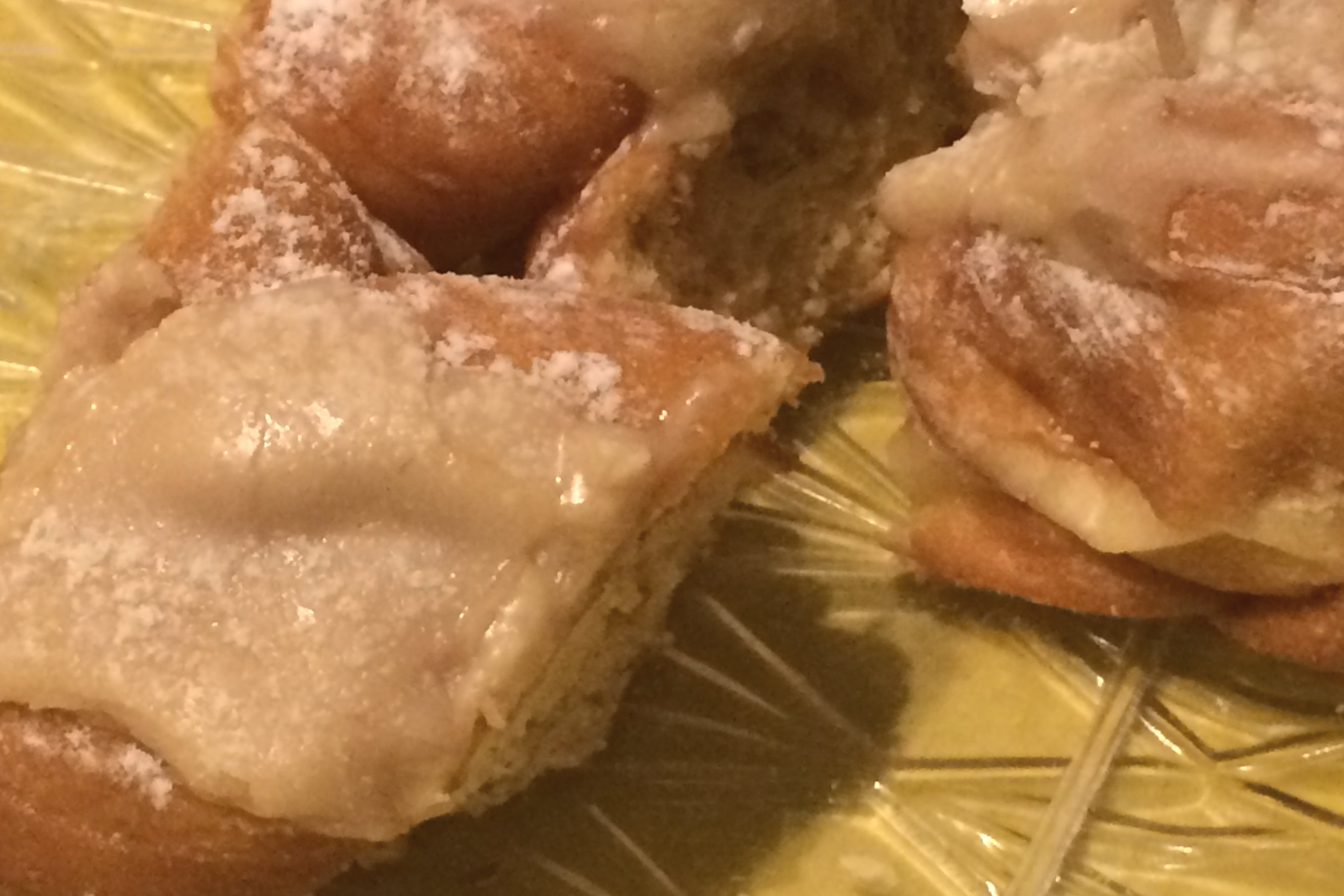 Donut Den's French toast twist has cinnamon and nutmeg braided into the dough and is topped with maple frosting and a dusting of powdered sugar. "It's definitely one people order two dozen of," said employee Crissy Nelson. You're gonna need that many to fuel your drive home from Joliet, which is where you'll have to travel to find Donut Den's shop. Donut Den, 3021 Theodore St., Joliet. 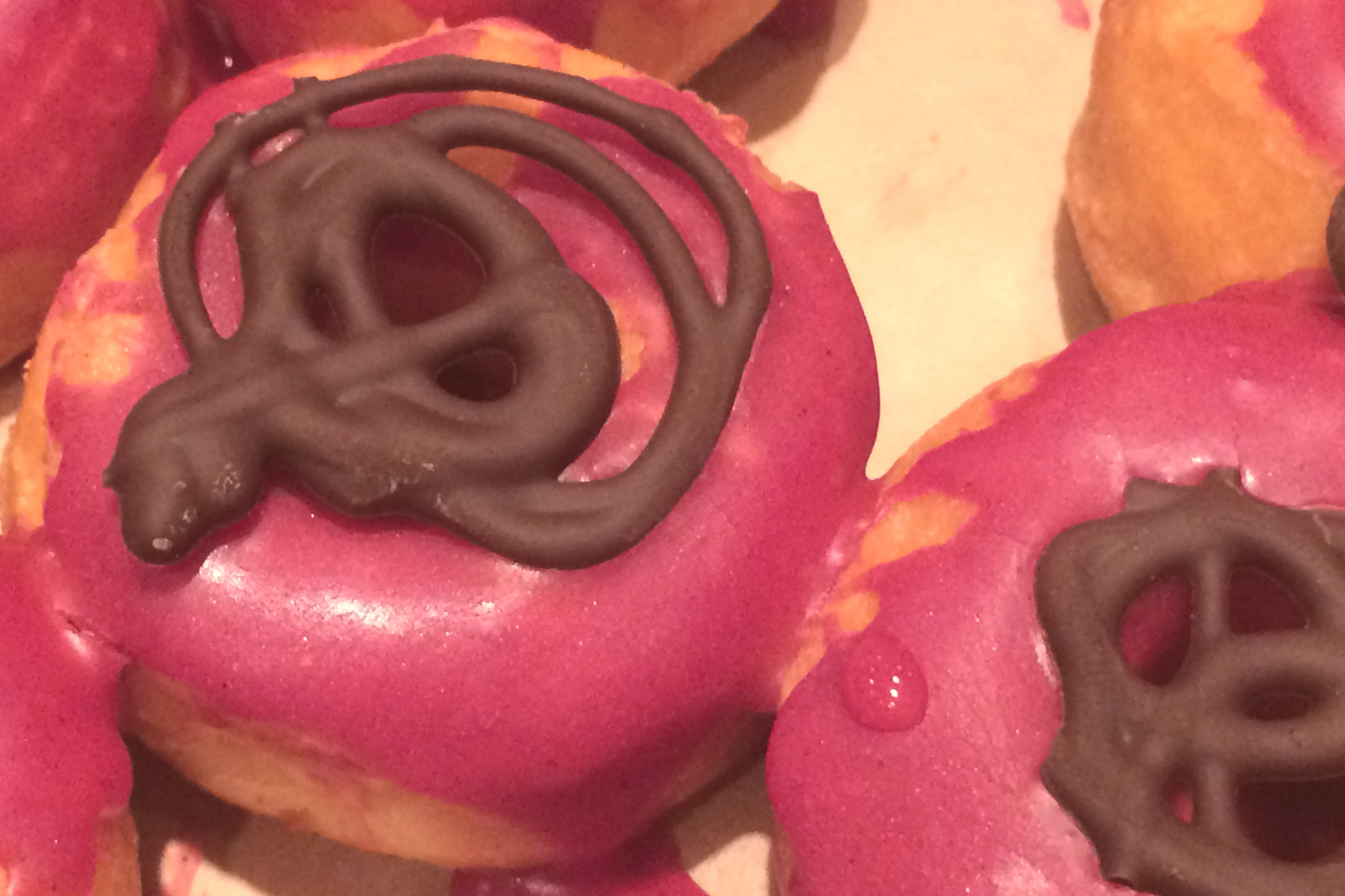 Glazed and Infused brought a preview of its Valentine's Day menu to Donut Fest. The maraschino cherry glazed doughnut debuts Monday, according Rachel Jones, who works at Glazed's Fulton Market location. The chocolate drizzle is meant to be eaten separately, she added. Glazed and Infused, various locations. 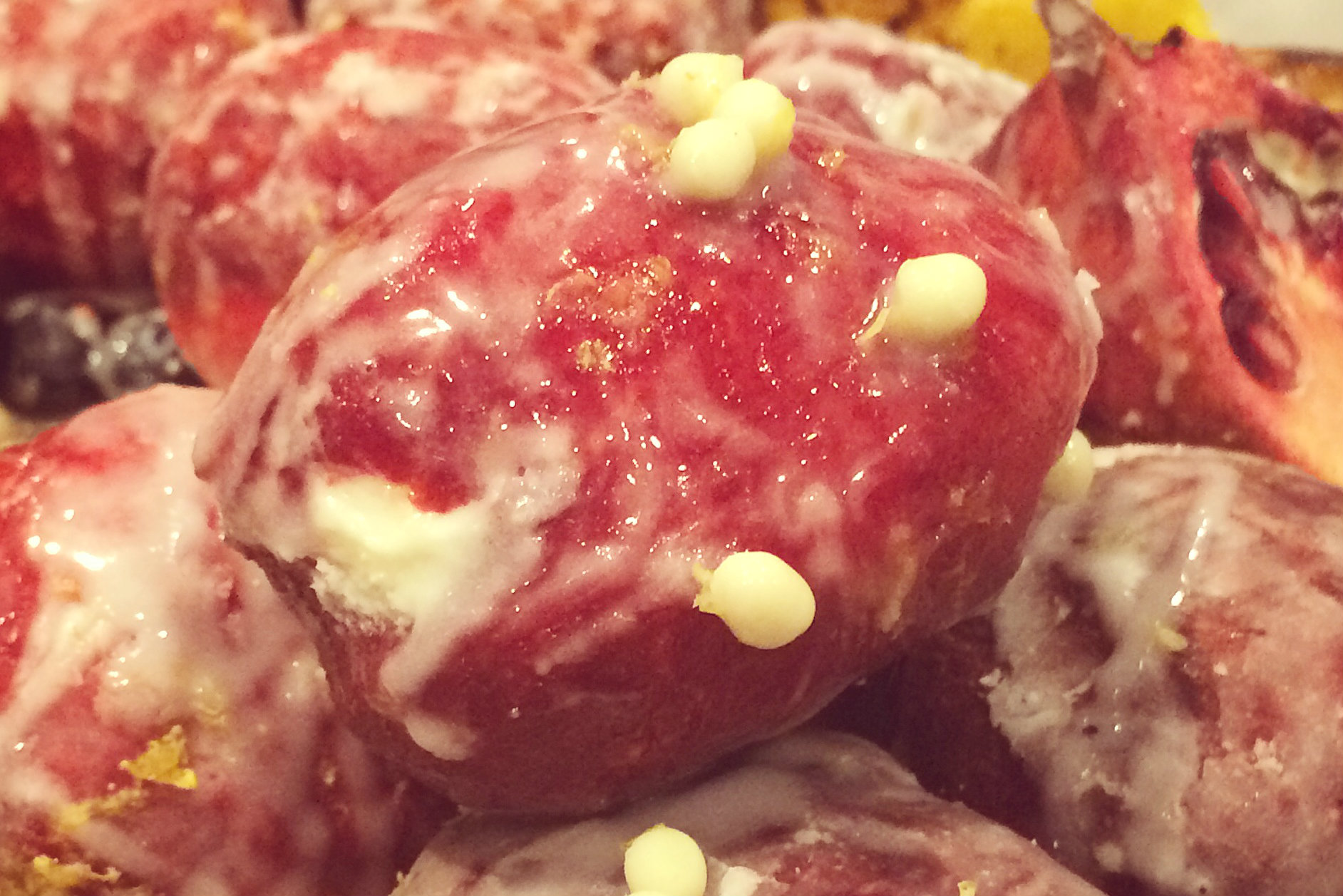 Goddess and Grocer wasn't just making its Donut Fest bow, it was debuting as a doughnut-maker, period. "We've never made them before," said owner Debbie Sharpe. Pastry chef Alysha Boze perfected her red velvet recipe — a variation on the shop's red velvet cupcake — after "lots of trials and some errors," she said. The doughnuts, which executive chef Jennifer Gavin pointed out are hand-rolled and hand-filled with lemon cream cheese, will be added to the shop's menu in March. Goddess and Grocer, various locations. 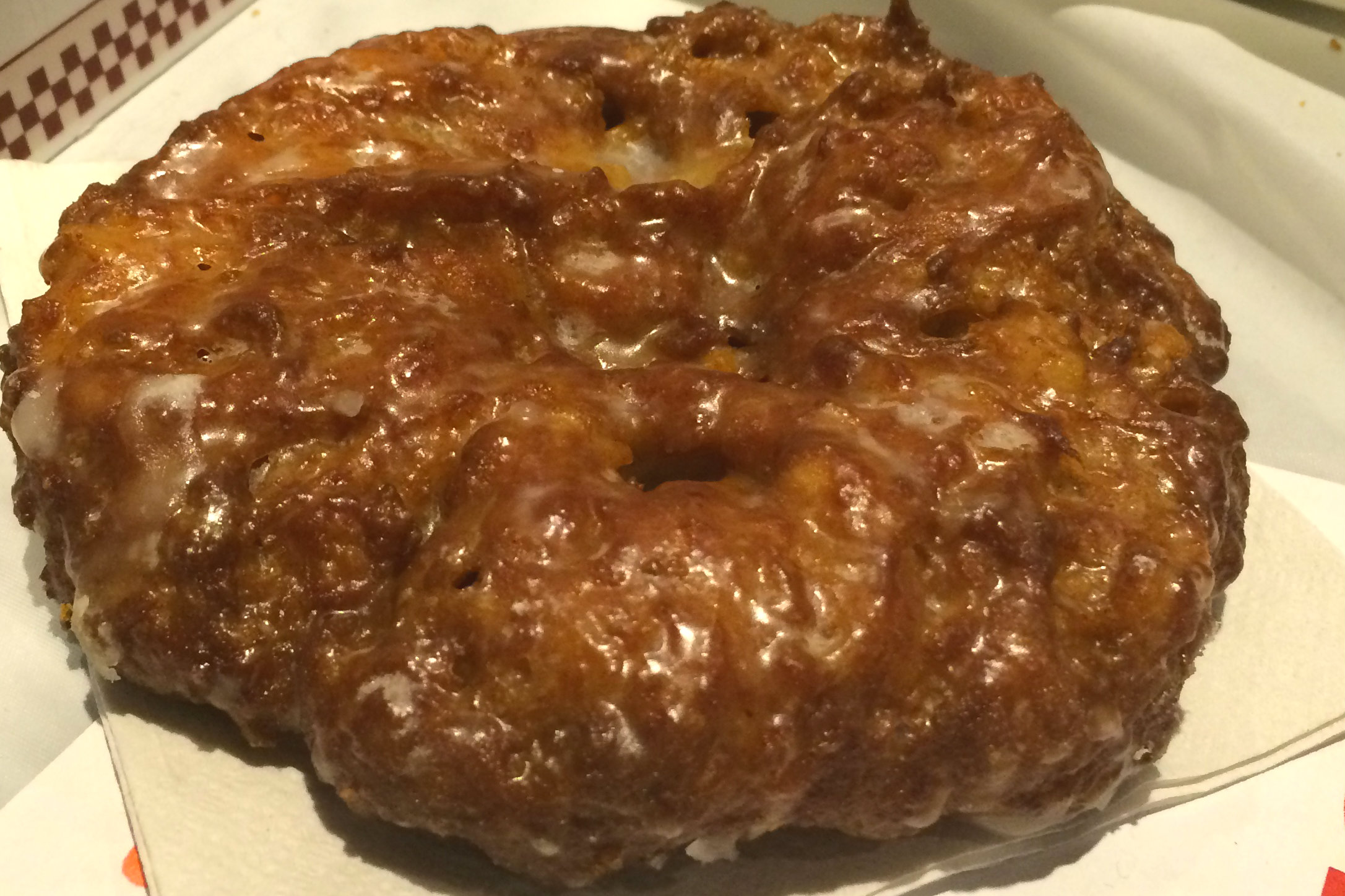 Lee Donuts apple fritter is legendary in Libertyville, where the family-run shop has been slinging doughnuts since 1988. "You gotta bring your best," said owner Bill Kaiser, competing at Donut Fest for the first time. What's the key to the fritter's flavor? "Twenty-two years experience," Kaiser said. "We've had the same baker for 22 years." Lee Donuts, 124 Peterson Road., Libertyville. 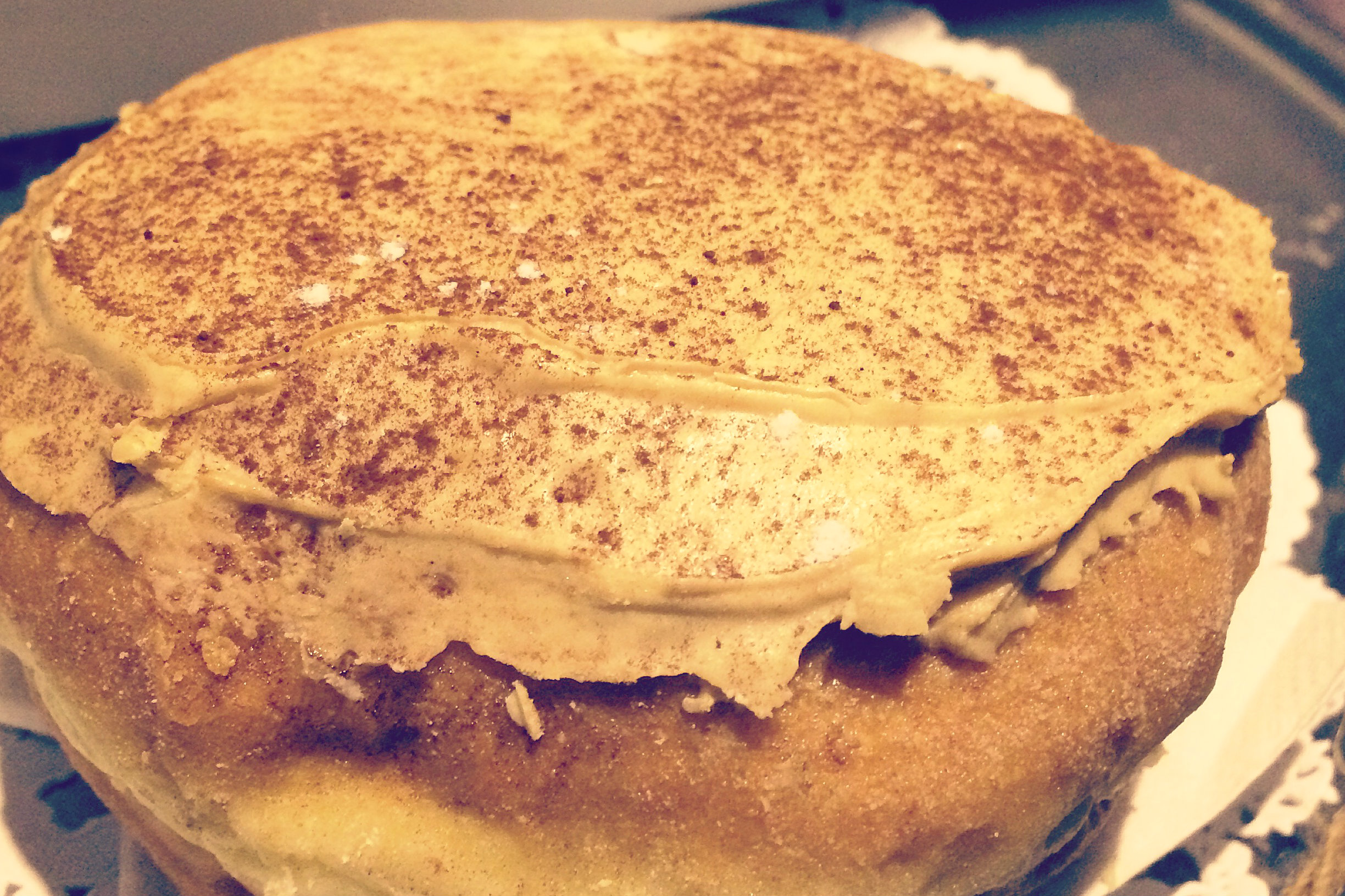 What exactly is a bombolini? According to the folks at Scafuri, a Taylor Street institution since 1904, the word means "little ball" in Italian. Scafuri makes a different flavor of the yeast doughnut every day, according to Malina Gres. The tiramisu version sampled at Donut Fest featured mascarpone, espresso and brandy cream and was topped with an espresso glaze and cocoa powder. Said Gres, "We wanted to do something true to our roots as Italians." Scafuri Bakery, 1337 W. Taylor St. 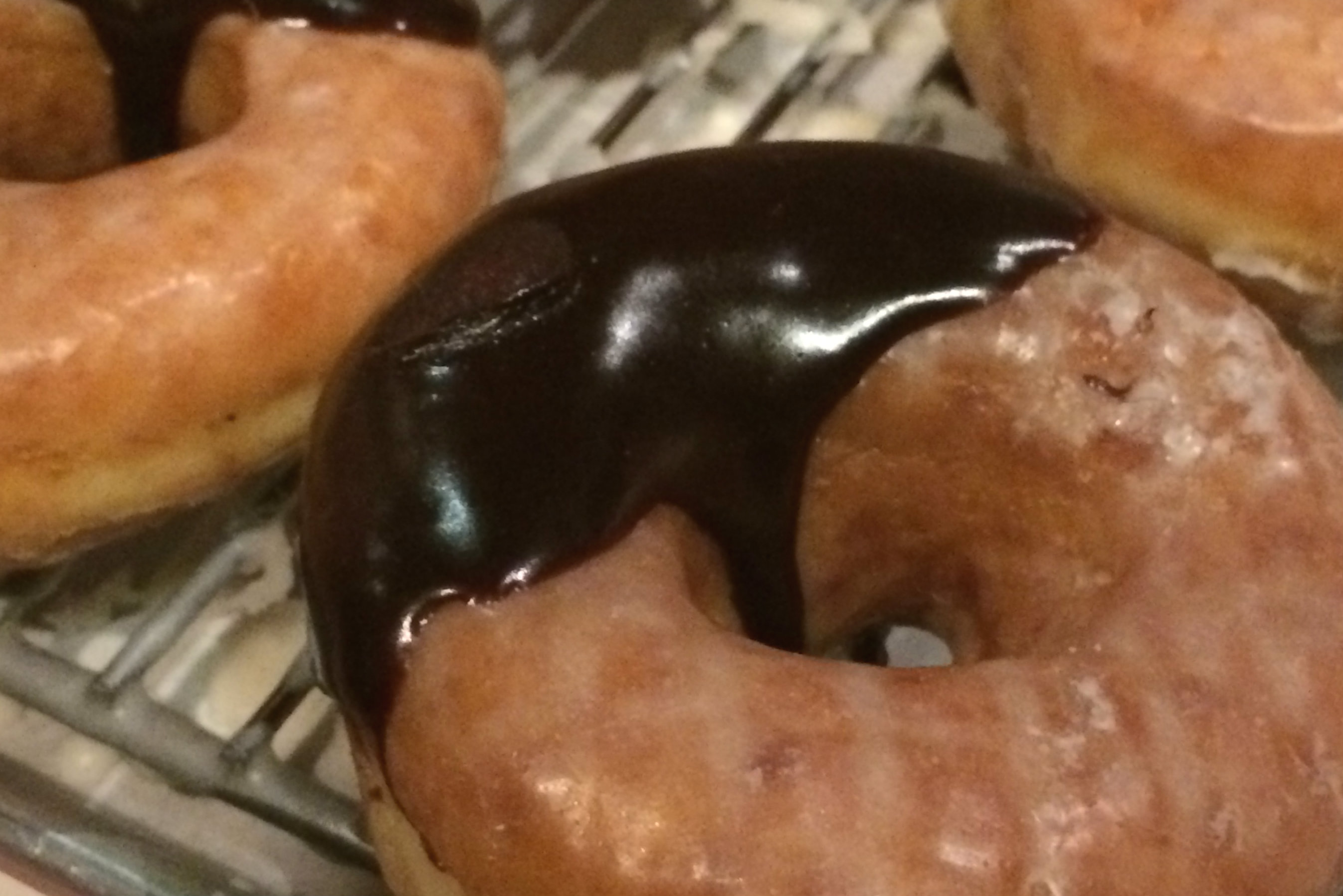 For doughnut lovers who can never quite make up their mind between chocolate and vanilla glaze, Stan's had the perfect solution — its "moon-glazed" sample featured both. The rare classically shaped doughnut found at the festival, Stan's simple yeast version held its own against more elaborate competitors. Stan's Donuts, 1560 N. Damen Ave. 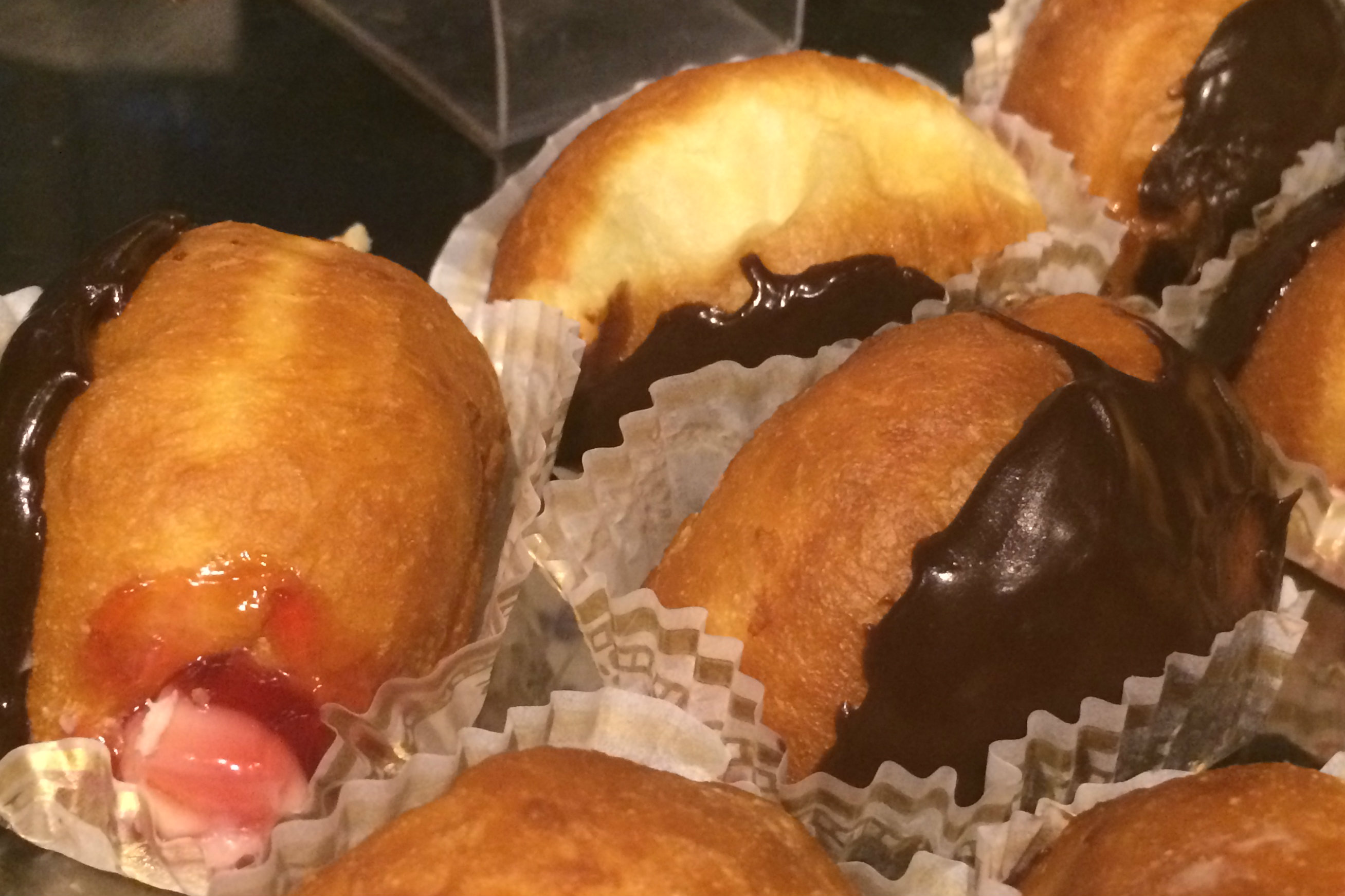 A Fat Tuesday tradition, paczkis are popular year-round at Andersonville's Swedish Bakery. What makes a paczki a paczki? "It's supposed to be overstuffed," said Dina Teolis. And the bakery's was, bursting with cherry cheesecake filling. Manager Eliza Williamson said she held a tasting with her staff, and this was their hands-down choice to compete at Donut Fest. Swedish Bakery, 5348 N. Clark St. 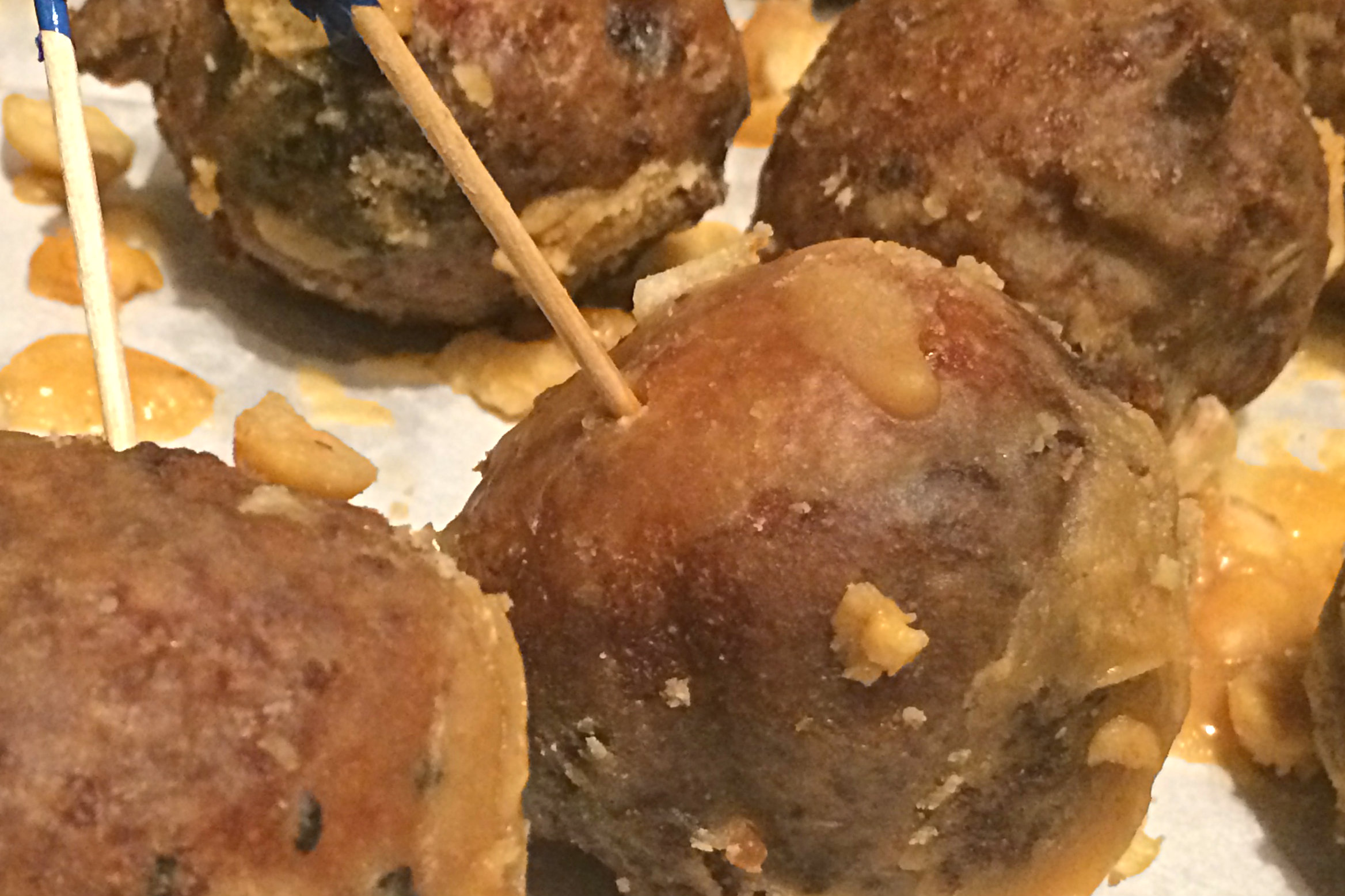 Sweet Cakes' banana and peanut butter doughnut "bite" combined the sweet and salty flavors the bakery's known for, according to owner Emily Smith. After churning out 900 of the little suckers for Donut Fest, Smith said she is momentarily "over" doughnuts and was happy to return to cakes and cookies. "It felt like so many hours," she said. Sweet Cakes Bakery, 1223 N. Milwaukee Ave.

No. 170 Bus Route Getting Cut After U. of C. Drops Funding