Hollywood in Your 'Hood: See Where Crews Filmed in Chicago in 2014 [MAP]

CHICAGO — Chicago is looking more and more like Hollywood.

The city's film business broke records in 2013 and a preliminary look at the productions that filmed across the city in 2014 seem to suggest last year was even better.

Here's a map showing where film companies shot scenes for 10 television shows and two major motion pictures in 2014. The information was provided by the city's Department of Cultural Affairs and Special Events. Read further to learn about all 12 projects:

Tanveer Ali breaks down the big film shoots of last year in Chicago:

Does Chicago make a better Gotham City or Metropolis? How about both?

For a few days in November, Uptown was transformed into the fictional home of Batman and parts of Downtown into Superman's adopted city of Metropolis for the upcoming movie "Batman v Superman: Dawn of Justice."

Notable transformations include turning Uptown's Aragon Ballroom into the movie theater near where Bruce Wayne's parents are killed:

A photo posted by Joshua Mellin (@joshmellin) on

The transformation of the Lawrence Red Line station into a Gotham Transit Authority stop:

A photo posted by John Leon-Guerrero (@jtlg) on

And Downtown's Illinois Center turning into The Daily Planet, the newspaper where Superman's alter ego works:

I spy some movie making in my neighborhood. #BatmanvSuperman

A photo posted by Lisa Byington (@lisabyington) on

The movie, which stars Ben Affleck as Batman, Henry Cavill as Superman and Amy Adams as Lois Lane, comes to theaters on March 25, 2016.

After coming to Chicago in 2013 to film the upcoming movie "Jupiter Ascending," Andy and Lana Wachowski came back in 2014 to film a new series called "Sense8," which Netflix calls a "globe-spanning thriller" set to come out sometime this year. 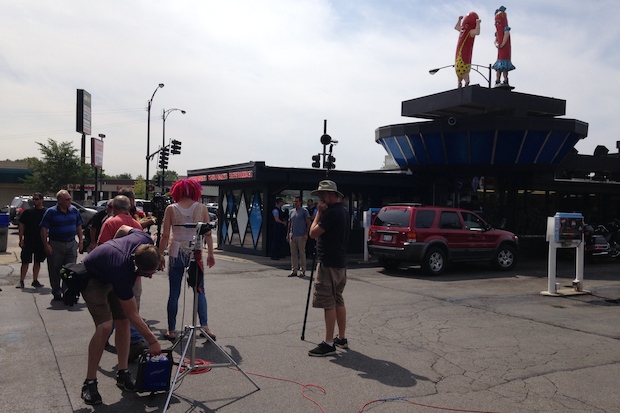 The show will is expected feature scenes shot near Wrigley Field and inside Superdawg in Norwood Park.

A car chase scene was also shot in Uptown.

The final season of the NBC show starring Amy Poehler premiered with two episodes Tuesday. The second episode featured a trip to Chicago by characters played by Aziz Ansari and Chris Pratt.

Orange is the New Black

The Netflix series about a women's prison filmed part of its second season premiere in Chicago on Feb. 13.

The series is based on a book by Piper Kerman that detailed the time she served in a federal women's correctional institution for her role in a heroin-trafficking case.

Chicago played a pivotal role in the book. The drugs moved through O'Hare Airport, the Tribune reported, and Kerman reportedly admitted to taking three trips for the trafficking ring, one of which involved taking $50,000 from Chicago to Brussels.

She also spent time in Chicago at the Metropolitan Correctional Center.

Cobie Smulders of "How I Met Your Mother" fame stars in the film by Chicago's own Kris Swanberg as a teacher who unexpectedly becomes pregnant.

Most of the filming locations for this film were in West and Northwest Side neighborhoods including Humboldt Park and Ukrainian Village.

One of the locations in the film, presumably the school where Smulders' character teaches, is Lindblom Math & Science Academy in Englewood.

The pilot for this new show featuring Terrence Howard as a hip hop mogul aired earlier this month on Fox. It's filmed in Chicago, but is set in New York City.

Scenes for the pilot were shot inside Double Door Liquors in Wicker Park.

None of "Shameless," a Showtime series starring Emmy Rossum and William H. Macy as members of the Gallagher clan in Canaryville, is actually filmed in Canaryville.

The "Canaryville" of the show is actually in North Lawndale, where the Gallaghers' home is located in the 2100 block of South Homan Avenue. The show has filmed several times on and around that block in 2014.

The fifth season of the show started on Showtime on Sunday.

The permits really do cover the entire city.

Filmshoots for NBC's "Chicago Fire," now in its third season, have become commonplace. Crews have shot scenes in neighborhoods throughout town, including North Park, Logan Square and University Village, where the show's featured fire station is located.

Like its sister show "Chicago Fire," the city stars in "Chicago P.D.," an NBC show that debuted in January 2014.

Now used by the University of Illinois at Chicago's police department, the police station at 943 W. Maxwell St. doubles as the main one used in the show.

Permits are unnecessary for filming near "The Silos," an important location on the show that is on Damen Avenue near the Stevenson Expy. That property is owned by the state.

A comedy about paramedics in Chicago, "Sirens" debuted last year and was renewed by USA for a second season.

There are fewer Chicago locations featured in this show compared with "Chicago Fire" and "Chicago P.D.," but filming for this show made its way through various Chicago neighborhoods in 2014.

Crews filmed across from Barack Obama's house multiple times in September and October. 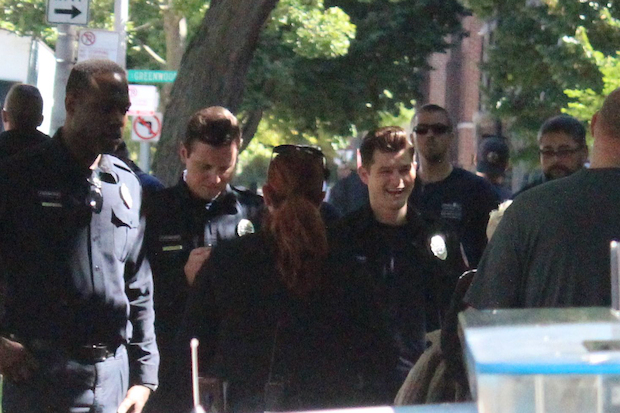