Here's the Kennedy Graffiti That Ruined Your Morning Commute

By Mauricio Peña |&nbspDecember 5, 2014 8:20am | Updated on December 5, 2014 11:08am
@mauriciopena
Twitter Facebook Email More
The graffiti that slowed a city down.
View Full Caption
IDOT

CHICAGO — Drivers on the Kennedy Expy. Friday morning endured a brutal commute after state transportation crews tried to remove graffiti on a sign over the expressway at Division Street during the morning rush.

Someone painted on the huge overhead sign showing drivers the path to the Dan Ryan Expy. and Indiana near the Byrne (Circle) Interchange, sending IDOT crews out, closing lanes — and raising lots of ire over the timing of the cleanup.

The backups from the closures stretched for miles, and stretched commute times from O'Hare to Downtown to more than two hours. 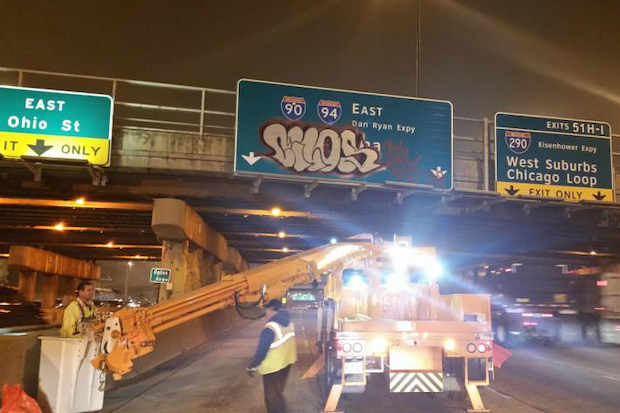 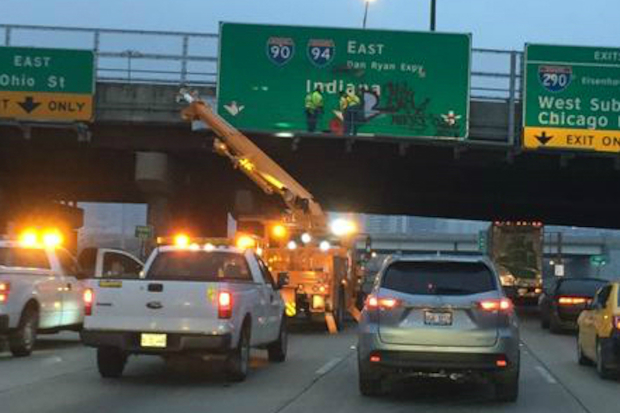 The Illinois Department of Transportation released the following answers about the morning problems:

What did the graffiti say?
"The graffiti was black spray paint that stretched over three lanes of traffic. What was written was indecipherable. The site was more than likely accessed through area reserved for maintenance responsibilities."

What time did crews arrive and plan to finish? How long is the entire process expected to take?
"We had a crew arrive about 6 a.m. and leave about 7:30 a.m. We did need to block two lanes of traffic and, for brief periods, three. We still have some minor cleanup work to do and will likely have to revisit this location again at a more convenient time."

Why was the removal done during rush hour commute?
"We were alerted right before the start of the morning rush of extensive graffiti painted on one of the overhead signs on the Ogden Avenue overpass on the inbound Kennedy Expressway. The graffiti was obscuring an important sign in an area that people do rely on to get to where they need to go approaching the downtown area. We understand this did cause an inconvenience, and we do apologize for that. This was a situation we did not create. For safety reasons, we elected to address it as quickly as possible.

"We cannot emphasize enough how dangerous and, as this morning showed, disruptive, this kind of vandalism is. If anyone sees this kind of activity taking place, they are urged to call law enforcement immediately."