After 26 Clean-Shaven Years, Is Chicago Ready for a Mustachioed Mayor?

For 26 years, clean-shaven mayors have ruled Chicago, and Garcia — currently the only mayoral candidate with a furry upper lip — told me it’s time for a change.

“So you want to talk mustache?” the Cook County commissioner said, acknowledging “We’ve had a long dry spell."

Now, he said, "It’s high time the people of Chicago are represented by a mayor with a mustache."

And "a full one" at that — "not one of those mustaches that need to be shaved every day, either," he said.

It's time for a mayor with "a low-maintenance mustache that only needs to be trimmed two or three times a week.”

Garcia’s push-broom mustache dates back to his sophomore year at St. Rita High School, when at age 14, the first bit of peach fuzz sprouted on his upper lip. And he’s remained committed to the 'stache ever since — proof he can never be accused of jumping on the “Movember” bandwagon.

“I’ve never shaved it,” Garcia said. “There have been close calls when I’ve been in a rush or not looking in the mirror when doing a shave, but those were only a few nicks and bumps that grew back after a few days.” 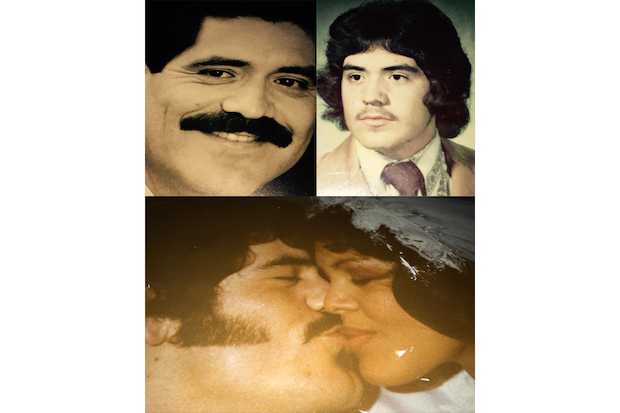 At University of Illinois at Chicago, Garcia’s mustache became “more manly,” he said, which inspired an experimental phase in his life — that added pork chop sideburns and a soul patch — that's one of those fuzzy triangles under the bottom lip — to his face. It's a look he even sported on his wedding day.

“When I first became a candidate for public office in 1983 the little triangle and the sideburns were sacrificed to make me look more mainstream,” Garcia said. “But not the mustache. It will never suffer such a fate.”

The coming mayoral election will be about a lot of important issues — public schools, pensions and property taxes to name a few — but if there’s at least one thing that Garcia has going for him it’s that the city’s mayoral facial hair history is on his side.

Since 1837, Chicagoans have overwhelmingly preferred a mayor with facial hair.

Our city’s first mayor, William B. Ogden, sported a full beard and was succeeded by a Mayor Buckner Stith Morris, who sported an aggressive “chinstrap,” which also was the facial hairstyle preferred by Chicago’s 20th mayor, John Charles Haines.

And since then, 30 of the 44 people who served as mayor sported facial hair — some styles that would impress even a hipster with a handlebar mustache.

In fact, three Chicago mayors have sported a facial hairstyle called the “Shenandoah,” a mustache-less beard like the one favored by President Abraham Lincoln.

Our 22nd mayor, Julian Sidney Rumsey, was the only Chicago boss daring enough to pull off the impressive “Friendly Mutton Chop,” a style that connects one giant sideburn to another giant sideburn via the mustache while leaving the chin exposed.

Only one Chicago mayor, Monroe Heath, wore a goatee — and it was a big one, even for the 1870s.

Six mayors had sideburns halfway down their faces, and our 12th mayor, James Hutchinson Woodworth, covered his cheeks with muttonchops.

Only 14 mayors have been clean-shaven — including, of course, our first and only female city chief,  Jane Byrne. But for 56 years starting in 1927, Chicagoans only elected mayors with smooth faces, including the city’s most powerful boss, Mayor Richard J. Daley. 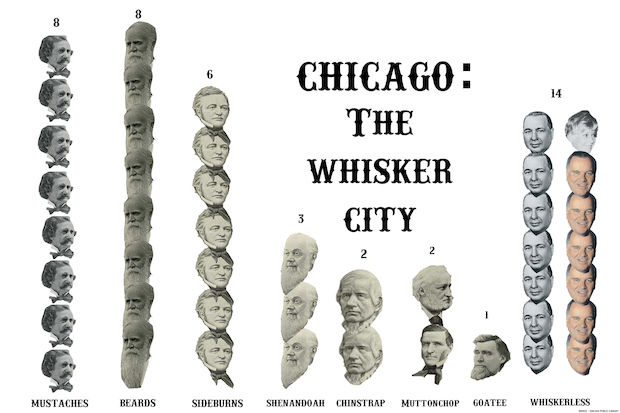 Chicagoans haven’t elected a mayor with facial hair since 1983 when Harold Washington made history … as our city’s fifth-ever mustachioed mayor.

Both of Washington’s immediate successors — Cook County Clerk David Orr and the late Eugene Sawyer — had mustaches before the most recent facial-hair drought started with clean-shaven former mayor Richard M. Daley in 1989.

And Garcia says he’s got exactly the right mustache to return face fur back to City Hall’s fifth floor.

“If you look closely, my mustache has a rainbow of colors that represent our city’s great diversity,” Garcia said. “Even Harold Washington didn’t have the mustache credentials I do. His was mostly black and white. He couldn’t boast having strands of brown, red and white and black in his mustache.”

As he continued, I started to wonder if we'd start to see “Vote Mustache For Mayor” election signs in the shape of Garcia’s “Tom Selleck” popping up in Logan Square and hipster 'hoods all over Chicago.

Garcia — possibly in an attempt to court votes from the city’s urban farmers, do-it-yourselfers and Mariano’s shoppers — told me his “mustache is 100 percent organic.”

"And I don’t use any electrical devices to trim my mustache. I only use scissors. It takes a steady hand. I learned that early on, especially after I did some heavy partying when I was younger. And same goes for when you have too much coffee.”

Garcia even offered up the makings of a pretty nifty pro-'stache campaign slogan:

“I’m here with a mustache that's ready to help the city move forward.”