David Bowie Dead at 69: Check Out His Chicago Connections

Through the years, Chicago played a prominent role in Bowie's career, even though he didn't spend much time here.

"David did some of his most interesting things here," said Geoffrey Marsh of Victoria and Albert Museum, one of the lead curators of the traveling "David Bowie Is" exhibit, which had a run at the Museum of Contemopary Art starting in fall 2014.

From his first show in Chicago in 1972 to Mayor Rahm Emanuel declaring "David Bowie Day" in September 2014, to mark the U.S. launch of the exhibition, we charted the glam rocker's ties with Chicago, which included his relationship with Woodlawn native Ava Cherry.

"He loved Chicago. The audience here was very kind to him," said Cherry, Bowie's girlfriend back in the 1970s.

When Bowie was in town, he'd stay at the Ritz-Carlton in Water Tower Place on the Magnificent Mile, Cherry said.

FROM SEPTEMBER 2014: Lizzie Schiffman said anticipation had been running high since ticket sales were announced earlier in the year:

Bowie never visited Cherry's home near 55th Street and Woodlawn Avenue, where she still lives today, but she said that he did love the city as a whole.

"He thought Chicago was beautiful," Cherry said. "He loved the lake. He loved the architecture." 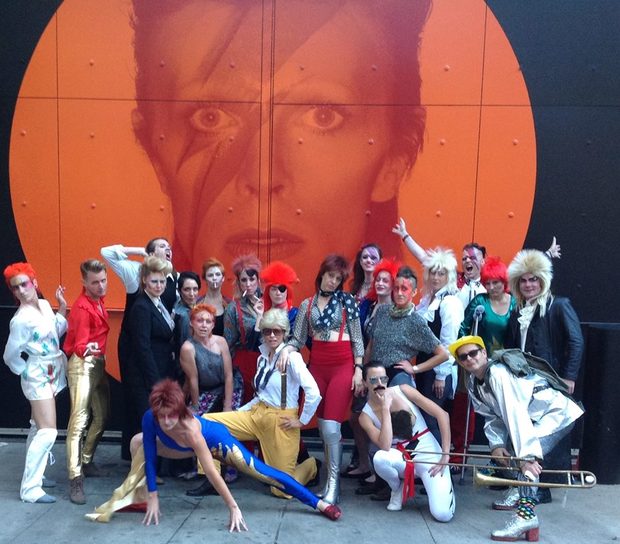 A group of Bowie-loving Chicagoans pose in front of the Museum of Contemporary Art during the Bowie exhibit in Fall of 2015. Facebook/MCA