BROAD CHANNEL — Standing in the front of the packed Veterans of Foreign Wars Hall on Shad Creek Road, Lou Mendes, who joined Build It Back months before, faced a group of residents for the first time.

Many had moved out of their homes only to wait months for work to begin. They'd been through the Build It Back bureaucracy — with construction managers who wouldn't return their calls and delays — since they first signed up for the program in 2013.

Mendes answered their questions, giving out his personal cellphone number and inviting anyone to call him with questions.

"It's not going to continue to be a s--t show," he promised. 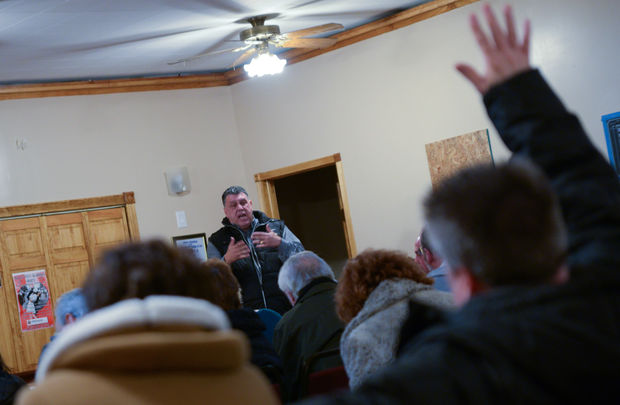 To him, that truth means working to find more contractors so they can elevate more houses and finish more jobs. He's bringing a trailer to the neighborhood so inspectors and architects all work out of one place. And he's speeding up construction starts after people move out of their homes.

"I am not playing this six month game," Mendes said, referring to the historically long delay between when people are told to move out of their home for construction and when construction actually begins.

The audience of residents — many of whom have been fed up by empty promises about construction in the years since Hurricane Sandy flooded their homes on Oct. 29, 2012 — seemed to appreciate the straight talk.

One resident spoke up — not to offer a question or a complaint, but to shake Mendes' hand. He walked to the front, and the handshake turned into a hug.

But he said Mendes strikes a chord with locals.

"I think Lou has resonated with people," said Mundy Jr., who has sparred with the city over past delays.

Staten Island Borough President James Oddo said within 30 seconds of meeting Mendes, "I wanted to get out of my chair and hug him, and ask him where he's been the last four years," he said.

Mendes "took a flamethrower to the place," he said, quoting Al Pacino.

"I'm less concerned with a bureaucrat's bruised ego or dented feelings, and more about people getting home faster," Oddo said.

"When a guy likes this comes along, it's like in professional wrestling when you're getting beat up in the ring and the music changes and the good guy's in the corner," Oddo said. "We may give him his own entrance music next time he's in Borough Hall."

Mendes said he's confident that years of dealing with the toughest jobs can help him take Build It Back across the finish line.

"My whole career, I was involved in ‘get it done yesterday’ projects," Mendes said recently on West 13th Road in Broad Channel, where nearly nine houses have been elevated in 10 days.

His first government job was with the New York State Facilities Development Corporation in the 1980s, which was tasked with managing state-run buildings after investigative reports exposed rampant abuses and deplorable conditions at the Willowbrook State School for mentally-disabled children and adults on Staten Island.

He joined the Department of Design and Construction in the early 1990s, working on bio-terror labs, the NYPD's forensic lab, building and crane collapses.

Before returning to the DDC to oversee logistics and coordinating the multi-agency requirements needed for each individual home involved in Build It Back, he was the executive vice president of design, construction and facilities at the 9/11 Memorial Museum.

He got that job after overseeing demolition and cleanup at Ground Zero following the Sept. 11 attacks.

"That was not easy," he said of his time overseeing cleanup efforts at the pile of rubble left when the towers collapsed after the terror attacks, trapping firefighters and office workers beneath.

He knew Amy Peterson, the director of Build It Back, from when they worked together at the DDC. He said she asked him several times to join Build it Back, which was on track to blow Mayor Bill de Blasio's Oct. 29, 2016 deadline for completion while also racking up millions of dollars in cost overruns.

"Amy tried to convince me a couple of times," Mendes said, with a smile. "And then she succeeded."

He shrugged off reports that he bullied DDC staffers once he began work, saying the city had been incredibly supportive and involved. He said everyone appreciates what he's trying to do.

"I am so grateful he is working with us on Build It Back helping more and more homeowners return to safe and resilient homes every day," she said in an email​.

Mendes said his biggest challenge has been getting more contractors to work on jobs, and managing the complex program.

Bills passed in the fall by the City Council have helped streamline inspections, but there are still challenges.

In Broad Channel, where streets flood during high tide, construction is at the mercy of the moon cycle. (Mundy, Jr. gives the tide calendar to new contractors working on repairs and elevation.)

Homes have outdated permits — many filed by architects who are no longer alive — or major structural issues like termites only discovered once a house is elevated.

To Mendes, it's just another problem to fix.

"At the end of the day it’s about the people," he said. "We got to get people home."

At the Broad Channel Civic Meeting, he promised to complete projects by October — and guaranteed to get Jenn Keegan, 37, back into her home on Demerest Road in Broad Channel by the time she's slated to get married in June.

Keegan said she moved out of her home in April, only to watch it stay untouched for months.

But she said as soon as Mendes joined the program, work on her home began.

"I went out of my way at the end of the [Broad Channel Civic] meeting to go shake his hand," Keegan said. "I left feeling a lot better after hearing him speak."

"And if he gets me in my house, he's invited to the wedding."