QUEENS VILLAGE — Five people between the ages of 2 and 20 — four of whom were members of the same family — died in a fast-moving fire that tore through a three-story home Sunday, officials said.

The four-alarm blaze spread to two neighboring homes, damaging part of them.

Firefighters responded within minutes but couldn't save the five people inside.

Matthews and Dones were both pronounced dead at the scene, and the rest died at Jamaica Hospital, officials said.

All the victims, except for Edwards, were members of the same family, friends and officials said.

Neighbors described Matthews and his family as devoted churchgoers.

"The young kids sung in the choir. The grandfather played the drums. They were church kids who came from a Christian family," said neighbor Charles Perkins, 76.

Foxworth was passionate about cheerleading at Young Women's Leadership School, according to a classmate who visited the scene and broke down in tears as she remembered her friend.

"She was a good person. I've only known her a year, but we were so close. Our friendship was everything to me. Our school is devastated — the whole cheer team," said Natasha Khan, 14.

The Sunday fire is the largest loss of life in a fire since seven children were killed in a house fire in Midwood in 2015, authorities said.

As flames leaped from the building, one man climbed out of a window and jumped from a second-floor roof to escape the fire, officials and a witness said.

"He kept pacing back and forth. He was yelling, 'The kids! The kids!' We were telling him, 'You have to jump!' The flames were a couple feet away, almost on his back," said neighbor Benjamin Gordon, 45.

"All I saw was him on the roof, and then the next thing, he jumped," said Zedias Mudzimba, 56, who drove by the fire and called 911 after seeing flames shooting from the first and second floors of the wood-frame home.

Gordon also spotted another man emerge from a side door of the flaming home, he said. 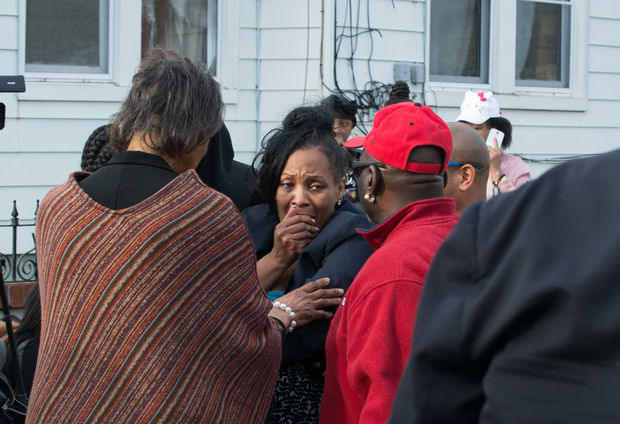 A relative victims grieves near the wood-frame home that was destroyed in a multi-alarm fire that killed five, including three children. (DNAinfo/Katie Honan)

Mayor Bill de Blasio and Fire Commissioner Daniel Nigro spoke at a press conference about an hour after the fire was extinguished, calling it a "tragic loss."

"Our members arrived in just over four minutes and were met by a house completely consumed with fire," Nigro said.

Although they valiantly fought the fire, they couldn't rescue anyone from inside, he said.

Family, friends and neighbors gathered on 208th Street after the fire to mourn the victims.

"Why did God let this happen?," one woman, identified by neighbors as a cousin of the family, cried out at the scene.

"Our fire marshals are investigating. They've been there all night. They're there now. They will determine what started the fire and where it started. We do not know that yet," Nigro said Monday.

Investigators hadn't found any smoke alarms in the building, the commissioner said.

Nigro dismissed an early theory that the fire began in a nearby car, but declined to speculate any more about the cause.

"Until we have the cause of the fire, we don't discuss what is not the cause. We'll wait til the marshals tell us," he said.