City Forced Us From Our Homes for Sandy Fixes Months Ago, Residents Say

Twitter Facebook Email More
Robert Combs moved out of his house in Rockaway Beach in October in anticipation of it being lifted through the Build It Back program. There hasn't been much work on it since.
View Full Caption
DNAinfo/Katie Honan

NEW YORK CITY — On the third anniversary of Hurricane Sandy, Mayor Bill de Blasio stood in front of rebuilt homes on Staten Island and vowed to complete the problem-plagued Build It Back Program by the end of 2016.

It was an ambitious promise to make to the thousands of Sandy victims in the city who have waited years for their homes to be rebuilt or lifted above flood level.

At the time, the program had only elevated 50 homes out of hundreds of applicants, officials said.

"The sad fact is, when I came into office, there wasn't real progress. Our mission is to get families back into their homes,” de Blasio said at the announcement in New Dorp Beach.

In a sign that his administration meant business, the city moved roughly 150 families in Queens, Brooklyn and Staten Island out of their homes in the weeks before the Oct. 29 anniversary so the homes could be elevated. City contractors put up fences around the houses in preparation for expedited work.

But most of those homes have since sat untouched for months, according to homeowners and sources involved in the Build It Back program.

“We forced people out of their homes just to get fences up and make it look like there was construction going on,” one source within the program said last month. “We were not even close. Only now is construction beginning. It was all a lie.”

The source and others said the mayor’s push last fall was all about optics and boosting Build It Back’s numbers — even though, at the time, the city hadn’t approved permits for the work and its contractors weren’t ready.

Homeowners who were moved out told DNAinfo New York that the Build It Back program hasn’t improved under de Blasio. Many said they had difficulty getting in touch with program representatives. Others said they waited months to be reimbursed for rent while they were out of their homes.

"I think they put all these fences up around the houses to make it look like they’re doing stuff,” a New Dorp Beach resident told DNAinfo.

The resident left his ranch home on Beacon Place in New Dorp Beach on Oct. 1, 2015. The Buildings Department didn’t approve the permits to elevate his home until February 2016, records show. And while fences have been up around his house since he and his wife left, work didn’t start on the home until March, he said.

The resident, a retiree who asked not to be identified for fear his speaking to press would cause more delays, was recently told that he likely won’t be able to move back into his home until July.

That’s nine months after he left.

She said they worked with construction managers in the fall to find homes they thought could begin work before the winter, around the storm's third anniversary.

But there are many steps before house lifts can begin — from utility disconnects to obtaining the proper permits from various city agencies. Homes have to be disconnected from utility companies, a process that Build It Back officials have worked to streamline.

Many homes had asbestos that needed to be removed prior to construction as well, she said.

And they've "tightened up the process" between move-outs and construction starts, although she didn't give specific timelines.

"We're all working towards the same goal, which is to get this program completed, so people who had their homes damaged by Hurricane Sandy could be in a built, resilient home," she said.

The city told homeowners before they moved out that the entire process would take between three to six months.

Meanwhile, the New Dorp Beach resident said he has spent more than $6,000 in rent since moving out of his home, and he’s also making mortgage payments. The city only started reimbursing him for the rent last month, he said.

Robert Combs, 46, was rushed out of his two-family home in Rockaway Beach in October, when Build It Back officials who inspected his home called it an "emergency case" due to damage from the 2012 storm.

He moved his family out as fast as he could, putting most of their possessions in storage. Construction crews put up a brace and removed the façade on his house, and then put a construction fence up days later in anticipation of a lift.

Nothing's been done since. And he's still waiting on rental reimbursement checks, which the program is supposed to provide.

An employee with the program who spoke on the condition of anonymity admitted they "butchered" last fall's move-out days, unaware that only certain construction crews could do the work.

The yearlong timeline also didn't take into account the multiple issues at each home, ranging from termite damage to zoning issues to open permits filed decades earlier that still needed to be closed. 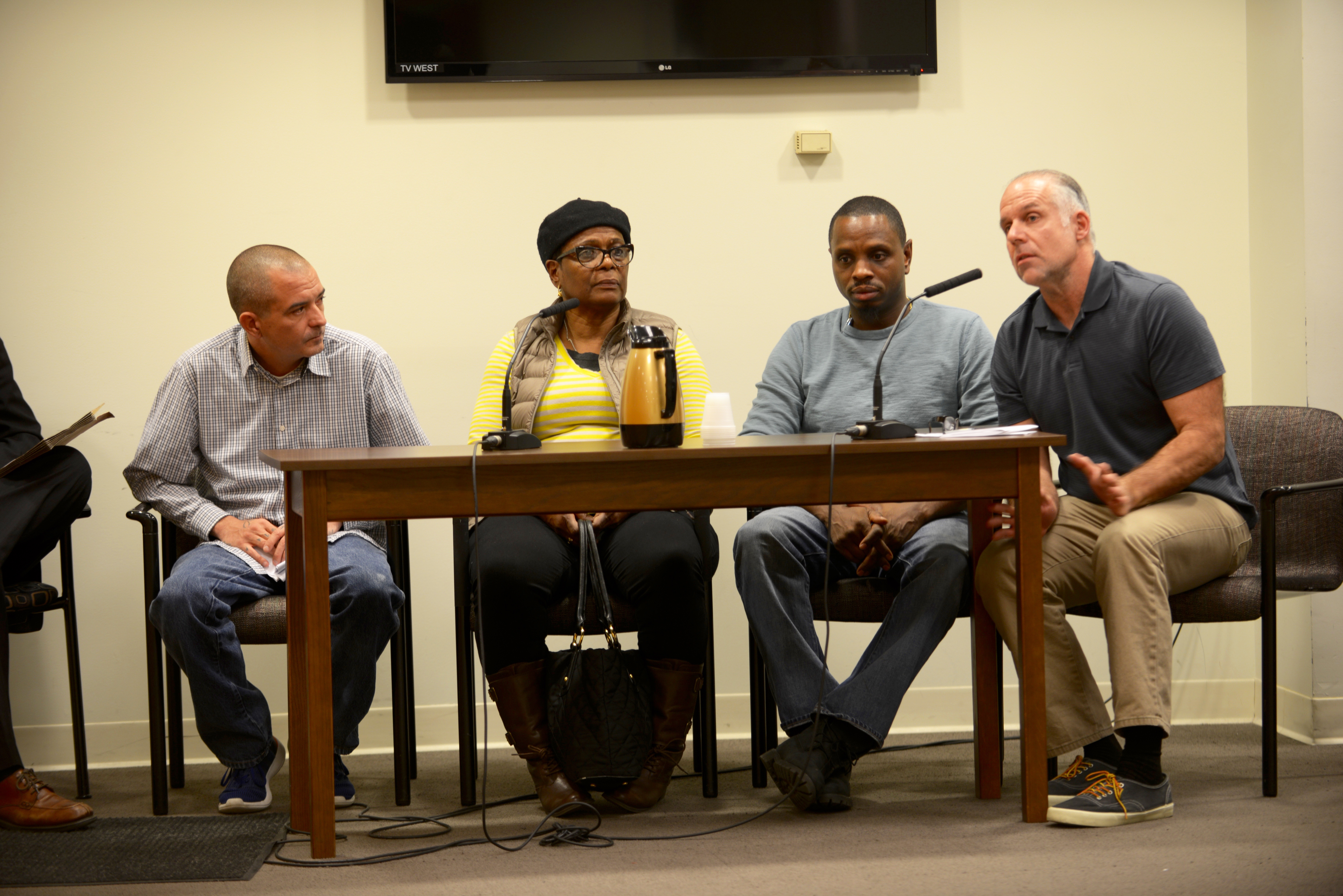 Residents working with the Build It Back program testified in March at a City Council hearing, sharing their stories of missing reimbursement checks and delays on repairs to their homes. (DNAinfo/Katie Honan)

Samuel Breidbart, a spokesman for Build It Back, said the program provides rental expenses and storage for the entire duration of a house lift, which lasts an average of four months.

But those residents who testified at a City Council hearing in March had already been out of their homes for at least six months without work even starting.

"I am now $4,500 in the hole by paying my rent and my mortgage on time, as I’m obligated," said Caufield, who visits his home every day only to see "an ugly green fence" but no work outside his house.

"The bureaucracy and red tape is beyond," he said.

The Build It Back program was designed to repair, elevate and rebuild about 2,300 homes over a five-year period. But it sputtered in its first year — prompting criticism from homeowners and de Blasio.

Last May the mayor asked the Department of Design and Construction and the Housing Recovery Office to shorten the time frame to three years and issued an “accelerated program directive.” Then in October the mayor declared the program will be completed in one year, near the fourth anniversary.

Breidbart said as of May, 64 homes have been either rebuilt or elevated completely, with 209 more already lifted and ready for new foundations and other work. Around 460 homes have started the rebuild and elevation process, he said.

They expect there to be 1,600 elevations by the end of the program.

But sources involved in the program said the chance of completing all the homes by December is nearly impossible.

“No way they will make the deadline,” one source said.

The accelerated schedule, the agreement to pay labor union wages and the heavy foundation designs have also led to ballooning costs, according to sources involved in the program.

Breidbart disputed this, saying the average cost of everything involved with a house lift is around $500,000.

The increasing costs have raised concerns that the program won’t be able to fund all the elevations and rebuilds.

Breidbart said the city has processed $1.4 million in rental reimbursements. However, the program is still processing more than 100 reimbursement applications, which should come monthly.

Councilman Mark Treyger, chairman of the Council’s Recovery and Resiliency Committee, said the slow pace of reimbursement checks is "unacceptable" since the Council worked with the administration and the Department of Housing and Urban Development to approve a rental assistance program.

"We heard of people paying rent and mortgage on a house they’re not living in, and then getting fined by city agencies on top of that," he said, adding that while the program has improved a bit, there's still work to be done.

"Build It Back needs to speed things up," he said, "and work on behalf of the people.”