Cyclist Mourned as 'Bright Person, With an Even Brighter Personality'

CLINTON HILL — Friends, family and activists are honoring a local cyclist who was killed earlier this month when she was struck by a car on a Clinton Hill street.

A white Ghost Bike memorial has been set up in memory of 34-year-old Lauren Davis, who was killed as she was riding on Classon Avenue, on the corner of Lexington Avenue, on April 15.

Davis’ boyfriend Mirza Molberg, who has worked with Ghost Bike for the last six years, set up the memorial along with family and loved ones Sunday following a bike ride led by Borough President Eric Adams in honor of Davis and another cyclist James Gregg who was killed last week in Park Slope.

Molberg remembered Davis as “a very bright person, with an even brighter personality.”

“She was so soft and so beautiful,” Molberg told DNAinfo on Monday. “She was a great person. She was very kind and compassionate.”

Molberg said Davis, who turned 34 last month, was an aspiring vegan baker who wanted to start her own baking business. She had a knack for crafts and embroidery — ornaments she made for the holidays would sell out at local stores, according to Molberg.

Davis was passionate about animals and fostered stray dogs and cats she found on the street, along with caring for her own cat and dog, Molberg said. She also loved art and studied vanitas paintings, a Dutch 16th- and 17th-century style that explores the worthless pursuit of earthly pastimes, according to Molberg.

Family members held a service for Davis on Saturday at the Greenpoint Reformed Church on Milton Street, Molberg said. 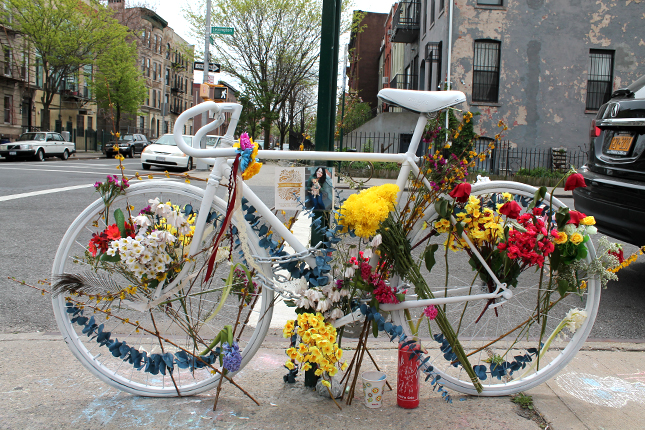 While police say Davis was riding in the wrong direction, Molberg said she was riding with the flow of traffic on Classon Avenue, a one-way northbound street.

“We’ve talked to a witness who was biking alongside of her going her going north,” Molberg said. “The police report says she was going south. I knew that was not right. She’s a safe rider.”

Molberg said Davis, an administrative assistant at Pratt’s Manhattan campus, was taking her usual route to work that morning from Crown Heights.

“Unfortunately someone reported this incorrectly and it has been horrible to see that,” Molberg said.

He said the couple would regularly take Classon Avenue instead of Bedford Avenue if they were traveling north to avoid roadwork on Bedford.

“We were always safe when we were biking together,” Molberg said. “Especially on a street like Classon which is really dangerous. It can be really tight.”

Although there is no designated bike lane on Classon Avenue, the street is marked with a bike route sign and is shown on the city's Department of Transportation map as a "signed route." Cyclists are encouraged to ride on the left side of the street, which includes riding inside the wide parking lanes, a DOT spokesperson said.

Molberg said Davis' family is working with the NYPD in the investigation.

Before Sunday’s ride, Adams called on the NYPD to avoid speculation about the cause of a crash until an investigation has been completed, to prevent the assumption that the cyclist was necessarily at fault.

“We should not assume that the cyclist was always the person responsible for a crash or had accepted the risk simply by climbing on a bicycle,” Adams said in a statement. “There must be a blue wall of silence until the investigation has been completed and we know the facts.” 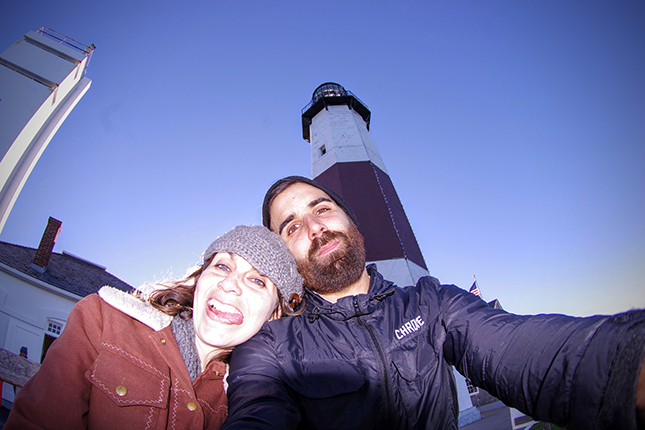 Adams also called on the DOT and the NYPD to expand enforcement of the citywide 25 mph speed limit and laws that prevent trucks from driving on most residential streets, according to a press release.

Gregg, of Park Slope, was riding southbound on Sixth Avenue near Sterling Place when he collided with a tractor-trailer that was also moving southbound, police said.

According to the DOT's maps, Sixth Avenue is not a truck route.

The truck driver was issued five summonses that included driving a truck on a street that was not a designated truck route, according to Adams.

Neither he nor the driver who crashed into Davis has been charged with a crime.

“Our streets must become a safe environment for all types of traffic, whether a person driving a car or riding a bicycle or an older person walking to the store,” Adams said.

“James and Lauren were lost to us much too early. We now have to honor their memory by working to prevent the next tragedy from occurring on our streets.”

A spokesperson for the DOT said a marked bike lane is not currently in the works for Classon Avenue.

"We are not currently planning to upgrade the signed bicycle route on Classon Avenue, but we are certainly open to suggestions from the community," the spokesperson said.

How to Score an NYC Rental Despite Bad Credit