The area’s median sales price was $1.92 million for just seven transactions that closed in the past quarter, besting DUMBO’s $1.585 million median price for its 27 closings, according to a third quarter analysis of sales data from​ Property Shark. (Both areas have fewer co-ops than many other Brooklyn neighborhoods, so more of their sales are for newer, pricier condos.)

The ranking looked at citywide data, and when taking Manhattan into account, Red Hook took the No. 8 spot across all boroughs, with DUMBO coming in at No. 10.

Since the low-lying waterfront area was devastated by Hurricane Sandy, a growing number of luxury projects have sprouted in the transit-challenged neighborhood with deep working-class roots.

The 22-townhouse development known as the King and Sullivan townhomes — which replaced a dilapidated, full-block warehouse along Sullivan and King streets and started sales in 2016 — helped propel the neighborhood into the borough’s top spot, the Property Shark report noted.

“The massive project is quite uncommon for the Brooklyn scene, and for Red Hook as well, but it proved to be a real success, bringing in significant growth to the borough’s residential market,” read a blog post about the data. 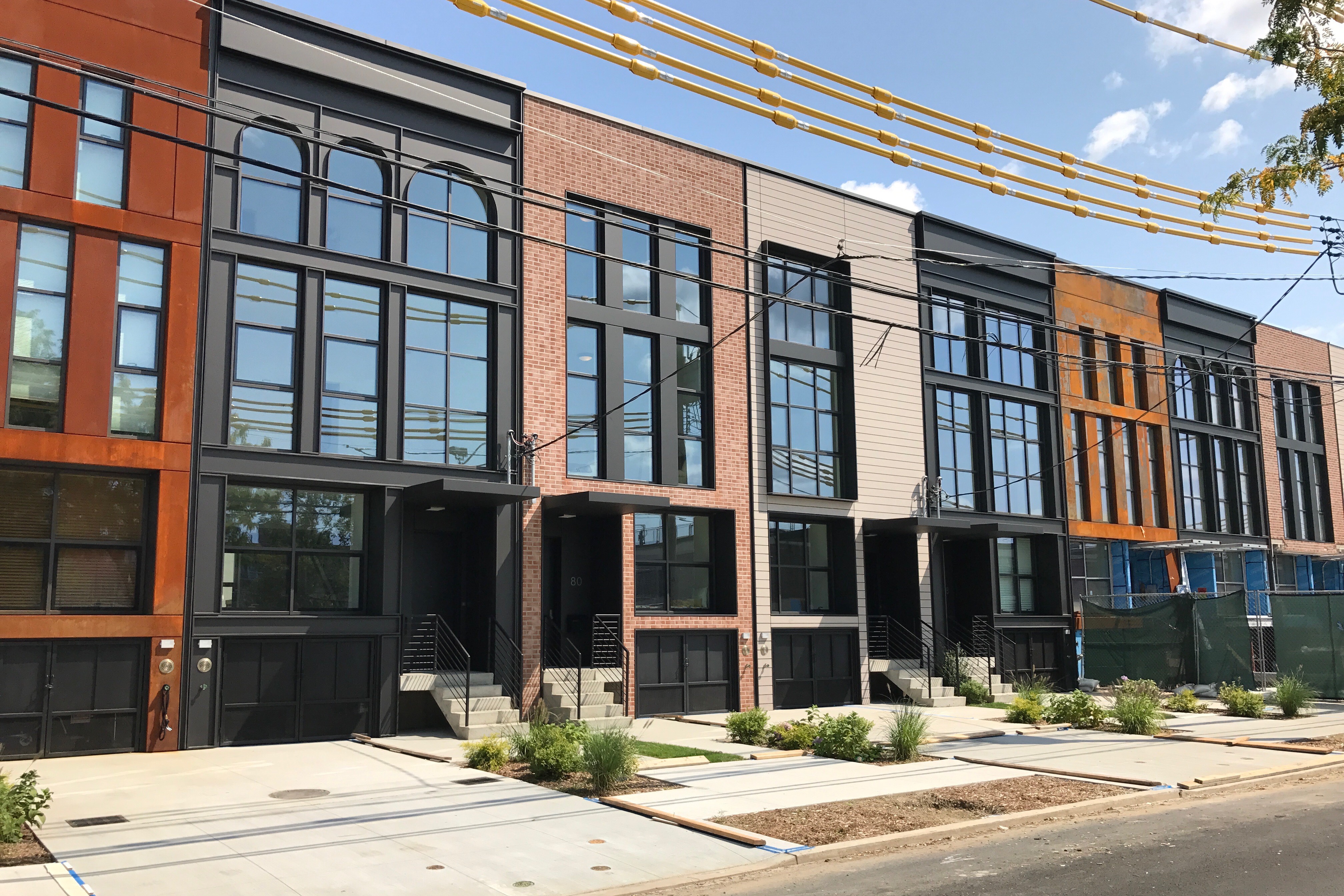 The development's single-family homes, designed by AA Studio, were inspired by Amsterdam’s Eastern Docklands, an area where renowned architects transformed the old docks and port buildings into a modern residential area.

Four homes in the development are currently listed on the market, ranging from $3.08 to $3.41 million, and all experienced price drops about 20 days ago, according to Streeteasy. The least expensive unit saw its price slashed about 5 percent, by $170,000, while the priciest unit had been cut more than 7 percent, by $265,000.

Other new high-end projects include 160 Imlay St., which renovated the 1910 New York Dock Co. building into a condo with roughly 70 units.

Four units available in the still-unfinished project range from a one-bedroom asking $1.325 million to a three-bedroom asking $3.235 million. Some of the units also saw price drops, with the least expensive dropping two weeks ago by $100,000 (or nearly 5.6 percent), while the most expensive one rose by $483,000 (or nearly 13 percent) about three months ago, according to Streeteasy.

Chris Sheller, a broker with Corcoran who has lived in Red Hook for 15 years, said that some properties in the neighborhood are trading at similar prices per square foot as in neighboring Carroll Gardens.

Prices are propped up in Red Hook because the housing stock is fairly limited in the mostly manufacturing area, and zoning prevents dense housing from being built, he noted.

“Red Hook is no longer an afterthought,” Sheller said. “A lot of people are seeing that there is something unique and special in Red Hook that a lot of people who’ve lived there a long time thought was their little secret.”

The neighborhood's post-Civil-War era warehouses on cobblestone streets are home to a bevy of small-scale manufacturing companies, while the giant IKEA store looms large on the waterfront.

Its foodie scene is anchored by restaurants such as Hometown Bar-B-Que, the Good Fork, the Red Hook Lobster Pound and Fort Defiance — though locals note there is still no sushi restaurant — while food manufacturers such as Raaka Chocolate and Van Brunt Stillhouse offer tastings and tours.

The area is home to the borough’s largest public housing development, the Red Hook Houses, as well as one of Brooklyn's newest and most sought-after private schools, Basis, where next year’s tuition costs $30,200. Brokers say the school has lured new families to the area.

Red Hook was considered “up-and-coming” before the 2008 real estate downturn and failed to take off, Sheller noted.

It was then considered “up-and-coming” prior to Sandy, which slowed things down again.

“It’s up-and-coming again, and it seems to have legs this time,” Sheller said.

And while its lack of a subway line has kept it from feeling “overrun,” Sheller said the new ferry service has improved commutes for many residents.

Overall, Brooklyn had 21 out of 50 neighborhoods on Property Shark’s list.

The priciest neighborhood across the five boroughs was the Flatiron District, with a median sales price of $4.09 million for its 88 sales. The area knocked TriBeCa from its perch, as sales activity in the area slowed down, the report noted.

Additionally, there were nine Queens neighborhoods featured in the top 50 — with the borough's No. 1 neighborhood, Belle Harbor, also affected by Sandy.

The affluent area, which sits on the western part of the Rockaways, had a median price of $1.0752 million for its eight sales in the third quarter, earning it the 27th spot on the list.