COBBLE HILL — A buffet of skewered pumpkins will return to a Cobble Hill street corner after a three year hiatus, said the Brooklyn artist behind the Halloween installation.

In 1998 artist Jane Greengold started impaling pumpkins on the spiked-top iron fence in front of her home on the corner of Kane Street and Strong Place. And after Halloween they slowly rotted away - adding to the holiday's ghoulish delight.

The macabre ritual sacrifice of carved pumpkins came to an end when Greengold moved to Fort Greene in 2013, but after neighbors urged her to resurrect the neighborhood tradition, she and any locals who wish to join in, will once again spike dozens of pumpkins on the Cobble Hill fence.

"We stopped really because it was a lot of work," said Greengold. "But it's so much fun and people kept coming up to me to say how much they loved it."

Greengold scouted out possible fences that could carry on the Halloween ritual, including a fence with slender spikes across from the Brooklyn Academy of Music in Fort Greene, but for one reason or another property owners were not interested or it simply was not feasible.

"You need to have a base to do this," said Greengold. "A place to keep everything, to store the candy for the kids, and I know the owner of the house so it makes sense to do it where it began." 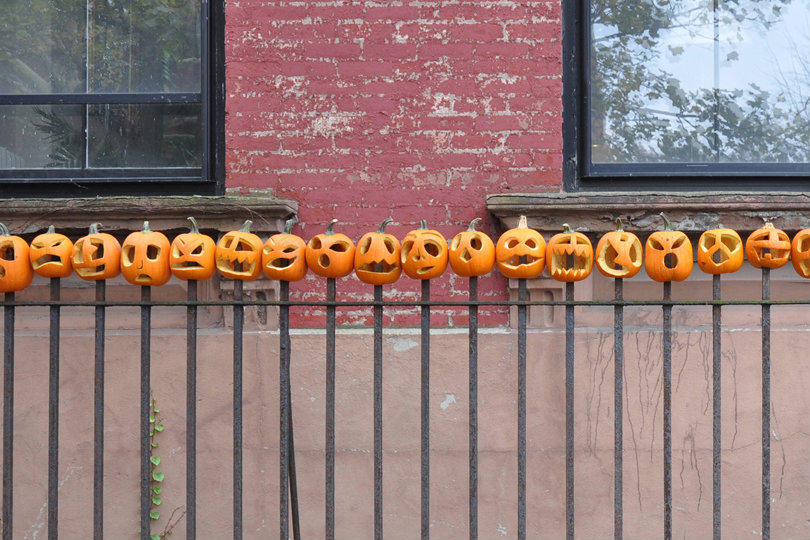 Dozens of pumpkins are impaled on the iron spikes on Halloween. They remain there for months, said Greengold, explaining that their decay adds to the spookiness of the piece. (Jane Greengold)

Locals who impale their own creepy creations add dozens more of the vibrant squash. In the collaboration's last year families added 65 extra pumpkins to the mix.

And the pumpkins may even stay up until Christmas, undergoing what Greengold refers to as a "Dorian Gray" transformation from mostly cheerful faces to decaying mounds, she explained.

Those who plan to give their pumpkin a gory demise should pick a squash that is taller than it is round with a four-and-a-half to five-inch diameter.

Resist the urge to cut off the top and instead slice a three inch wide square hole in the bottom's center, then carve a face and remove the innards through the pumpkin's freshly carved facial features, explained Greengold.

She will be setting up her work Oct. 31 from 3 to 7 p.m., as the neighborhood’s trick-or-treaters begin their holiday festivities.