PROSPECT HEIGHTS — Parents and local leaders are calling for safer streets around a Prospect Heights school after two children and their father were struck and injured near the building this week.

A first-grader on a scooter, her sibling inside a stroller and their father were struck by an SUV on St. Marks Avenue between Underhill and Vanderbilt avenues while walking to P.S. 9 on Wednesday, a witness, the school and police said.

Andrew Case, a P.S. 9 parent whose daughter and son both attend the elementary school, was walking on St. Marks Avenue when the crash happened, around 8:20 a.m., according to EMS.

“I heard screaming and I saw the SUV and I saw a stroller overturned in the sidewalk,” he said.

The family had tried to cross the street mid-block, something many families do because of a construction site on one end of the street that pedestrians often try to avoid, Case said.

The children and their father were taken to the hospital for treatment, but all were in stable condition according to EMS officials; a notice from the school sent soon after the collision said all three “are okay.”

The driver stayed at the scene, Case said. The NYPD said there was no criminality in the crash and no arrest was made. 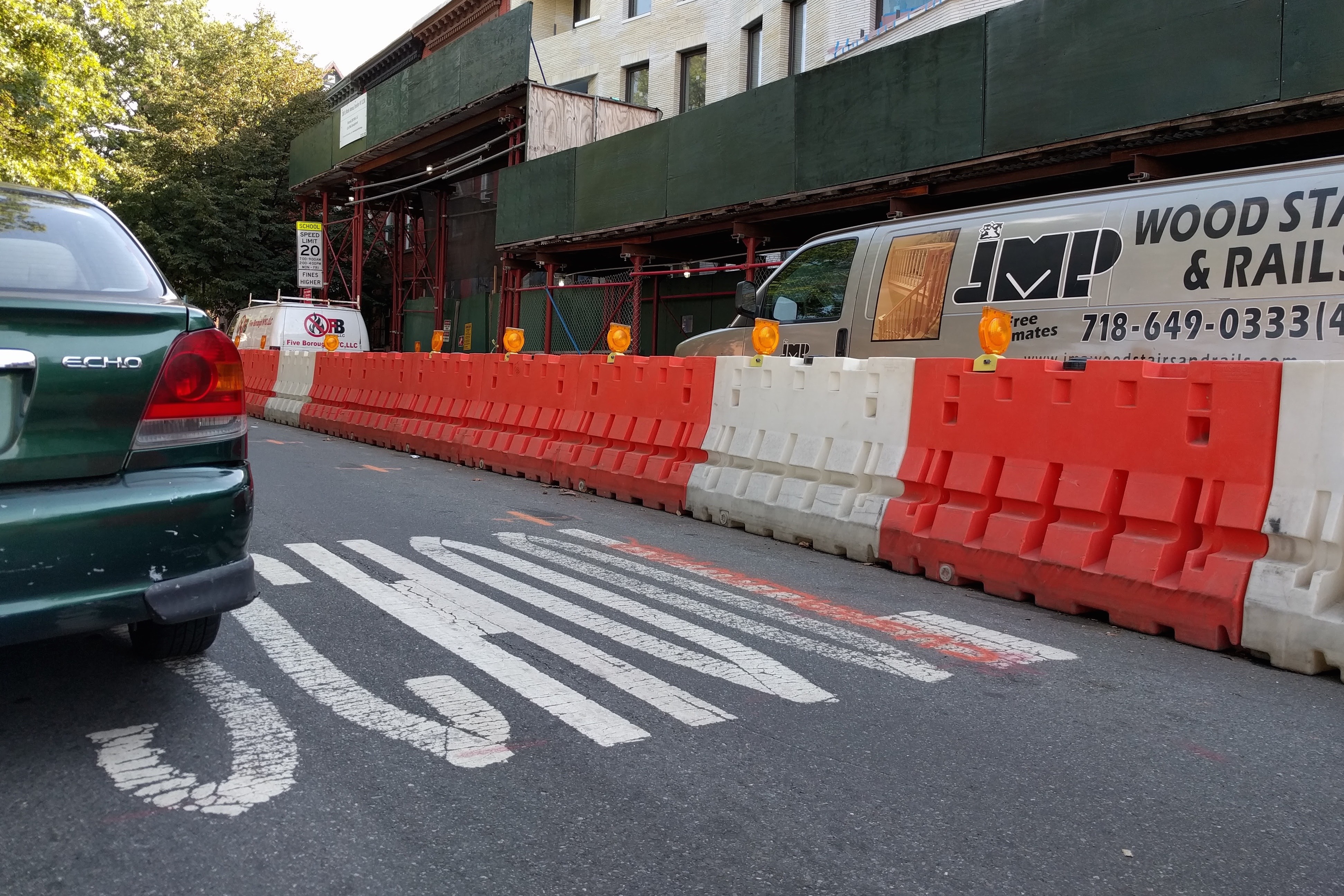 The collision took place on St. Marks Avenue between Underhill and Vanderbilt avenues, pictured above. Construction on the block makes navigating the street challenging, one P.S. 9 parent and witness to the crash told DNAinfo. (Photo credit: DNAinfo/Rachel Holliday Smith)

Construction is ongoing at 280 St. Marks Ave. where a five-story condominium building is replacing a former parking garage on the street’s south side.

In response to the incident, the school has scheduled a Safety Town Hall meeting on Thursday, October 26 at 6 p.m. to discuss the crash and what may be done to improve walking conditions in the area.

Case said the school community is “very concerned” about the incident, and many parents are interested in talking about poor conditions for pedestrians on the streets adjacent to P.S. 9, particularly on St. Marks Avenue.

“It’s a street that’s got a lot of children on it in the morning. It’s got a construction site. It’s got a warehouse with pallets that get left out in the street,” he said.

He added that no one is “trying to criminalize anyone” for Wednesday’s crash.

“We are trying to think of ways to make this street safer,” he said.

The crash has gotten the attention of Prospect Heights Councilwoman Laurie Cumbo, who tweeted Thursday that her office is working with the street safety group Transportation Alternatives to draft legislation “to address additional needs for street calming methods near schools.”

Her office said they submitted a preliminary bill to the City Council that would require the Department of Transportation to study “a multi-pronged traffic calming approach” around public schools.

Transportation Alternatives deputy director Caroline Samponaro said Cumbo’s office reached out to the group after Wednesday’s crash. Though no concrete solutions for P.S. 9 have yet been proposed, she said two current city initiatives for pedestrian safety near schools — Vision Zero “slow zones” and the Safe Routes to School program — are possibilities for the Prospect Heights school, which are not currently included in either program.