BROOKLYN — If you want to make ethically minded purchases when decorating your home, there are a growing number of Brooklyn-based companies making that easier through their own support for the local economy, their workers and the environment.

But it’s not cheap to manufacture locally while employing sustainable and socially aware employment practices.

And while there is a growing base of shoppers who want to use their purchasing power in socially conscious ways, oftentimes customers just want to buy pretty things. These companies reflect the artisanal ethos and trendy aesthetics that Brooklyn is now known for:

This East Williamsburg-based company that makes custom furniture is an outgrowth of M. Fine Lumber, a company that has been selling wood salvaged from Tri-State area buildings for nearly 85 years.

“We were green in 1933,” said Merritt Fine, who is the family’s fourth generation to run the business.

Back then, reclaimed lumber was used as a temporary means to support infrastructure like subways and pier bulkheads, he said.

M. Fine Lumber saw a turning point in 2009 when it got a contract from Brooklyn Bridge Park to reuse the wood from a warehouse on a pier there to make things like picnic tables and benches for the park. The company then became the supplier to restaurants such as Bare Burger, Shake Shack and Williamsburg’s DuMont Burger. 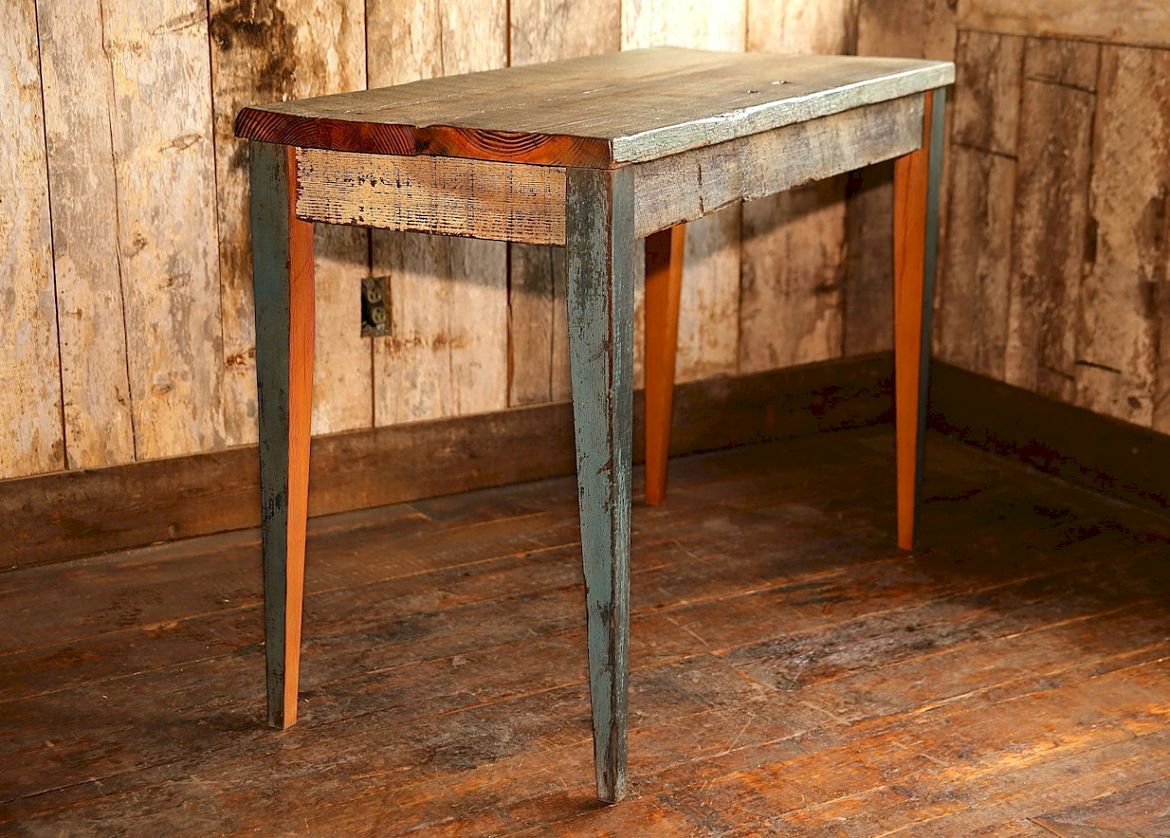 In 2012, Fine helped spin off Brooklyn Reclaimed, after fielding many inquiries about making tables.

This fall the company is moving to a new space at 200 Morgan Ave., around the corner from its existing space, where it will have a bigger showroom and stock off-the-shelf items and finished wood that DIY-ers can use for projects.

Fine credits his longevity in the business to his willingness to change and “cater to the trends of the time,” as well as luck.

“The Williamsburg boom was a big part of our success, especially the coffee shops,” Fine said.

Refoundry is just wrapping up its pilot program teaching former inmates how to make their own furniture from reclaimed materials and then helping them launch their own small businesses.

Ten participants in two years have since started their own ventures, and one is going to social work school, said the nonprofit’s co-founder Tommy Safian.

He is now trying to raise money to launch an expanded version of the program based in the Brooklyn Navy Yard.

The fact that the participants use discarded materials is significant not only from an environmental perspective, Safian explained.

“Our participants feel discarded by society. When they make things out of discarded materials that have no value, it’s very personal,” he said. “People, who they usually thought looked down on them, bring these objects into their most intimate spaces.”

The transactions with the customers also are critical in helping the participants reintegrate into society, he added, while breaking down shoppers’ possible preconceived notions.

“When you have people from different parts of society — and generally have stereotypical views of each other — and then have a mutual recognition of value and common goals, it’s the building block of community,” Safian said.

The products made by Refoundry’s participants are sold at Brooklyn Flea, West Elm and will be featured in a gallery at the forthcoming ABC Carpet & Home store in Sunset Park’s Industry City, Safian noted.

When artist and designer Shanan Campanaro got into the wallpaper business, opening her Southside Williamsburg studio in 2008, she wanted to rethink the process.

“Wallpaper is pretty toxic. There’s a lot of vinyl in paper inks. It off-gases. It’s not super healthy and there can be an intense amount of construction waste,” she said.

“All of our fabric and wallpaper is made in the Northeast with natural cotton and water-based inks. We print digitally, which eliminates run-off,” explained Campanaro. 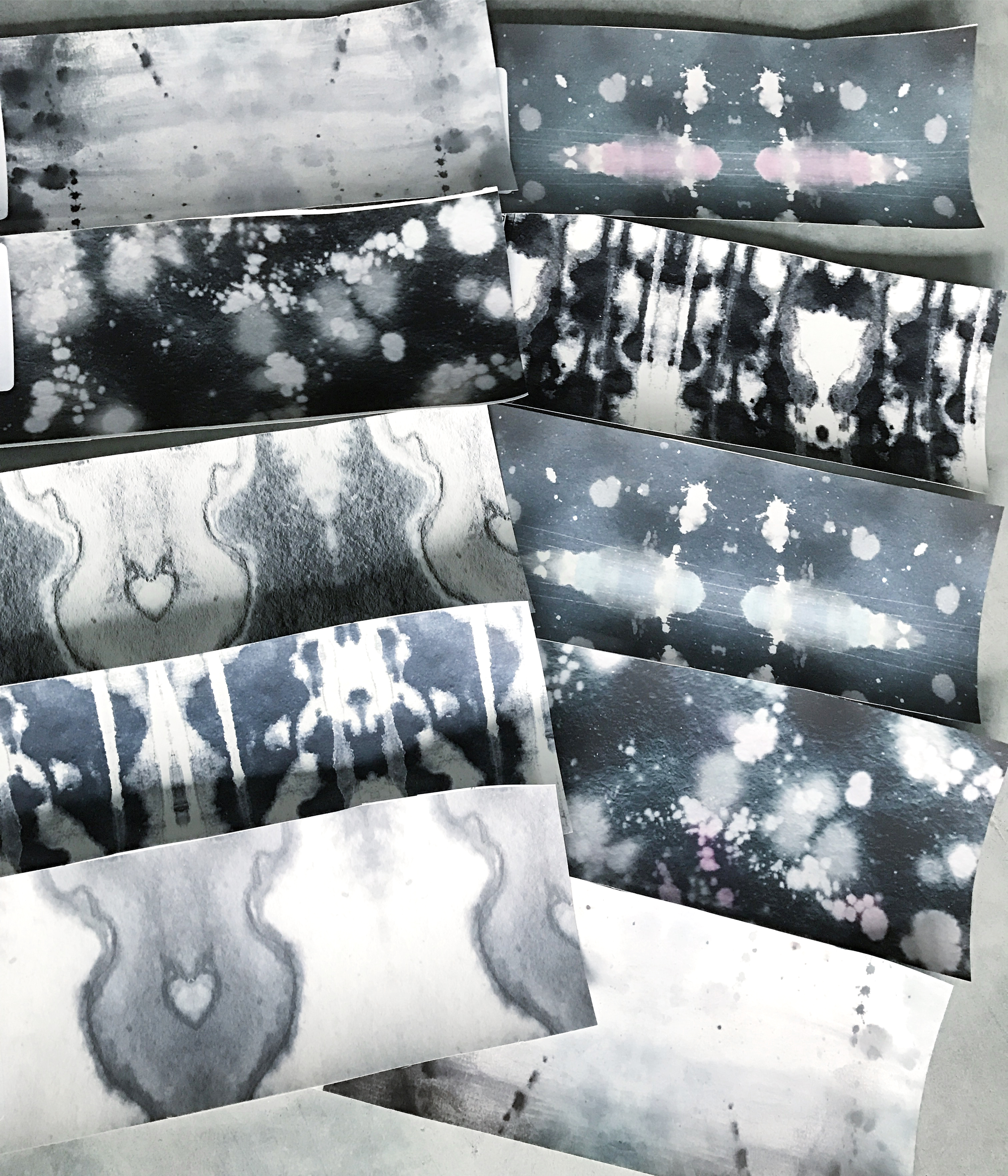 She works with women’s collectives around the globe that train impoverished women in making products like baskets using donated fabric scraps from Eskayel and is working with Nepalese rug makers to support this handmade craft that could otherwise die out in this age of machinery. (Finding natural dyes is still a challenge though, she noted.) The company also gives 1 percent of sales to environmental groups such as Greenpeace and Surfrider.

“I’m a big surfer and I love to travel,” Campanaro added. “I don’t want to be doing something to make money that would be destroying the earth.”

Most of her buyers don’t necessarily care about sustainability but appreciate the level of artistry, Campanaro said. Though, lately, she’s noticed an uptick in well-heeled families wanting her non-toxic goods for baby rooms. 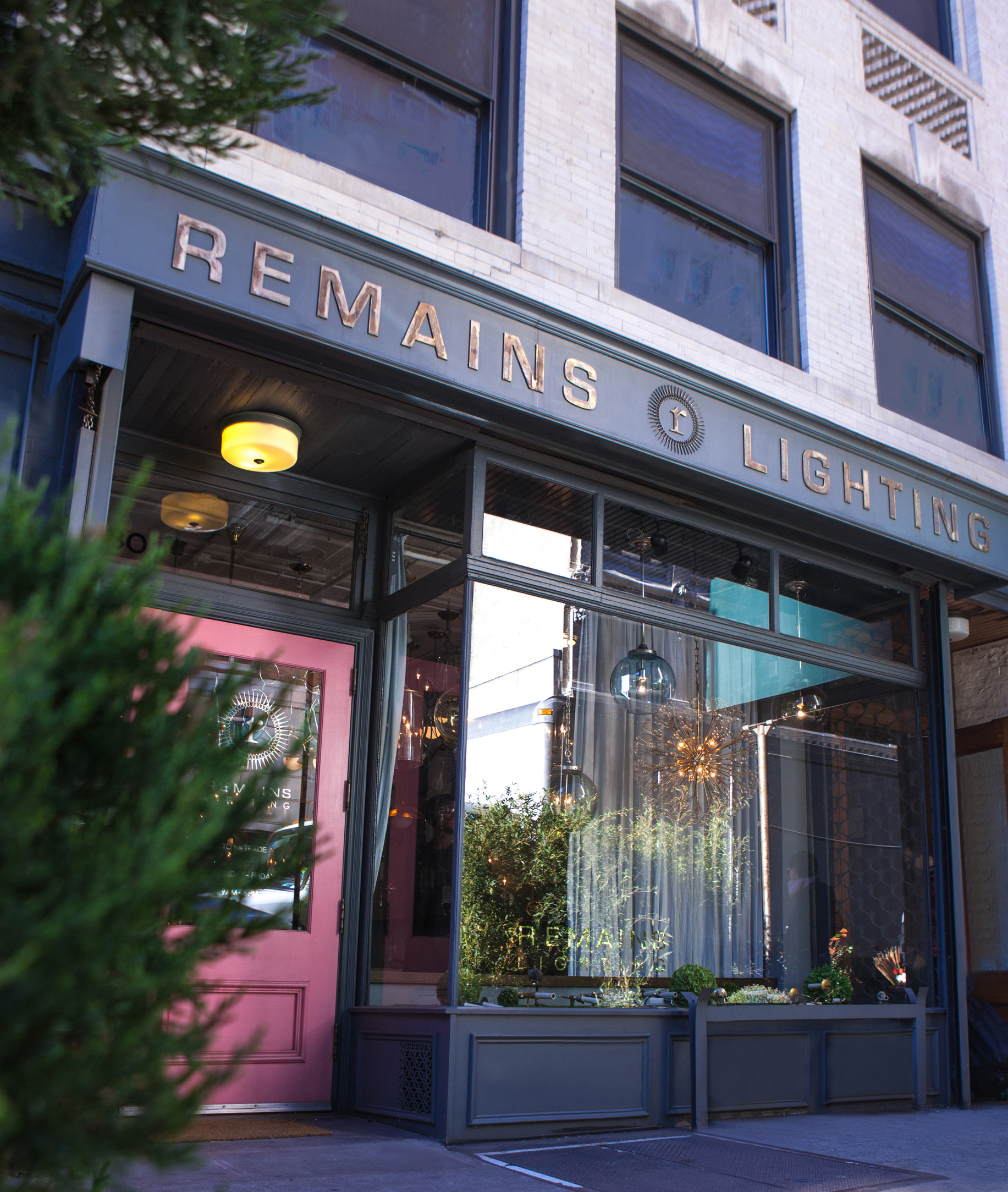 Remains Lighting prides itself on marrying style and sustainability, displaying both vintage lighting at its Chelsea showroom at 130 W. 28th St. alongside made-to-order pieces manufactured in its eco-friendly LEED-gold factory in Bushwick.

“We use environmentally efficient manufacturing processes from start to finish,” explained David Calligeros, founder and owner of Remains.

Recycled brass, for instance, is fitted on machines with energy-saving systems that are powered by a solar rooftop and wind farm upstate.

The factory has a “daylight harvesting” system and sophisticated sensors to switch its own lighting fixtures on and off when needed. There are retractable awnings on thermostatic sensors to help regulate natural heating and cooling.

A storm water retention system captures rainwater that is used for green spaces, like the garden bed the company’s garden committee fills with veggies and herbs for the employees to use. 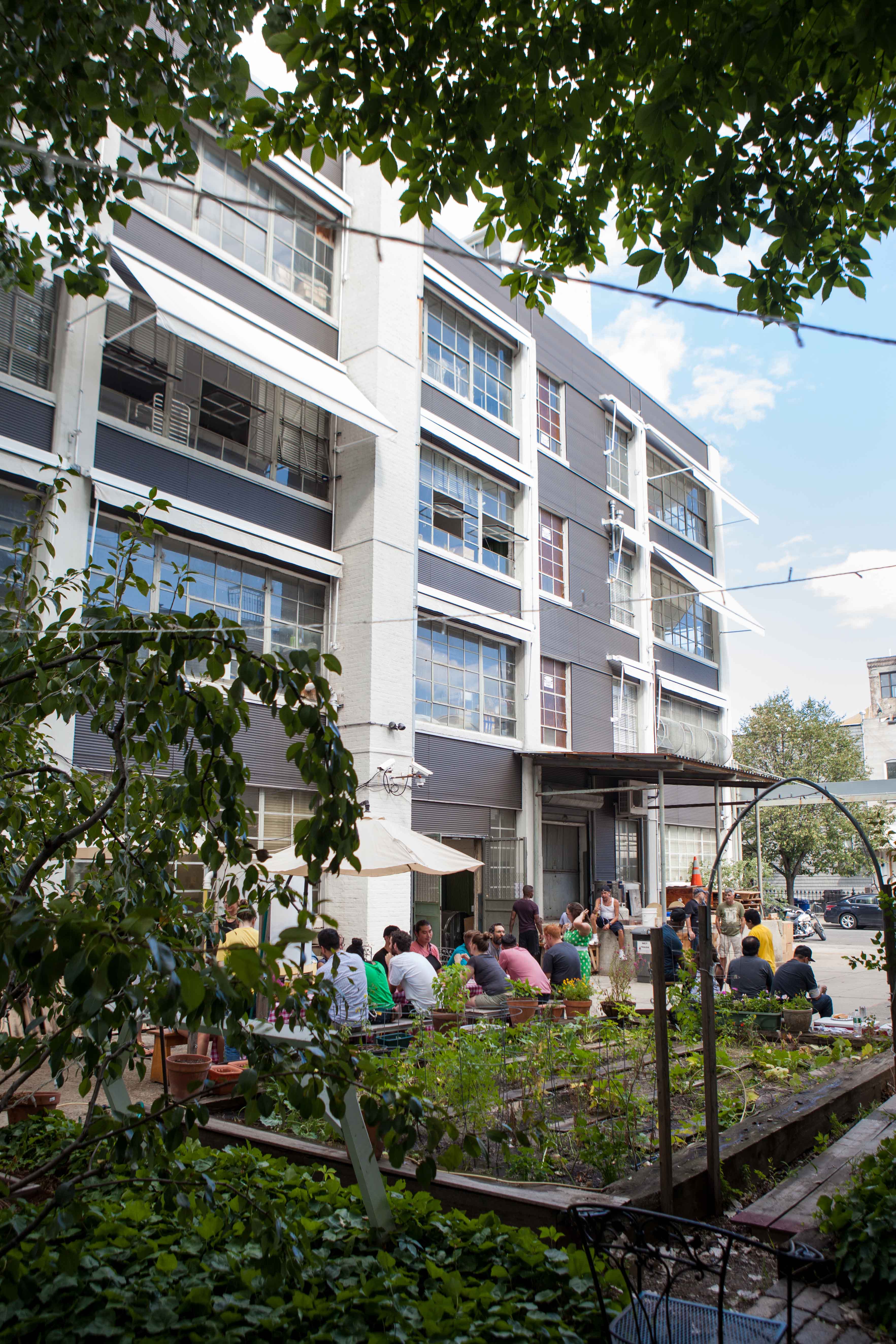 The comapny barbecue, using the veggies grown at the Bushwick factory. Photo courtesy of Remains.

Remains also is committed to workforce development, Calligeros noted, offering in-house training on metalwork and hiring through organizations like Brooklyn Woods and Osborne NY that employ and train workers who have faced significant challenges to employment.

► Ice Stone
Countertops made from recycled glass and cement

Ice Stone has diverted more than 16 million pounds of glass from landfills since starting up in the Brooklyn Navy Yard about 15 years ago (thanks to angel investors like Ben Cohen from Ben & Jerry’s), the company says.

“We are all about sustainability,” said Ashon McCollin, the company’s marketing manager. 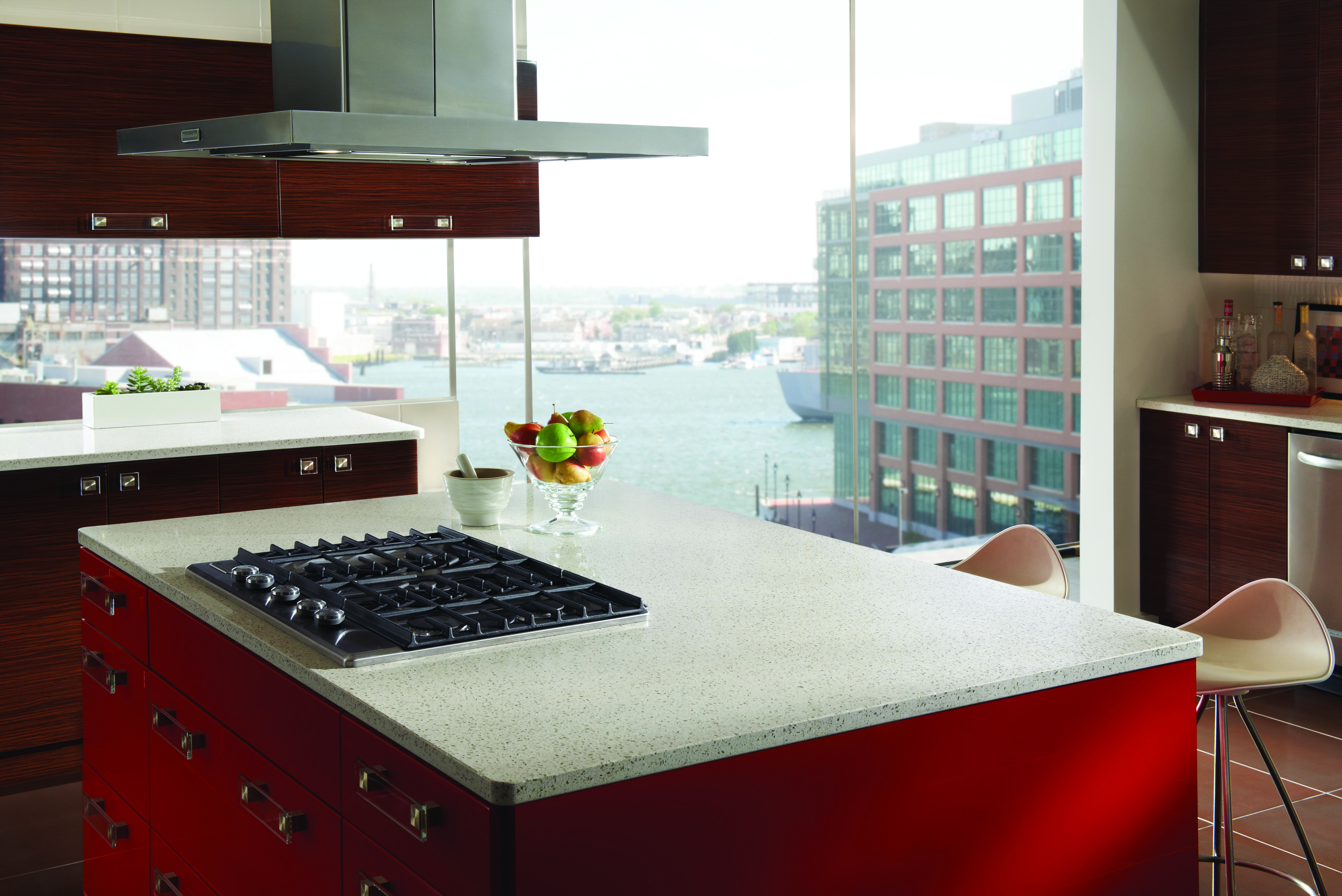 A certified B Corp — which means it meets strong social and environmental standards — Ice Stone is focused on the “triple bottom line” of people, planet and profits, he said. (The counters cost a bit less than granite, he added.)

Beside the eco-cred of the product itself — made with non-toxic materials — the sky-lit factory itself is energy efficient, using as little lighting as possible and electric and hybrid forklifts. Ice Stone also not only ensures its workers earn livable wages, McCollin said, its staffers also own a percentage of the company.

“We care about employees,” he said.