BROOKLYN — When building a mansion, the new money in Brooklyn wants all the charm of the borough's historic townhouses with all the flash of high-tech, eco-friendly living.

Until about three years ago, the economics of building new single-family homes made them extremely rare, said real estate expert Jonathan Miller.

But as prices for existing townhouses in the borough have skyrocketed, building has become more attractive.

“It’s been a long time coming, and it would not have happened 10 years ago,” Miller said. “I think you’re starting to see them because you have people willing to buy townhouses for $10 million. The math is starting to work.”

In Boerum Hill, for instance, where one of these new mansions is located, the median price of a townhouse shot up more than 150 percent from $1.225 million in 2012 to $3.025 million in 2017, according to Miller, who compiles the data for Douglas Elliman.

While the prices may seem exorbitant for Brooklyn, similar homes in Manhattan would likely cost twice as much, experts say.

Previously, buyers did not want newly constructed townhouses, placing a premium on historic ones they would gut from wall-to-wall, Miller noted.

“Looking at the market over the years, standalone, newly constructed townhouses were not accepted by buyers,” he explained. “The façade was the key component of it. Now, in many ways you’re seeing this sort of development unleashed from the confines of period-type properties.” 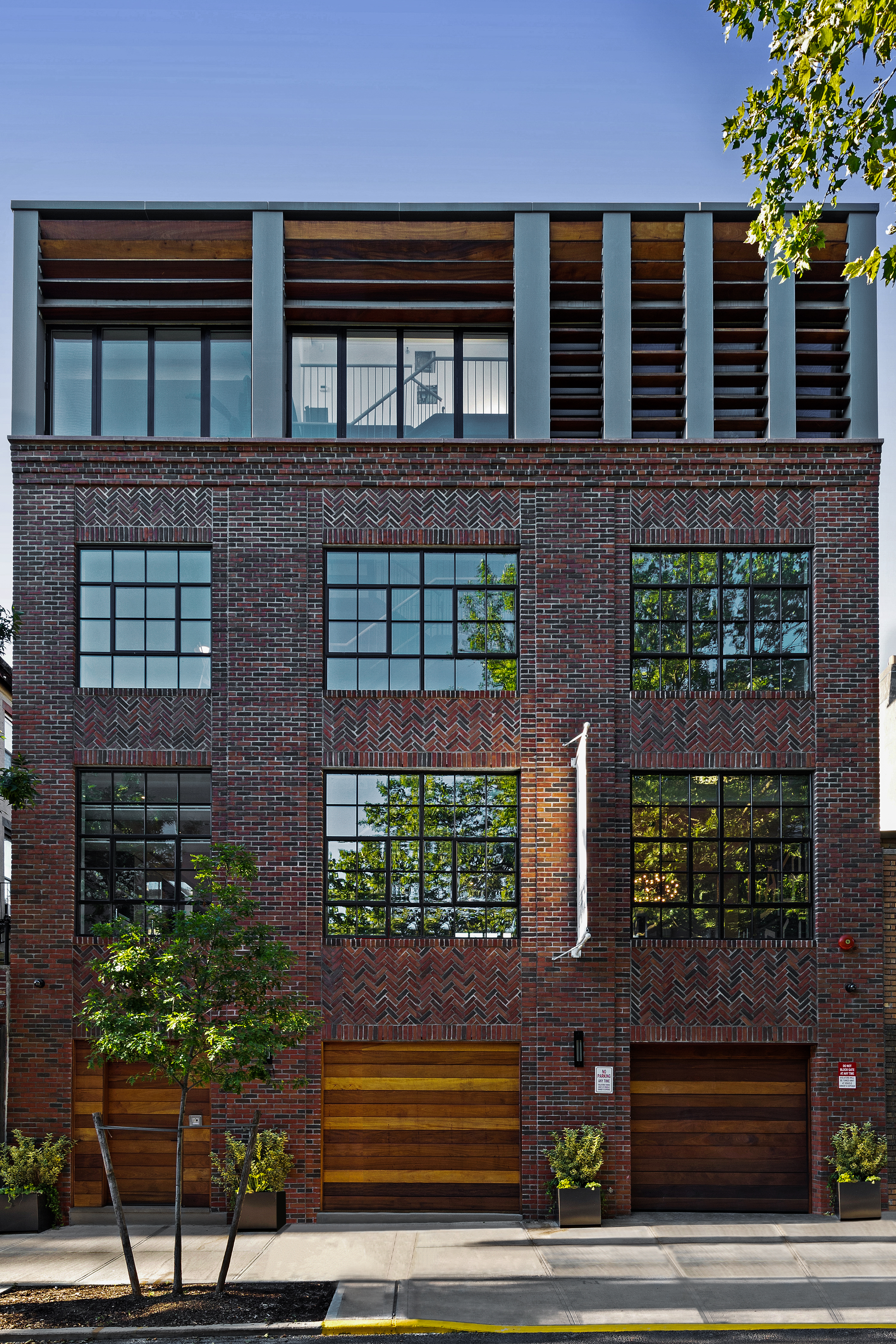 The 35-foot-wide red brick-and-walnut façade of this townhouse — which replaced a one-story garage — has handmade oversized steel-framed windows, referencing the existing architecture of the neighborhood and the borough’s industrial past.

Designed by Gowanus-based firm, Workshop DA, this townhouse has wide plank oak flooring laid in herringbone pattern and custom millwork throughout, including decorative walnut shelving along the central staircase that’s in addition to the home’s elevator.

“From the façade to the interior, this represents what Brooklyn has become,” said Brendan Aguayo, of Halstead Property Development Marketing, whose firm listed the home about two weeks ago. “The interiors feel very beautiful and warm and intimate.”

The parlor floor has 12-foot-tall ceilings with a 29-foot-wide great room with a glass wall that opens completely onto an outdoor “great room” with a full outdoor kitchen, walnut pergola and built-in seating. Meanwhile, indoors, there’s also a sunny, eat-in white-and-walnut chef’s kitchen. 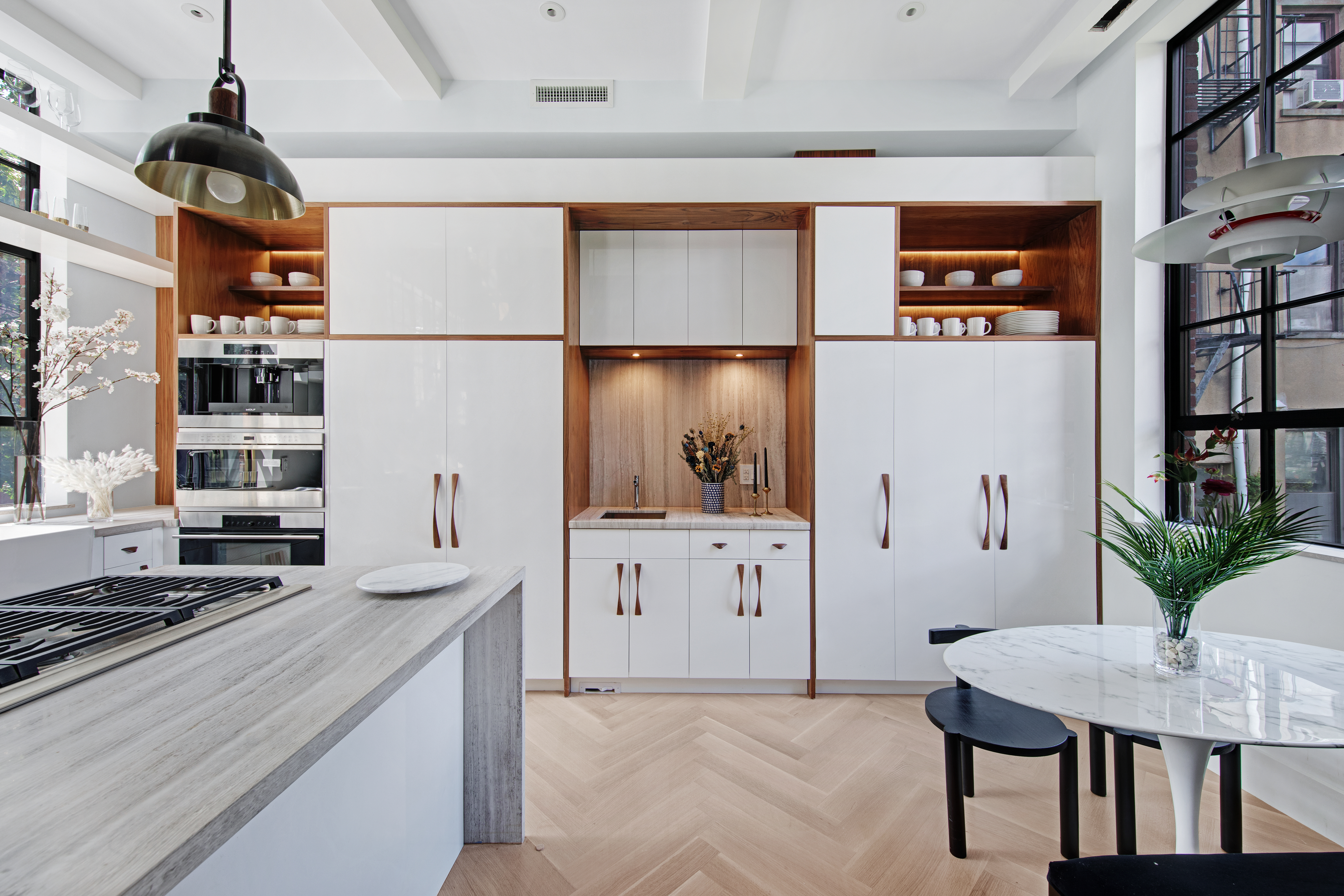 The house has a multi-car garage with a Tesla charging station and space to accommodate a separate home gym or an artist’s studio. 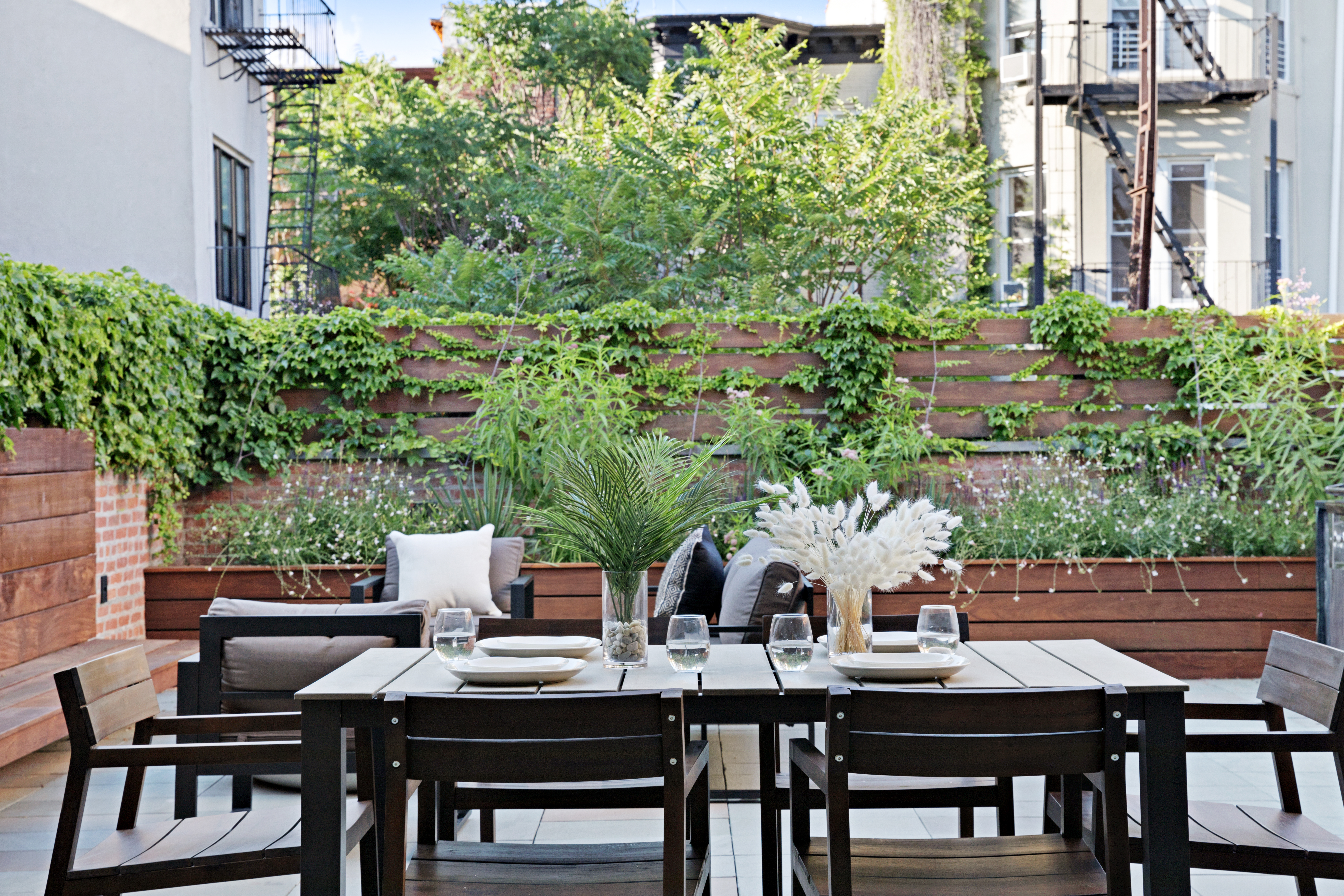 Other modern, “condo-level” amenities include a central vacuum, and a laundry chute — something that Aguayo’s mom had in her 100-year-old Park Slope house, he noted.

“It fits into the block,” Aguayo added. 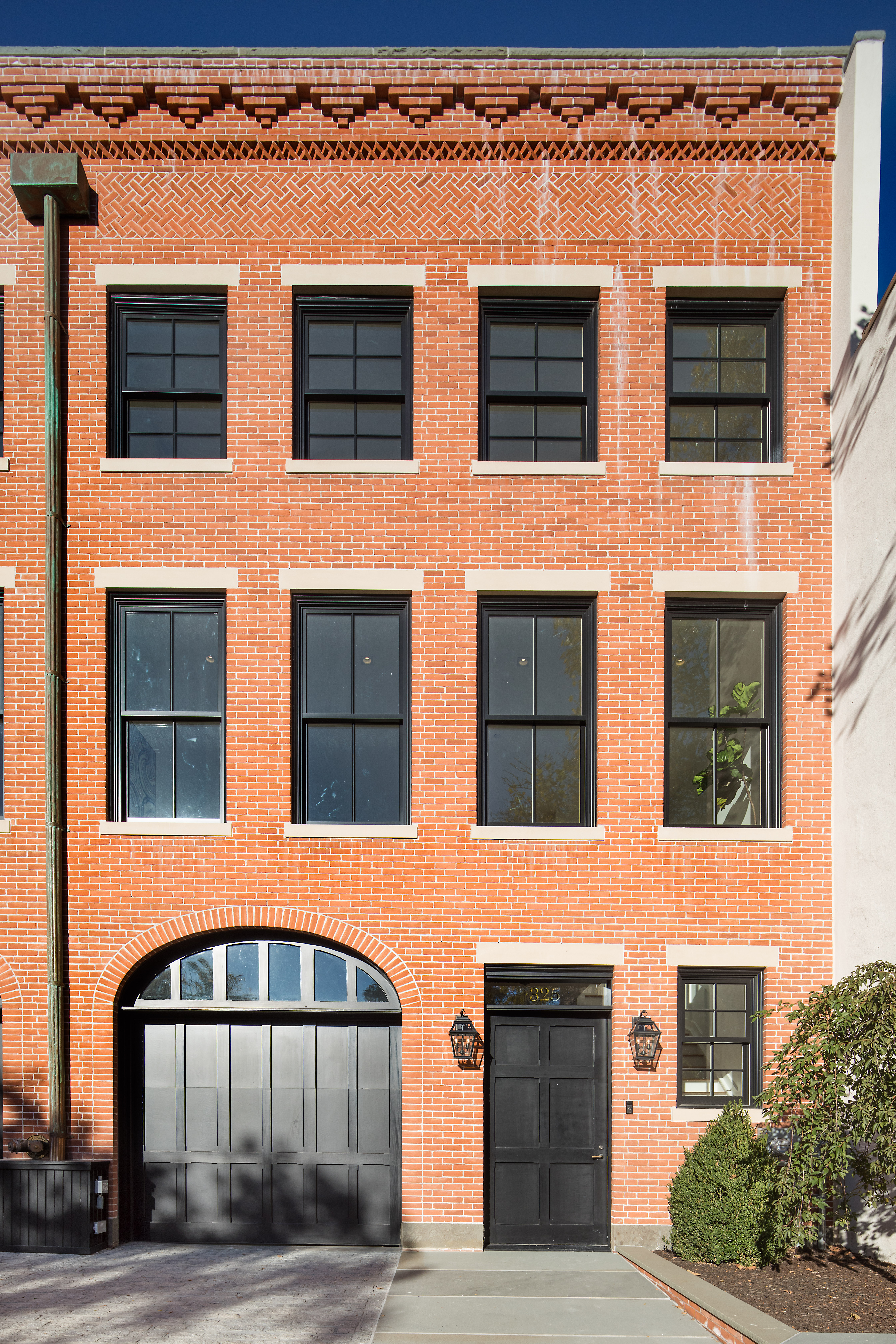 This house, one of four in a row of new townhouses, borrows heavily from the carriage house aesthetic.

“It falls into that quintessential carriage house look that we see in Brooklyn, the backhouses of these grander homes,” said Kim Soule, of Compass.

That architecture gives it a “cozier” feel — though at nearly 6,000 square feet, this house is still “enormous,” as Soule points out. 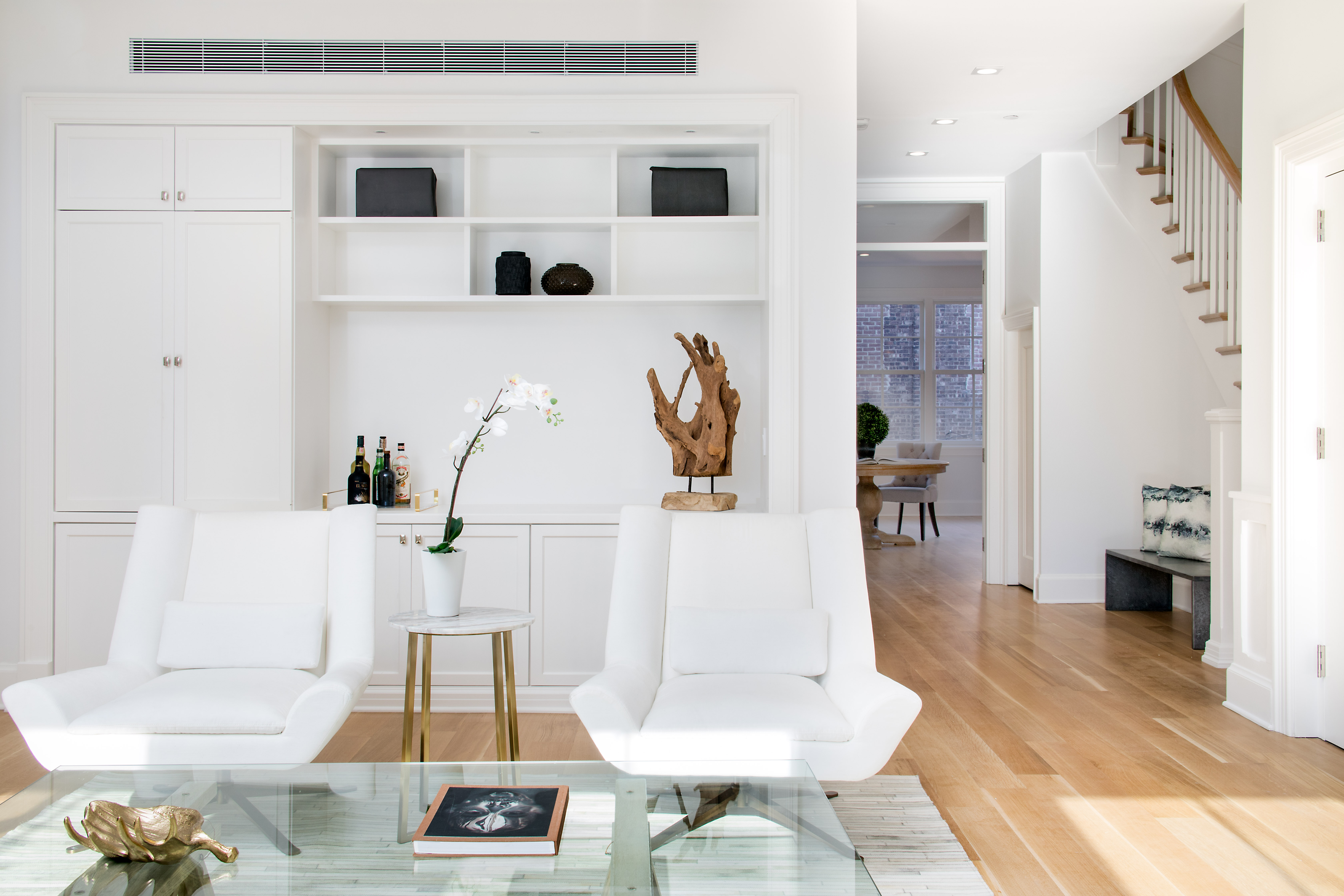 Part of the living room. (Photo courtesy of Compass)

In addition to a private elevator and a garage, the house features skylights in the floors so when you’re in the basement, you can walk in without having to turn on lights, Soule noted.

And while the cobblestone drive harkens to a historic look, this one has a snow melt system, Soule noted. 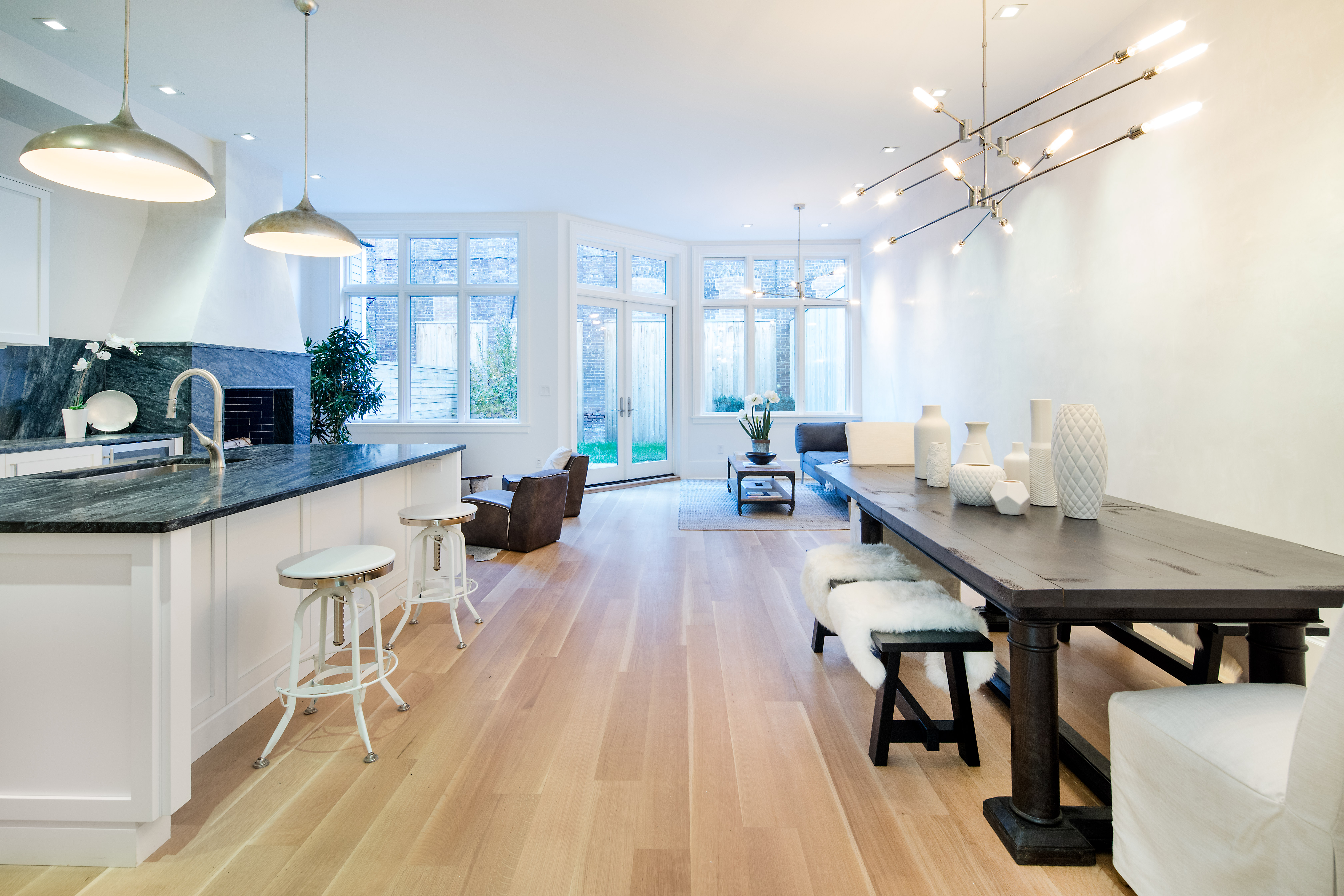 The kitchen (Photo courtesy of Compass)

In addition to a backyard, the top floor has porches in the front and back flanking a space with a cathedral ceiling that “speaks to an old studio garret,” she said.

“There’s a comfortable feeling to its scale and size,” Soule said. “There’s a sense of coziness. Then you add on an elevator, and you can live here forever. You can wheel yourself in with a stroller and wheel yourself out in a wheelchair.” 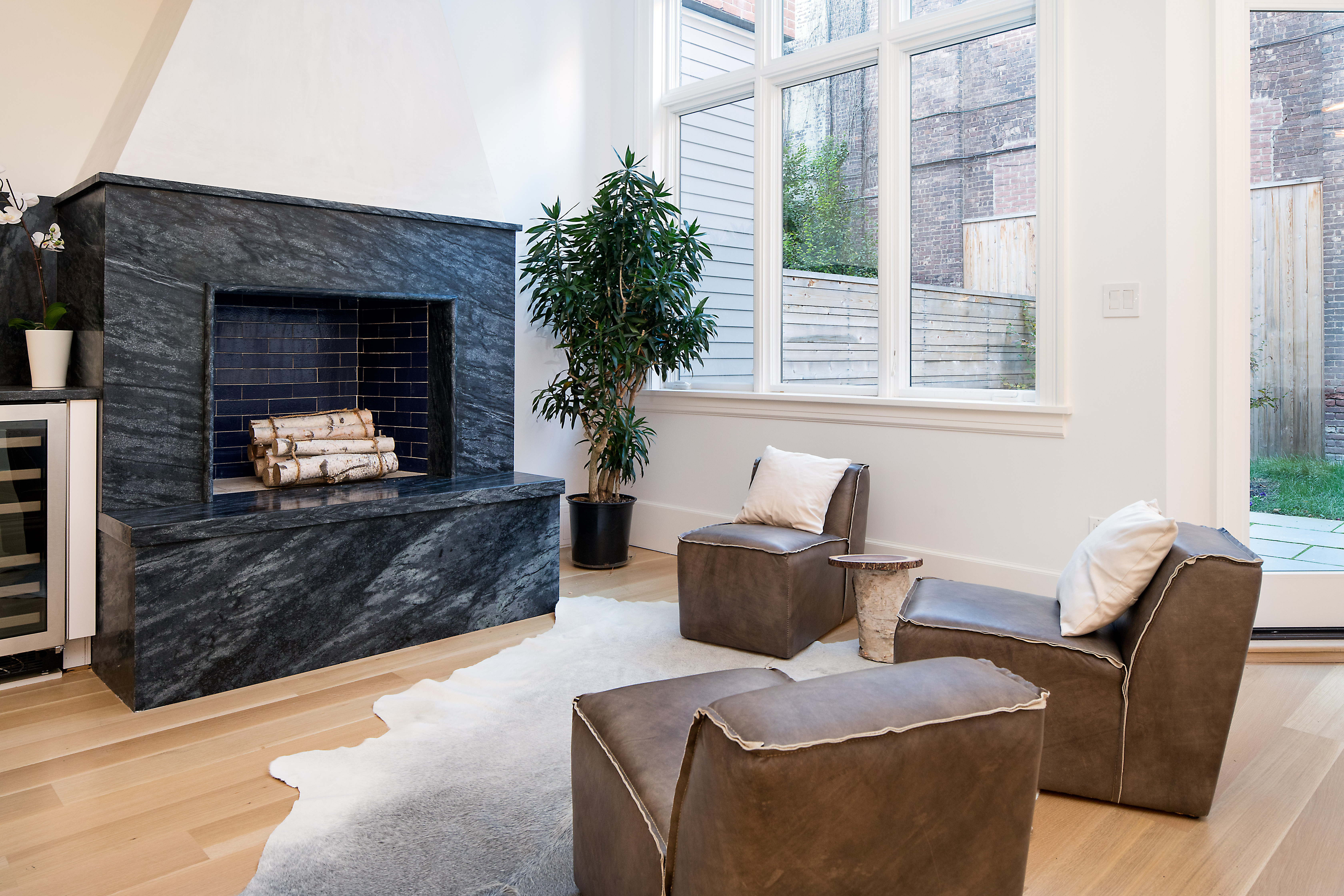 A view of the backyard. (Photo courtesy of Compass)

In the year since the house hit the market, the price has moved up and down. 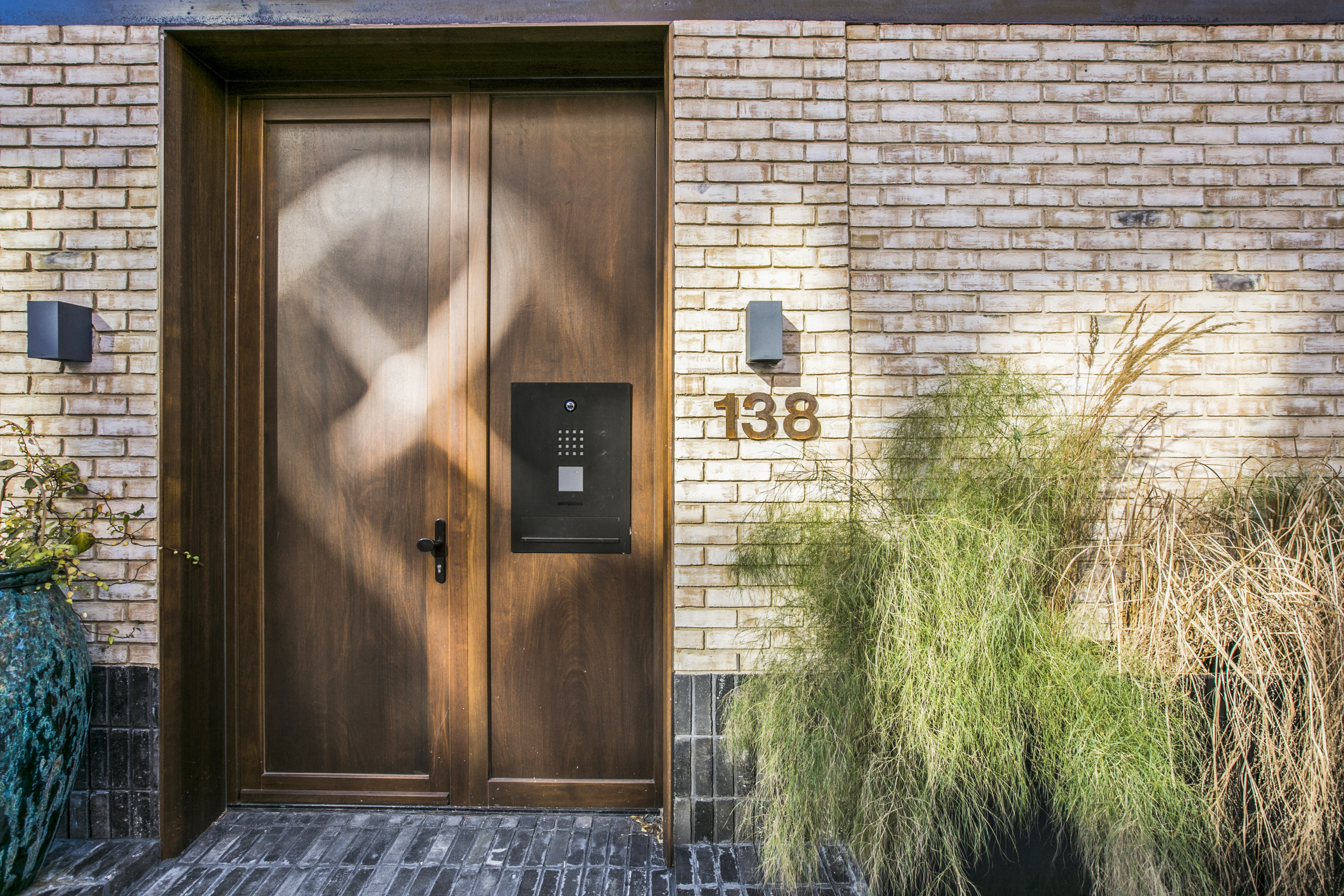 This townhouse has its own name: Domino House, a reference to the nearby defunct Domino Sugar Factory, whose structural beams were repurposed for the home’s herringbone-patterned floors.

“We’ve been told that the only other place that has these floors is the Whitney Museum,” said Corcoran’s Bruce Henderson.

The exterior bricks were handmade in Denmark, while the windows came from France.

The kitchen — on the garden level, with its 11-foot-tall ceilings — has custom walnut cabinetry made by Henrybuilt of Seattle. The company also made the doors and drawers (with brown leather handles) for the 15-foot-long walk-in closet in the master bedroom on the third floor. 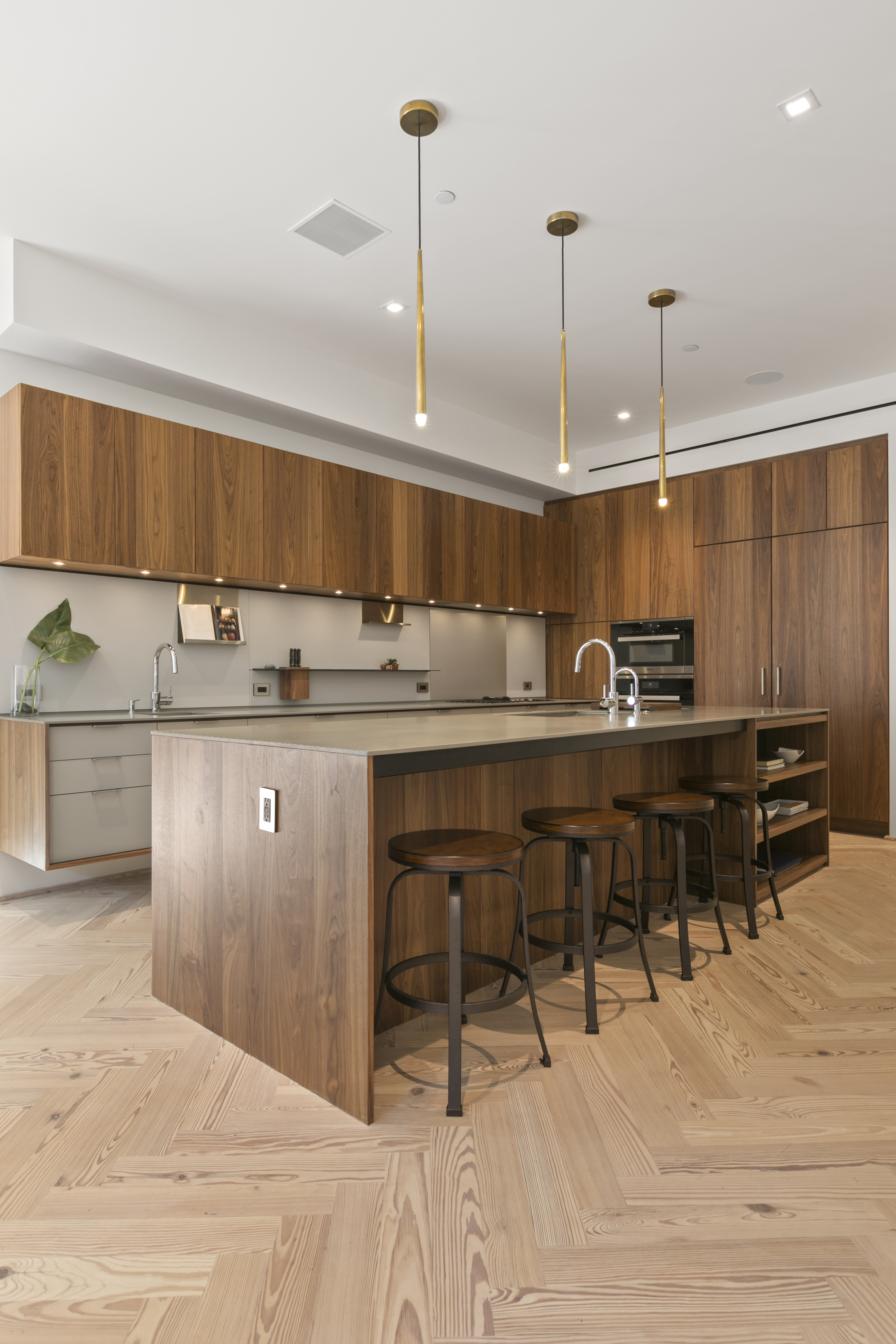 The kitchen. (Photo courtesy of the Corcoran Group)

“It’s sort of the best of things they could find,” Henderson said. “And it’s sort of an unassuming front. It looks like a couple of stories tall. It’s actually five. You can’t see the setback on the top or the lower level Zen garden.”

The house has more in common with its new counterparts in Brownstone Brooklyn than its Williamsburg neighbors, where newly built homes often embrace a more industrial loft-like look with cement floors. 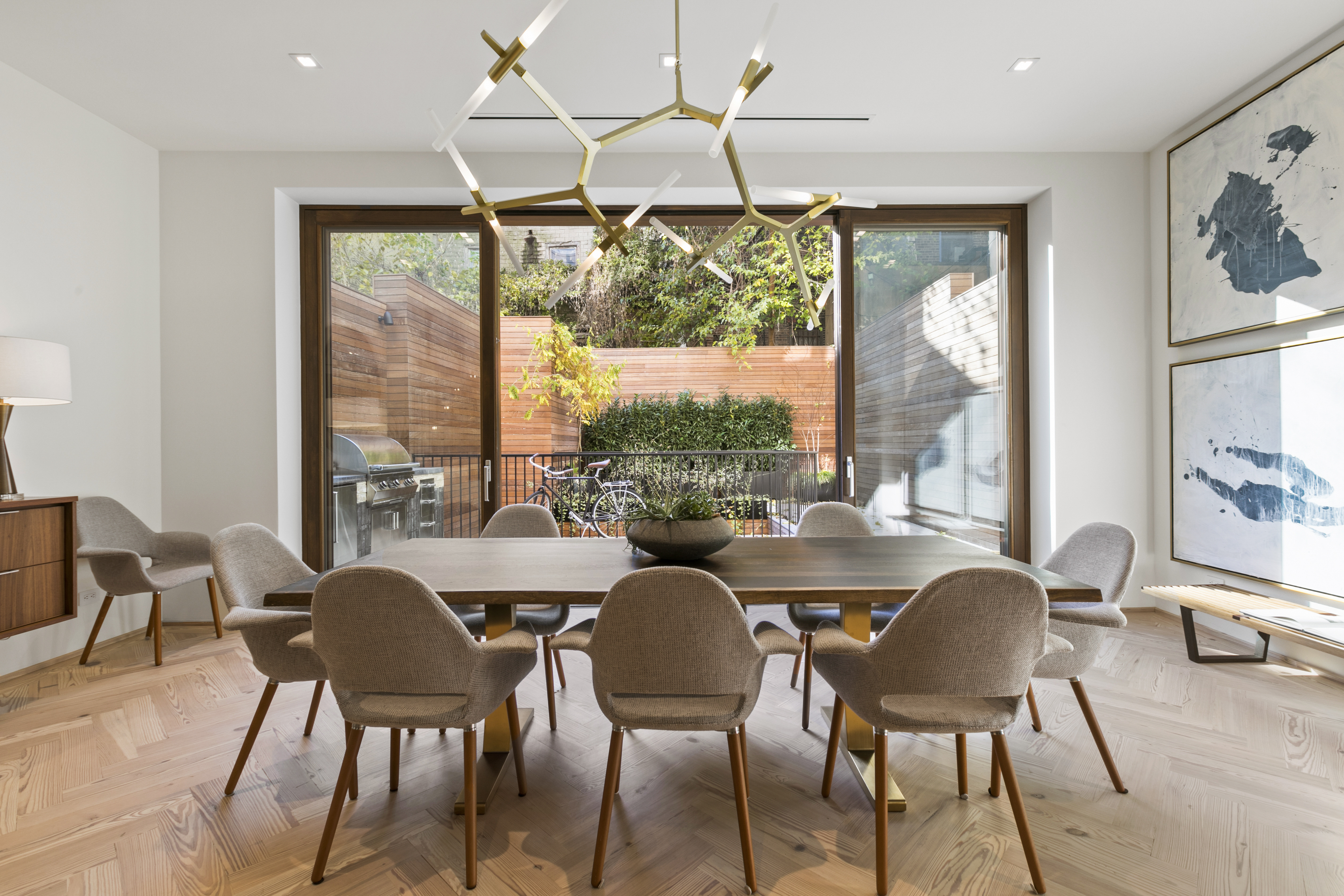 The dining area. (Photo courtesy of the Corcoran Group)

“This has more of a modern, but traditional feeling to it,” he said.

It includes futuristic touches, like a smart home system, with lighting, sound, a heating cooling, alarm and video entry that can all be controlled from your handheld device anywhere in the world. (You remotely can buzz a delivery into a vestibule entry while keeping the other door locked.) There’s also a special fresh air system that circulates filtered air into the home. 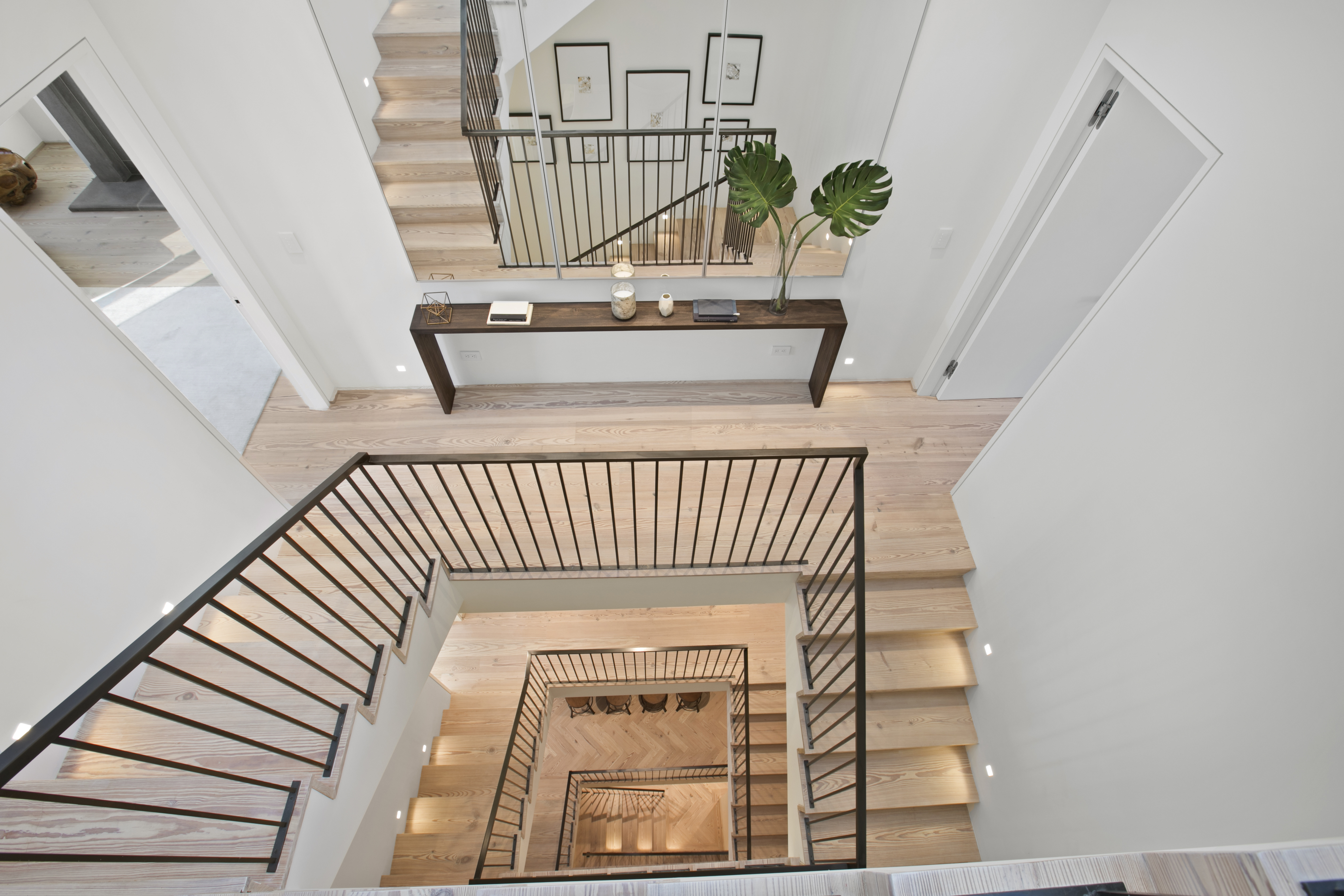 The space is zoned for live/work, and the skylit fourth floor, flanked by two decks, is ideal for a home office, gym or painter’s studio, the listing points out.

The home was originally listed a year ago at around $10 million, and has seen a couple of price drops since then. The seller is also throwing in five years' worth of parking at a garage around the corner, Henderson said.

Williamsburg’s townhouse market has transformed in recent years. The median for townhouses in the area was $800,000 in 2012, according to Miller. Now, it’s more than 110 percent higher, at $1.676 million.