By Katie Honan |&nbspApril 30, 2017 11:17pm | Updated on May 1, 2017 7:15am
@katie_honan
Twitter Facebook Email More
Mayor Bill de Blasio steering the "Urban Journey" ferry as it rides in Jamaica Bay on an early inaugural ride on April 30, 2017. The NYC Ferry service launches May 1 from Rockaway Park to Wall Street, with a stop at the Brooklyn Army Terminal.
View Full Caption
DNAinfo/Katie Honan

ROCKAWAY PARK — A "new era" in the city began with the first ride of the NYC Ferry, a transit option that Mayor Bill de Blasio says will open up opportunities throughout the city.

Dozens of travelers boarded the "Urban Journey" boat Monday at 5:30 a.m. at the Beach 108th Street dock for the first official ride.

Arverne resident Jim McHugh, 80, was the first on line to buy a ticket. He planned to take it round-trip.

"I think in the summer time it'll bring a lot of tourists," he said. "People don't want to get on the hot trains."

Other commuters said the ride was a more pleasant alternative to the A train, and some even went out of their way to ride it.

Michelle, who declined to give her last name, drove to Rockaway Park from Jamaica to take the ferry to her job in Lower Manhattan.

"I rode [the ferry] after Sandy and I liked the ride," she said. "It's comfortable, it's quiet, it's no stress — you just ride. You can rest and relax for 55 minutes."

The Rockaway route is the first new route in the city's NYC Ferry system, which will continue with an South Brooklyn route launching June 1, and then Astoria in August. 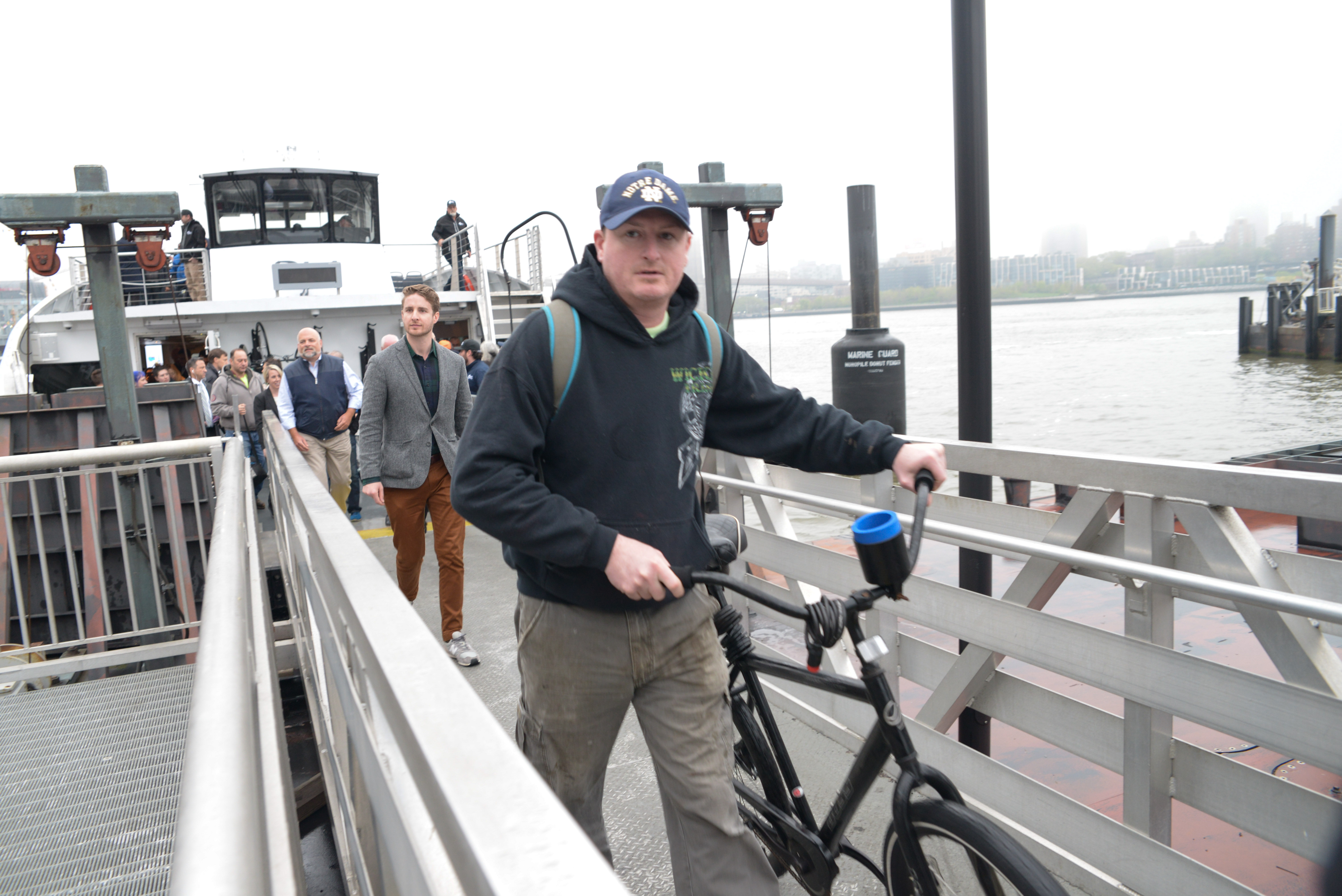 A rider from the first 5:30 a.m. ferry from Rockaway gets off at Wall Street with his beach cruiser. (DNAinfo/Katie Honan)

Free shuttle buses will run from Beach 169th Street and Beach 35th Street to take travelers to the dock on Beach 108th Street.

On Sunday, the mayor joined locals for an early ceremonial ride — saying he's proud the administration "kept its promise to the people of the Rockaways."

Activists on the peninsula pushed for the return of a ferry to Manhattan after the service offered after Hurricane Sandy ended in 2014. But low ridership, and a subsidy of more than $20 per rider, forced it to sail off into the sunset.

The mayor announced the route as part of his multi-borough ferry service in 2015.

The ferry — which costs $2.75 one way but does not offer a free transfer to the MTA's subway or buses — will create more connections to Rockaway and the rest of the city, he said.

"This community for too long didn't have the connection to the rest of the city it deserves," de Blasio said at the boat's "christening" Sunday.

The ferry was celebrated Sunday with a blessing by Imam Tahir Kukiqi of the Albanian Islamic Cultural Center on Staten Island, and a champagne christening by local ferry activist Laura Deckelman.

It then set off for Wall Street — with both de Blasio and Councilman Donovan Richards each taking a turn steering the boat. as riders enjoyed free drinks and snacks from the New Stand, who are operating all of the

The official Rockaway boats, which have not arrived yet, will include space for surfboards, and bikes are allowed on board for $1 extra. The East River boats are currently being used on the route between Rockaway, Brooklyn and Manhattan. 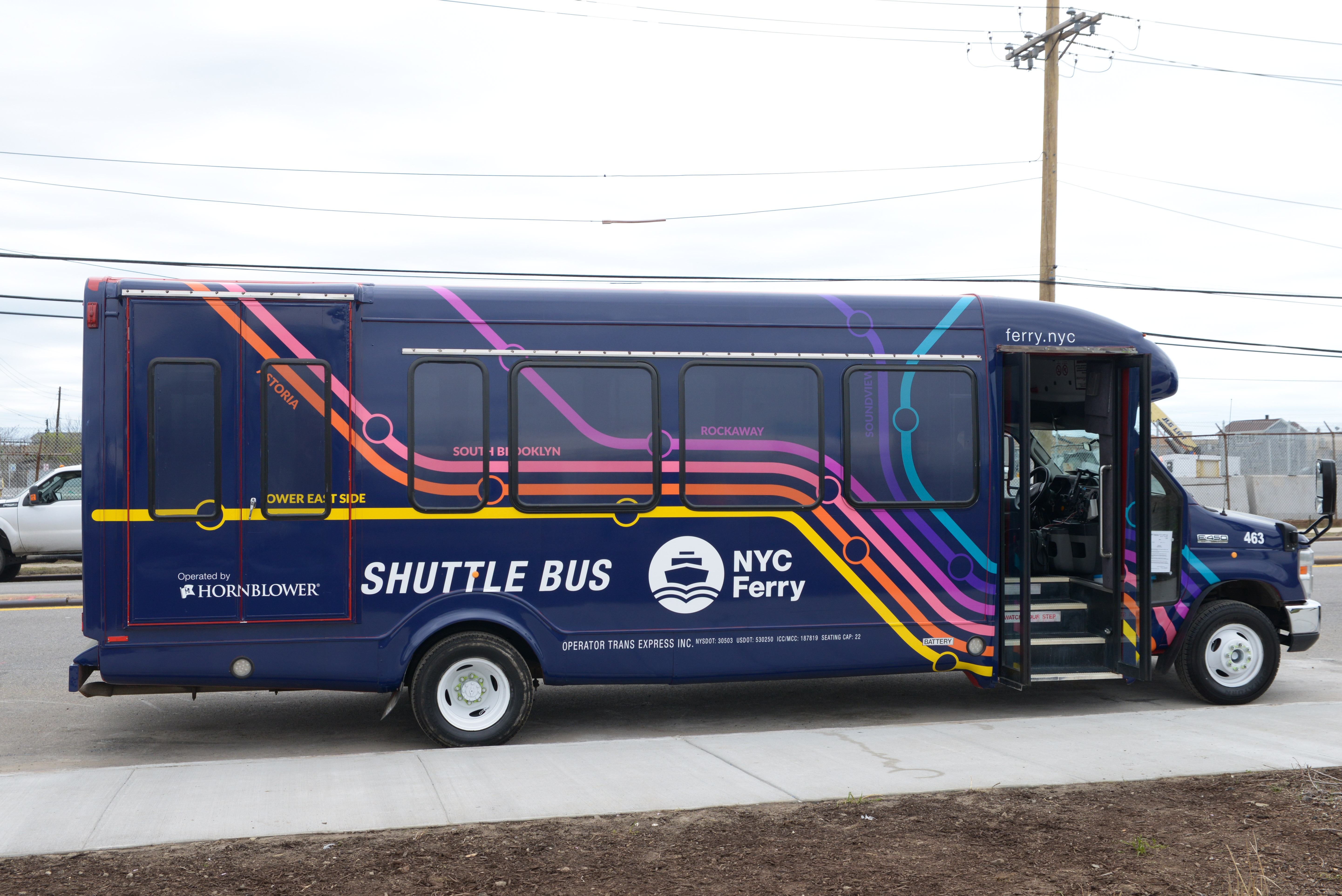 Also on Monday, the East Ferry route morphed into the NYC Ferry — with the cost to ride dropping from $4 to $2.75.