10 Trends for NYC's Office Buildings, Hotels and Retail in 2017

MANHATTAN —  The coming year promises to bring big changes when it comes to the city’s commercial real estate market.

Office space design is getting an overhaul, with a big focus on wellness.

The retail landscape is also transforming, as brick-and-mortar shops figure out how they can create “experiences” to lure consumers off-line and into their stores.

Expect shifts in the hotel sector, too, as the city cracks down on Airbnb while hotels embrace the more personal Airbnb style of hospitality.

Here’s what experts say should be on your radar for 2017: 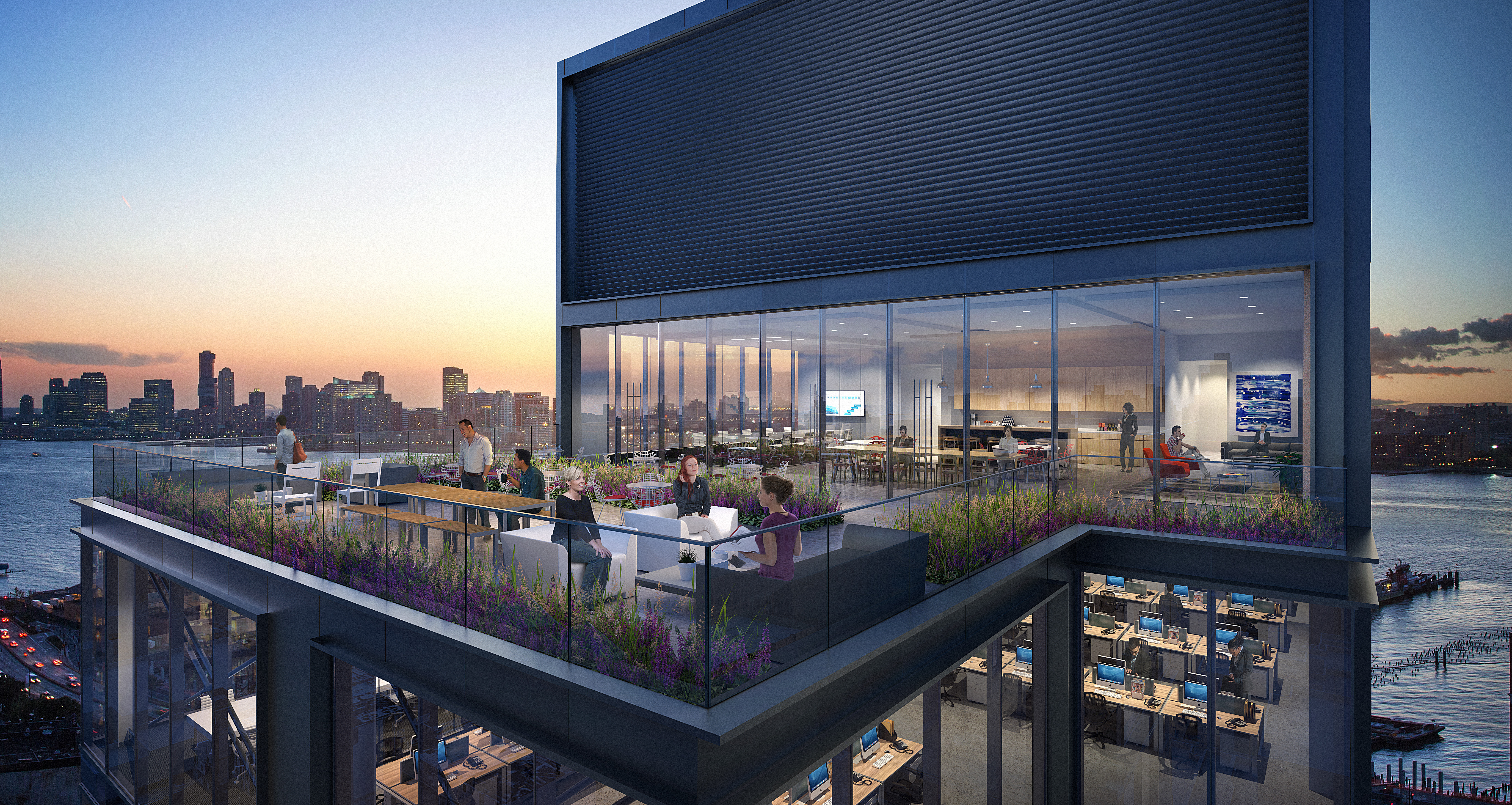 An office space at 412 W. 15th St. has a roof deck for workers. Rendering courtesy of CetraRuddy.

As an increasing number of employees work remotely, whether from home, an office or hotel, the boundaries between spaces and their functions are blurring, said Patricia Duval, senior interior designer at CetraRuddy.

“Travelers, for example, are mixing business with pleasure and working from places other than an office, and they're looking for authentic, engaging, and adaptable experiences wherever they are,” she said.

As a result, commercial design is changing.

“Hotels are incorporating elements of co-working spaces in an effort to help guests to stay and get their work done,” Duval said, “and offices are incorporating features drawn from the hospitality and residential world in order to encourage employee well-being.” 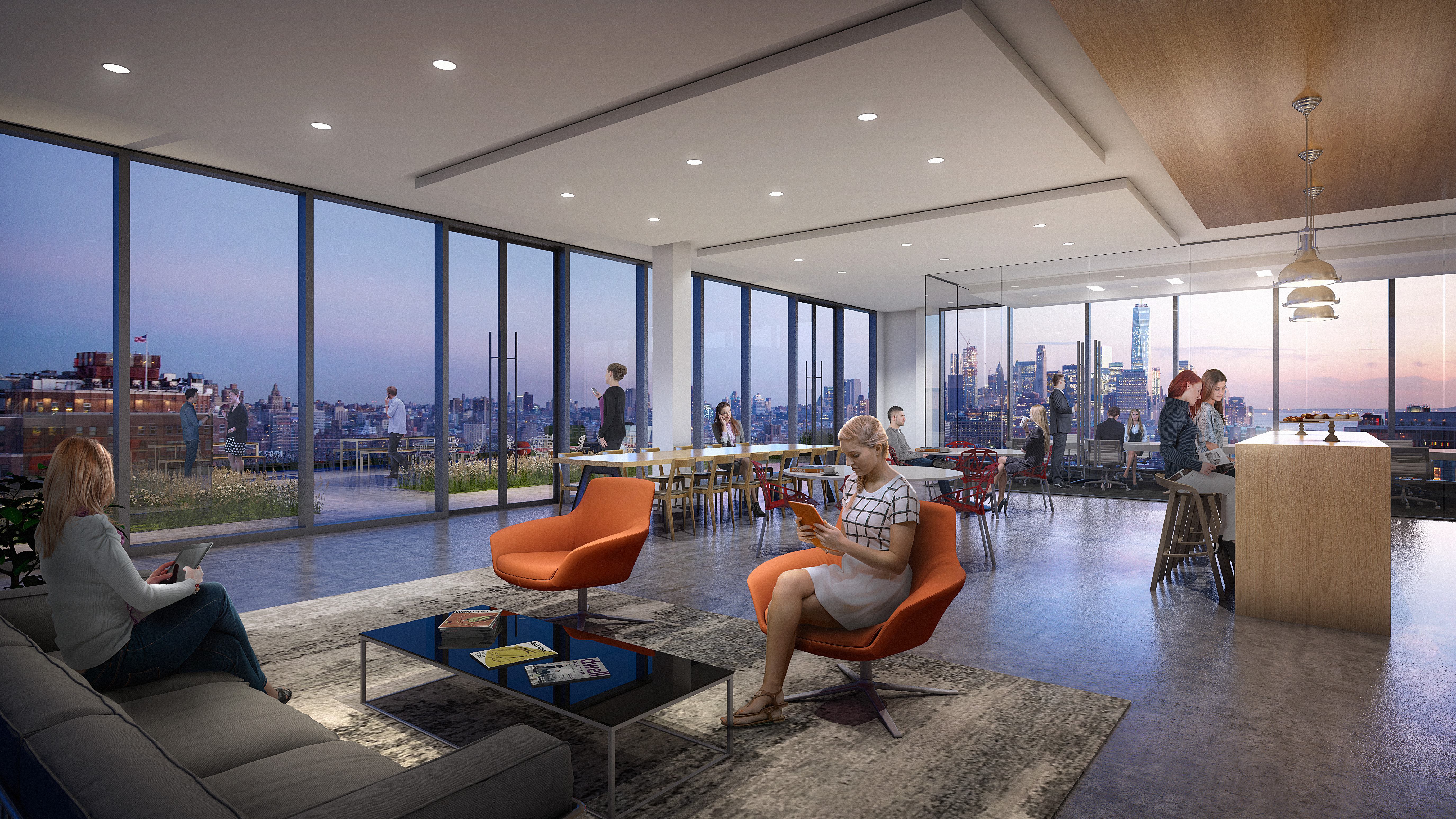 Co-working spaces are continuing to open, including WeWork's much-anticipated 220,000-square-foot space coming to the Brooklyn Navy Yard. WeWork is famous for introducing everything from social activities to kegs to the workplace.

And traditional companies are now looking at the co-working model for inspiration.

“It's all about creating meaningful work spaces,” Duval said, “places that feel good, make use of the latest technology, and are adaptable.”

Rather than viewing real estate decisions based on how they affect the company’s bottom line, there’s more focus on how the physical environment will impact a company’s “talent pool” of current and future employees, said Melissa Marsh, senior managing director of occupant experience at Savills Studley.

The contemporary office worker, she said, would rather have great shared space when working from the office than their own “dedicated” office space — for example, a desk or cubicle — if it's unpleasant.

“There is evidence that wellness is the baseline of human performance — and we will stop measuring human productivity and measure wellness factors,” Marsh said. “We are, as an industry, going to have guidance like never before.”

Set to launch this year is the less pricier Fitwel certification system. The New York-based nonprofit Center for Active Design will issue a scorecard to a building based on more than 60 benchmark criteria developed by the Centers for Disease Control, like proximity to public transit, access to lactation rooms and stairwell design. 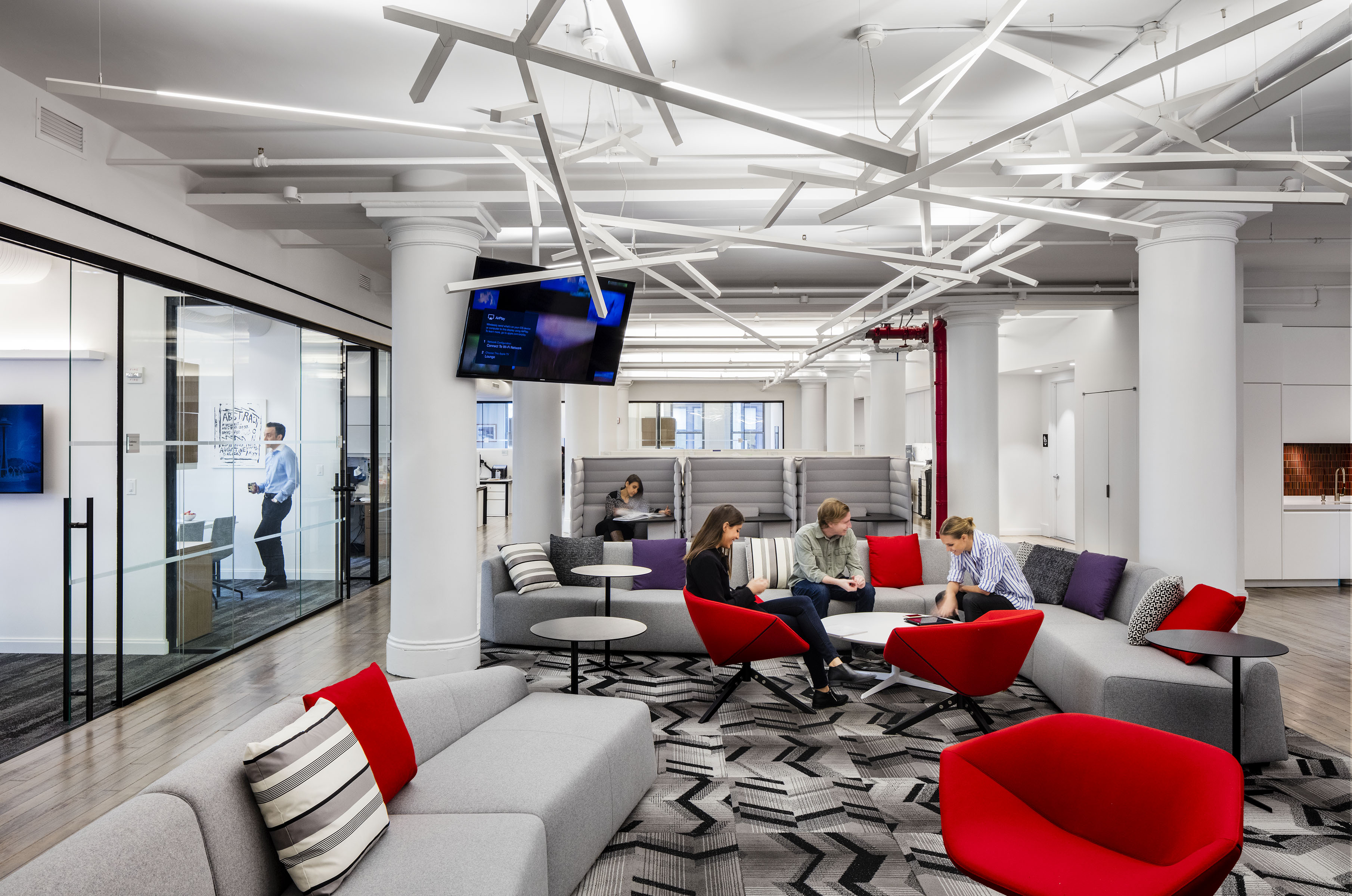 In this SoHo office for Corcoran, daylight is important as are flexible spaces for collaboration. Photo: CetraRuddy.

The redevelopment of Hudson Yards is bringing the “latest and greatest” when it comes to office space, said Larry Link, president of the real estate firm Level Group, noting that prices per square foot start at $90.

“People are willing to pay for that,” he said.

Many companies are relocating there, like the NHL moving from its Sixth Avenue headquarters.

Discussion will continue about the city’s proposed rezoning of Midtown East, a 78-block area around Grand Central Terminal where office developers could build greater density in exchange for contributing to transit and public improvement projects.

John Banks III, president of the Real Estate Board of New York — which represents the city's biggest developers — is optimistic that City Council will pass the plan, saying it’s “a critical step to ensuring Midtown remains one of the world’s pre-eminent business districts.”

Meanwhile, the opening of the Second Avenue subway is expected to have a big impact on retail spaces along First and Second avenues on the Upper East Side, predicted Zach Ehrlich, CEO of Mdrn. Residential, who said many retail spaces were given month-to-month leases in anticipation of the new subway line.

“Many traditional businesses whose leases are coming up will be faced with large rent increases,” he said. “We’ll see a huge wave of vacancies driven by removing these month-to month tenants.”

5. Retail will focus on creating “experiences.”

As online shopping increases, brick-and-mortar retailers are looking to give shoppers reasons to be out and about, many say.

In an interesting twist, online companies are now opening physical spaces, like the sleek Google pop-up on the corner of Spring and Mercer streets where customers could test drive its Google Home device — in a model kitchen in SoHo —  or try on a virtual reality headset for Daydream VR.

“Google doesn’t even sell anything there,” noted Mehul Patel, COO of Midwood Investment, the developer who owns Google's space at 96 Spring St.

And Amazon is likely opening a physical space in the city, he noted.

Patel predicted we’ll see more flagship experience stores, like Samsung’s at 837 Washington St. in Meatpacking District and nearby, the Starbucks Roastery — billed by the company as “coffee as theater,” giving customers an inside look as sourcing, roasting and brewing — coming in 2018.

6. Food halls are all the rage. 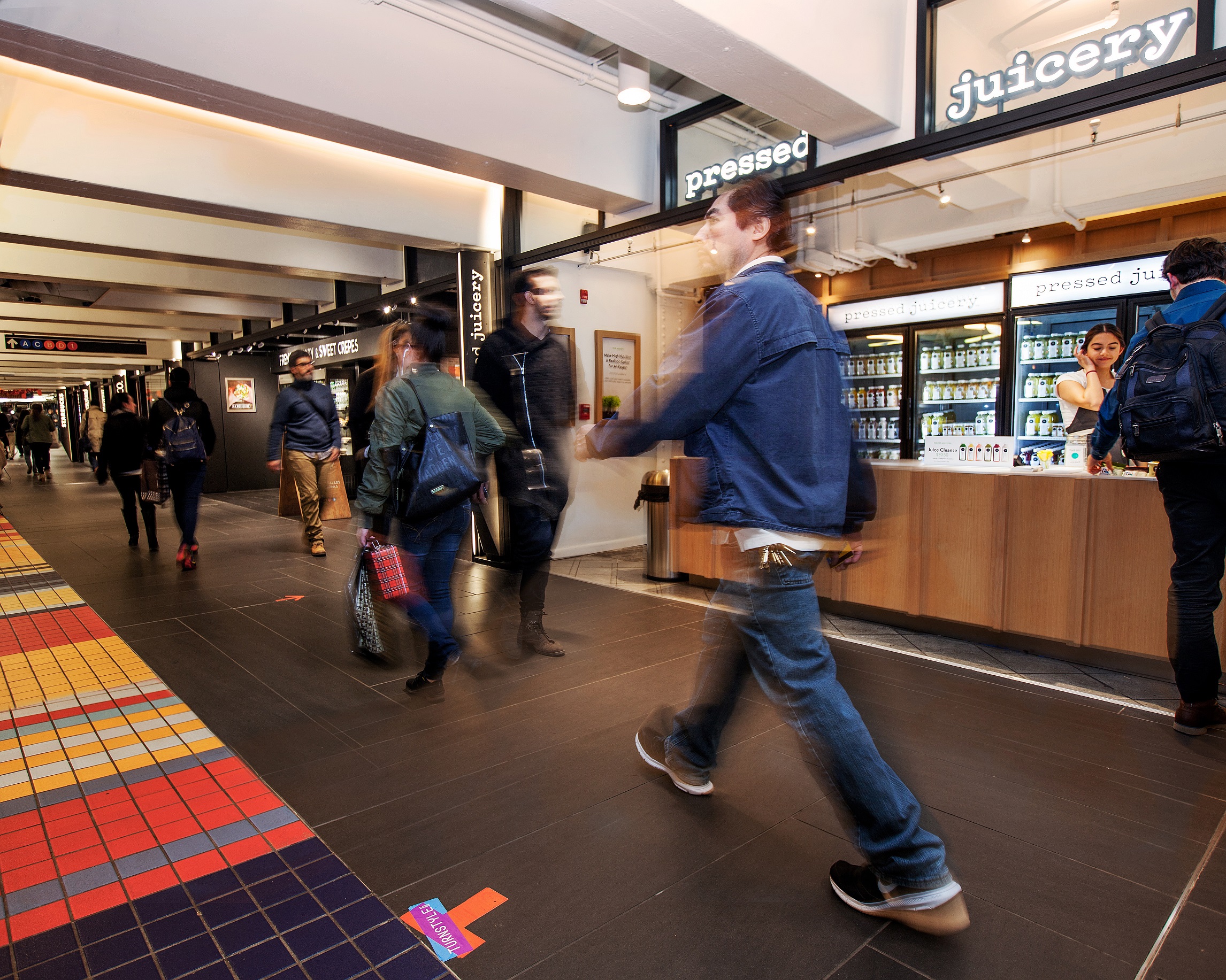 “The biggest driver of retail is probably food uses,” Patel said. “It goes back to the importance of experience.”

The TurnStyle market, for instance, gave new life to a 325-foot passageway beneath Columbus Circle, bringing vendors like Meltkraft and Dylan’s Candy Bar.

Now, you can grab an open face tartine sandwich from Jacques Torres at Vanderbilt Hall under Grand Central Terminal or a “broccoli classic” — broccoli, lycee  muchim, feta, shallots and mayo — at No. 7 Sub in the Plaza Food Hall under the Plaza Hotel.

Eataly now has a downtown space at 4 World Trade Center. The Berg’n food hall at a Crown Heights office building features many purveyors popularized by the Brooklyn Flea. Sugar Hill Capital Partners plans to open a 6,500-square-foot food hall in Washington Heights at 4300 Broadway at 183rd Street.  And, of course, all eyes on on famed chef Anthony Bourdain, as he works to bring his ambitious international food hall to Pier 57 along the Hudson River in 2019. 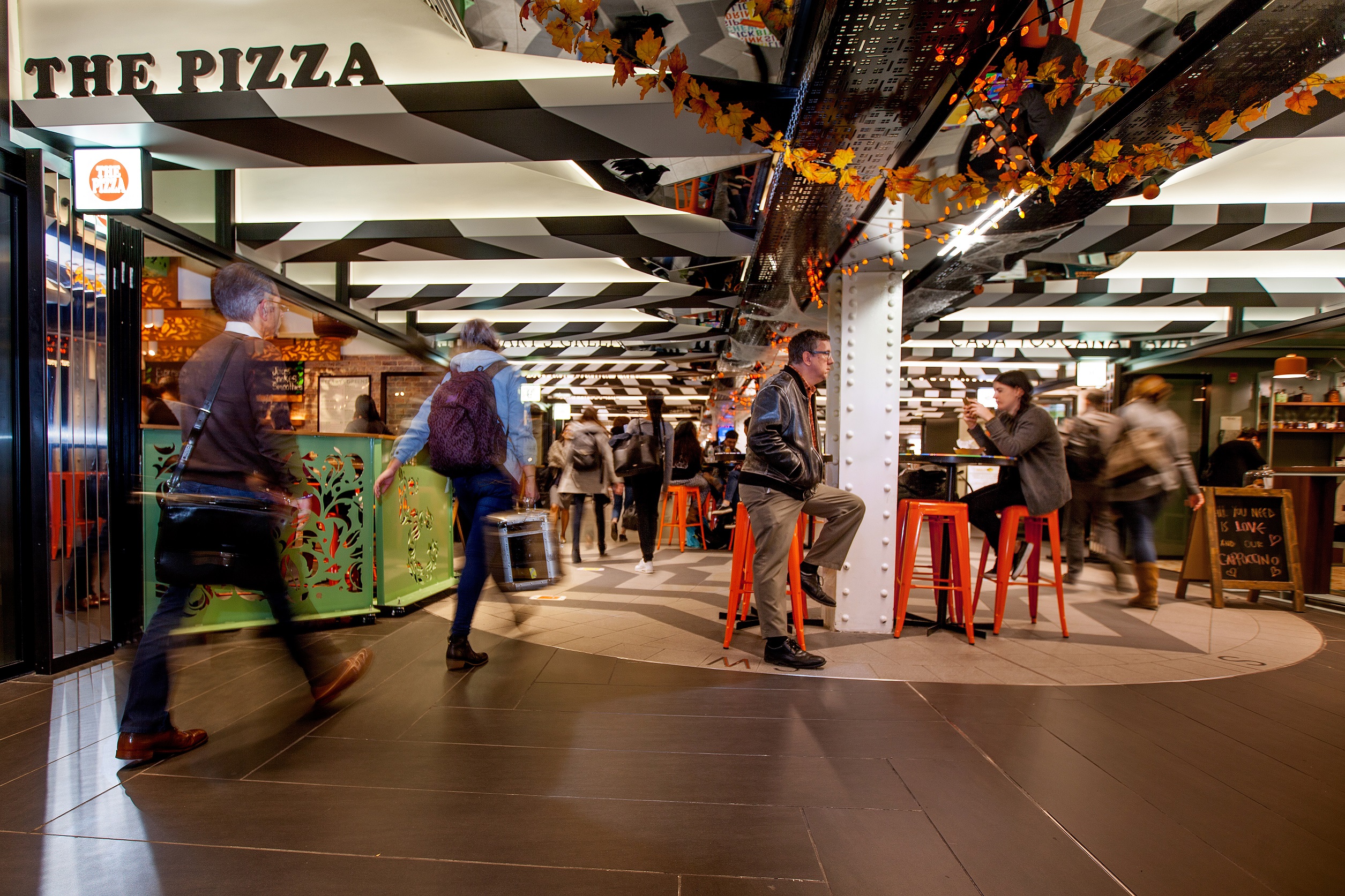 7. But retail space is hurting.

“I’m seeing more empty space throughout Manhattan than I’ve seen in my career,” he said. “At some point push is going to have to shove, and people will have to lower prices.”

That said, businesses are finding new uses for retail spaces, said Link, who expects to see an uptick in Virtual Reality stores and other non-traditional retail uses, like Maple, a delivery-only restaurant that has about seven locations for kitchens in Manhattan and plans to expand even though it only sells its chef-designed meals online.

8. Hotels continue to pop up in industrial areas

As the city continues to develop new models for mixed-use industrial and commercial spaces, hotels continue to open in the city's manufacturing areas — which ban residential use under current zoning rules.

But because of the volume, hotels are more profitable than industrial manufacturing or other office space, which can often drive up rents for non-hotel industries until they can’t afford the overhead and have to move out.

Advocates are hoping the city makes it harder for hotels to open in these areas but the hotel industry is pushing back, experts say.

“The hotel is kind of a loophole in the law” that bans residential use in industrial areas, since hotels are, by nature, short term-stays, Link said.

Hotels can also be more profitable and more appealing to landlords than residential buildings, experts warn.

New hotels have opened in the Garment District and along the waterfront in Williamsburg, like the splashy William Vale. Greenpoint has also gotten a trio of new hotels, including the Box House Hotel, the Henry Normal Hotel and the Franklin Guesthouse on the quietly hip stretch of Franklin Street.

“That was a multi-family building,” Link said of the Franklin, “but they saw a better opportunity as a hotel.”

9. The state is cracking down on Airbnb.

The growth in hotels in industrial areas comes as the state pushes back against advertising illegal short-term rentals on platforms like Airbnb.

Renting out an apartment for less than 30 days is illegal if a tenant isn’t there, among other reasons. The new law is supposed to apply to anyone advertising an entire apartment as a short-term rental in a building with three or more units.

There’s a debate, however, whether enforcement should focus mainly on the “bad actors” — the commercial operators, who essentially use the Airbnb to sublet their living spaces and run illegal hotels — or whether the small-scale users should be targeted as well.

REBNY hopes the year will bring heightened scrutiny to all, as its landlords often complain about concerns of safety and quality of life in their buildings when there’s a stream of transient users.

“The de Blasio administration will crack down on illegal hotels with the help of a new law that will ensure that any violator—owner, tenant, or commercial operator—is held accountable,” Banks predicted.

10. But Airbnb is forcing hotels to rethink design.

“Each property or hotel now aims to tell a different story, one that's tied to the location and the experience that hoteliers want to convey to their clients,” she said. “Chains want to offer the look and feel of independent hotels, with the support and standards of an established brand.”

Craftsmanship, she said, has become more important for hotels, along with a greater emphasis on using local materials.

“Spaces feel increasingly personal as design is employed to create unique, original experiences and memorable moments guests won't be able to find elsewhere,” she noted. “The incorporation of art is increasing, for example, not just as a decorative element but as an expressive language for the architects and designers and as a way to set each project apart.”