TIMELINE: City's Build It Back Program Riddled With Missteps and Delays

NEW YORK CITY — Long before Mayor Bill de Blasio admitted that the city's Build It Back program to help homeowners rebuild, renovate or elevate their homes after Hurricane Sandy would not meet his December 2016 deadline — the program was a thicket of poor choices, bureaucracy and overly ambitious goals.

Billions in federal funds were poured into the project since the time it launched under then-Mayor Michael Bloomberg in 2013, as the city set out to help all of its more than 21,000 applicants get reimbursed for construction, new homes, or elevations.

Yet from the start it faced major challenges. Homeowners complained about lost paperwork, years-long delays in beginning work and shoddy workmanship.

Last week, Mayor de Blasio finally admitted that his goal to complete all homes by the end of 2016 would pass without being met.

"We will fall short of that goal, for which my team and I take personal responsibility," Mayor Bill de Blasio wrote in the city's annual update.

Here's a timeline of the Build It Back program, which currently doesn't have a deadline for completion:

► June - Mayor Michael Bloomberg announces the Build It Back program, an extension of his Rapid Repairs program which was launched in the weeks after Hurricane Sandy hit in October 2012.

While Rapid Repairs was focused on repairing and fixing utilities so homeowners could get back into their homes, Build It Back was seen as the "next step in our Administration’s comprehensive approach to recovery,” then-Deputy Mayor Cas Halloway said at the time. Its initial budget was $648 million in federal funds, and homeowners with the most financial need were given priority. 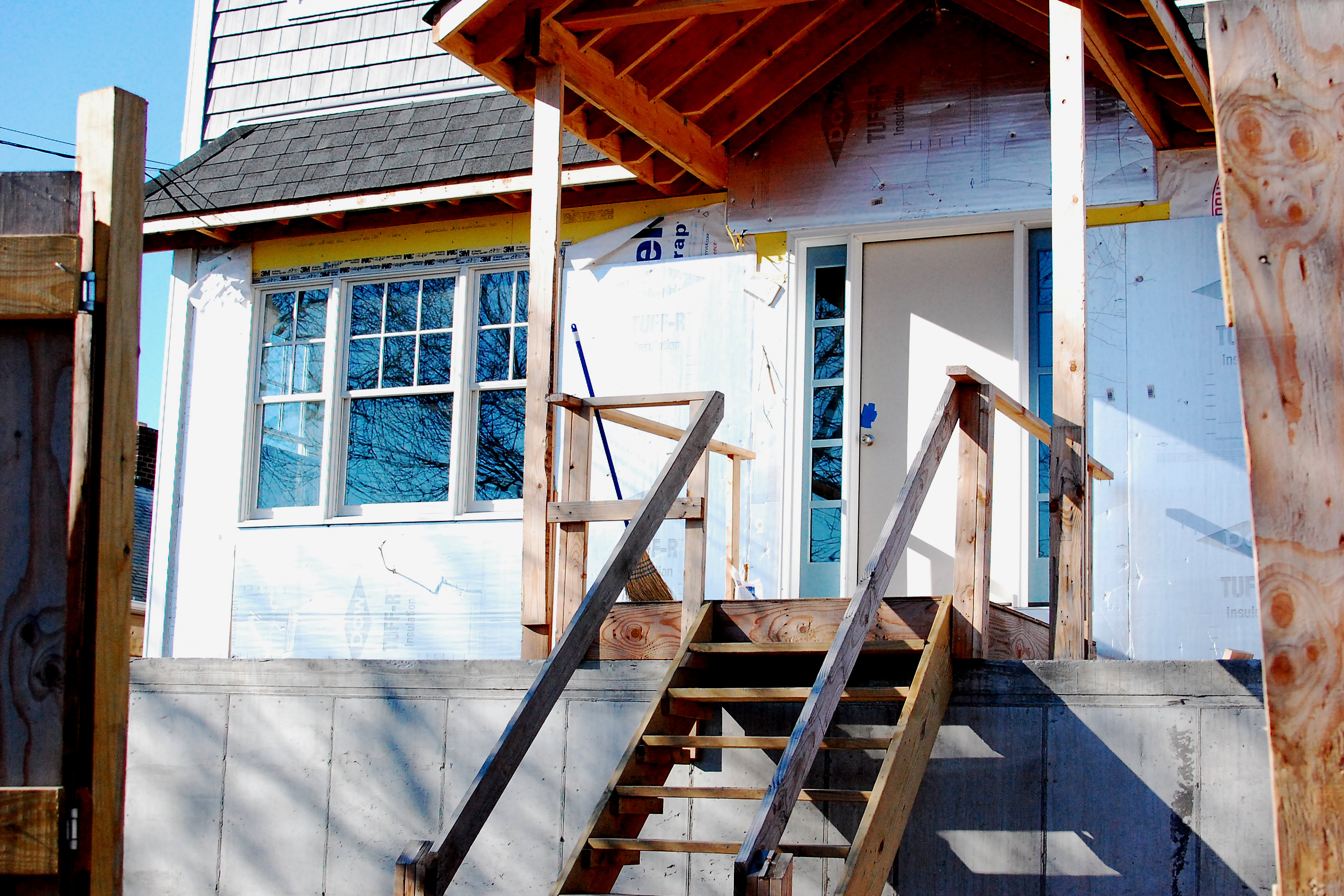 A home in Neponsit that was waiting on reimbursement from the city's Build It Back program in 2014. (DNAinfo/Katie Honan)

► Jan. 1 — Mayor Bill de Blasio is sworn in as mayor of New York City. In his State of the City speech a month later, he says the city "will not forget our obligations to the people of this city still recovering from the aftereffects of Superstorm Sandy."

“We are resolved to make the efforts underway function more effectively and efficiently," he said. 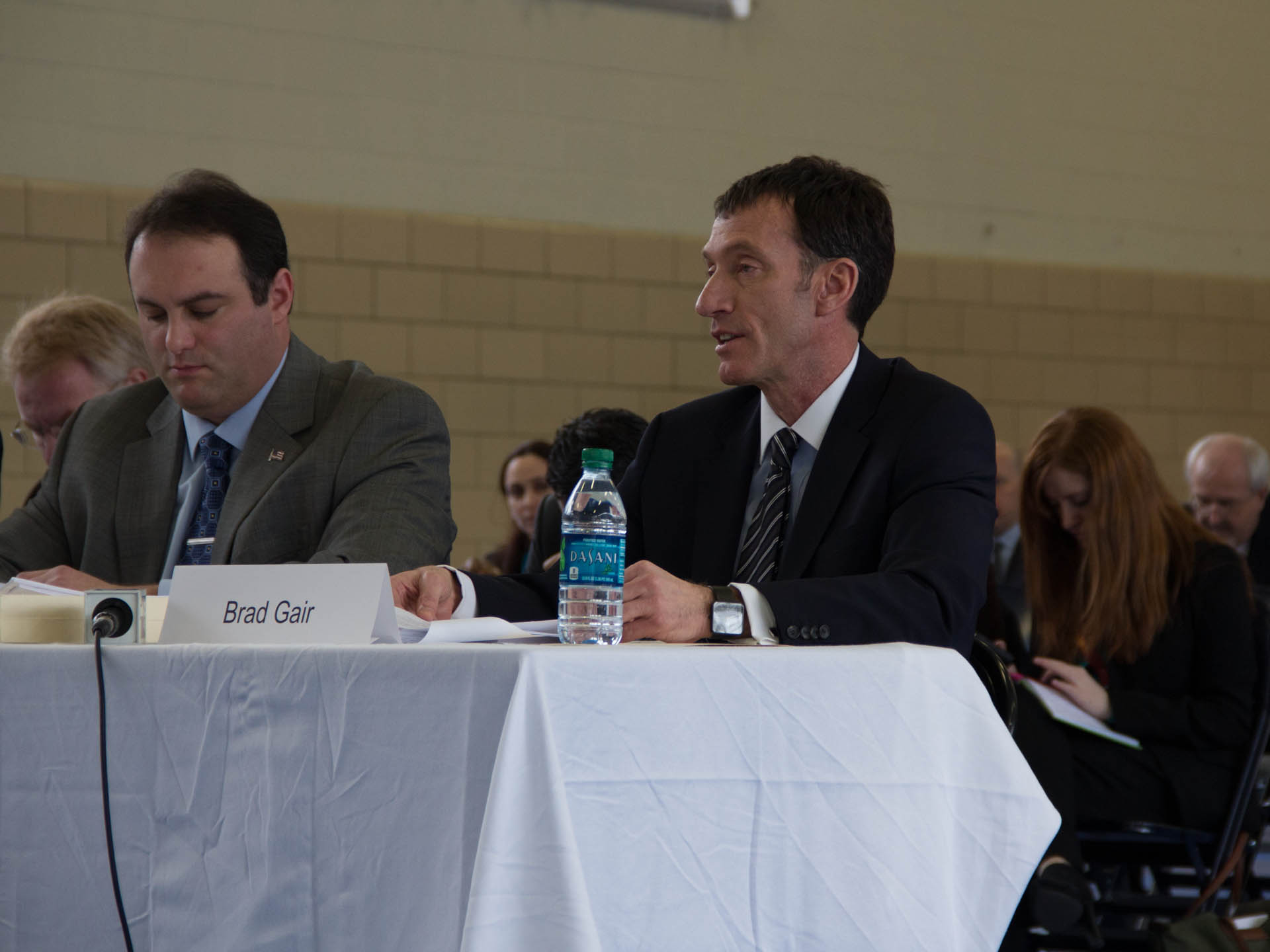 Brad Gair at a hearing on Staten Island. (DNAinfo/Nicholas Rizzi)

► Feb. 1 - Brad Gair, the director of the Housing Recovery Operations and founder of Build It Back, leaves City Hall for a job at NYU Langone.

► Feb. 19 - Kathryn Mallon, the head of the Build It Back program selected under Bloomberg, leaves weeks after Gair.

► Feb. 24 - More than a year after the storm, and months after Build It Back's launch, not a single home had been rebuilt with the federal dollars.

At this point, applicants were listed under varying "priority" numbers based on need and income — which further complicated the program, registrants said.

► March- Three reimbursement checks are mailed out through Build It Back, the first sign of progress for the program.

► March 26 - Mayor de Blasio appoints Amy Peterson to run the Build It Back program. She previously worked under mayors Rudy Giuliani and Bloomberg in the Department of Design and Construction and most recently ran the advocacy group Nontraditional Employment for Women. 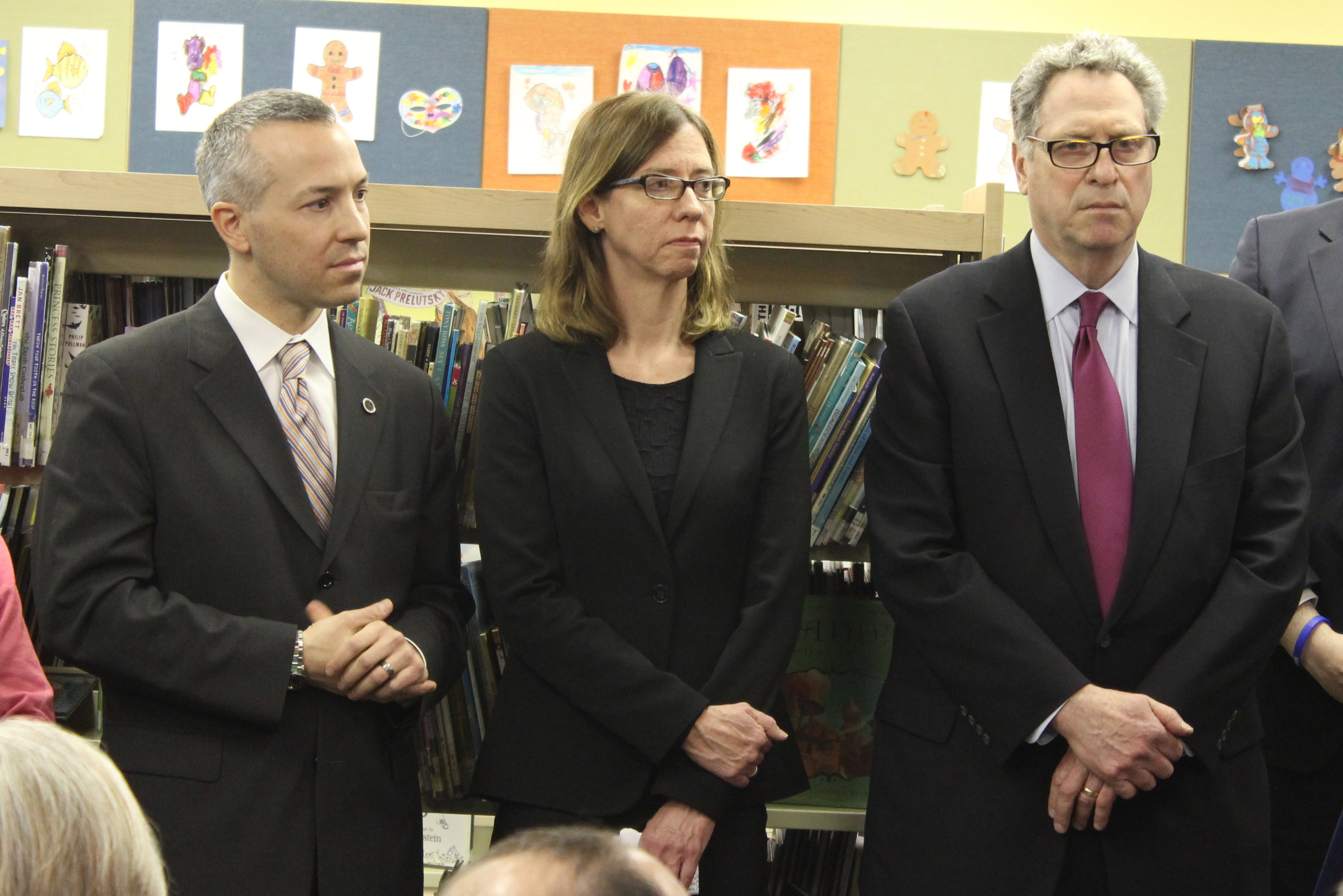 Zarrilli, Peterson and Goldstein at their announcement at the Seaside Library in Rockaway Park. (DNAinfo/Katie Honan)

► March 30 - The mayor officially announces his leadership team for his recovery programs, which includes Peterson, Daniel Zarrilli as head of the Office of Recovery and Resiliency and Bill Goldstein as a new senior advisor for recovery, resiliency and infrastructure.

► April - De Blasio promises to send out 500 reimbursement checks by the end of the summer.

“We’ve laid out a blueprint to provide critical financial relief to homeowners and directly engage communities in the rebuilding process — all while continuing our work to ensure a stronger and more resilient New York,” he said at the time.

► Sept. 3 — Build It Back surpasses the mayor's goal to distribute 500 reimbursement checks and begin 500 construction projects by Labor Day. Officials credited an increase in the program's staff, with additional borough directors and Department of Buildings inspectors working specifically with Build It Back. 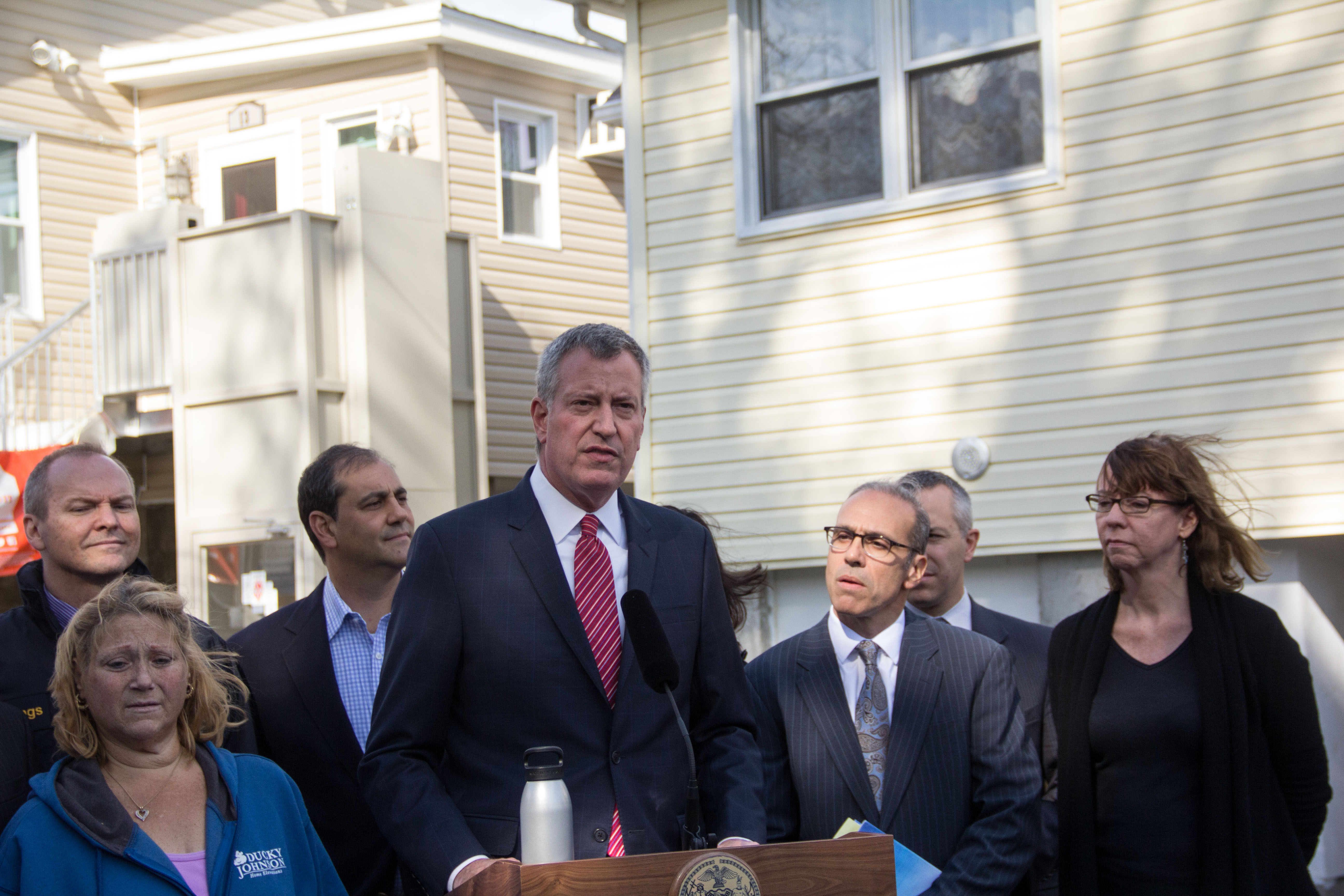 Mayor Bill de Blasio vowed to complete the Build It Back program by the end of 2016 at an anniversary event on Staten Island on Oct. 29, 2015. (DNAinfo/Nicholas Rizzi)

► March - An audit from Comptroller Scott Stringer finds the city paid $6.8 million for "flawed or incomplete" work in its Build It Back program.

► Oct. 29 - On the third anniversary of the storm, de Blasio makes an ambitious promise: to complete every construction project by the end of 2016.

"We will not be satisfied until everyone who was displaced is back in their home," he said. "We made, finally, some real progress."

► May - Multiple homeowners say they were prematurely pushed out of their homes months before any construction began. Residents accused the mayor of rushing them out of their homes to make it seem like Build It Back was nearing the mayor's goal, they said. 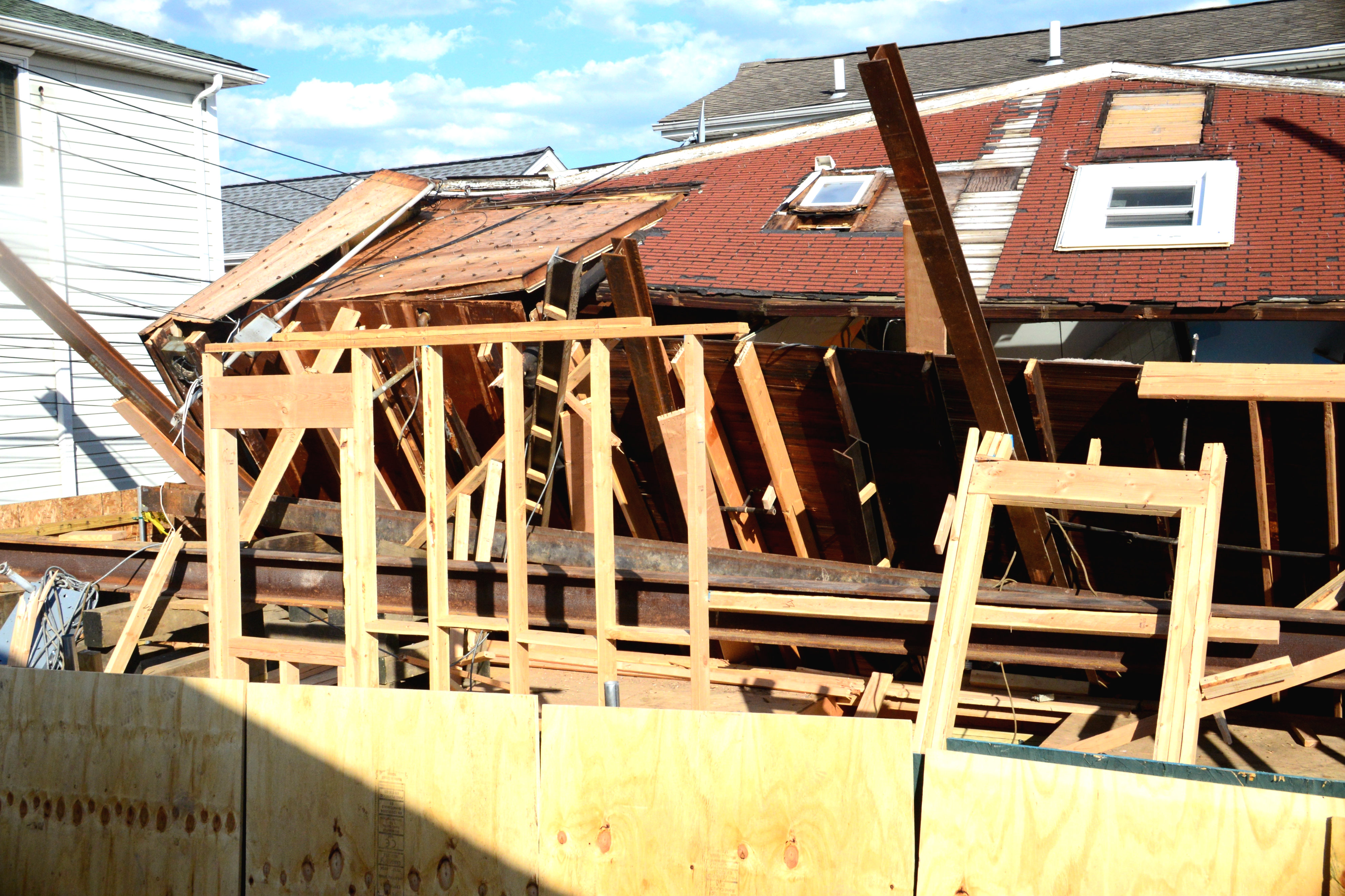 ► June 22 - A home in Gerritsen Beach collapses after it was elevated onto stilts.

► July - Councilman Eric Ulrich, who represents a district with the most Build It Back applicants, says Peterson should "quit or be fired" amid ongoing issues with Build It Back.

► July 12 - Gair, the creator of the Build It Back program, calls the initiative a "categorical failure," saying it didn't meet its goal of getting people back into their homes quickly.

► Sept. 12 - As multiple homeowners complain of delays in construction starting, one homeowner in Gerritsen Beach actually dies waiting to return back home.

“He’d go back to visit and tell me, ‘really, nothing’s going on, every time',” his brother said.

► Sept. 21 - The city, unsure of why so many people dropped out of Build It Back, says it's working with CUNY to conduct an attrition study.

► Sept. 23 - Build It Back program officials say they now need $500 million more in federal funds to fulfill their mandate, despite helping less than half of the original applicants.

► Sept. 30 - Luis Mendes, who worked with Peterson at the DDC and most recently at the 9/11 Memorial Museum, joins Build It Back to help push the program along.

► Oct. 20 - The city finally admits it won't make its 2016 goal, with the mayor apologizing for the "tangle of bureaucracy" that has slowed down progress.

Officials anticipate 75 percent of homes will be complete by the end of 2016, with starts on 90 percent of them. Build It Back now has "war rooms" with multiple city agencies at work to cut through some of the red tape, and hope the hiring of Mendes will further many projects, officials said.