Developers know that many renters need roommates to afford New York City living, and — with a glut of rentals hitting Manhattan’s market and pushing prices down — they understand that squeezing roommates in is one of the best ways to keep prices up and vacancy rates down.

That means more landlords are letting renters know, whether explicitly or tacitly, that they can indeed carve out extra bedrooms with temporary walls.

At the Grayson, a 17-story rental on East 28th Street, a unit is listed on Streeteasy for $5,500 a month as a three-bedroom though its floor plan shows it as a two-bedroom. The description states, “This apt easily converts to a 3 bedroom. Full walls allowed.”

A $4,100 a month one-bedroom in the same building, states, “This apt easily converts to a 2 bedroom.”

In recent years, brokers said many landlords had grown skittish about temporary walls. They were worried after a prosecutor hit owners of a Bronx building with manslaughter charges after two firefighters were killed in 2005 while fighting a fire in a building with illegally built temporary walls, according to a 2010 New York Times article.

Landlords also became concerned after the city’s crackdown on illegally installed temporary walls in the mammoth Stuyvesant Town complex on the East Side, the article said.

Temporary walls are not necessarily illegal, but all work related must be proposed by a licensed architect or engineer and be reviewed by the Department of Buildings, according to city officials, because the addition of a partition, pressurized wall, or other floor-to-ceiling divider results in a change to the layout an apartment and therefore require permits from the DOB.

After the work is complete, the architect or engineer, who prepared the plans for the permit, must then inspect the work and then sign off at the DOB, officials said.

But despite these steps and concerns about landlord culpability the walls are going up again, along with an uptick in companies marketing their sprawling units as convertible or with flexible layouts, brokers said.

“We’re seeing walls and dividers in a lot of new development. There are a lot of buildings showing them in their marketing materials," said Karla Saladino, of Mirador, the exclusive rental agent for more than 100 buildings across the city.

“A lot of the stuff in Murray Hill has to be convertible or people can’t afford to be there,” she added. “There are only so many people who want to live in one-bedrooms in the neighborhood.”

Murray Hill, in particular, is a hot spot for temporary walls as it’s a haven for young professionals looking to split costs to afford full-service buildings, and because so many more of these buildings are being added to the area, like the American Copper Buildings on First Avenue (with about 800 rentals) and the nearby 685 First Ave. (with about 400 rentals). 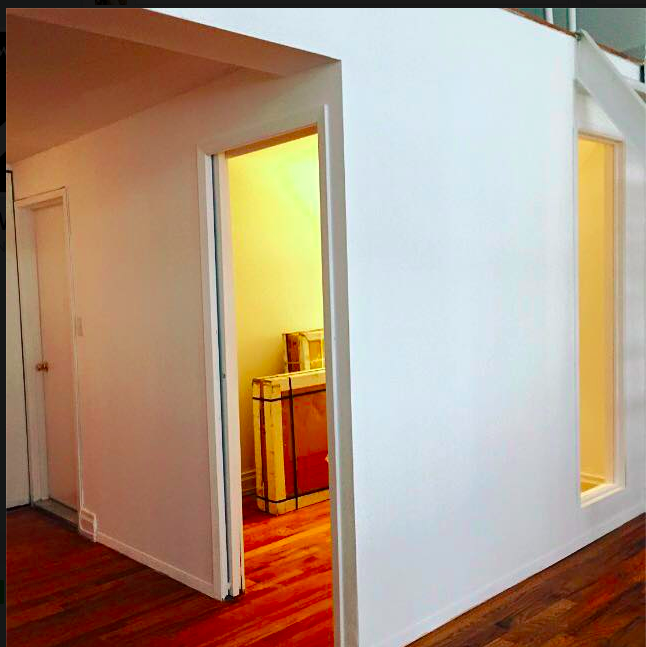 Temporary walls in an apartment. (Photo courtesy of All Week Walls)

“It’s a game changer for tenants," said Kobi Lahav, managing director at Mdrn. Residential. "They can move into a luxury building and have a pool and doorman and feel like they’re rolling in it. The management company can get their rents. It works for everyone, except maybe the Buildings Department."

At Stuy Town, once the hotspot for illicit wall activity, temporary walls have in many cases become sanctioned — and now cost a premium.

One-bedroom units, ranging from 707 and 790 square feet, cost from $3,138 to $3,559 a month, according to the complex's website. Meanwhile, the same sized units, listed as a “one-bedroom flex” where an extra wall is already installed — with windows in it to bring light to the newly sectioned-off living room — are marketed as costing $3,421 to $3,942 a month.

The flex apartments likely helped the complex’s bottom line, according to a Real Deal analysis from November, which found about a third of its market-rate units were marketed as the pricier flex apartments.

Representatives from Stuy Town and the Grayson declined to comment on the convertible layouts.

Donny Zanger, founder of All Week Walls, said his business installing temporary walls dipped after the 2010 Times article about illegal walls, but recently things have been on the upswing again.

Developers need the walls since they “put a lot of money into their buildings” and have to command high enough rents and low enough vacancies to see returns on their investment, Zanger said.

There’s some trepidation in the developer community as rents dip.

Prices dropped last month 1.3 percent from the year before, according to a report from Douglas Elliman.

Still, for a one-bedroom in Manhattan, the median rent — representing the midpoint of the market — was $3,396 a month, the report found.

Since landlords typically require a renter earn 40 times the monthly rent, that means renters for half of the one-bedrooms on the market would need to earn more than $135,800 a year.

“You can have someone working at Morgan Stanley, and if their rent increases 10 percent and wages increase 2 percent,” Zanger said, “the only way you can balance it out is by the walls.”

Severe crowding — units with more than 1.5 persons per room — however, increased substantially, by nearly 45 percent from 2005 to 2013 and is especially a problem for low-income immigrant families, where temporary partitions are less likely to be up to code, according to a recent report from City Comptroller Scott Stringer.

The proportion of studio apartments with three or more occupants rose by more than 365 percent during that time, Stringer found, and more than 3 percent of all units in the city were classified as severely crowded in 2013.