How the Burden of Testing Hits English Language Learners Hard

BRONX — When Fatima Ndiaye moved to The Bronx from Senegal nearly two years ago, it was stressful enough for her to cope with adjusting to her new home while barely able to speak English.

But her stress only increased when she found herself in an educational system where taking tests — especially to assess her English language skills — was the norm.

“The testing is a lot,” said Ndiaye, who started ninth grade this year.

She recalled spending several hours over the course of nearly an entire week of school taking a single exam — the New York State English as a Second Language Achievement Test [NYSESLAT]. The controversial intensive multi-part exam, given to all English Language Learners in grades K – 12 every year to assess their proficiency, is mandated by the federal government to assess mandated student services.

Ndiaye is not alone.

English Language Learners (ELLs) make up roughly 14 percent of the city’s 1.1 million students and are among the ones struggling the most. They also spend vastly more of their time taking and prepping for standardized tests than native speaking students, DNAinfo New York has learned.

In some cases, an ELL student might spend more than 34 hours on standardized exams and practice tests in a given year compared with approximately 28 hours for English speaking students in similar schools and just 10 hours for native speakers at some city's schools where staffers reject an emphasis on testing and prep, according to teachers, parents and students. 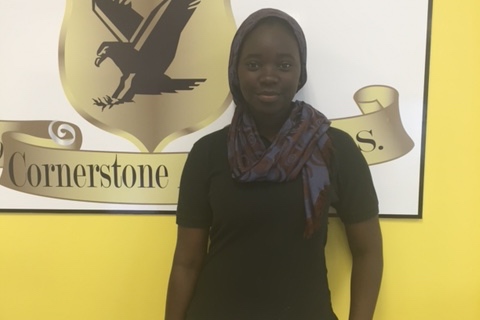 Fatima Ndiaye finished eighth grade last year at the Cornerstone Academy for Social Action in Eastchester. Though she opted out of state tests, the English Language Learner still said she spent a lot of time taking other standardized tests. (Photo: courtesy of Cornerstone Academy.)

State law is supposed to cap state and local testing at a maximum total of 2 percent of classroom instruction, but the rule doesn't apply to ELLs and students with disabilities, who may take longer on state tests since they are now untimed, officials said.

The lack of a cap is so the students "can demonstrate what they know and are able to do, consistent with the testing accommodations to which they are entitled, unencumbered by the time constraints for standardized testing specified in this law," according to a state education official.

Yet, fewer than 5 percent of English Language Learners were found to be proficient on the state's English exam and only 13 percent passed the state math exam, according to the 2016 state tests. And while the rest of the city's public school students showed an increase in test scores, the ELL students were the only group in the city that saw its recent scores decline.

In addition to the state tests, ELL students are also subjected to the NYSESLAT, as well as performance tests that measure their levels at the beginning and end of the school year and all the underlying practice tests. The performance tests are given at the discretion of principals and are used at many schools — not only ones with ELLs — for teacher evaluations.

However, many high-performing schools in wealthier districts opt to not only skip the performance tasks, but also skip a lot of the practice tests, according to teachers and parents familiar with the testing schedule.

Critics of aggressive testing have long questioned the value of a test-centric curriculum — and say it is especially toxic to new arrivals.

“It’s excessive. Testing is at the heart of everything. It’s all-encompassing,” said Katie Lapham, who teaches English Language Learners at a Sunset Park elementary school and writes the Critical Classrooms blog.

Even self-avowed test defender Schools Chancellor Carmen Fariña has spoken out against aggressive testing of ELL students — once telling parents that if she had a child who was a newly-arrived immigrant, she would opt out rather than subject them to tests.

“I want the NYSESLAT as a whole eliminated,” Fariña said an invite-only meeting in March with parents who are part of the opt-out movement in Brooklyn's District 15.

She also decried forcing ELL students to take the state English test a year after their arrival in the country as counterproductive since “this particular criteria of putting kids through something that there’s no way they can succeed at” is grounds for opting out, in her mind.

The chancellor has since dialed down her comments on the NYSESLAT.

"The chancellor has some concerns about the NYSESLAT that are being discussed and reviewed, and she’s not advocating for its removal," DOE spokeswoman Yuridia Peña said last week.

Fariña is, however, asking Albany to waive state English and math tests for new New York City immigrants for their first two years, she said, according to Politico. Right now students have a one-year reprieve.

Lapham estimated that she once spent more than a quarter of her school year — 40 out of 180 school days — devoted to test-related activities.

Instead of spending those days with her students, she had to proctor the state English and math exams as well as make-ups, and also give one-on-one sections of the NYSESLAT to more than 150 English Language Learners in her building.

She prepped the test materials — cutting labels for test booklets, counting rulers and protractors. Finally, she and her colleagues had to score the writing portion of the test.

At one low-performing middle school in The Bronx where many students are English Language Learners, the entire school was put “on lockdown” for four periods straight so that kids could be given an hours-long practice English exam their first week, according to an English as a Second Language teacher, who asked to remain anonymous to protect her job.

Students in all classes — not just the ELL rooms — were prohibited from leaving their rooms, even to go to lunch if their lunch period happened to fall at the same time as the test, she said.

While the teacher acknowledged that the intense test protocol seemed to have helped raise the school's scores, which it needed in order to get off a state review list, it’s taking a toll on the teaching staff.

“I’m kind of hitting a wall. I feel there’s an expiration for me," said the teacher, who may not stay much longer at the school. "I feel like sometimes I’m wasting my time grading these things rather than creating an interactive and engaging lesson."

Michael Kieffer, a literacy education professor at NYU Steinhardt School, said tests like the NYSESLAT serve an important purpose and are used to determine special services and support that students are entitled to receive under equal rights laws.

But he agrees the system has caused teacher burnout.

“I think part of the problem we have now,” Kieffer said, “is that there are not enough resources to make the system efficient. From anecdotes there are too many teachers, who should be working on instruction, who are asked to administer the NYSESLAT. In an ideal world you would add instruction, but that would require additional resources on extending the school day or school year.”

The best way to learn language, he added, was to use it “authentically,” by writing for a real audience or having debates.

“We don’t learn it by taking tests,” Kieffer said, “but tests are an important piece of it.”

Dead Man Found on 5 Train at End of the Line, Police Say

Police Shoot Knife-Wielding Man Who Charged at Them, NYPD Says

Duo Attacks 70-Year-Old Woman Who Cut Them in Line at Store, NYPD Says