5 Things We Learned About the Rooftop Gardens of New York

NEW YORK CITY — From the city streets, you can sometimes see just a hint of green shrubs and trees jutting over the ledge of the building above.

They're the rooftop gardens of New York, where those who can afford the luxury find a natural refuge from — and stunning views of — their urban environment.

"It was just breathtaking," said Zack Katzin, head of purchasing for Plant Specialists, of the view he enjoyed from one garden on his first day working for the Long City Island-based landscape architecture firm in 2008. The garden topped an 82-story building at the intersection of Sixth Avenue and 57th Street.

"I had no idea that this existed," he said.

The business calls for innovative thinking meaning, "each job is different and each client is different," said Howard Freilich, who founded Blondie's Treehouse company in 1979.

”You’re getting to create and do work for people who have visions for what they want," which can get as specific as a covert outdoor shower overlooking the Hudson River, "and also have the financial abilities to have some of the things that they’ve worked their whole life for created."

Here are five insights Katzin and Frielich shared about the luxury world of rooftop gardens:

When you're choosing plants for a garden 15 stories above street level, you have to consider wind, weight and building regulations.

The higher up your garden, the colder the weather and the stronger the wind it has to contend with.

At ground-level in New York City, plants are usually hardy enough to survive lows of 5 degrees. When it comes to the roof on the 35th floor of a waterfront building in Manhattan, however, "the plant palette that we have to pick has to be plants ... similar to what would be growing in Switzerland in the Swiss Alps," Freilich said.

High winds raise other challenges. They can dry out flora and knock over trees.

The latter is a particular concern for rooftop gardeners, because not all roofs can bear the weight of the deep soil systems tree roots require.

"Some roofs, you’re able to do planters that are 18 to 24 inches deep, full of soil and plants," Freilich explained. "Other roofs, because of the weight load, you can only do something that’s an extensive soil system, which is only 4 inches high."

Building regulations may also stipulate that plants be under a certain height.

Among the plants you'll typically see in a rooftop garden, according to Katzin, are trees like birches and maples, flowers like hydrangeas and irises, vines like ivy and wisteria and perennials like yarrow and lamb's ear.

There's a lot more to installing a rooftop garden than planting trees and flowers.

The process involves all kinds of work, from irrigation to paving to lighting. That means a large installation can take up to three years from first conception to first planting, Katzin said.

A good irrigation system can be incredibly complex, with multiple lines of hose running from one source and timed to water plants in different zones at varying intervals. Katzin said it can take him months to figure out that timing, which he later must adjust as the seasons change.

Garden lighting is less essential than irrigation, but Freilich compares it to the molding in an apartment — a "finishing touch" that accentuates.

"If you have a beautiful landscape and you light it with the right kind of lighting," Freilich said, "it creates such shadow and movement that it really makes a garden pop."

But — wait a minute — how do you get all the materials you need up to a roof in the first place? With service elevators, cranes and old-fashioned might.

Before an installation even begins, "it takes a lot to just to get the stuff there," Katzin said.

”You’re going sometimes down a flight a stairs and through the bowels of this building to a service elevator that might take you up so far, and then, sometimes, you have to go up two to four flights of stairs."

In pre-war buildings where the elevator doesn't go all the way to the roof, Blondie's Treehouse employees will often create a pulley-ramp system for the uppermost flights of stairs, Freilich said.

When there is no elevator, as is the case in four- or five-story brownstones, Plant Specialist teams sometimes carry everything up the stairs — including, now and then, paver stones that can weigh as much as 300 pounds.

And when features like 20-foot trees or an 18-by-15-foot stainless steel pool won't fit in any staircase or elevator, cranes are an option that Blondie's Treehouse is resorting to more often these days. 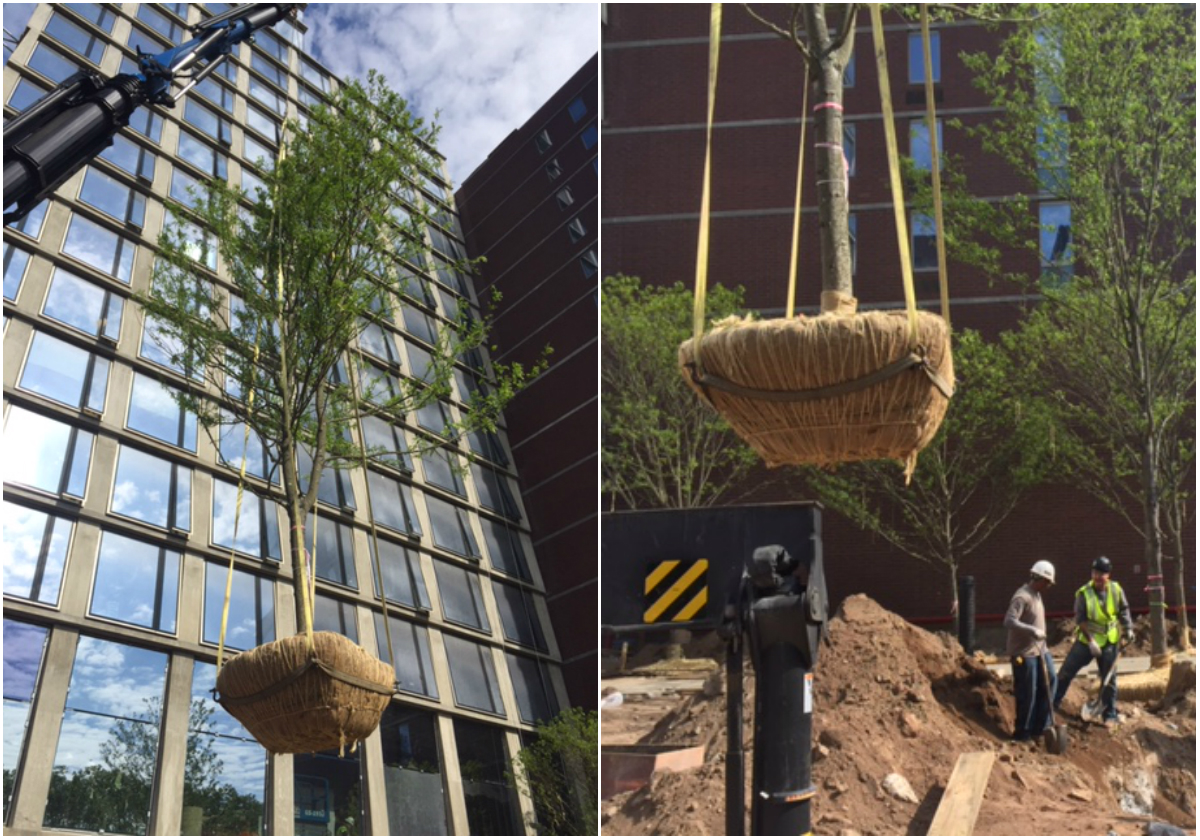 A crane lifting trees to the roof of Ian Schrager's hotel and condo development at 215 Christie St., currently under construction, on the Lower East Side (Credit: Blondie's Treehouse)

Rooftop gardens and landscaped terraces are as expensive as you imagined.

At the lowest end of the price scale, a 10-foot-by-10-foot terrace may cost Plant Specialist clients $20,000. The company can also charge upwards of $1 million for one project.

As for Blondie's Treehouse, the company's first substantial exterior landscaping job brought in $175,000. Its second, a multi-purpose roof deck for the Caledonia Luxury Apartments in Chelsea, reaped a $700,000 profit.

”The contracts kept on getting bigger, bigger, and bigger and now presently, we're working on contracts where they’re in excess of a few million dollars," Freilich said.

So yes, it's really only the large corporations, movie stars and anonymous executives that can afford professionally landscaped rooftop gardens.

Blondie's Treehouse clients include Viacom and the Plaza Hotel, the former of which has three organically grown herb gardens on the seven-floor setback of its Times Square building, and the latter which is getting beehives on its roof.

Besides lunch or reading during your break, INSTEAD you can pick your own herbs in the Viacom Herb Garden! #Viacom #NYC

As for the identity of individual clients, Freilich said, "Our clients are so famous that we have to sign NDAs so we keep their anonymity."

Katzin, too, declined to publicly name the owners of gardens he has worked on, but they include an Oscar-winning actress, a Grammy-winning singer and a media executive.