'Build It Back' Head Should Quit or Be Fired, Councilman Says

ROCKAWAY PARK — The head of the failed city-run Build It Back program should be fired or resign after the controversial rebuilding debacle proved to be a "boondoggle" of bureaucratic red tape and poor construction work, a local elected official said.

Standing in front of a home emptied months ago for promised Build It Back work that has yet to begin, Councilman Eric Ulrich demanded program director Amy Peterson step down — saying "things can't get any worse."

"Amy Peterson has very good intentions, I'm sure that she gives 100 percent to her job," Ulrich, who represents Rockaway, said Monday. "But she is simply in over her head. She is not able to effectively turn around the program, and if you want to see change, change has to start at the top."

Peterson was appointed by the mayor in 2014, and was unable to successfully manage a program that's "broken, it's not working, it's inefficient, it's a bureaucratic nightmare, it's a boondoggle," Ulrich said.

► Build it Back Was a 'Categorical Failure,' Its Creator Says
► Sandy-Damaged Home Collapses After Being Raised Onto Stilts, Officials Say
► City Forced Us From Our Homes for Sandy Fixes Months Ago, Residents Say

Ulrich stood with Ellen Nichtern, 59, in front of her family's home on Beach 117th Street, which she and her 86-year-old mother, also named Ellen Nichtern, moved out of at the city's behest in February.

Their tenants each took a single room across the street.

Their home, which took on water on the first floor during the hurricane, was scheduled to be lifted to meet flood-zone standards. Build it Back officials told them the whole process would take five months — but after six months the only work that's been done is the installation of a green construction fence, they said.

"They want it to look like they're doing something," Nichtern said, adding the program has run into issues with the Department of Buildings over permitting.

"I don't know what they want from me. The city should have known what to do before I moved out." 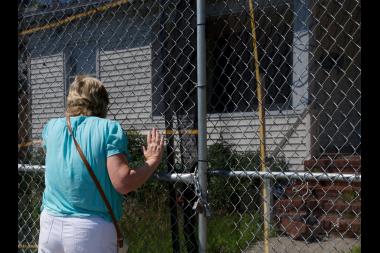 Ellen Nichtern moved out of her house in February for Build It Back work, which still hasn't started. (DNAinfo/Katie Honan)

He said he was hopeful about the program when it first began. But years of issues and countless calls and messages from constituents — who he said are going into debt and facing personal crises due to the effects of the storm — have shown it needs another major change.

"I have a moral obligation to stand here with my constituents, in my district, to demand action," he said.

Other elected officials came to Peterson's defense Monday, saying the program's issues can't be blamed on one person.

"While so many families are still struggling to survive, recovery from any disaster is a complicated effort. Its delays can't be blamed on any one person," Assemblyman Phil Goldfeder said. "Unfortunately regulations at every level have really slowed down the process."

Councilman Donovan Richards said he gets monthly updates from the program on his constituents, and defended Peterson's communication.

"We're not at the finish line yet, but they are working hard," Richards said.

In a statement, a spokesman for the mayor's office said, as they have repeatedly following criticism, that the program finally got going under de Blasio — after stalling under former Mayor Bloomberg.

"When Mayor de Blasio took office and appointed Amy Peterson to run the program, not one homeowner had received a check or seen construction. That is why this administration immediately overhauled the program and took over direct management - resulting in 80% of homeowners served to date," he said.

"Further, $120 million in reimbursement checks have been issued to residents. We are continuing to elevate and rebuild homes across the City and Staten Island to complete the program — as the Mayor committed — by the end of this year.

Homeowners have in the past complained about slow reimbursements that have drained their bank accounts or put them into debt while waiting for any movement.

Selma Erey, 74, has been waiting since 2014 for her Arverne home to be demolished.

She moved out in January 2015, settling into a converted garage next to her Bayfield Avenue home so she can stay close to construction.

"I moved in so I can monitor them — but they're doing nothing," she said, although the home was finally demolished last month.

She qualified for her rent, mortgage and storage to be covered by the multi-billion-dollar program because of her income, she says.

"It's my seventh month not in my home and the foundation isn't even in yet," she said. "I just want to be home."