BROOKLYN — How much more would you pay to have another bedroom?

The cost to trade up to a two-bedroom from a Ditmas Park one-bedroom apartment was too steep for Chris Morocco and his family of four, so instead they turned their “junior 4” apartment’s windowed dining area into a second bedroom.

“We were shocked by how much prices had increased since my wife had bought her apartment 7 years ago,” said Morocco, 36, a magazine editor, whose family wanted to stay in the neighborhood.

So, instead of moving, they embarked on the renovation, which included a kitchen and bathroom makeover that cost about $55,000 for design and construction.

Sale prices jump significantly as you add bedrooms, especially when going from a one- to a two-bedroom. Because of that, many brokers are seeing an uptick across neighborhoods in conversions of one-bedrooms to two-bedrooms — whether young families are doing it to survive with kids or sellers are doing it in hopes of fetching more for their digs. 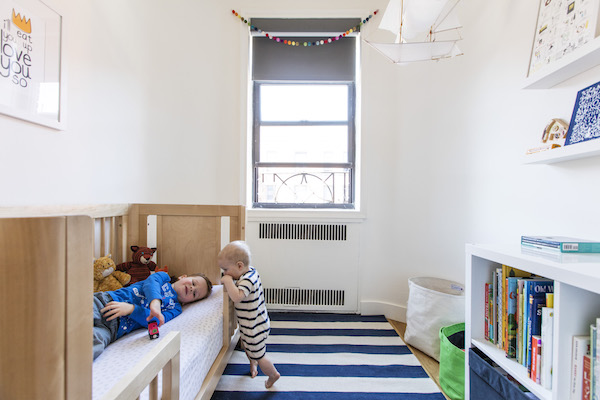 In Brooklyn, the spread between moving from a one- to two-bedroom was smaller, but still significant — about a 63 percent jump, according to first quarter data from Corcoran, where the median for a two-bedroom was $960,000 — or $372,000 more than a one-bedroom.

Morocco was happy with his decision to renovate, finding his contractors through Sweeten, an online resource that connects homeowners with local design and construction experts. Once the project was complete, Sweeten featured the project on its blog.

Moving wouldn’t really have solved much more than the renovation had, Morocco said, noting that many of the two-bedrooms in Ditmas Park had about the same square footage of his one-bedroom. 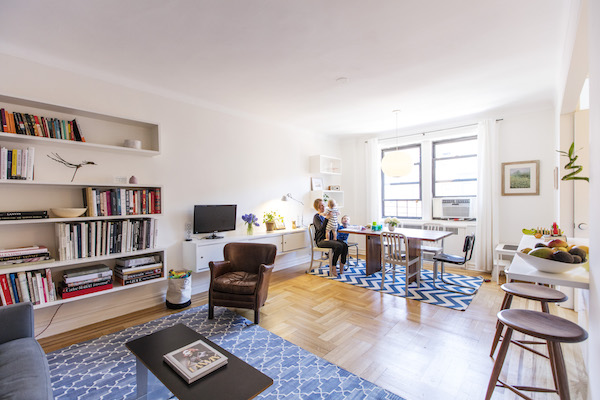 The renovation enabled Morocco’s older son, 3, to have his own bedroom, while his younger son, 1, shares the couple’s bedroom.

“Getting our son into his own room gives us our living room back since we can keep all the toys in his room, and while it isn't ideal to have to share our bedroom it can definitely work for a while longer.”

But the project will only be sustainable for so long, Morocco noted.

“The only drawback of the renovation is that it is a temporary fix. We might have a few years left there but the space isn't getting any bigger, just our kids.” 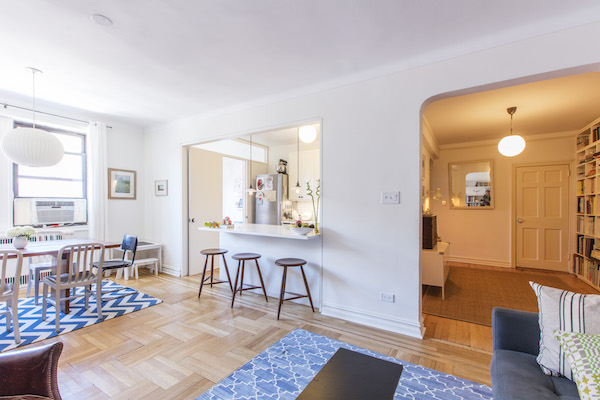 Another view of the kitchen of Morocco's renovation with the door to the new bedroom opening onto the kitchen. Photo: Sweeten

While some buyers think the market is slowing down, that’s not what Mdrn. broker Kobi Lahav has seen, particularly in Manhattan, where couples are increasingly settling for Junior 4's when they see the price of two bedrooms.

“Two-bedroom clients spending $1.7, $1.8 [million] tend to think that they are the only buyers in town since they are spending so much," he said, "not realizing that in certain cases $1.7 or $1.8 is actually a bargain for a two-bedroom."

According to data compiled by real estate expert Jonathan Miller, in the rental market, the price also jumps most when going from a one- to two-bedroom, as opposed to price comparisons between studios and one-bedrooms or between two-bedrooms and three-bedrooms.

The gap, however, was more narrow — it was about 37 percent, or $1,243 a month more expensive, to get another bedroom.

Rentals tend to have a smaller price gap for additional bedrooms, Miller explained, because in the rental market, the premium for landlords is on the smaller units on a per square foot basis, while on the sales side, the premium is for bigger apartments.

“Whether or not it actually comes to pass, a rental is seen as a shorter-term occupancy and more transient," he said. "You can endure a smaller space for a shorter period of time.”

Even so, rental prices are out of reach for many New Yorkers, which can lead to makeshift conversions — using temporary dividers like bookcases and curtains to create separate (and not very private) bedrooms.

Lahav recently had a client who was looking for a studio for herself after sharing a two-bedroom apartment, with two other girls.

"She was shocked to understand that while sharing a room in a convertible-three in the Upper East Side costs her around $1,250 a month in a doorman building with laundry, a studio, on the other hand, will cost her around $2,500 a month in a comparable building.”

She decided to stay with her roommates.