BROOKLYN — The city has increasingly been finding creative ways to turn old structures into new spaces for artists, tech jobs and affordable housing.

“Our neighborhoods are full of remarkable buildings that trace the rich history of our city, from firehouses and schools, to warehouses and factories,” said Ryan Max, a spokesman for the city’s Department of Cultural Affairs, which has been working with the city’s Economic Development Corporation on many of these projects.

“The city is committed to giving these historic facilities new life as vibrant hubs for culture and community,” Max said.

Here are some projects — either under construction or in the planning stages — that adaptively reuse landmarked public buildings. 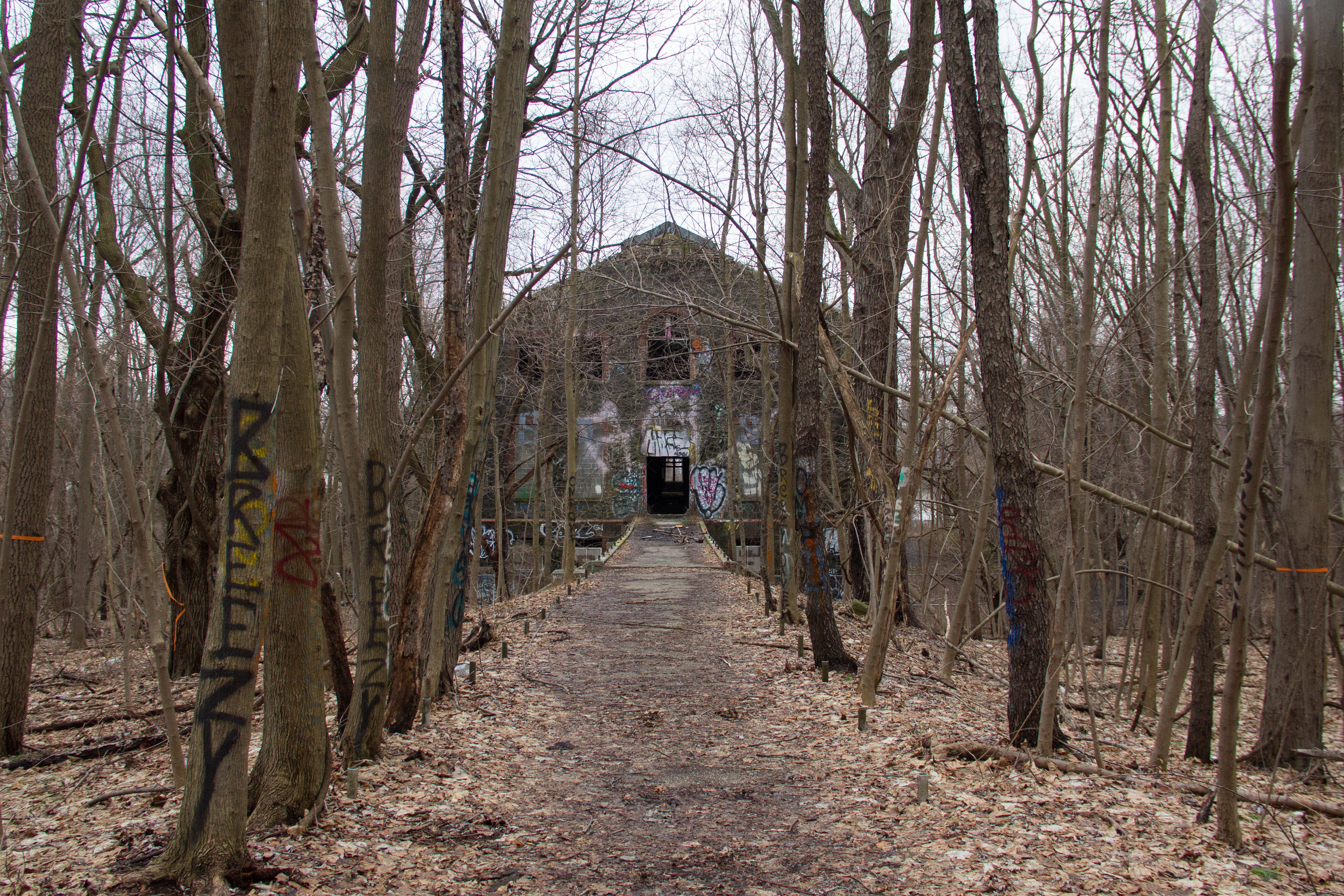 This 43-acre site opened in 1829 as the Richmond County Poor Farm, where residents were required to work farming fruits and vegetables. It later served as a hospital and senior home until closing down in 1975.

Despite falling into disrepair and becoming a haven for graffiti artists, it was landmarked in 1985.

Now, two architects are planning to revitalize the former farm as a residential community for about 600 seniors with parking lots, retail, a club house and community areas, as well as 17 acres of public open space.

"It will be cleaned up, you're not going to see all this bramble out there, but it would be a shame at the end of the day, I think, if we come up with a plan that makes this look pristine without maintaining some of the rough edges,” architect Pablo Vengoechea, co-owner of Vengoechea + Boyland Architecture/Urban Planning, LLP, previously told DNAinfo New York.

Five of the existing buildings will be reused as apartment buildings; another will be preserved as an historic ruin. 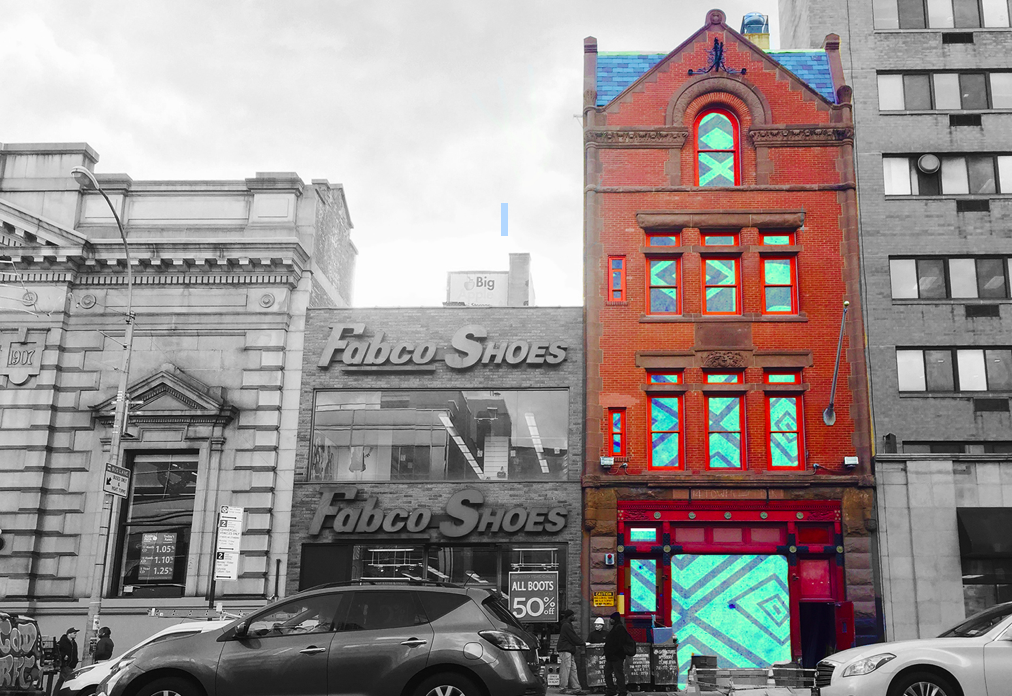 The new space, as envisioned by the Caribbean Cultural Center African Diaspora Institute.

This vacant 8,500-square-foot, four-story firehouse on East 125th Street is getting a second life as a cultural center focusing on the traditions of the African diaspora.

The former home of the FDNY Engine Company Number 36, received landmark status in 1997 and was decommissioned in May 2003. The institute will use it for concerts, gallery tours, performances and artist residencies, as well as office space.

“At a time that the 125th corridor, much as many other areas before it, weathers rapid gentrification, our move gives us a space to stand strong for the African Diaspora that has made East Harlem the vibrant and unique area it is today,” the institute states on its website, noting that the move — delayed by nearly a year — has been a “journey of grit and love.” 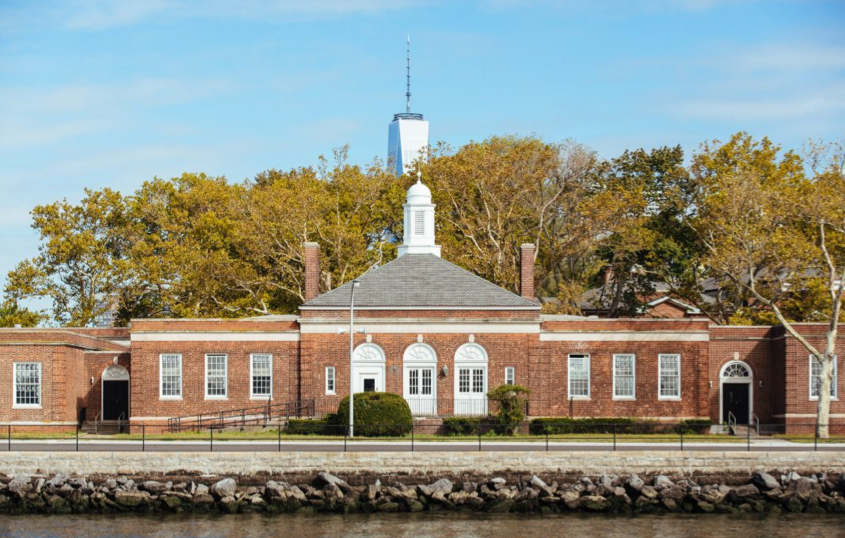 Spaceworks, a nonprofit cultural community organization, is transforming this 21,000-square-foot former school into 43 studios for visual artists and a larger space for rehearsals.

There’s already a strong arts presence on the island with the Lower Manhattan Cultural Council’s artist residencies, the Figment festival and an art fair staged by 4Heads, but these year-round studios would give artists a “longer stake” on the tranquil sliver of land only accessible by boat, said Spaceworks’ Paul Parkhill.

Though a complex endeavor, a gut rehab will still be cheaper than ground-up construction, said Parkhill, noting the dearth of affordable space for artists. 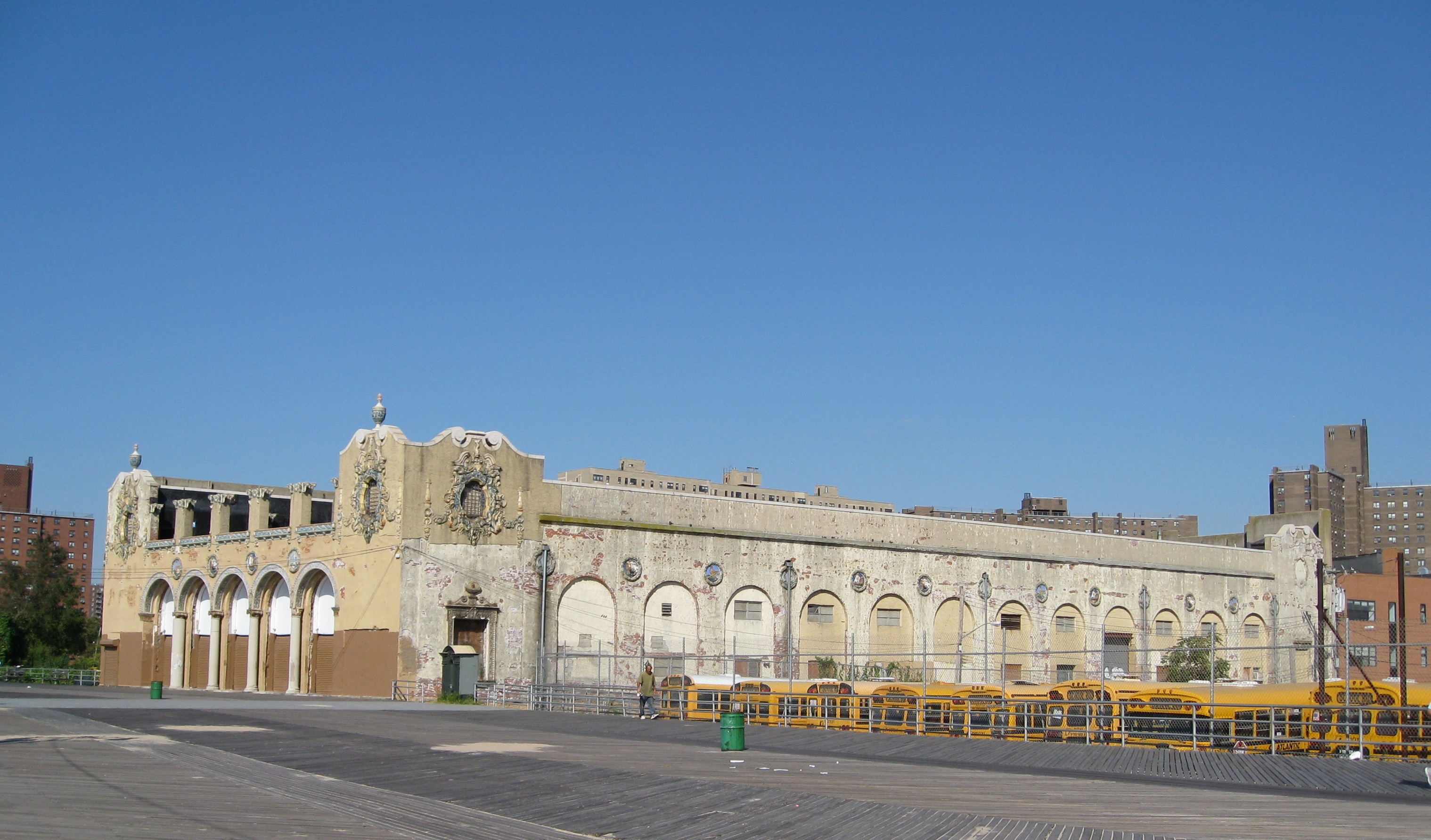 The historic 1920s-era Child’s Restaurant, later became a candy factory, and then, in recent years, a roller skating rink operated by Lola Star.

Developer iStar is now renovating the 60,000-square-foot landmark, as a year-round restaurant with a rooftop bar, bringing in Dutch paint specialists to restore the façade and adapting the space to guard against possible future storms like Sandy, according to the New York Times.

Next door — in a lot facing a legal challenge from a community garden — a 5,000-seat amphitheater is slated to open this summer with upcoming performers including Ziggy Marley, the Beach Boys and Matisyahu. 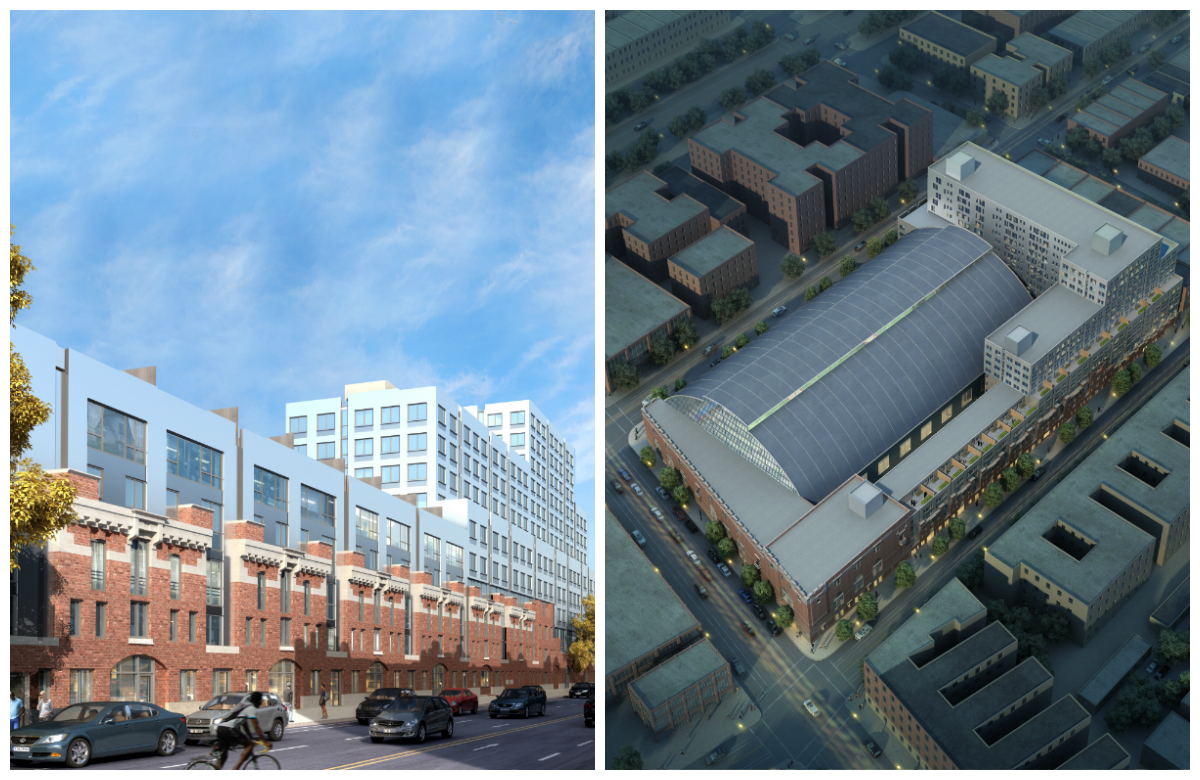 The sports center will include a swimming pool, turf field and basketball courts. There's also expected to be a community space, operated by the nonprofit CAMBA, that could hold up to 500 people inside the armory was vacated by the military in 2011.

David Schwartz, co-founder of Slate Property Group, one of the developers of the project, has said his team was attuned to the area’s issues with gentrification and displacement fears and wanted to involve the community because of that.

It is one of several city armories that have been or are being transformed, including the Park Avenue Armory (now a premier arts venue on the Upper East Side), the Park Slope Armory (now a YMCA, women’s shelter and veteran’s museum) and the Kingsbridge Armory (a controversial $350 million Bronx project to build ice rinks, an arena, and community centers). 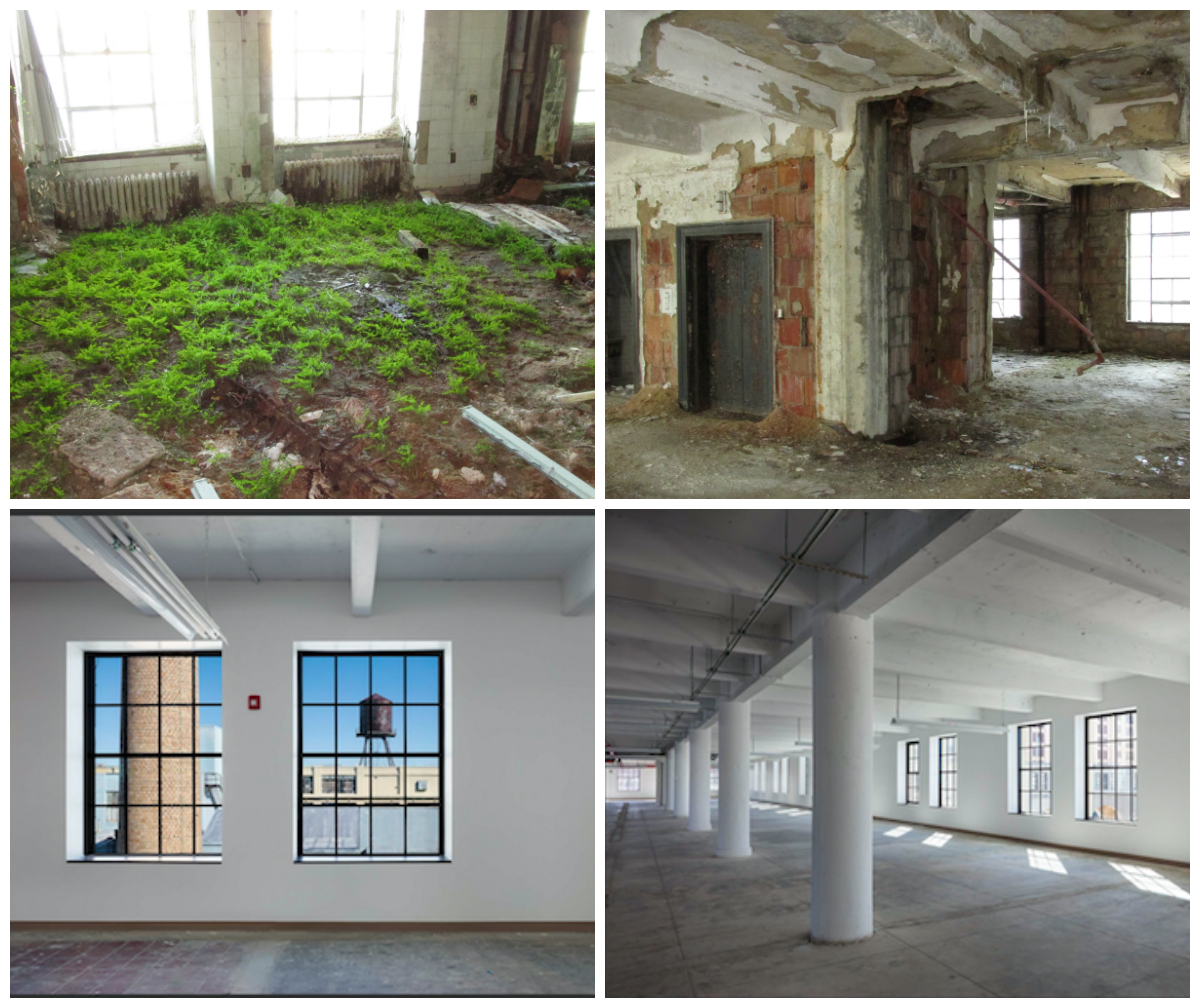 Before and after images at BAT. Photos: NYC Economic Development Corporation.

The massive, hulking complex was the largest concrete building in the world when it was completed in 1919 as a military depot.

The city purchased the 95-acre complex from the federal government in 1981 — and ever since has been slowly overhauling the vast vacant spaces into an industrial hub.

Roughly 3.5 million square feet have been overhauled to date and are now filled with manufacturing, tech and design companies including Urban Green (sustainable home furnishing’s showroom is there), Jacques Torres (the chocolatier’s production facility is there) and Chashama (an arts organization with 93 artist studios at BAT). About 3,700 people are employed there, EDC officials noted.

After spending nearly $200 million on BAT over the last 5 years, the city is dedicating another $100 million to build out the remaining 500,000 square feet, EDC officials said.

EDC is also in the process of selecting an operator to create an “Advanced Manufacturing Center” at BAT with shared workspace and access to high-tech equipment, which is part of the city’s “Futureworks” initiative to support the long-term growth of manufacturing in the city.