Here's How the East New York Rezoning Plan Could Affect You

EAST NEW YORK — After nearly two years of studies, hearings and negotiations, the rezoning plan aimed at bringing affordable housing to East New York got a City Council stamp of approval with a 45-1 vote with no abstentions Wednesday.

East New York sets the stage as the first of 15 neighborhoods targeted by Mayor Bill de Blasio to be rezoned as part of the administration’s city-wide plan to build and preserve 200,000 affordable homes.

It serves as a litmus test for other types of plans that may roll out over the next decade.

With zoning changes, developers would be allowed to construct taller buildings in exchange for a commitment to including below-market-rate apartments, which could also make room for more retail and community spaces.

DNAinfo outlined some of the changes expected, based on the city’s plan.

Starting in 2011, the city worked with the community to identify opportunities for the neighborhood to grow, including vacant land that could be developed, more fresh food and business variety, and jobs. With several subway lines, buses and the Long Island Rail Road, East New York was chosen for study for the possibilities it held as a transit-rich location.

It was the first neighborhood identified for a zoning revamp based on a federal-funded study focusing on the area called Sustainable Communities East New York.

What areas will be affected?

Approximately 190 blocks in northern East New York, Cypress Hills and Ocean Hill are targeted under the plan. In East New York and Cypress Hills, the area is bordered by Sheffield to Lincoln avenues and Fulton Street to Pitkin Avenue. In Ocean Hill, the affected area is from Eastern Parkway Extension to Van Sinderen Avenue, and Broadway to East New York Avenue.

Mom-and-pop shops, bodegas and fast food spots line Fulton Street under the elevated J and Z lines, as well as Pitkin Avenue, with retail on the ground floor and housing above going up to four stories.

How could it look after the rezoning?

You can expect to see taller buildings throughout the neighborhood and more than 19,000 new residents could come over the span of 15 years, according to a city study.

Apartment buildings with street-level stores could rise as high as 14 stories along Atlantic Avenue. Fulton Street and Liberty Avenue could see housing up to eight stories with retail on the first floor, and developers could build up to 10 floors on Pitkin Avenue.

Mostly industrial areas can shift to residential, which could also lead to a population change of more office employees living in the area instead of blue-collar workers, Agnotti said.

How much affordable housing is coming and how soon?

More than 6,000 apartments are expected to be built, and the city is looking to have half of those developed through 2024 to be affordable to those making between $23,350 and $69,930 for families of three. The other half would be market rate.

The newly passed Mandatory Inclusionary Housing ensures that developers commit a portion of new units as below market rate.

In addition to MIH, the city has said subsidies and other tools would make sure housing is affordable to longtime residents, but over time and depending on the market, developers don't have to accept subsidies.

More than 1,300 units of affordable housing out of the 6,000+ are planned to be built over the next two years.

Who is eligible for the new affordable housing?

For the more than 1,300 units expected over the next two years, 40 percent of apartments on private-owned sites will be available to those making below $38,850, with more on city-owned property.

Critics of the plan have said the affordability levels don’t go low enough, and stress that 50 percent will still be market rate. 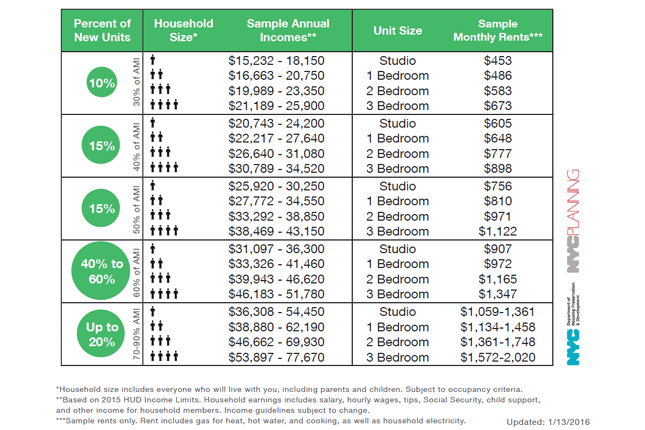 What if I’m renting or live in a rent-regulated apartment?

Rent-regulated affordable housing are apartments that receive government assistance including NYCHA, are covered by agreements that restrict rents, or are rent stabilized.

Many longtime residents are worried the rezoning will result in property values going up, and in turn, landlords resorting to tactics to push them out and increase rents.

Landlords use “a lot of tricks,” Agnotti said, including not making repairs, sending people to sell drugs in the hallway or allowing homeless individuals to live in the building to force people to move out, and more to create displacement. They can then renovate the apartments and rent them at higher costs.

The Department of Housing Preservation and Development has said they’ll monitor rent-restricted units and work with local and states agencies on helping tenants with complaints, and also expand financing and tax incentive programs for owners to keep rents low.

One example is a program that would help small building owners finance energy improvements and property rehab in exchange for keeping rents affordable.

Over the next five years, tenants who are harassed by their landlords can also get free legal assistance, according to the city, and officials said that those who are displaced can apply for affordable housing.

What if I’m a homeowner?

As more people move to the area and the neighborhood gains popularity, property values are on the rise, experts say.

Owners have received offers on their homes, with speculators offering cash up front to flip properties.

Many investors have been eyeing the neighborhood, according to Halstead Property broker Ban Leow, with most playing a “wait-and-see game” on the area’s transformation.

Even one day after the City Council approves the rezoning, the potential value of land will go up “enormously,” Agnotti said.

To address concerns of speculation and unwanted solicitation, city officials say they can work with the community to create a “Cease and Desist Zone” in East New York. The city doesn’t directly control the zone.

Under the designation, homeowners can tell the state that they don’t want to receive mail, calls or visits from brokers or other real estate reps about selling their property. Currently, there are no valid Cease and Desist Zones, according to state officials. Once in effect, a list is valid for five years.

The city’s also looking to open a Homeowner Helpdesk to help with other issues like loans for repairs, foreclosure prevention and scams including deed theft.

What if I’m a business owner?

East New York is home to a variety of mom-and-pop shops, 99-cent stores, and other retail, but many locals say they have to go elsewhere for necessities like clothing and good quality produce.

Commercial rents will likely rise, experts say. Businesses could be displaced and workers would lose their jobs due to development and lease agreements with landlords.

Some business owners fear they won’t be able to afford their spots, and longtime clientele will leave the neighborhood.

In their plan, the city said they’ll give resources to owners including help with lease negotiations. A new Neighborhood Retail Preservation Program would also require developers to set aside discounted space for local businesses, and some could relocate.

Owners could see high-speed Internet coming to their businesses, as the city said they’ll continue to work with the neighborhood’s existing Industrial Business Zone and invest $16.7 billion in improvements. The IBZ spans from Atlantic to New Lots avenue and is bordered by Christopher and Shepherd avenues.

Businesses could also get a new digital marketing campaign for promotion and advertisement, as well as solar energy, training courses, and programs for local hiring.

Owners may be able to use a planned Workforce 1 Career Center to hire from the neighborhood.

What if I’m a parent?

A new $98 million, 1,000-seat elementary and junior-high school is planned for School District 19 at a city-owned site at Dinsmore Place and Chestnut Street. Construction could start as early as November 2017, and finish by the end of summer in 2020.  At the property, kids would also be able to use a playground open during non-school hours.

The rezoning could result in a shortage of space at publicly-funded childcare centers, due to an increase in population. The city’s looking to open or renovate a center at 3289 Fulton St. near Euclid Avenue, depending on funding. If funding isn’t granted, there could be centers at other sites.

Other major takeaways from the plan:

► Re-paved roads on Fulton Street from Essex to Hale and Ridgewood Avenue from Jamaica to Elton, Euclid to Eldert.

Teens Attacked After Being Lured to Subway Station Via Facebook, NYPD Says

NYPD Officer on Trial for Murder of Unarmed Dad Feared for His Life: Lawyer