NEW YORK CITY — Mayor Bill de Blasio on Wednesday announced Hornblower, Inc. as the operator of the city's first Citywide Ferry service, which is set to launch in June 2017.

The ferry ride — which will shuttle passengers from neighborhoods including on the Rockaway peninsula, Bay Ridge, Sunset Park, Red Hook, Astoria and Long Island City to Manhattan — will cost the same as a MetroCard ride and run an estimated 4.6 million trips a year when it's fully operational in 2018, the city said.

De Blasio was joined at the company's pier Wednesday afternoon by City Council members who praised the mayor for getting it "right."

"This is a very good day," said Councilman Donovan Richards of Far Rockaway. "This is about transit equity, it's about ensuring the outer boroughs have access to transportation."

The mayor said he hopes the ferries will be able to offer a free transfer to subways and buses operated by the MTA, but that would require an agreement with the state-run agency.

Another of the mayor's signature transportation projects, the proposed $2.5 billion Brooklyn-Queens streetcar, also currently will not include free transfers to MTA buses and subways.

De Blasio has publicly feuded with Gov. Andrew Cuomo over transportation funding, among other issues.

"This is in the category of 'Rome wasn't built in a day,'" de Blasio said about connecting the ferries to the MTA's payment system. "It's a good goal. We are not there yet."

Deputy Mayor Alicia Glen announced earlier this month the ferry service would begin in June 2017. Approximately 12 ferries would be in operation in its first year, with the remaining six boats up and running by 2018.

"It has been more than a century since this great coastal city has had citywide ferry services," said de Blasio. "In the history of New York City, ferries are the way that people used to get around and it was part of everyday life. But in the last 100 years ferry service declined and declined."

But with the city's population at a record-high of 8.5 million people and growing, "all those people need more and better transportation options," said the mayor.

"We've got the most obvious solution staring us in the face. Our rivers, our harbor and the amazing opportunity that citywide ferry service will provide to this city," he added.

The six-year contract with Hornblower will cost the city at least $30 million per year, said Glen. That averages out to a subsidy of about $6.60 per ride which is less than other subsidies for the Long Island Rail Road and express buses.

The city will have the option to purchase the boats from Hornblower during the course of the contract, preserving the possibility that the city could operate the service if necessary.

Several other companies bid on the contract. The New York Water Taxi, affiliated with The Durst Organization, said last week it would end service in October because it didn't expect to be selected to run the Citywide Ferry plan.

"As word spread that the Economic Development Corporation will award a citywide ferry service bid to an out-of-state provider, the company has had to reevaluate its viability," the company said in a news release. The company, which runs tourist boats and year-round service to the IKEA and Fairway docks in Red Hook, said it couldn't survive competing against other companies getting generous government subsidies.

When asked why he selected Hornblower over the other bidders, de Blasio on Wednesday praised the San Francisco-based company and its proposal.

"We chose Hornblower because their proposal was better, period, on many levels," he said. "And they've done great work in the harbor."

He added that there's "plenty of room for everybody in this harbor" because the other services focus on excursions and tourism.

"It's called competition. People compete. Someone wins," said the mayor.

As part of this deal, the city purchased NY Waterway's East River Ferry service which provides service to Brooklyn, Long Island City and Governors Island. The routes will now be operated by Hornblower.

The city purchased the boats, paid NY Waterway a termination fee to end its contract early and paid for associated marketing costs. City officials said they could not immediately provide the exact amount of taxpayer money spent to complete the transaction.

In 2018, it will be expanded to include Soundview in The Bronx to stops in Manhattan, and the Lower East Side to East 34th Street. 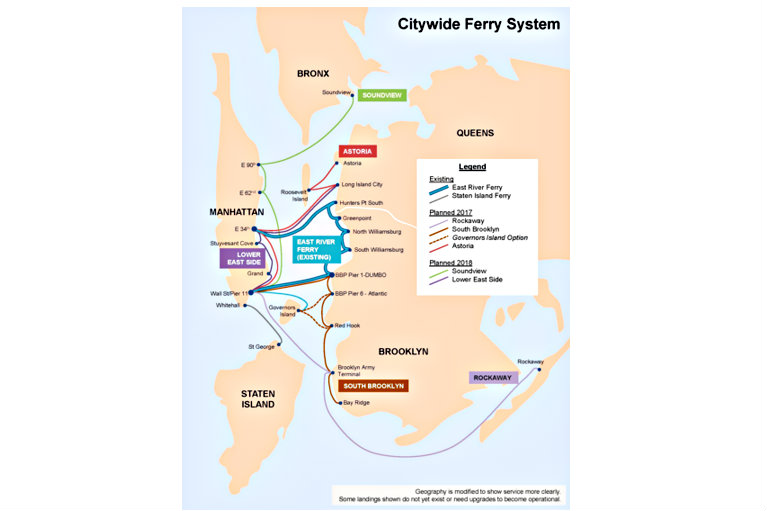 The boats will offer snacks and beverages, including alcohol, according to Hornblower and the EDC.

De Blasio also said he was committed to providing shuttle bus service on the Rockaway peninsula to help all residents access the ferry.

"I'm guaranteeing shuttle bus service to the ferry landing," he said, which will be at Beach 108th Street in Rockaway Park.

Councilman Richards pushed him on the issue, although the route so far won't go any further east than Beach 67th Street — which isn't even in the councilman's district.

The EDC said running buses further east wasn't feasible because the bus would take too long, and riders would literally miss the boat.

There is money — set aside by former Congressman Anthony Weiner — to build a second dock, but due to height restrictions from the A train bridge, it can't be built further east than Beach 84th Street.