Liang faced manslaughter, criminally negligent homicide, and other charges, and had previously pleaded not guilty.

"It's about innocent life. I was overwhelmed. I'm not rejoicing, but justice has been served," Gurley's aunt Hertencia Petersen said of the verdict.

The jury deliberated for nearly three days before coming back with their verdict.

One juror who did not want to give their name called it a "very, very, very difficult, tough decision." They added, "I gotta face my family, half of them are cops." 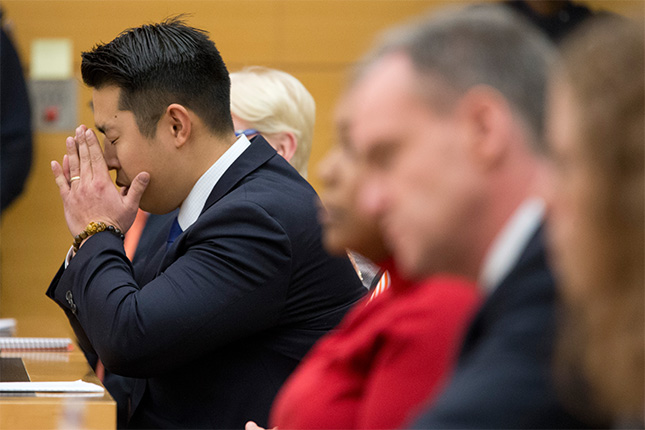 On the second day of deliberations, the defense pushed for a mistrial but the Brooklyn Supreme Court judge denied the motion. The defense had claimed the prosecution's assertion during closing arguments that Liang deliberately pointed and fired the gun at Gurley were "inflammatory and unfair." Liang's attorney maintained his client responded appropriately after the shooting and reached out for help immediately.

Liang faces up to 15 years in prison and is no longer a member of the NYPD following the verdict.

Here’s what we know about the case:

► What do prosecutors say happened?

Rookie officer Peter Liang, 28, and his partner Shaun Landau were doing a top-to-bottom patrol of the Pink Houses, a Brooklyn housing development at 2724 Linden Blvd. on Nov. 20, 2014, when Liang accidentally fired his gun in a dimly-lit stairwell. The bullet ricocheted off a concrete wall and fatally struck 28-year-old Gurley in the chest, according to police.

Prosecutors presented video showing the dim stairwell where Gurley was shot and his bloody clothes left there in the aftermath. (Photo credit: Brooklyn District Attorney's Office)

Prosecutors charged that Liang did nothing for four minutes while Gurley bled to death, retreating back into the hallway while arguing with his partner about what to do.

Liang worried about his career, and said “I’m going to be fired for this,” according to officials, but even after realizing he shot Gurley, he failed to provide medical assistance.

Gurley's girlfriend, Melissa Butler, who witnessed the shooting, testified at the trial that she couldn't recall seeing Liang the night of the incident. Butler said she braided Gurley's hair that evening and escorted him to the elevator as he left for the night. The elevator didn't come, so the two headed for the stairwell, with Gurley in the lead.

“The door… slammed into the wall, and then a shot went off,” Butler testified. Gurley, bleeding from the chest, ran briefly before collapsing, she said.

Butler notified a neighbor on an adjacent floor who called 911. Butler then attempted to perform CPR on Gurley at the dispatcher's direction. Neither Liang nor any residents from her floor came to help, she said.

NYPD Commissioner Bill Bratton described Gurley as a “total innocent” after the shooting. Elected officials and activists have rallied over the incident, saying it echoes other local and national police-involved deaths.

During his trial, Liang remained on the force, but on modified duty without his weapon.

NYPD Officer Shaun Landau told the court that he and Liang squabbled over who should call their superiors for four minutes after shooting Gurley.

“[Liang] thought he was going to be fired. I said no you're not, it's just an accidental discharge,” Landau said. “I told him to call, and he told me to call. He says 'you call.' I said 'you call',” Landau testified in court on Feb. 3.

Liang eventually radioed the incident in after seeing Gurley’s bloody body lying on the fourth floor staircase. But Liang only reported their location, “Pink House One” and did not specify what had happened, Landau told the court.

In his cross examination, Liang’s defense attorney, Robert Brown, called Landau's account into question. He noted that Landau had previously told NYPD investigators that Liang gave a more detailed account of what happened on the radio, including that there had been an accidental discharge, a male had been shot and that an ambulance was needed.

Landau, who has been on desk duty pending administrative charges, faces a civil lawsuit from Gurley's family but will not face criminal charges for his involvement in Gurley's shooting, officials said.

► What has Brooklyn District Attorney Ken Thompson said about the case?

Liang's indictment came on the heels of a Staten Island grand jury's vote not to indict Office Daniel Pantaleo in the chokehold death of Eric Garner.

The lack of indictment caused a public outcry as yet another member of law enforcement avoided trial in a police-involved death.

"As to those who have called for a Special Prosecutor to handle this case, I respectfully disagree. I was elected by the people of Brooklyn to do this job without fear or favor and that is exactly what I intend to do," he said just before taking the Liang case to the grand jury. 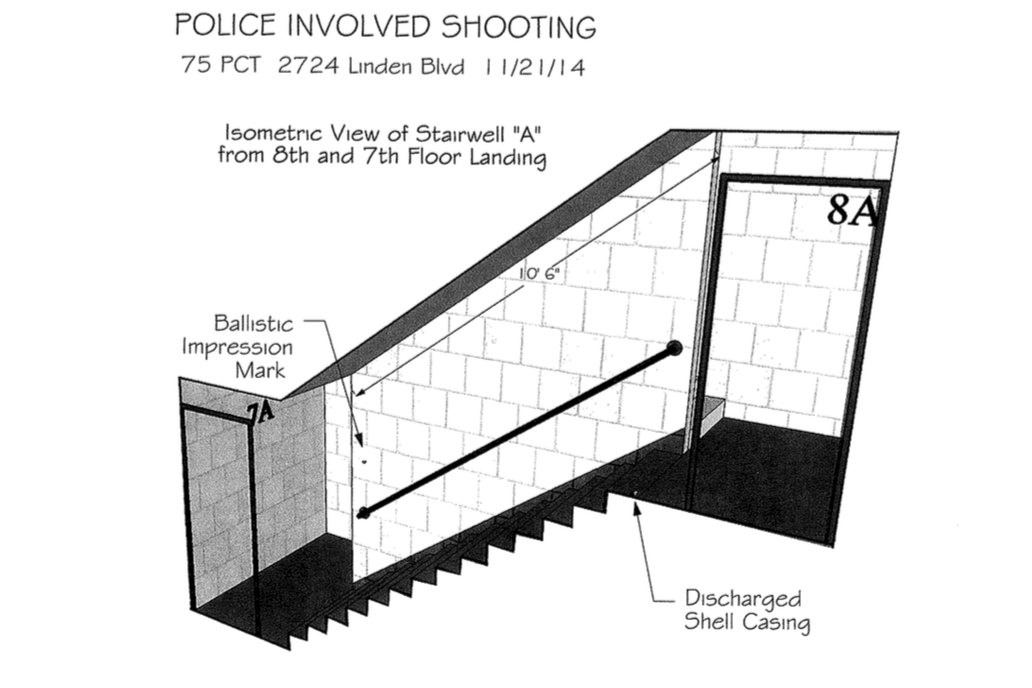 A diagram depicting the view of the stairwell in which Akai Gurley was shot was presented as evidence during Officer Peter Liang's trial. (Photo credit: Brooklyn District Attorney's Office)

► What did the defense say happened?

Liang’s lawyer, Rae Koshetz, built a case around the argument that Liang didn't deliberately fire at Gurley. The officer had his gun out of fear for his own safety, as he conducted a vertical patrol in the most dangerous area of the building, the defense lawyer said.

Defense attorneys said Liang — who was on the force for only two years at the time of the incident — was too upset to aid Gurley after the shooting.

Liang's supervisor testified at a pre-trial hearing that Liang was a nervous wreck after the shooting, struggling to breathe and unsteady on his feet.

The defense has also argued that prosecutors have an “undeniable bias” against the NYPD.

Bratton said officers are taught to use their "discretion" when taking out a firearm because of a real or perceived threat.

"As part of the new [training] policies, [officers are] encouraged as quickly as possible when the threat or perceived threat or the articulable threat is passed to basically return their firearm to the holster," the commissioner said during an unrelated press conference on Jan. 27.

► What did Gurley’s family members say?

Gurley’s girlfriend, Melissa Butler, told DNAinfo immediately after the fatal shooting that she and Gurley had tried to take the elevator instead of the stairs on the night of the incident, but took the stairs when it didn’t come.

“As soon as he came in, the police opened the [door to the] eight-floor staircase,” Butler said.

She tried to revive him with help from emergency dispatchers, and 911 audio released during the trial reveals the aftermath of the shooting, in which Butler can be heard shouting, “He’s not breathing!”

Ballinger previously filed a wrongful death suit against the city.

► What did Liang supporters and family members say?

Some supporters for Liang said that he was made a scapegoat for past frustrations with police use of force, according to reports.

In a notable break from tradition, Liang opted for a trial by jury instead of a bench trial decided by a judge, as is typically the case with NYPD officers involved in shootings.

In addition, the family opted to hire a private lawyer instead of a lawyer retained by the NYPD union, the Patrolmen's Benevolent Association.

► What do we know about Gurley?

Gurley, a Red Hook resident who left behind a young daughter, was planning a surprise Thanksgiving trip to see his mom when he was killed, family said.

"He was a good person. He was into making music and helping people that were struggling. He would give money if you needed it. He'd give you advice," Butler said.

► What do we know about Liang?

Liang, of Bensonhurst, was a rookie officer at the time of the shooting and had been on the job for less than two years.

He was at the Pink Houses that night as part of the NYPD’s response to a recent uptick in violent crime in the development, according to police.

The Pink Houses is located within the NYPD’s 75th Precinct, which has one of highest rates of crime in the borough.

Teens Attacked After Being Lured to Subway Station Via Facebook, NYPD Says

NYPD Officer on Trial for Murder of Unarmed Dad Feared for His Life: Lawyer