KEW GARDENS — The father of slain NYPD Officer Brian Moore said at the arraignment of his son's alleged killer that he wished New York State had the death penalty because "I'd love to pull the switch."

Demetrius Blackwell was arraigned Thursday on a 12-count indictment by a grand jury and District Attorney Richard Brown, with the most serious charge, aggravated murder, holding a mandatory life sentence. The accused ex-con pleaded not guilty.

Retired NYPD Sgt. Raymond Moore and other family members sat in the second row during the hearing, and the grief-stricken father kept his eyes on the accused killer throughout the arraignment.

"I wish New York had the death penalty because I'd love to pull the switch," he told reporters after the hearing, before leaving the Queens courthouse. 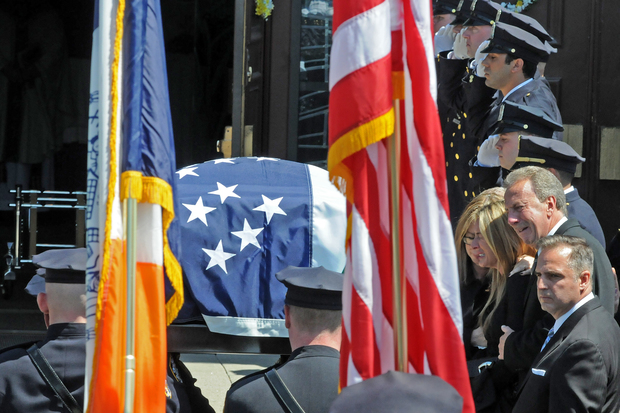 Blackwell's medical records and mental health history would be made public during the trial, after the prosecutors said they would subpoena for his records.

On Thursday, Brown said prosecutors would "vigorously oppose" any insanity plea based on evidence from the May 2 shooting.

Blackwell will continue to be held without bail and is due back in court Sept. 17.

Jamie Taylor, who said he was Blackwell's uncle and was in court to support his nephew, said Blackwell "doesn't think correctly" due to tumors on his brain. He also said there's "no proof" he shot the 25-year-old NYPD officer.

"They don’t have anything to pinpoint that he did this. All they’re saying is that he was in the area," he said.

Blackwell, 35, is accused of shooting at the unmarked car Moore and his partner from the 105th Precinct were driving in Queens Village as they followed the ex-con for a block.