BEDFORD-STUYVESANT — Family and friends mourned a 91-year-old man killed during a home invasion as police charged a suspect in the case on Friday, according to the NYPD.

Waldiman Thompson, 91, was laid to rest on at the Hanson Place Seventh-day Adventist Church, in Fort Greene, a little more than a week after he died during a push-in robbery in which he and his 100-year-old wife, Ethlin Thompson, were trussed while the crooks ransacked their Decatur Street apartment.

In an emotional funeral service, Thompson's children and grandchildren remembered him as a loving family man and resourceful machinist, who built all the equipment for his first wife's hair salon in their native Jamaica, according to his son, Delroy Thompson.

“He really had love, and concern, and compassion for people,” Thompson said.

Thompson died of heart failure in what the Office of the Chief Medical Examiner has deemed a homicide.

Investigators arrested 27-year-old Dwayne Blackwood Friday evening and charged him with murder, assault and burglary in the  attack, the NYPD said. Blackwood was captured on surveillance camera wearing dark clothes and carrying a locked box as he walked away from the scene, police said.

After hours of questioning by police, officers led Blackwood out of the 81st Precinct stationhouse just after 8 p.m., as a small crowd gathered to gawk and some passersby jeered and threatened the suspect.

"You're a punk!" one man shouted repeatedly until his voice went hoarse and an officer restrained him. "We know what you did!" 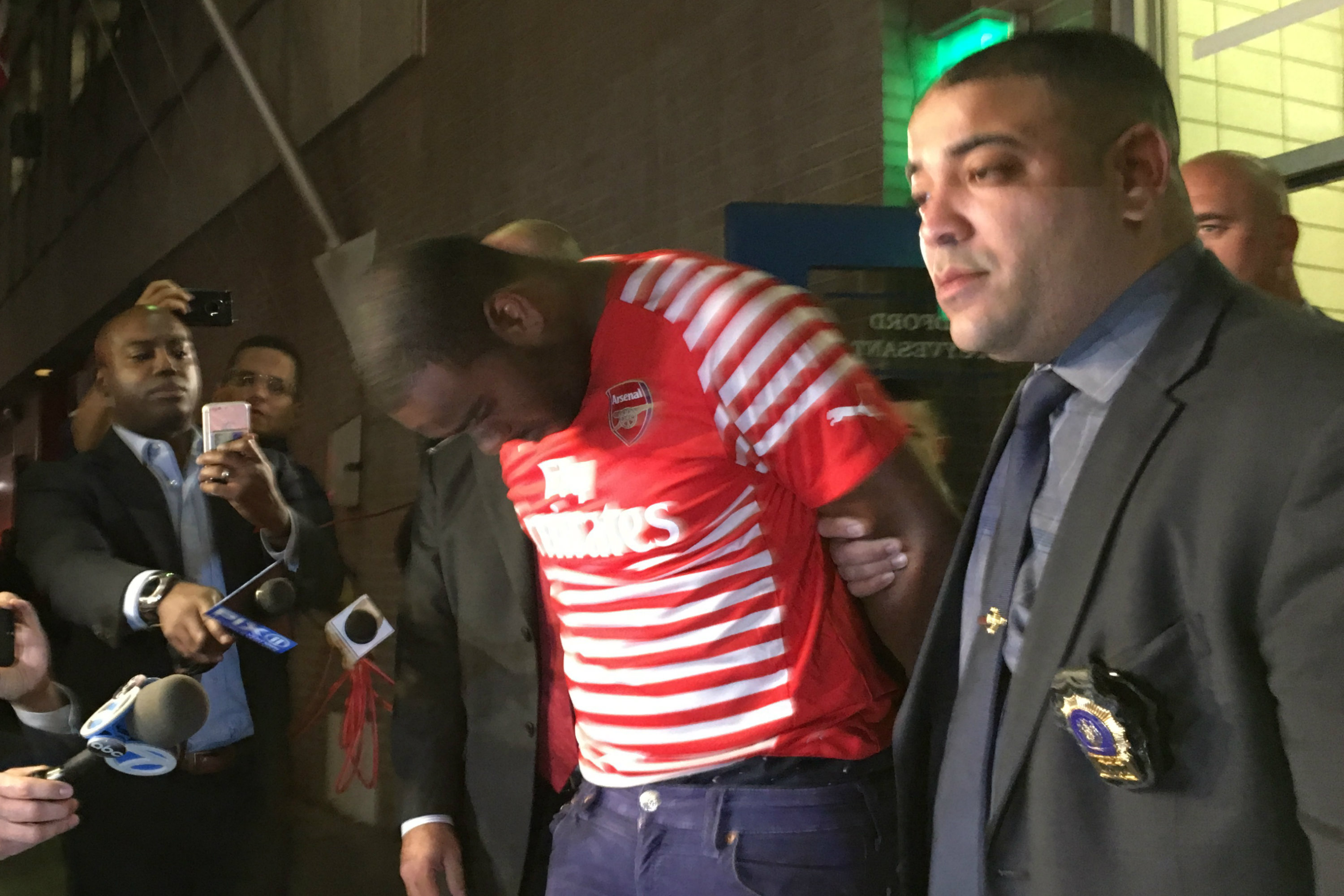 Detectives are still looking for another man suspected in the case.

Ethlin suffered minor injuries in the attack, but was able to escape her ties and alert neighbors, police said. She was held for observation for a day and has been staying with fellow church members since the robbery.

According to relatives and a pastor at her church, the matriarch has already forgiven the men who tied her up, robbed her and took her husband’s life.

“Her faith is very strong. She is firm in her belief in God and even through her trials she continues to be an inspiration to everyone,” said Sean Anderson, an associate pastor at the church.

Sitting in church Friday wearing all black and a round-brimmed black hat, the centenarian widow appeared in fair spirits, laughing at times when speakers joked about her late husband's quirks.

As she was escorted out of the church, she declined to comment on the interrogation of one of the suspects, saying only "God bless" as police walked her to a waiting van, before heading to Cypress Hills Cemetery to lay her husband to rest.

Waldiman Thompson was born in Jamaica in 1926, where he worked as a machinist and raised four children with his first wife, Carmen Thompson, according to relatives. In Jamaica he enjoyed hunting, gardening, boxing, weightlifting and playing cricket and soccer, relatives said.

Thompson had a habit of writing his name on everything he owned, according to Delroy Thompson, and once caught a neighbor red-handed sweeping her porch with a Waldiman Thompson-branded broom, his son said.

“He believed that would deter people from stealing,” Thompson said, to laughter from the audience. “That didn’t happen in this case."

Waldiman and Carmen Thompson eventually moved to Brooklyn, where they lived until Carmen died of an unspecified illness in 1988, according to funeral materials.

A few years later he met Ethlin Pringle, and they were married soon after, relatives said. He leaves behind numerous children, grandchildren, nieces, nephews and extended family.