FLUSHING — U.S. Supreme Court Justice Sonia Sotomayor held court at Queens College on Monday, getting up close with students to discuss how to be personally courageous and care about the world — and how to make legally smart decisions on your work phone.

The judge, born and raised in The Bronx, began her talk on stage at the LeFrak Auditorium, answering questions from the college's president, Felix  V. Matos Rodriguez, about her journey to the Supreme Court.

Asked what she wishes people asked her in these talks, she said it was how she handled her feelings when making decisions.

She later took the floor, walking through the aisles and addressing students face to face as they asked her advice on how to lead, on what she would pursue if she didn't study law, and what's on her bucket list.

As a child, she could never sit still, she said —and even now, as a judge on the country's highest court, she still spends her time in the chambers moving around.

"What lawyers do is help people in their relationships and society," the Princeton University and Yale Law School graduate said.

Her advice to new students at the college was to take classes they may not initially be interested in. Although she knew she wanted to be a lawyer, she took art, economics and religion classes at Princeton, which helped make her a better person.

"Take the classes that you think might scare you," she said. "Have the courage to try different things."

She also hoped students could take a more active role in civics, plugging iCivics, a website she is involved in that helps people learn about government.

"At least be aware of the system that really controls your life," she said, urging students to be proactive.

"You have to care about something within the world. I don't really care about what you do - please do it." 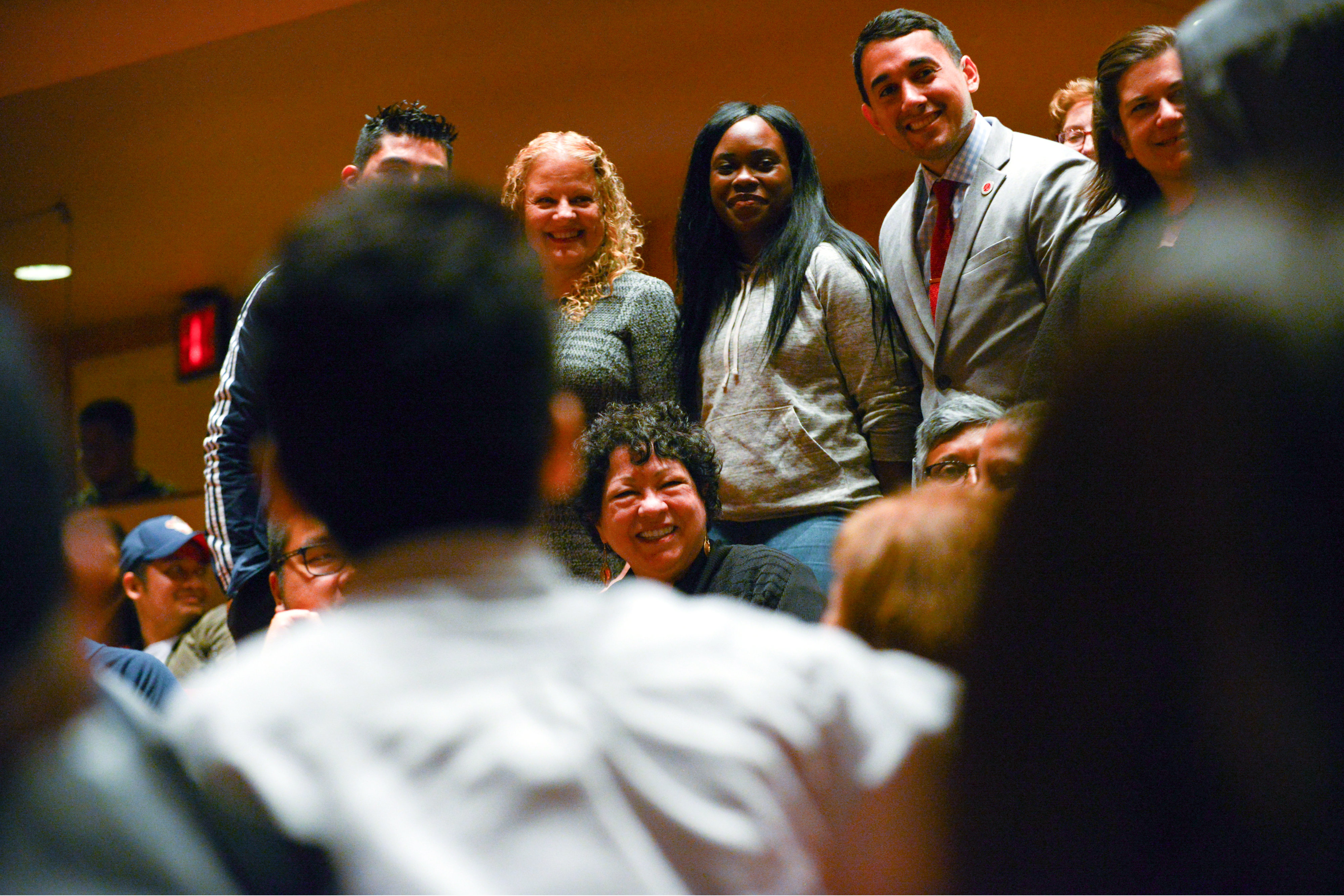 Asked how she separates her personal experiences from her decisions, she said good judges allow their experiences to help inform their decisions for the better.

"Being a judge that makes a decision without appreciating the consequences of his or her decision is just plain blindness," she said. "Our experiences do help to form the richness of our conversations, and help inform our knowledge of what we're doing."

The country's laws also aren't always black and white — which is why the Supreme Court is in place to help interpret it, she said.

"Judging the law, everybody, every human relationship, every human dynamic, brings their problems to the court. We settle everybody's disagreements," she said.

"People have this innate desire to believe that the law is clear. Everybody wants to say, look, why can't the courts come to one answer? Mostly because when you read the law it's not clear."

The Fourth Amendment, for example, prevents unreasonable searches and seizures.

"What does unreasonable mean? What has it meant yesterday when the founders wrote that sentence, and what does it mean today?" she asked.

She then discussed a legal case regarding searching cell phones —United States vs. Jones from 2011 — and reminded the audience that when you're given a work phone, "you consent to having your boss check your phone, with or without probable cause."

"Most people don't know that. And do you know how many people get fired every day?" she said. "You should have a private phone." 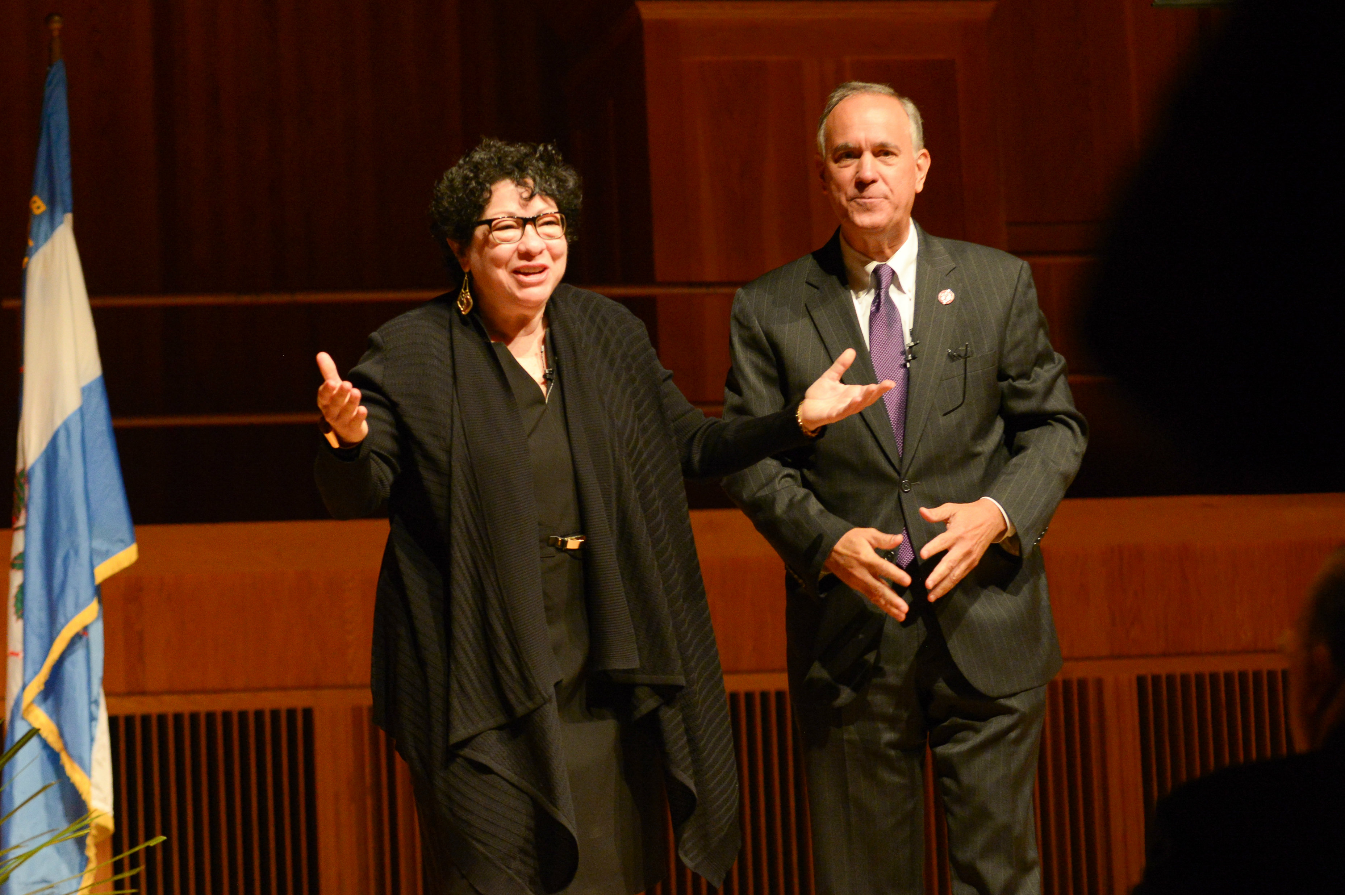 She said she wrote her memoir, "My Beloved World," as a way to remind herself where she came from as she became known around the world.

"The thing I was most afraid of was losing myself to this new world," she said. "Writing the memoir was ensuring in one way that I didn't."

The Nuyorican vowed to talk "no politics" during her visit, but referenced Puerto Rico's slow recovery from Hurricane Maria indirectly, asking one student, who said he was Puerto Rican, if his family was safe.

She later said hoped her memoir could "teach the world about Puerto Rico," where she spent her summers as a kid.

"I didn't do a good enough job," she said solemnly.

Sotomayor was comfortable walking in between the aisles, at one point sitting down in the crowd for a photo. At the end of the event, she took additional questions.

Joseph Hill, 24, a senior at the school who was selected to ask a question, said he was surprised by how warm the justice was.

"She inspired me, in spite of everything I go through and every thing I've been through, to keep going."

Dead Man Found on 5 Train at End of the Line, Police Say

Man Who Raped Sleeping Woman in Bushwick Apt. Turns Himself In, NYPD Says