By Caroline Spivack |&nbspOctober 13, 2017 11:55am | Updated on October 16, 2017 8:34am
@CarolineSpivack
Twitter Facebook Email More
Local leaders rallied for the return of the B71 in Carroll Gardens Friday.
View Full Caption
DNAinfo/Caroline Spivack

PARK SLOPE — A coalition of local leaders are renewing their push to resurrect the cross-town B71 bus route in Brooklyn — this time with an extension connecting Red Hook to the Financial District.

The MTA put the brakes on the service in 2010 amid budget cuts due to its low ridership, but seven years later residents and officials continue to call on the transportation authority to revive the route that once ran through Park Slope, Gowanus, Carroll Gardens, Crown Heights and the Columbia Street Waterfront District.

"That route, while a critical lifeline for a meaningful set of people, was just not a big one and so they cut it. But, boy, here we are years later and there are still people who want their bus back," Councilman Brad Lander said.

The original route — which primarily ran along Union Street and Eastern Parkway between Sterling Place in Crown Heights and down to the Columbia Street Waterfront District — often hit traffic jams on Union Street below Seventh Avenue, as well as on Eastern Parkway.

The amended route proposed by officials would avoid those traffic-clogged arteries and also extend the line to travel farther on both ends, including an extension into the Financial District. And if elected officials have their way, it will only cost straphangers a standard $2.75 fare — not the express bus rate of $6.50, they said. 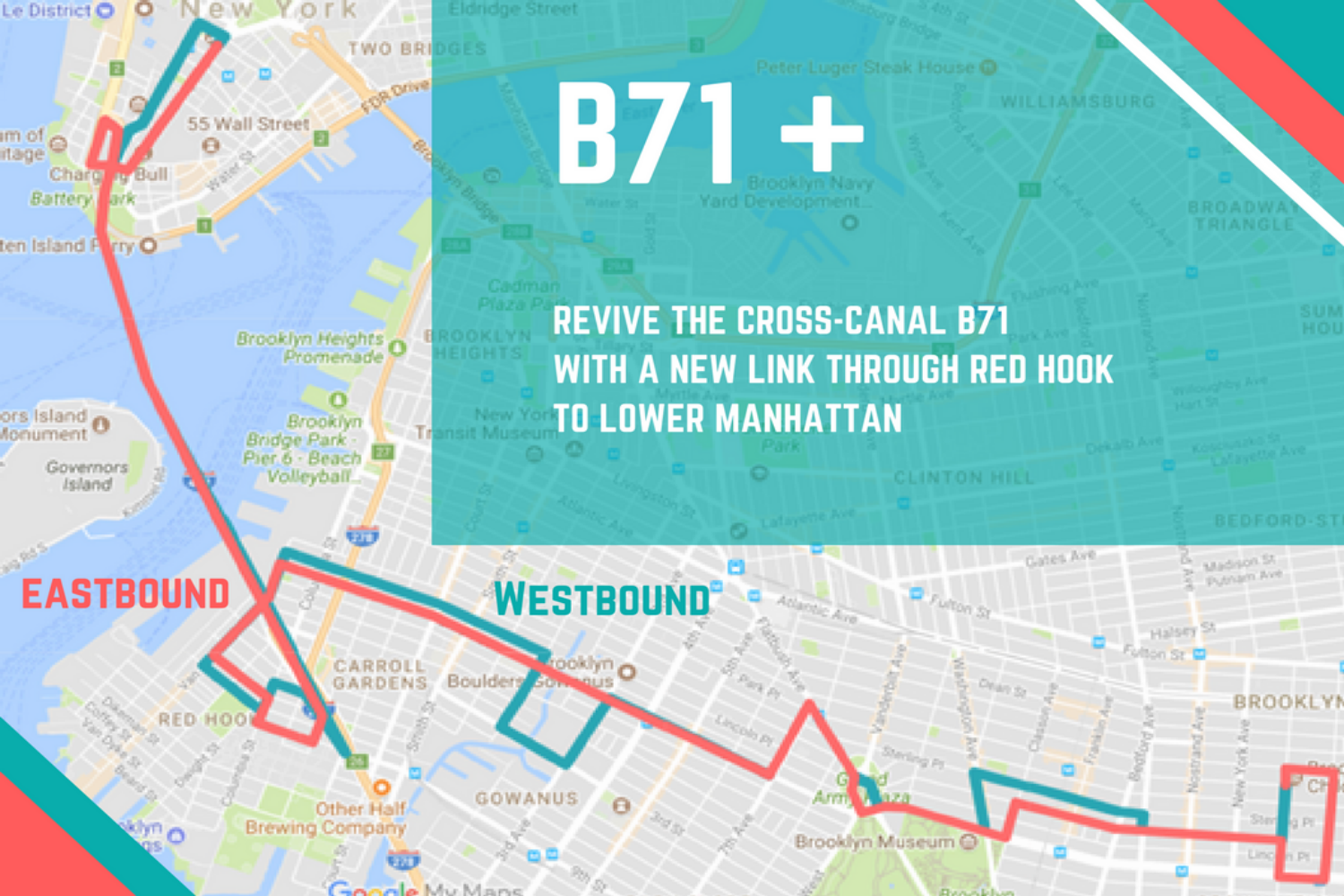 Residents and local leaders renew calls to restore the B71, this time with an added connection from Red Hook to the Financial District. (Councilman Brad Lander's Office)

At a Friday rally in Carroll Gardens that drew more than 50 commuters itching to have their bus back, officials explained that the extension into the northern portion of Red Hook is aimed at boosting transit in that neighborhood, whose current options include two bus routes and an NYC Ferry stop, but no subway stations.

In fact, Lander said the MTA initially proposed a Red Hook expansion to the B71 in 2006, but the line was cut before it could be extended. The MTA did not respond to questions about the Red Hook extension.

The neighborhood also boasts a ferry stop at the Clinton Wharf near Ferris Street, which launched as part of the service's South Brooklyn route. NYC Ferry did not return requests for ridership data.

"It is wonderful that there is a new ferry stop but that does not help residents of the Union Street corridor and all the residents [of these other neighborhoods]," added Lander at the Friday press conference.

The loss of the line was a particular blow for residents of the Eileen Dugan Senior Center in Carroll Gardens who relied on the bus, according to the the site's director Carol Reid-Rembert.

Several cultural institutions along the route have also come forward in support of the restoration, including the Brooklyn Public Library, the Brooklyn Children's Museum and the Prospect Park Alliance.

"For all of us, this is really about cultural access," said Stephanie Wilchfort of the Brooklyn Children's Museum, speaking on behalf of the alliance of groups. "We can only live up to the honor and obligation of that [Brooklyn] name if our institutions are accessible to all Brooklynites."

Restoring the B71 is not a pipe dream, as other lines have been revived in recent years.

Straphangers successfully petitioned the MTA in 2014 to bring back the B37 line, which travels from Bay Ridge to the Barclays Center, after it was slashed during budget cuts in 2010.

As of Friday morning, more than 1,300 people signed Councilman Lander's petition to bring the bus back. An alliance of community groups and elected officials have joined the push, including Councilmembers Carlos Mencahca, Stephen Levin, Laurie Cumbo and Assemblywoman Jo Anne Simon.

The MTA did not return requests for comment about whether the agency would consider reviving the service, but in the past it has not embraced the idea.