J'Ouvert Security Will Be Like New Year's Eve in Times Square, Mayor Says

PROSPECT HEIGHTS — After years of deadly violence at J'Ouvert, the pre-dawn precursor to the West Indian Day Parade, security is going to be so tight at the event that it will look like New Year’s Eve in Times Square, the mayor and police officials said Monday.

The NYPD is planning to create a “frozen zone” on the official J’Ouvert parade route in Crown Heights this Labor Day, according to Chief of Patrol Terry Monahan, with plans to search every participant for weapons, alcohol and large bags at a dozen checkpoints along Empire Boulevard and Nostrand Avenue.

The security measures will be similar to what happens in Times Square on New Year’s Eve, according to Mayor Bill de Blasio, who announced the changes with NYPD leaders on Monday at Grand Army Plaza, where the J’Ouvert parade kicks off.

“Picture what happens on New Year’s Eve at Times Square," he said. "If you go into those areas, those closed-off areas, you’re staying there. You are not bringing big bags. You’re certainly not bringing anything that could be a danger to anyone else. You’re not bringing alcohol. It’s a very controlled environment."

The announcement follows an already major change to the traditional pre-dawn event, which this year will start during the daylight hours, at 6 a.m., rather than its former 4 a.m start time. 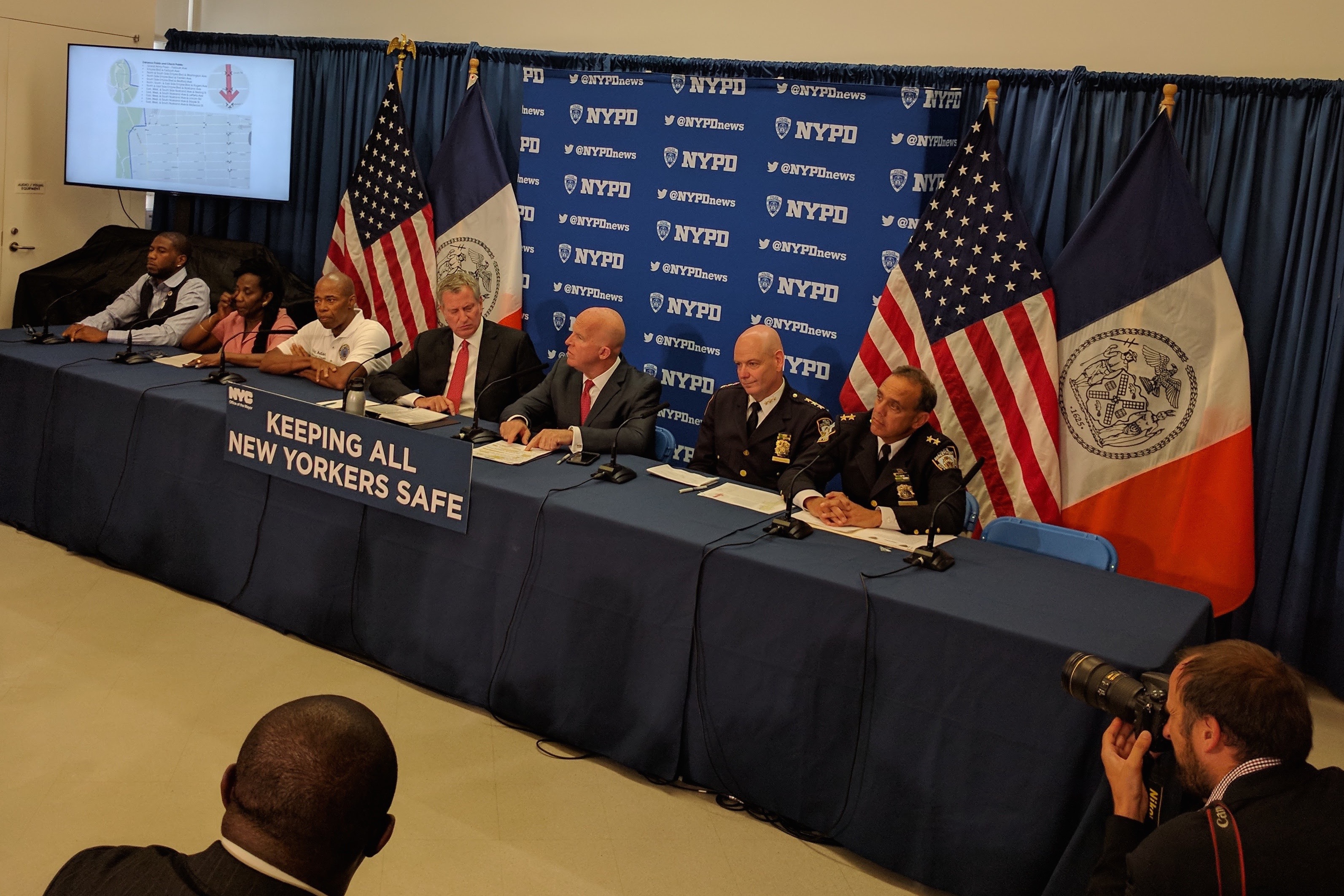 The changes come after fatal shootings marred the celebratory, party-like atmosphere of J'Ouvert, whose name means “day break” and which typically kicks off Caribbean carnival in Brooklyn. Its leads directly into the West Indian Day Parade, which takes place later in the day on Eastern Parkway.

Last year, two young people —17-year-old Tyreke Borel and 22-year-old Tiarah Poyau — were killed on the parade route. In 2015, an aide to Gov. Andrew Cuomo, Carey Gabay, 43, was killed in a gang-related shooting near the parade while celebrating The year before that, 55-year-old Michael Sampson was shot in the chest and killed during the celebration.

After last year’s double shooting, some called for the event to be canceled. Since then, the community has worked with the NYPD and city officials to find a way to make the event safer rather than shutting it down completely, local leaders at Monday’s event said.

In addition to changing the parade's start time and upping security with the checkpoints, the NYPD is planning to add more officers to the route, add 30 percent more light towers, and work with local anti-violence groups to monitor the event and diffuse tension or disputes as they arise.

“No effort to incite violence will be tolerated. Illegal activity will not be tolerated. NYPD will be out in force with a zero-tolerance attitude toward anything that will endanger other people,” the mayor said.

The J’Ouvert parade is planned for 6 a.m. on September 4, starting at Grand Army Plaza and traveling south on Flatbush Avenue, east on Empire Boulevard and then south on Nostrand Avenue to Midwood Street.