BED-STUY — Bushwick City Farm — a six-year-old urban garden that's home to 50 ducks and chickens and provides free food to the community — is getting the boot from its current plot, with the landlord giving it to the end of the month to clear out.

The inner-city homesteaders are now asking folks who care about the farm at 354 Stockton St. to sign an online petition in support of it, while also calling on elected officials to try to help either save the current location or help find a new one.

Landlord Faramarz Roshodesh sen at letter in early August telling the farm it had less than a month to vacate.

"I can’t think of how we could move out in August, just the logistics of getting out of this space," said Laurel Leckert, 35, one of dozens of volunteers at the famr who's been involved since 2012.

"It’s the middle of the growing season. We are a functional farm. We grow tons of fruits and vegetables. We have ducks, chickens, a turkey. We just hatched a bunch of ducklings. They’re adorable. We also just built an aquaponic system where we’re growing fish," she explained. 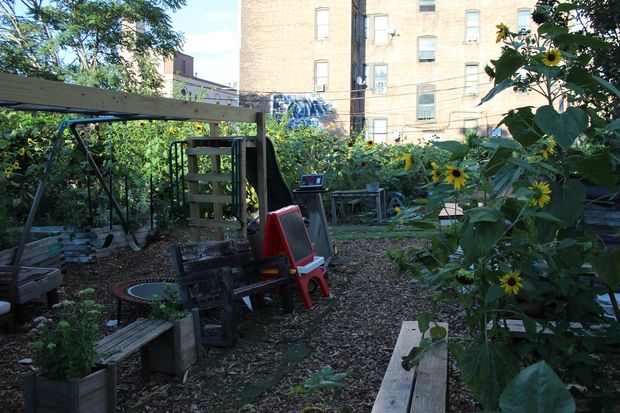 This is not not the first time Bushwick City Farm has had to scramble for space. It was also asked to leave its first location on Broadway near Arion Place in the mid-2000s because the landlord wanted to develop the property.

James Telfer, 39, who has been volunteering at the farm for six years, worried that even if it does pack up and leave, the Stockton Street lot could sit empty for years like what happened at their former location.

"It was nice of them to let us use it when they did, but if it's going to be empty for years afterward, we could have been growing free food for people in that time period," he said.

Urban farms and community gardens all across the city have faced eviction, demolition and destruction as land prices continue to soar and property owners look to cash in on the city's construction boom.

Nearby on Broadway at Linden Street, a 36-year-old community garden was razed in June to make way for new construction. And volunteers at the Eldert Street Community Garden have been fighting the landlord of their property in a drawn-out legal battle for the right to stay put.

The Bushwick City Farm not only acts as a play area for kids and a village green for the neighborhood, but about 15 families get fresh eggs from the farm each week, volunteers said.

At the very least, volunteers are hoping the landlord will give them more time to plan their next move.

"We just haven't had enough time to put together any alternative or storage spaces or even a game plan to move so much stuff," Telfer said. "It's sad to lose this lot, but it'd be tragic to lose everything to a bulldozer."

An attorney for Roshodesh didn't return a request for comment.