Twitter Facebook Email More
Nazir "Stinky" Saunders, left, and Anthony Alexander are accused of of pulling the trigger in a deadly shooting that took the lives of two young moms in July.
View Full Caption
NYPD

Nazir “Stinky” Saunders, 20, and Anthony Alexander, 18, fired the fatal shots that killed Chynna Battle, 21, and Shaqwanda “Q” Staley, 29, during a barbecue at an apartment complex on Gates Avenue on July 12, according to NYPD Chief of Detectives Robert Boyce.

Battle and Staley were hanging out with a group of people inside the courtyard of 760 Gates Ave., part of the Stuyvesant Gardens complex, when Saunders, Alexander, and several other men walked up to the party and the two men opened fire, Boyce said.

“They went back there, and we believe Mr. Saunders had a .45 caliber handgun he fired six times,” Boyce said at a press conference Wednesday. “Mr. Alexander has a .380 caliber. He fired twice. These bullets hit these two young ladies.”

Battle's cousin, Lynette Battle, said she was looking forward to facing down her cousin's accused killers.

"I'm glad they've been identified but now I want them arrested," Battle said. "I want them under the jail. My family will not be happy until justice is served, and we will be at every court hearing and they will see our faces." 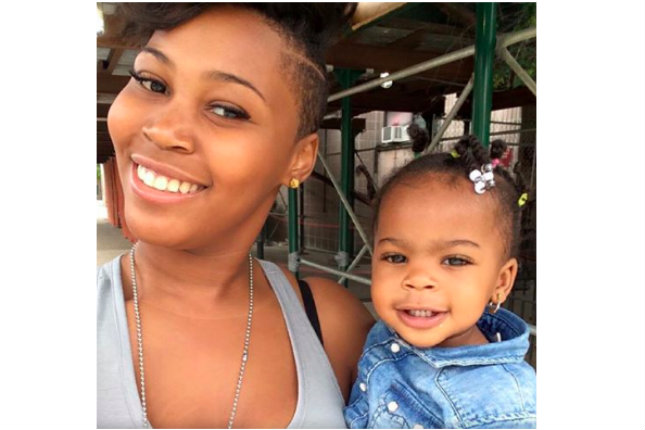 Saunders and Alexander, both of whom live in the Roosevelt Houses on Pulaski Street between Marcus Garvey Boulevard and Stuyvesant Avenue, were aiming for someone else in the crowd, an attack that investigators believe may been attempted retaliation for another shooting in May, Boyce said.

“What he was shooting at was someone sitting with them,” Boyce said. “We’ve identified these individuals. We’re now looking to identify two others they were with.”

Saunders' distinctive nickname came up during police questioning within hours of the shooting, and detectives used surveillance cameras and tips from neighbors to piece together who the shooters were, Boyce said.

“A nickname emerged almost that night, one male named ‘Stinky.’ ‘Stinky’ was Nazir Saunders, most people knew him in the neighborhood,” Boyce said. “We went with that, and that’s how we were able to identify Anthony Alexander.”

The case was then cobbled together thanks to surveillance footage nearby and tips from neighbors, according to Boyce.

Battle, who lived around the corner from the shooting, left behind a 3-year-old daughter, while Staley left behind a 9-year-old girl. The shooting of two young women uninvolved in the dispute shocked neighbors. At Battles' funeral July 21, family members and community leaders forcefully called for anyone with information to come forward.

“I’m mad as hell right now,” said Tony Herbert, a community activist. “You got a responsibility. You can cry your crocodile tears, but when it’s all said and done, somebody gotta step up and say ‘I know who did this.’ Because if you remain silent, you’re just as guilty as the person who pulled the trigger.”

No arrests had been made as of Wednesday afternoon, police said.