EAST FLATBUSH — The officer who fatally shot a knife-wielding man Monday was the only one of four responding officers who had not been trained to handle calls for emotionally disturbed people — even though he had shot another man in a similar situation less than a year earlier, police said.

The officers followed her and had reached the living room area when Jeune barreled out from the rear of the apartment with a large bread knife, prompting one officer to shock him with his Taser, police said.

Unfazed, Jeune knocked that officer to the ground and straddled him with the blade in hand before Officer Miguel Gonzalez fired five rounds at him, police said.

At least one bullet missed Jeune, tearing through the wall and blasting into the apartment next door, hitting a seltzer bottle on the kitchen table, according to tenant Charmaine Goodin, whose 14-year-old daughter was in the apartment at the time of the shooting. 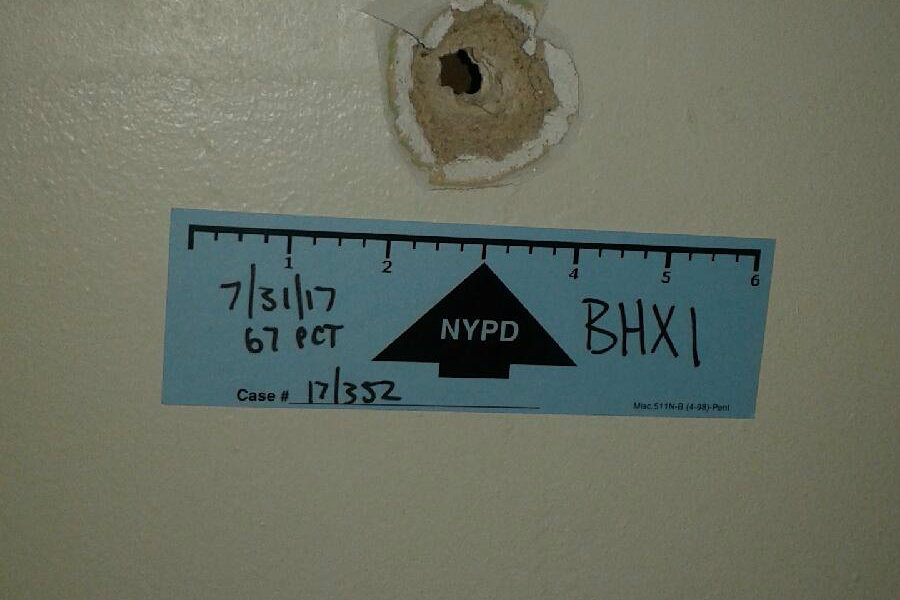 A bullet hole was left in an adjoining apartment's wall after police fired at Jeune. Charmaine Goodin

"It's so scary," Goodin said. "I don't think they had to fire that many rounds."

Beverly Wright, a neighbor down the hall, was inside her own apartment at the time of the shooting.

"I heard gunshots and I said, 'Oh Lord, someone got shot,' but I didn't look outside," said Beverley Wright, who lives across the hall.

Tuesday afternoon, a day after the shooting, blood was still smeared across the floor outside the family's apartment, and a large pool of blood could be seen inside the living room. 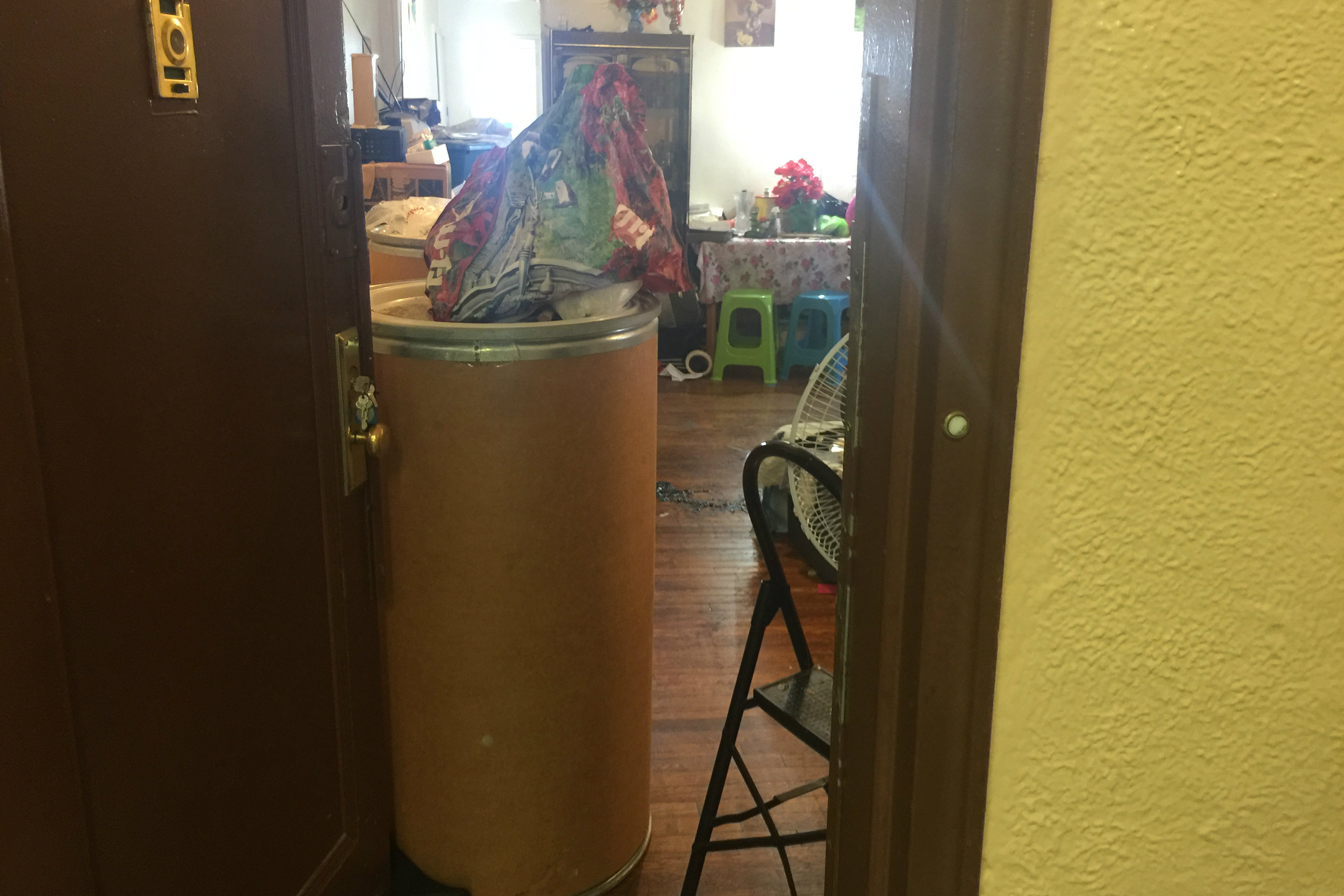 Jeune, who became an American citizen about two years ago after emigrating from Guyana, was pronounced dead at the scene, police said.

More than half a dozen neighbors who spoke with DNAinfo said they were shocked to hear the accusation that Jeune had rushed officers with a knife. Neighbors on his floor described Jeune as a quiet young man who kept to himself and often helped his mom with carrying groceries, and as a music lover who could often be found dancing in front of a mirror in the hallway.

He came across as a bit of an oddball, talking to himself and sometimes stomping when he walked, according to Regina Blain, 22. But he was also quick to smile, and everyone who spoke with DNAinfo on Monday and Tuesday said they never saw him as threatening.

"He was quiet, but he was never violent, never violent," Wright said. "I never saw him with a friend, he was always with his parents."

Paulette James, another neighbor on Jeune's floor and a tenant leader, said she was at work when she found out about the shooting, and couldn't believe Jeune would act out violently.

"I know he's not a child to be doing anything out of order," she said. "Oh God, I couldn't take it."

Gonzalez was the only officer responding to the Jeune household who didn't have crisis intervention training, or CIT, according to the NYPD's Chief of Patrol, Terrance Monahan.

As of December, only about 13 percent of the NYPD — or 4,700 officers — received the training, according to the Department of Investigation, which has blasted the department for dragging its feet on the issue.

Jeune's family faulted the police officer's use of deadly force.

"Any parent can say, 'You only call the cops because you expect them to come and de-escalate the situation, not make it worse. It shouldn't have gotten to that stage where someone has to lose their life," said Jeune's cousin Devon Luke, 35, a nursing student.

"They have to do their due diligence now and look into the matter. Is it a coincidence that this officer has been involved in two shootings, or is it something else?" Luke added.

On Oct. 26, 2016, Gonzalez shot and wounded Davonte Pressley, who'd lunged at him with a steak knife, also in East Flatbush, prosecutors and NYPD officials said.

Pressley, who was 23 at the time and suffered from bipolar disorder, came at Gonzalez with the blade, despite orders to drop the weapon, police said at the time.

Pressley had called police himself, saying that he had a gun and a knife, officials said. In that incident, police weren't told Pressley was an emotionally disturbed person, they said. 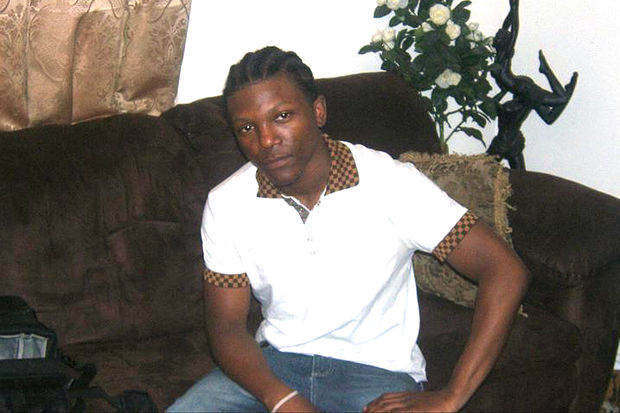 Davonte Pressley was shot three times in the torso after lunging at police with a knife, officials said. His mother said he suffers from bipolar disorder. (Facebook/paulette.pressley.5)

He was charged with attempted assault on a police officer officer, records show. He's being held on Rikers Island and is due back in court Aug. 24, records show.

His mother, Paulette Pressley, criticized Gonzalez at the time for shooting her son instead of de-escalating the encounter.

"It doesn’t take 20 police officers to take one person,” she said. “It doesn’t make any sense.”

NYPD investigators are still formally reviewing the Pressley shooting, but said Tuesday that Gonzalez appeared to be in the right.

"We see that shooting as within guidelines," O'Neill said Tuesday.

"It's a pretty extensive training program. We'd like to move faster, but there's a lot of other training we do," the commissioner added.

Councilman Jumaane Williams extended his condolences to Jeune's family and said his office was also investigating the shooting.

"It is nonetheless concerning that a man died following what was supposed to be a call to protect life," Williams said.

"We have now seen too many deaths with the same description. Until we get further information, I ask that we continue to keep our prayers with the family," he added.