MANHATTAN — Nearly 60,000 shells of colorful explosives will be blasted into the sky Tuesday evening for the 41st Annual Macy’s Fourth of July Fireworks show, as fireworks fans line up along the waterfront and in high-rises facing the East River.

This year the show will take place along a more concentrated stretch of the East River between 24th Street and the Queens Midtown Tunnel, compared to last year which stretched from the South Street Seaport to Midtown.

The pyrotechnic display will start at 9:25 p.m. and last about 25 minutes.

Manhattan residents can get some of the best views at the East River Park and along FDR drive between 18th Street and 34th Street. Macy's advises people to get to their locations early, as some access points along FDR may be closed due to crowding.

The company also asks viewers to leave their blankets and chairs at home so everyone has a chance to view the show comfortably. 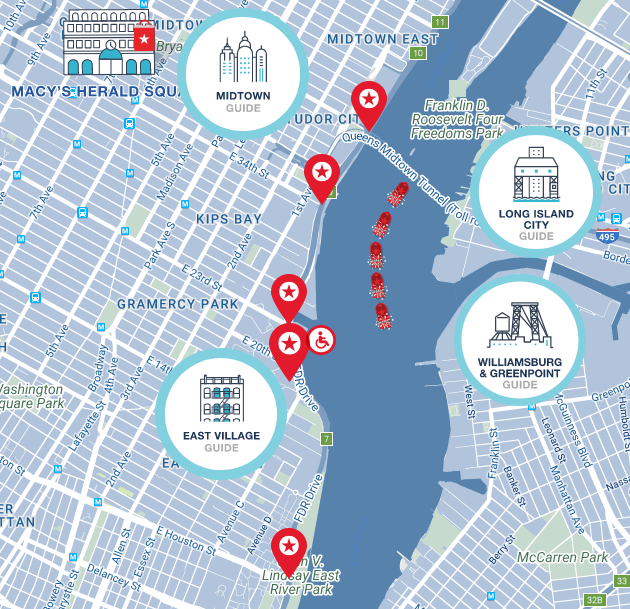 If you don’t want to make the journey into Manhattan there are plenty of waterfront spots in Brooklyn and Queens with amazing cityscape views.

The concrete park contrasts with the sleek luxury high rises creeping up around it, but it’s a park with an amazing waterfront view. There’s plenty of room for families to spread out with picnics, and enjoy the evening show. Pets and bikes are not allowed in the park, so be sure to leave your pup at home.

This park is a bit further away from the action, but it’s a great place for people looking to avoid crowds and long commutes.

This waterfront park is a bit smaller than the other ones listed, however it’s much closer to the pyrotechnics show. The playground and water park will be open until dusk on Tuesday.

For Brooklynites looking for an affordable rooftop venue, check out Berry Park on the Northwest side of McCarren Park. The rooftop bar has a $20 cover charge and will feature a live DJ and drink specials all night.

Queens residents who don’t care for the deafening booms of pyrotechnics can enjoy the show a bit further north at this location. Hunters Point South Park will be closed to viewers as it acts as the official command center for the event.