By Rachel Holliday Smith |&nbspJune 14, 2017 9:46am
@rachelholliday
Twitter Facebook Email More
An aerial view of the new armory plan shows the new 13-story rental building to be constructed on the property's east side and the domed drill hall space that will become a recreation center open to the community.
View Full Caption
Bedford Courts LLC

CROWN HEIGHTS — The official approval process for the controversial redevelopment of the Bedford-Union Armory got off to a rough start Tuesday night as a Crown Heights community board committee indicated it will not support the plan.

Amid loud protests from activists, members of Brooklyn Community Board 9’s land use committee said they can’t vote in favor of the plan by developers BFC Partners to turn the city-owned former military building into a recreation center with market-rate and affordable apartments and 56 high-end condominiums.

At a meeting Tuesday that officially began the city’s Uniform Land Use Review Procedure (ULURP) — the monthslong process required to consider the 542,000-square-foot redevelopment — the committee heard a presentation about the project from BFC but was not swayed to support it.

“This committee has made it clear that we weren’t interested in approving this project in its current form. That includes having condos on public land… given that that’s the case, when are we going to see a presentation that reacts to that?” asked Michael Liburd, chair of the CB9 committee. “Because this is the same information we’ve had all along.”

The group’s stance does not bode well for BFC, which needs input and support from the board, the borough president, the City Council and ultimately the mayor before it can begin construction.

Local City Councilmember Laurie Cumbo recently said she will not vote in favor of the redevelopment in its current form — reiterating her stance Tuesday, amid shouts and jeers from activists who frequently interrupted the meeting with chants of, “Kill the deal for real!” 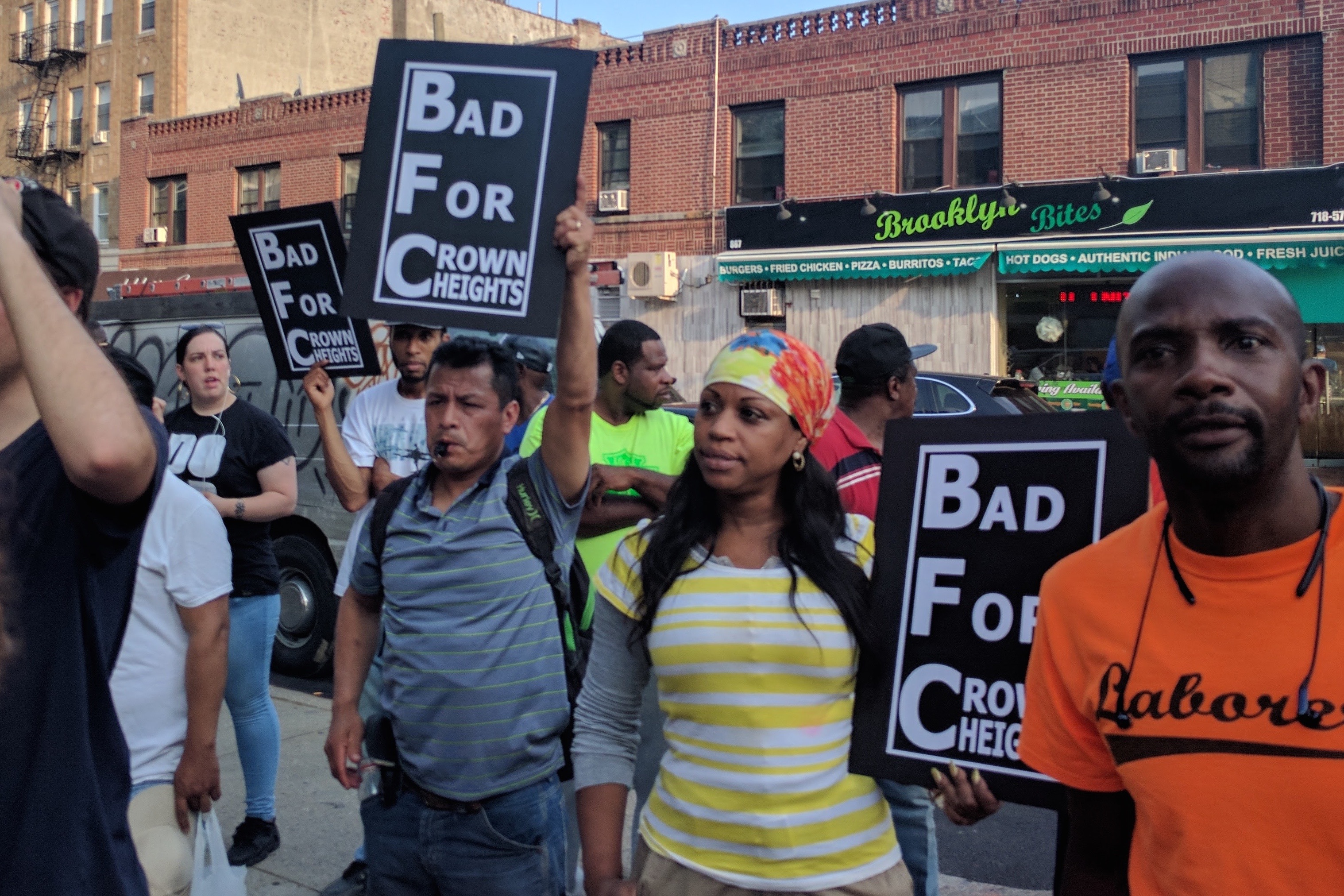 Protesters rally outside Tuesday night's CB9 meeting on the Bedford-Union Armory. Activists continually interrupted the meeting with shouts and jeers, calling for the project to be scrapped. (Photo credit: DNAinfo/Rachel Holliday Smith)

“You cannot come before Community Board 9 with the same project that you announced three years ago,” Cumbo said, speaking to a standing-room-only audience that included representatives of BFC and the city's Economic Development Corporation. “It’s unacceptable, it’s bad for the community. It does not reflect the needs of this community.”

A vote from the full CB9 board will take place at the end of the month after a public hearing on the matter, scheduled for Monday at M.S. 61 at 6:30 p.m.

It’s unlikely the controversial plan will get approval from the board unless the condominiums are removed from the plan and more affordable housing is added — both issues that multiple committee members raised as sticking points.

Cumbo indicated Mayor Bill de Blasio believes a better deal on the armory with more affordable housing will come out of ongoing negotiations with BFC before the end of the ULURP process, which takes months to complete.

“He believes that, somehow, he’s going to make this project better,” she said.

A representative of BFC, John Valladares, echoed that point, particularly on the housing issue.

“We think that through the ULURP process … the affordability levels are going to improve to better meet the needs, and there’s no reason to go back to the drawing board,” he said.

The mayor's office would not answer questions about the armory negotiations, referring questions to the EDC. A spokesman for the agency, Anthony Hogrebe, would not comment on specifics of the project or what, if anything, may change with housing on the site.

"We are committed to delivering a long-awaited community recreational center and badly needed affordable housing for the Crown Heights community. We continue having conversations with all stakeholders and will look for ways to make this great project even better," he said in a statement.

The Bedford-Union Armory redevelopment has been in the works for years and has been beset by controversy since the EDC unveiled BFC's plan in late 2015.

One of the building’s developers, Slate Property Group, and its celebrity endorser, Knicks star Carmelo Anthony, dropped out of the project amid significant pressure from activists. For months, local elected officials have pushed for 100 percent affordable housing at the armory while activists have consistently urged the city to kill the deal completely.

Those interested in speaking at Monday’s public hearing on the armory project are encouraged to call CB9 at (718) 778-9279 or email at bk09@cb.nyc.gov to RSVP.