THE BRONX — The family of a 60-year-old woman left on life support after a motorcyclist struck her under the Bruckner Expressway service road and fled the scene Sunday was struggling for answers Thursday as they prepared to remove her respirator — while her killer remains at large.

Rosa Ramirez, 60, was in the crosswalk at Hunts Point Avenue and the service road when a biker on a red Suzuki sped into her, stopped momentarily to look at her before speeding off about 9:30 p.m., according to police and her daughter, Roxanna Ramirez.

"I've told everyone this: my mother was literally an angel living on this earth," the grief-stricken daughter said Thursday.

Her daughter choked back tears as she prepared to take Ramirez off life support at Lincoln Hospital Thursday.

"We didn't want to continue her suffering," said her daughter, adding that the family plans to donate Ramirez's organs.

Ramirez's family spent the night of the crash into the next day desperately searching for the missing woman, and her daughter was sitting in an NYPD patrol car with three officers scouring the South Bronx looking for Ramirez when a social worker with the hospital called her cellphone, she said.

The worker said they had a woman there identified only as Jane Doe who had her as a contact in a cellphone in a pink case, according to Ramirez.

"As soon as she said that, my heart dropped. In a way, I felt relief because I finally found my mother, but in a way, I was scared because what was she doing in a hospital?" the younger Ramirez said.

The daughter raced to the hospital, where she found  "my mother lying in that bed attached to all those tubes," Ramirez said. "I immediately fainted."

When she came to, doctors explained the extent of Ramirez' injuries.

"Her right leg was broken, but it was nothing that couldn't be fixed with a simple cast. Her head injury was very very critical," the daughter said.

At first, Ramirez responded to stimuli like blinking her eyes when hospital staff gave her eye drops, but her condition deteriorated in the days that followed, leaving her brain dead.

On Tuesday, doctors conducted an apnea test, a mandatory procedure to determine brain death, shortly before 3:20 p.m., the younger Ramirez said. She stood behind her father when it was concluded but couldn't really see or hear the doctors, she said.

Immediately, her father turned to her with tears in his eyes and grabbed her, she said.

"I thought they were tears of joy because she had passed [the test]," Ramirez said. "I said, 'I told you she was strong. You see, she passed with strength,'"

She then noticed every other relative in the room weeping. Confused, she asked a cousin why they were crying and only then did she realize that her mother was officially brain dead.

"I couldn't take it and I just fainted," Ramirez said. 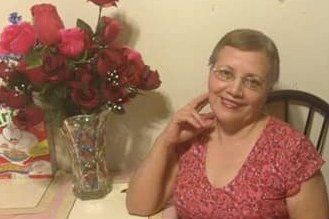 The older Ramirez had four children in Guatemala, three girls and a boy, raising them mostly by herself after their father was murdered, her daughter said.

She eventually moved to New York so that she could work and send money back to them, her daughter said.

Here, she gave birth to Roxanna, and she was still here when her only son died in Guatemala at the age of 9, her daughter said.

"Imagine how much harder it was for her when my brother passed away and she couldn't even be there for him," the daughter said.

"She went through so much in life, but she never lost her nerve," she added.

Later in life, Ramirez became a stay-at-home mom, caring for the many children in her building, endearing herself to her many neighbors, her daughter said.

"She was so kind to everyone. No matter how mean or hurtful people were to her, she always, always, showed them kindness. She had so many friends. Friends I didn't know she had have been coming up to me saying sorry about what happened. They were in tears," her daughter said.

There had been no arrests as of Thursday afternoon, police said.

Investigators told Ramirez's family that witnesses told them the biker had been speeding before hitting her, stopped to look and then sped away. But they knew little else about the incident, they said.

"The detectives could only tell us what they knew in that moment and it wasn't that much information," her daughter said.

"They did manage to tell me there were many witnesses that ran to my mother's side and called for help immediately," she added.

Still, it wasn't immediately clear who the motorcyclist was or why they were speeding.

Ramirez's daughter speculated that the biker may have been leaving a common biker gathering spot at Barretto Point Park. An NYPD spokesman, however, couldn't confirm that.

Regardless, the intersection is treacherous for pedestrians, with 59 pedestrians being hit there since 2009, according to city data.

In 2013 alone, 15 pedestrians were hit there, data shows. Injuries have steadily dropped since then as the city designated it a Vision Zero priority.