By Rachel Holliday Smith |&nbspApril 6, 2017 3:18pm
@rachelholliday
Twitter Facebook Email More
The program will launched with the plan that it would be financed entirely by Citibank and Mastercard.
View Full Caption
DNAinfo/Jill Colvin

CROWN HEIGHTS — Citi Bike has a first draft of where new docking stations will go in southern Crown Heights and Prospect-Lefferts Gardens.

The Department of Transportation presented a preliminary plan for the bike share system’s expansion in the neighborhood to Brooklyn Community Board 9 on Wednesday night, giving the group a glimpse of where the blue bikes will be docked.

A total of 10 Citi Bike docking stations are in the draft plan for CB9, stretching from Eastern Parkway to Lefferts Avenue and between Prospect Park and Rogers Avenue to the east, the map shows. 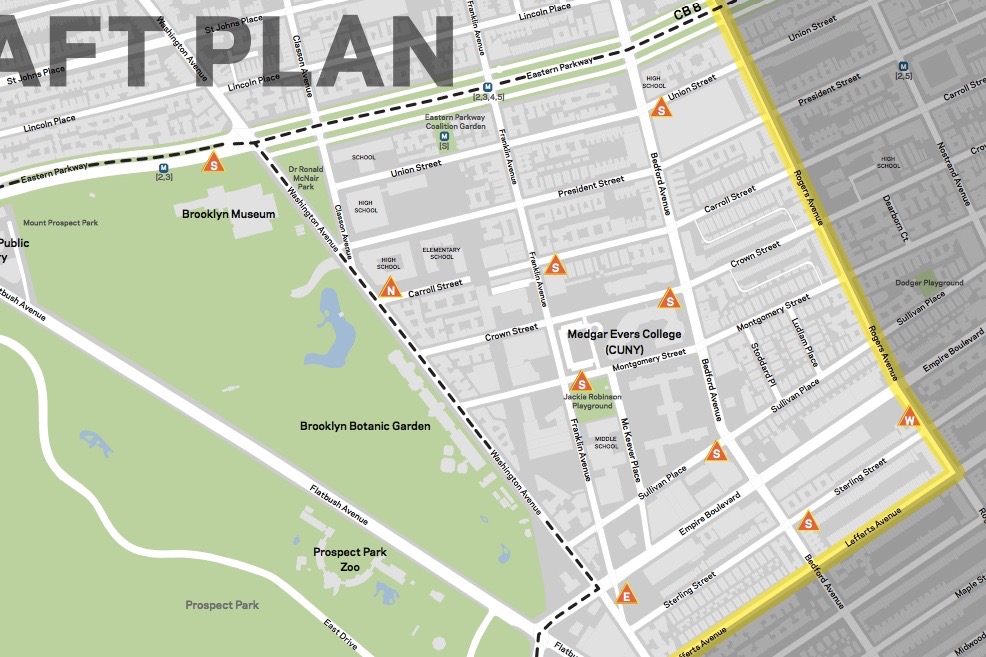 An image from the Department of Transportation's draft plan for Citi Bike stations in Brooklyn Community Board 9 shows 10 proposed locations for the bike share system (shown as orange triangles), which is expanding in Prospect Heights, Crown Heights and Prospect-Lefferts Gardens. (Image credit: NYC DOT)

The draft is one of two to be presented to the community as part of the Brooklyn expansion of Citi Bike. The other, in Brooklyn Community Board 8 — which covers Prospect Heights and Crown Heights north of Eastern Parkway — will be presented on April 25 at the board’s transportation committee meeting.

The plan is the result of input gathered at DOT workshops in the fall where residents suggested locations for the docking stations. The agency said the draft plans will be presented to each community board for more input in order to create a finalized map.

A spokeswoman for DOT said the agency will release the final plan for CB9 in the late spring or early summer. Installation of the docking stations is slated for late summer of this year.