By Rachel Holliday Smith |&nbspMarch 29, 2017 4:12pm
@rachelholliday
Twitter Facebook Email More
An image from the Department of Transportation's presentation on an extension of the Franklin Avenue bike lane shows a cyclist using the roadway in its current configuration.
View Full Caption
NYC DOT

CROWN HEIGHTS — A planned extension of the Franklin Avenue bike lane south of Eastern Parkway was effectively nixed after Community Board 9 dropped the ball on the vote, members said.

The Department of Transportation was scheduled to present the plan for a new bike lane on the avenue between Eastern Parkway and Empire Boulevard at a Brooklyn Community Board 9 meeting on Tuesday night, the board’s agenda said.

But the agency didn’t come and the board didn’t vote on the plan Tuesday because of a procedural issue, according to CB9’s Transportation Committee chair, Fred Baptise.

His committee had voted in favor of the bike lane on March 8 — but because they were one short of the 11-member quorum present for that vote it was null, he said.

“A vote was taken and the recommendation was made at that time for the proposal to go forward and be presented to the full board with the DOT presenting this evening,” he said, but “we only had 10 members present.”

“We cannot present an actual recommendation for the board this evening,” he said on Tuesday. 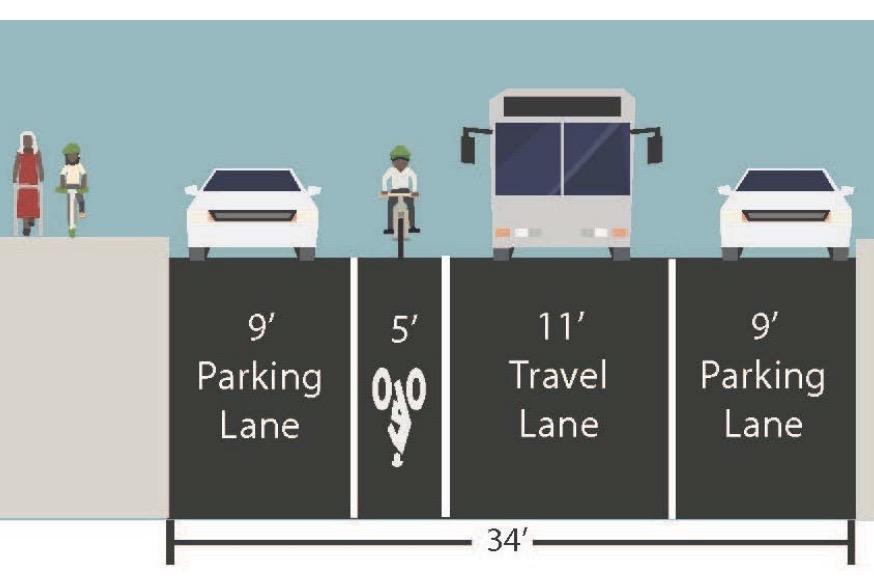 An image from the DOT's plan for the Franklin Avenue bike lane extension shows how the roadway would be split into a single traffic lane, two parking lanes and a bike lane. (Image credit: NYC DOT)

Baptiste and the DOT said the agency is still planning to repave the road, but whether it will include a bike lane is up in the air.

“We are discussing internally the best way to move forward so markings can be installed, making Franklin Ave. safer and efficient for all users,” said DOT spokeswoman Alana Morales.

It’s unclear how or when the road markings will be installed. Morales did not respond to further questions about the project.

Baptiste, however, was direct about the bike lane’s future at Tuesday night’s meeting.

“There is no bike lane going in,” he said.

Franklin Avenue north of Eastern Parkway has had a bike lane since a 2014 redesign of the street. The DOT said injuries for roadway users has declined 44 percent on that stretch since 2014. South of the parkway, injuries have declined 25 percent in the same time period.