CROWN HEIGHTS — A debate over Crown Heights development on Tuesday turned into a shouting match ended by police between the area’s assemblywoman and a fierce anti-rezoning activist.

At a Brooklyn Community Board 9 meeting Tuesday night, Assemblywoman Diana Richardson gave a speech to residents about various development-related issues in the neighborhood, including the controversial redevelopment of the Bedford-Union Armory.

Richardson, a former CB9 member, also took the opportunity to warn residents that, to protect against large developments in the future, the board should look again at studying changing land use rules in the area — alluding to an extremely contentious (and now stalled) push in CB9 for rezoning two years ago.

“In the midst of all this development, Community Board 9, I can’t underscore to you [enough] the importance of doing responsible zoning,” Richardson said.

Following those words, the assemblywoman was shouted down by Alicia Boyd, who with her group, Movement to Protect the People, fought the rezoning plan. She believes it would lead to tall towers on Empire Boulevard, displacement of current residents and a speeding of gentrification — with protests, lawsuits and, in some cases, civil disobedience.

At Tuesday’s meeting, Boyd continued shouting at Richardson for several minutes as she spoke. The assemblywoman, speaking into a microphone, told the attendees to ignore Boyd and “focus on me.”

“We will not be able to do anything once the development — this is static. This is static,” she said, referring to Boyd. “We need to rezone.” 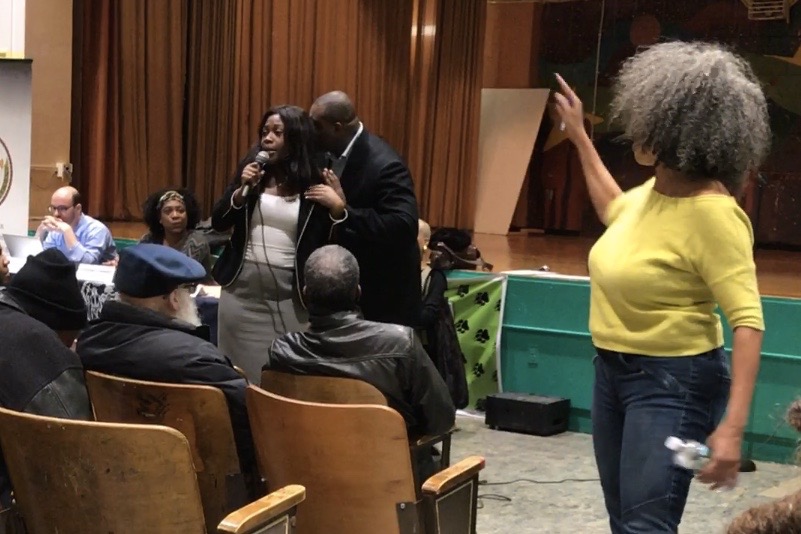 Richardson and Boyd continued shouting at one another for several minutes, a portion of which was filmed by an attendee of the meeting. In the video, Boyd can be heard swearing at the assemblywoman, telling her to “take that sh-t and shove it up your a--.”

The argument ended shortly after an NYPD officer intervened between the women in the back of the meeting room.

This is not the first time Boyd has shouted down an elected officials over rezoning in CB9. During debate of a possible zoning study in 2015, the activist got into a racially-charged shouting match with Councilmember Laurie Cumbo, who asked Boyd "you want to have fisticuffs right here?"

Since the board voted in May of 2015 to officially request the Department of City Planning begin a study of rezoning in the neighborhood, no movement has been made by the city to move forward with the effort.

However, at least two smaller zoning changes have moved forward in the neighborhood recently — one by a group of homeowners on Fenimore Street who want to preserve their single-family homes and another by a developer who wants to build two 16-story towers off Franklin Avenue.

The latter effort, by Cornell Realty, has already attracted the ire of Boyd and her group; at Tuesday's meeting, she and her supporters handed out flyers warning residents the "the shadows are coming," with an illustration of what the new buildings may look like near the Brooklyn Botanic Garden.