Why No Streetcar in Crown Heights? BQX is 'Self-Financed' on the Waterfront

CROWN HEIGHTS — As the city plans a $2.5 billion streetcar for the Brooklyn and Queens waterfronts, a Crown Heights community board was told this week the reason their neighborhood likely isn't getting the same type of infrastructure is because their property values won't rise fast enough to pay for it.

That was the answer from Adam Giambrone, the city's project director for the Brooklyn Queens Connector, or BQX, when he was asked by a local: “Is there any reason we’re investing in this relatively low-demand corridor rather than a super high-demand corridor for transportation like Utica Avenue?”

The BQX will be funded with “value capture” bonds, which count on money from anticipated increased property taxes along a new transit system’s route to pay for the project, Giambrone told the CB8 transportation committee meeting Tuesday.

“This [project] being self-financed creates sort of a unique beast in that regard. But certainly there are many corridors that could benefit from better transportation,” he added.

The hour-long talk covered fares, funding and routes for the BQX, which is planned to run from Sunset Park to Astoria with more than 30 stops in between. 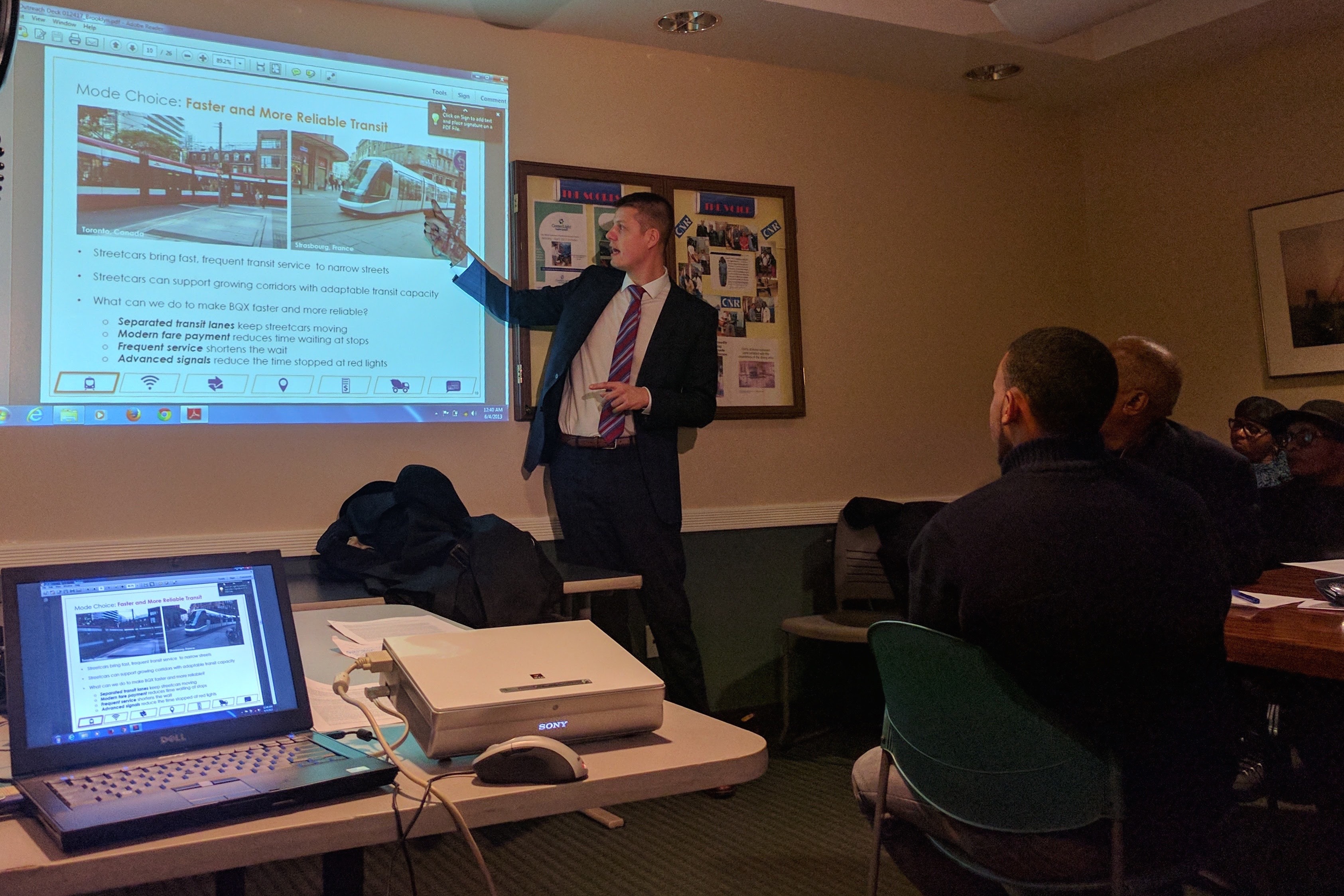 Tuesday’s meeting was one of several Giambrone has attended in past months to meet with the public about the BQX project before his team releases a more comprehensive report in March about its route, stations and operation, he said.

To help you keep track of the project, DNAinfo rounded up the highlights from Tuesday’s meeting below:

► Fares will match the MTA rate — but transfers remain up in the air.

The cost of a BQX ticket will be the same as what riders pay on the subway, Giambrone said. “Whatever it is in 2024 … it would be the same fare,” he said. But the streetcar planners have not nailed down whether BQX riders can transfer for free between the light rail and the separate MTA system, though they hope to make that the case.

“Although we’re eight years out and we haven’t been able to have those detailed discussions yet … our hope would be that you would be able to do a similar transfer,” he said.

► Connections to the subway system are not set in stone.

The BQX planners hope to connect the light rail to the subway system in as many places as they can. Options for where the streetcar may meet the subway system, including Jay Street-MetroTech, Smith-9th Street and Vernon Boulevard.

Giambrone said 400,000 people who “don’t have good access” to transit live along the BQX corridor, and an additional 300,000 travel into the area to work, from DUMBO to the Navy Yard to Long Island City. “We know the connection north south in Brooklyn and Queens isn’t great,” he said.

► Operating costs are on par with local buses, Giambrone says.

The BQX will cost $2.5 billion to build, but Giambrone said there’s no exact figure yet for how much it will cost to operate. (A 2015 BQX Study estimated the annual operating and maintenance cost at $26 million.) Giambrone says his research shows the operating cost “comes in at a cost of a little less than a local bus,” per rider, he said at the meeting.

► The BQX system will need up to 10 acres for a train yard, but no eminent domain will be used on residential homes to get it.

In addition to tracks, the light rail will need between 8 and 10 acres of land for a train yard and maintenance facility, Giambrone said. One resident asked if any eminent domain seizures or “displacement” would be used to create that space.

“I can be very clear, without any reservation: There is not a single piece of land that we have looked at where there are residents. There will be no eminent domain or purchasing of residential properties. … This is an industrial maintenance facility. It is not appropriate in a residential setting,” Giambrone said.

There is a long way to go before the streetcar will materialize. In the near future, the BQX team will release another, more thorough plan for the light rail, which will need a City Council review and environmental impact statement, Giambrone said. If all goes well, construction could start in 2019 with an opening date estimated for sometime in 2024.

Giambrone is set to do a second question-and-answer session on the BQX project this week. The Economic Development Corporation is hosting a phone-in town hall meeting Thursday night with the streetcar project director. All who are interested can call into the meeting using the pin 115628 at (877) 229-8493 at 6 p.m. For more information, visit the EDC’s BQX website.